A real-life Rapunzel has revealed the secret behind her ankle-length strawberry blonde locks – eating peanut butter.

Andrea Colson, 33, who was born in the US but now lives in Micronesia, credits a daily spoonful of the nutty spread for her glossy, 64-inch tresses – which are longer than five rulers.

The Christian missionary also massages coconut oil into her hair twice a week, and says she only trims the ends to keep them in good condition.

It takes 30 minutes for Andrea, who says Disney’s Rapunzel is her inspiration, to plait her hair and she uses special hair ties to contain her thick locks.

She has been growing her now foot-skimming mane since she was little, and regularly gets stopped in the street by admiring strangers.

Andrea Colson, 33, has 64 inch hair that she maintains by eating daily spoonfuls of peanut butter 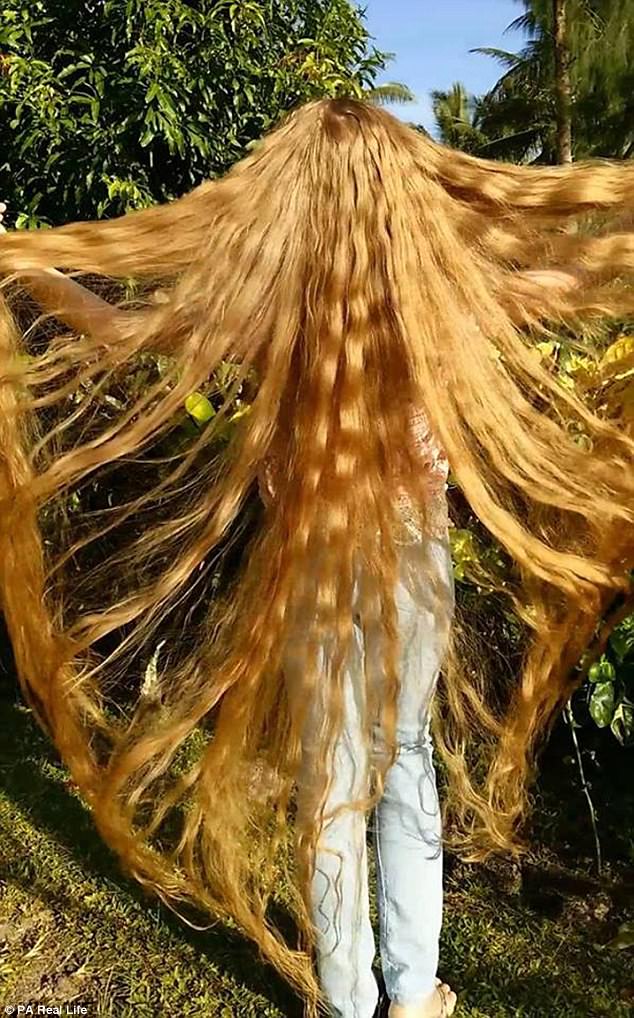 ‘People ask the same question – is it real?’ said Andrea.

‘But it is, both length and colour. I’ve never dyed my hair, which I think has helped keep it healthy.

‘I’ve never had any negativity. Mostly, people are very sweet. They often compare me to Rapunzel, which makes my day.

‘The film Tangled is my hair inspiration.’

Andrea, a Christian missionary who works with children, has had long hair virtually her whole life.

At just two years old, it skimmed her shoulders, and by the time she was a teenager, it was knee-length.

She says she likes it best ankle-length, though – a style she’s worn for the past seven years.

To keep her hair in top condition, she trims every three to four months, only cutting off the ends to prevent them getting thin and straggly.

‘The most I’ve ever had taken off is a few inches,’ she said.

‘I don’t want it to look tapered at the bottom. I’d prefer it to be thick and even.

How Andrea looks after her 64-inch hair

‘I don’t have a proper schedule, but if it starts to look uneven, I get a trim.’

Another of Andrea’s secrets is coconut oil, which she massages through her hair and allows to sit for around an hour before washing, which she does twice a week.

She just uses regular shampoo, but only conditions the ends of her hair, as she finds doing so to her scalp causes her locks to become brittle.

She also swears by only using cold water to wash her hair in.

In fact, aside from straightening it once or twice a year, which takes around 45 minutes, and blow drying her fringe every day, she doesn’t apply any heat to her hair whatsoever. 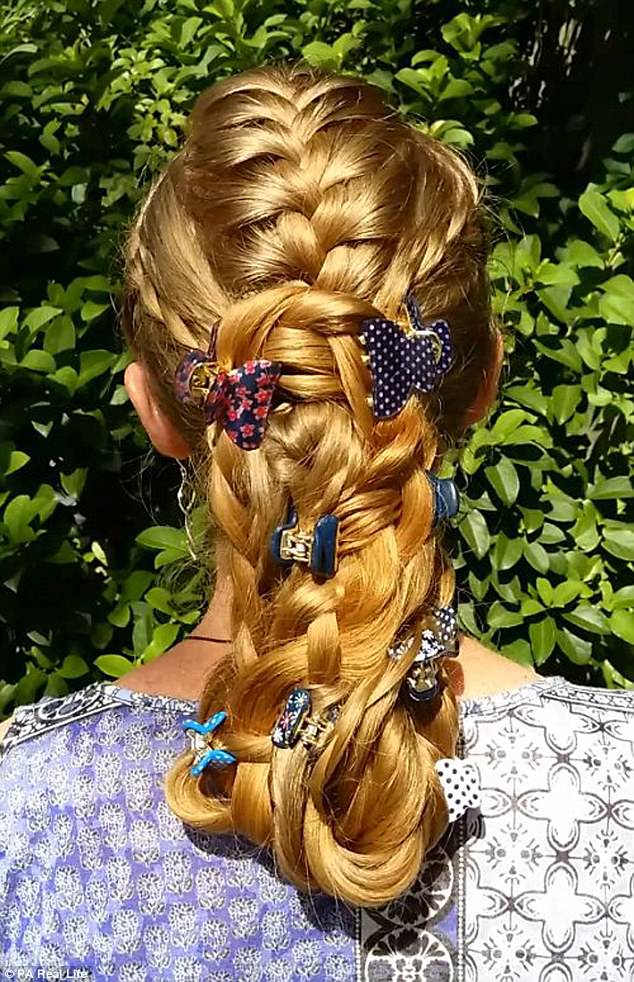 ‘I think heat dries it out,’ she said. ‘I also often wonder if island life has helped keep it in such good condition, as I can wash it in rainwater.

‘Once a month, I make a special hair mask for myself out of egg, coconut oil and olive oil.

‘I think the peanut butter has definitely helped. I notice my hair becoming dry and brittle if I haven’t eaten any.’

Usually, Andrea washes her mane at night, draping it across her pillow and down to the floor, so it can dry as she sleeps – although sometimes, it can take several days for all the moisture to go.

She also struggles to wear it in a ponytail, as it’s so long, and buys special hair ties to accommodate its hefty five inch circumference, when bunched. 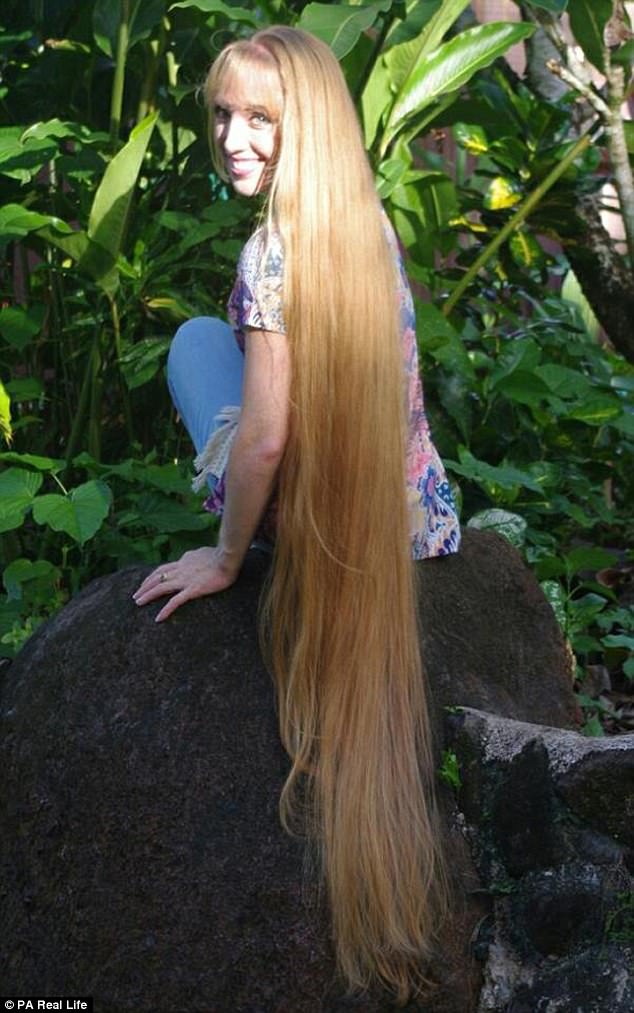 Most days, single Andrea fashions her locks into a bun or plait, which can take 15-30 minutes, depending on the complexity of the style.

‘It’s hard to keep it up in just one clip of bobby pins, so I have to use a variation of different things to keep it all in place,’ she said.

‘I’m so used to long hair that I don’t find it difficult to manage.

‘I’ve come up with little tips and tricks to help me. For example, if I’m braiding it and can’t reach the bottom, I’ll just wrap it around my neck and that works fine.’

Luckily, Andrea has only had one bad experience with her long hair, which happened several years ago. 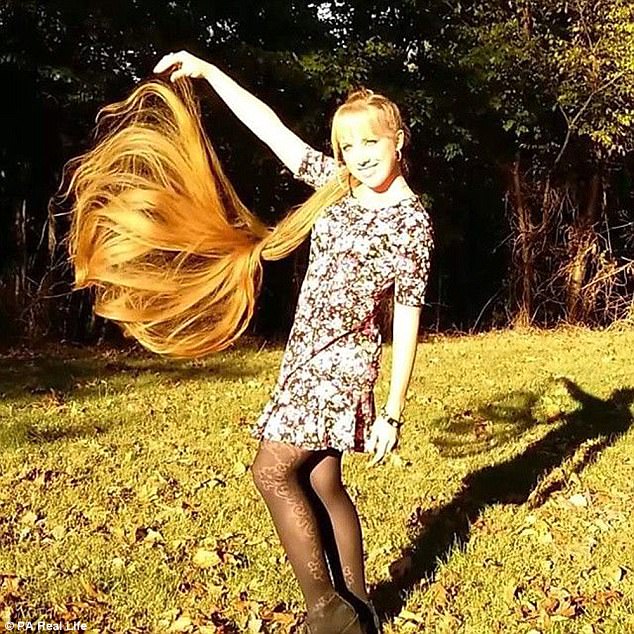 After leaving her hair down whilst snorkeling, coral and sand became tangled, creating a huge knot at the nape of her neck.

It was so matted that hours of combing, coating it in oil and even WD40 – an industrial lubricant – didn’t help, so instead she was forced to cut away the knots.

Since then, she’s vowed to always keep her locks in perfect condition.

Reflecting on whether she would ever cut them off, she said: ‘I can’t see that happening.

‘It would be like cutting off a body part. My hair is what makes me unique.

‘It’s my canvas. I can’t draw, but with my hair, I can create styles that are my own artistic expression.’ 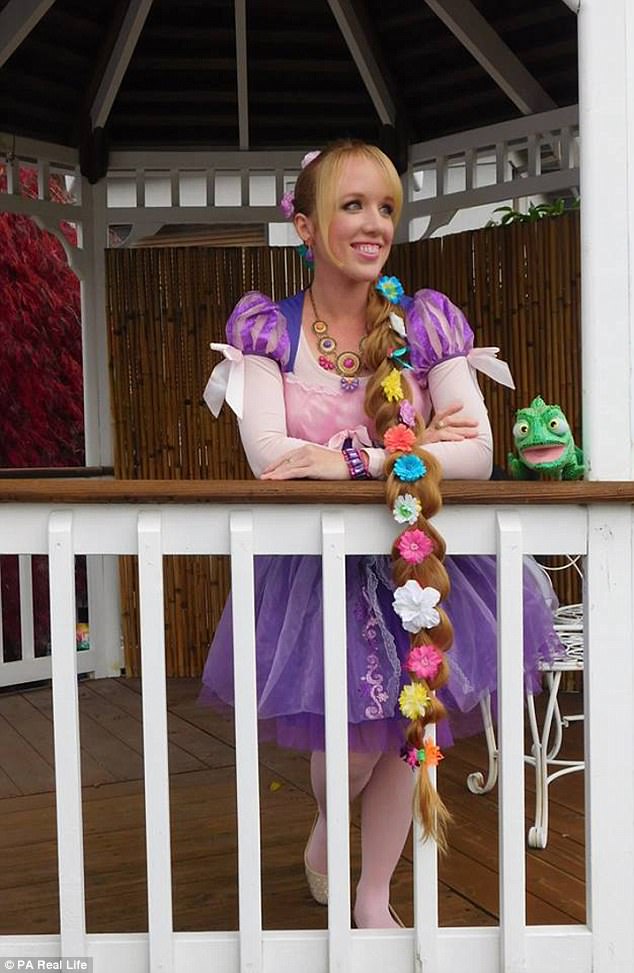