Real Madrid are limping towards next week’s World Club Cup, fourth in the league and now smarting from their worst home defeat in the Champions League.

This was not meant to happen to the winner of the last three European Cups – even allowing for the departure of Zinedine Zidane and Cristiano Ronaldo.

Wednesday night’s loss was the first time they had lost by three goals at home in their history in the big European competition. 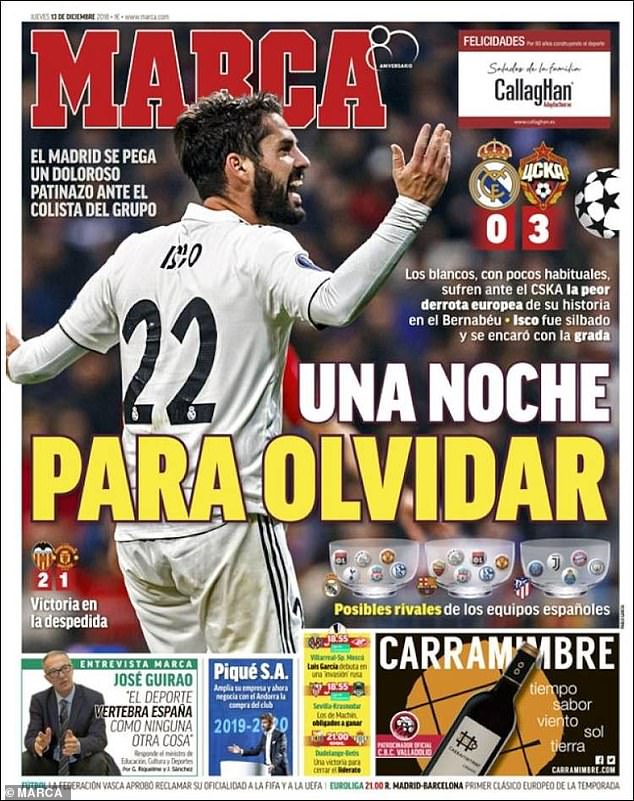 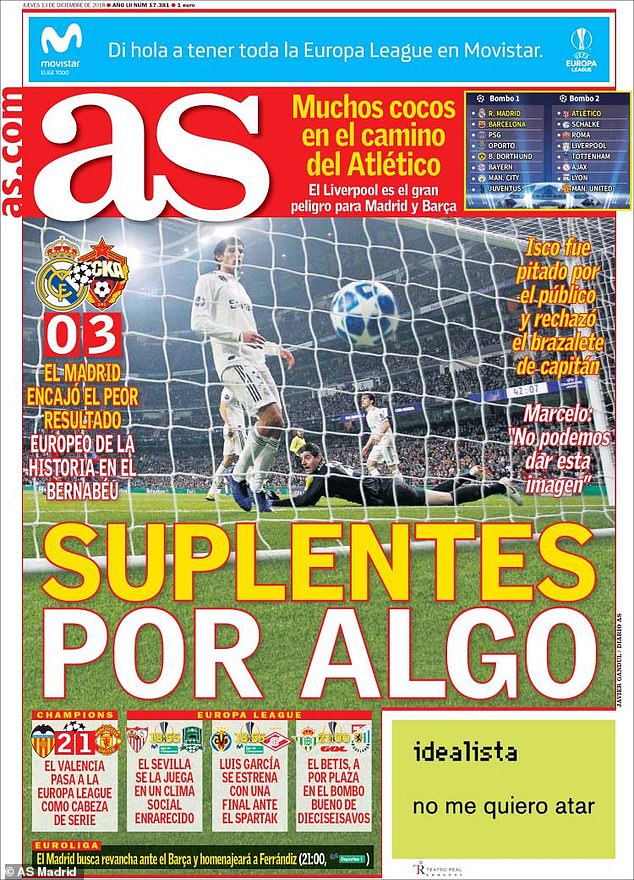 They were already through and the team was filled with reserves but the previous night Barcelona came through the same scenario with a draw against Tottenham. Thrashed by the team that eventually came bottom of the group looked bad.

Isco is the club in microcosm – talented but underperforming and in permanent conflict. On Wednesday night he took on the supporters – the fans who have always stuck up for him when coach Santiago Solari has left him on the bench.

‘What!? What do you want!?’ he was lip-read has having shouted at the supporters behind the goal after scuffing one shot wide. He then declined to wear the armband when Marcelo went off in the second half.

Marcelo sought him out because by virtue of longevity at the club he should have been captain once the Brazilian went off.

Marcelo was asked why Isco never took the armband leaving him with no choice but to give it to Dani Carvajal. ‘I don’t know,’ he shrugged. 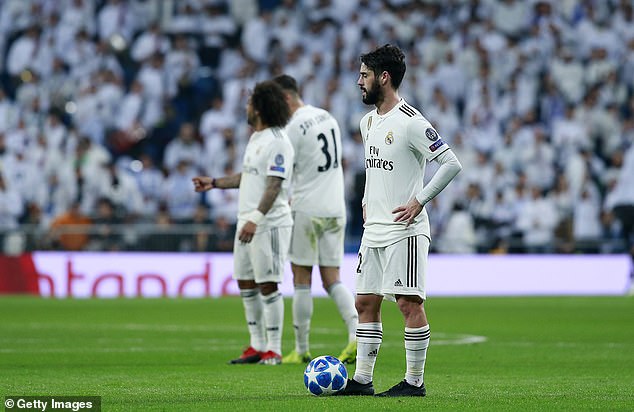 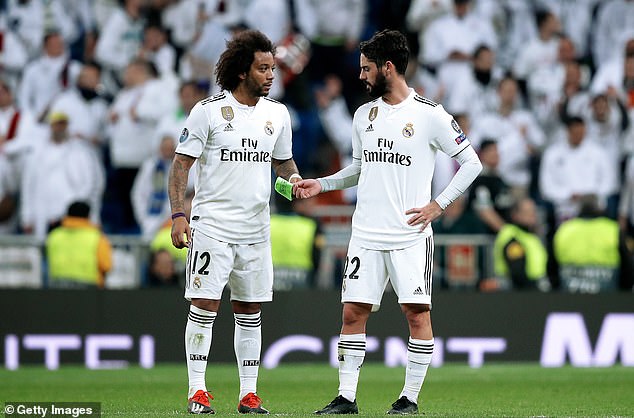 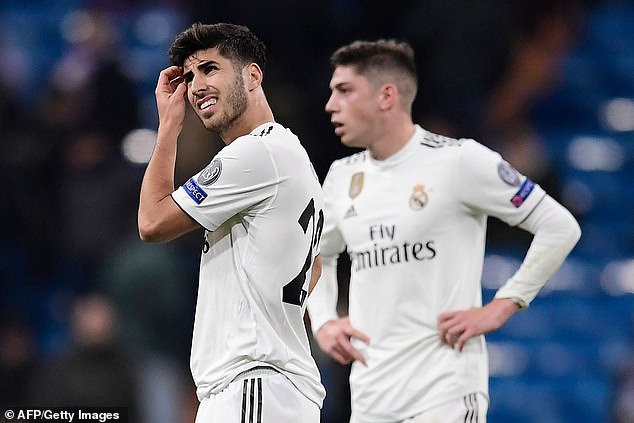 Isco and Marco Asensio were part of the reason why the club did not buy Eden Hazard last sumer. Madrid felt signing the Belgian from Chelsea would block their path to the first team.

Both players find themselves out of favour which is why they came in for Wednesday’s dead rubber.

Asensio is the great young hope of Spanish football but he has stopped developing. He does nothing now that he didn’t do last season or the season before and worse still he has lost his confidence to shoot from distance which was his greatest virtue.

He has also failed to improve his work without the ball. He was guilty of failing to back track again Madrid won the ball back just 46 times – their second worst number for won tackles of the season.

The other reason why Hazard was not signed after the World Cup was president Florentino Perez’s preference for the purchase of Neymar. 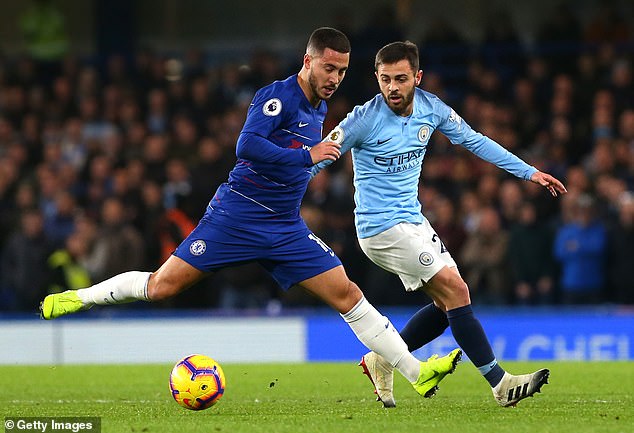 He would have bought Neymar in the summer but the Brazilian’s camp felt it was the wrong year to make the move. He would have been arriving just as Cristiano Ronaldo was leaving and with the responsibility of filling his shoes.

Had he won the World Cup he could have arrived as the all-conquering hero but after a poor tournament he felt deserting Paris after just one season would be the wrong move.

Madrid president Perez was not too perturbed. Getting the player out of PSG would have been difficult. Next summer, as the club understand it, he can be signed for the same money the Ligue 1 side paid for him.

But Perez is increasingly isolated in wanting Neymar and it is no coincidence that as Madrid, as an institution, ponder the benefits or otherwise of spending so much on Neymar, the player himself seems to have opened up to the possibility of an unlikely Barcelona return or a spell in the Premier League. He is aware his ticket out of PSG is no longer guaranteed. 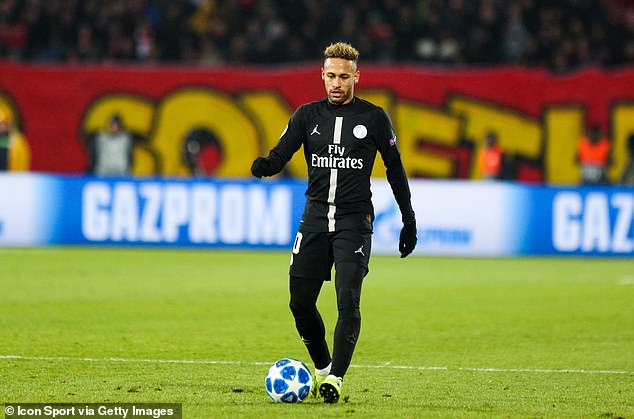 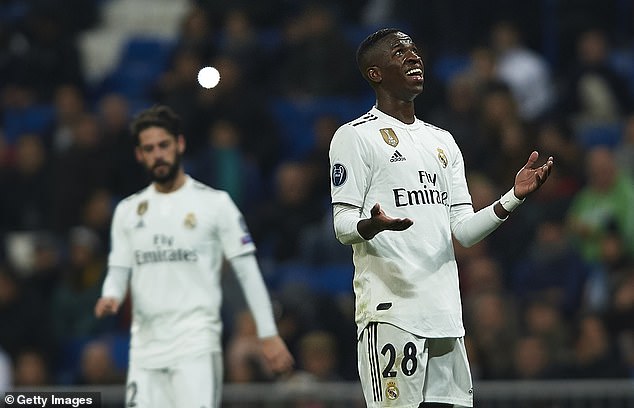 It leaves Madrid reflecting on the fact that they did not buy Hazard because they believed in Isco and Asensio, and because they were holding the chips back to lump them all on the Brazilian No 10 but that subsequently Isco and Asensio have not delivered and Neymar may never actually arrive. It will have been a strangely wasted summer if things turn out that way.

Trusting in youth maybe the way out of the malaise. Vinicius Junior was the only player who looked switched on Wednesday night and his performances under Solari have suggested he has the nerve to go with his huge talent.

The club are also very serious about signing Brahim Diaz, 19, from Manchester City. Midfielders Fede Valverde, 20, and Marcos Llorente, 23, Alvaro Odriozola 22, and Rodrygo, 17 are other young stars around which the club’s future can be built. Exequiel Palacios, 20, could also arrive from River Plate in January. 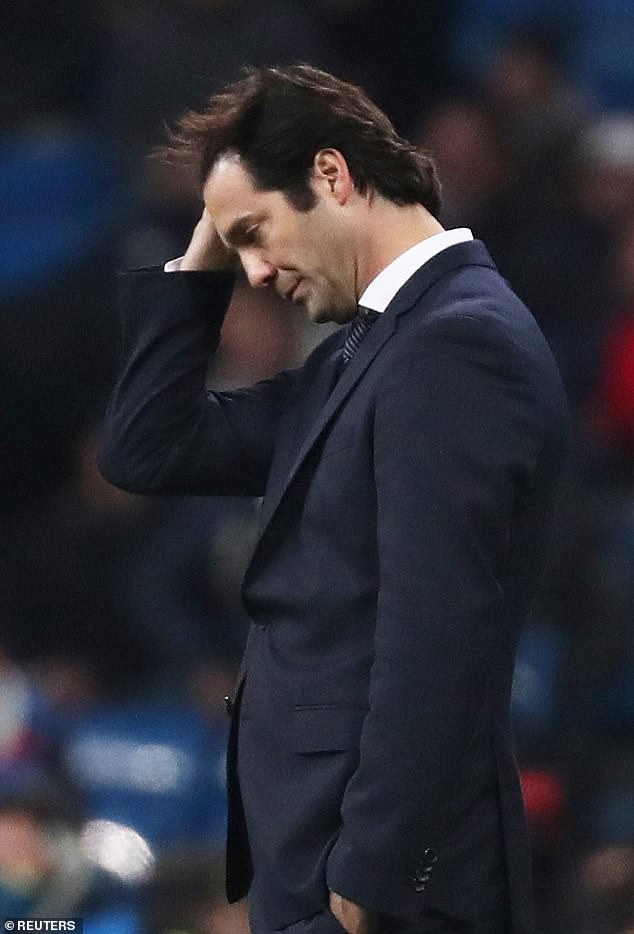 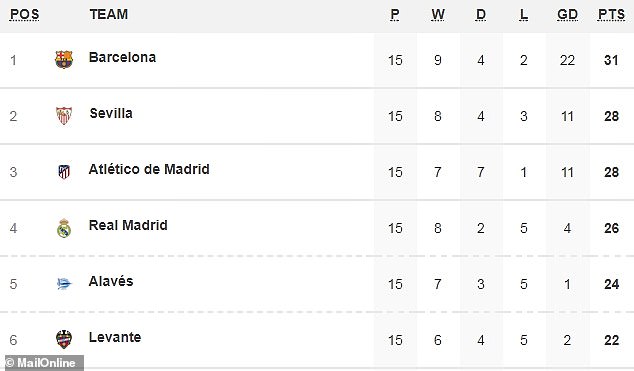 Real sit fourth in the La Liga standings, some five points behind rivals and leaders Barcelona

In the second two-thirds of the season Solari must stake his claim to be the coach that takes charge of that young revolution and the likes of Asensio and Isco have between now and the summer to show that they want to be part of it and not makeweights used to raise transfer money in the summer.

There will be a market for both in England, particularly for Asensio whose game suits the Premier League more than Isco’s.

But supporters will not sit back and allow the season to peter out miserably just because next season carries greater promise. Madrid face Rayo Vallecano on Saturday and then they are off to contest the World Club Cup.

They need to go into 2019 with that trophy in the cabinet or there will be trouble head for the players and the coach.