Zinedine Zidane nostalgia has been in overdrive in Turin in the last couple of days. The staff at Ristorante Da Angelino even had his old table set for him in case he dropped in for old times’ sake.

‘He used to come in here almost every day,’ the son of the owner, Angelo, told television reporters who had headed straight there from Madrid on the eve of the game.

The walls are still covered with pictures of Zidane with a full head of hair and still yet to score the goal that would define him more than any other – that dipping volley from Roberto Carlos’ far from perfect pass in Glasgow. 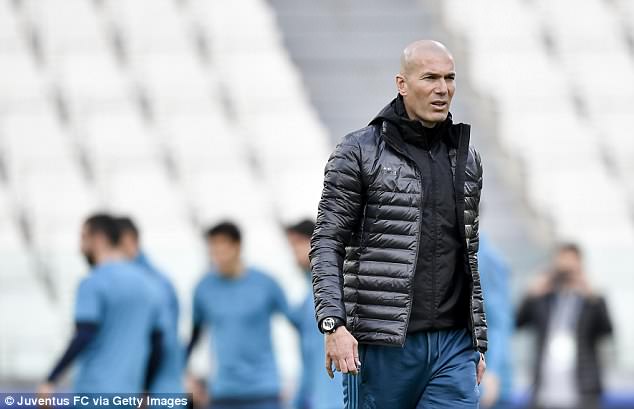 The goal that justified Real Madrid president at the time – and current president in his second spell – breaking the transfer record to sign him.

‘I learned a lot in my five years at Juventus,’ he said. ‘It was a huge change for me when I left France and they took my under their wing. I have great memories of growing as a player and a person.’

He was asked if Juventus’ status in Serie A and their never-say-day will to win makes them the Madrid of Italy. ‘It does,’ said Zidane. ‘They have the same DNA. It was here that I learned to fight to the finish in every game.’

Turin was clearly the making of Zidane. It was where he became a father to his second son Luca.

It was where he made lasting friendships with personalities such as Edgar Davids who used to take him to a park in the San Salvaro neighbourhood in the South East of Turin to play football with African immigrants. 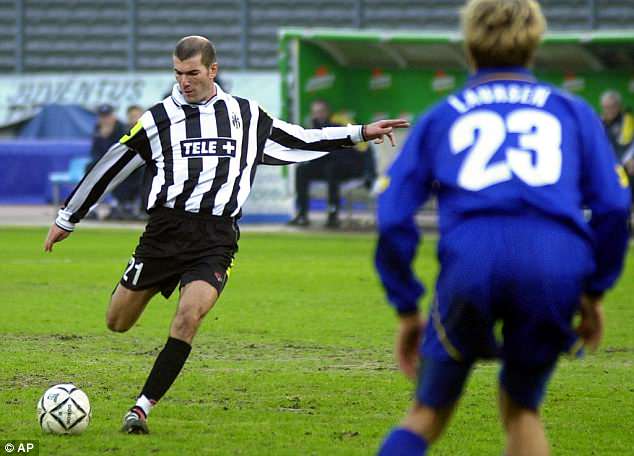 Zidane returns to Juventus as a legend, having impressed in their midfield as a player 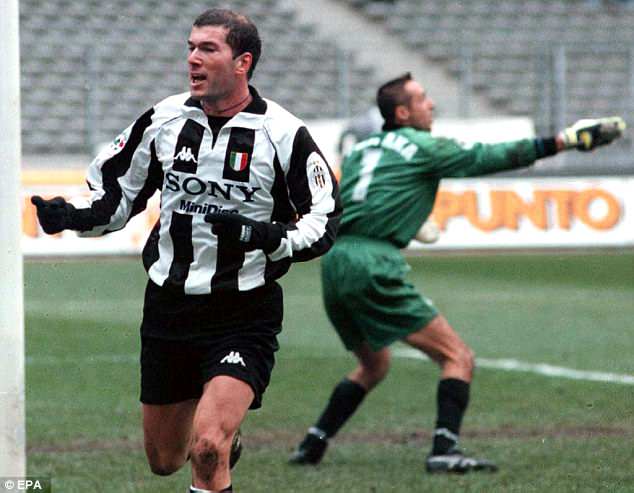 And it was also where he crossed paths with Roberto Falvo – who he met at the Ristorante Da Angelino – and eventually took to two World Cups as France’s team chef.

When he turned up at Madrid in 2001 and was whistled after a few subdued early performances it was because of his experiences at Juventus that he was able to handle the pressure.

He could cast his mind back to those park games with Davids telling him to just enjoy himself and stop worrying about the fact that they had a Serie A match the following day, and take everything in his elegant stride.

His laid-back demeanour became his trademark on the pitch and he has taken it with him into the technical area, not flinching once since taking over despite the fact that league form led to speculation earlier in the season that he would be replaced this summer.

After schooling Unai Emery in the win over Paris Saint-Germain in the last round he looks set to stay at the club. Even if Real Madrid go out against Juventus there is a feeling now that the players will carry the can and he will be given new recruits in the summer to go again. 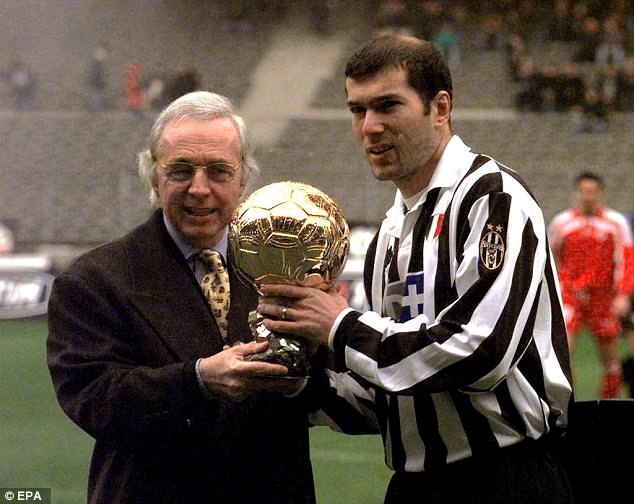 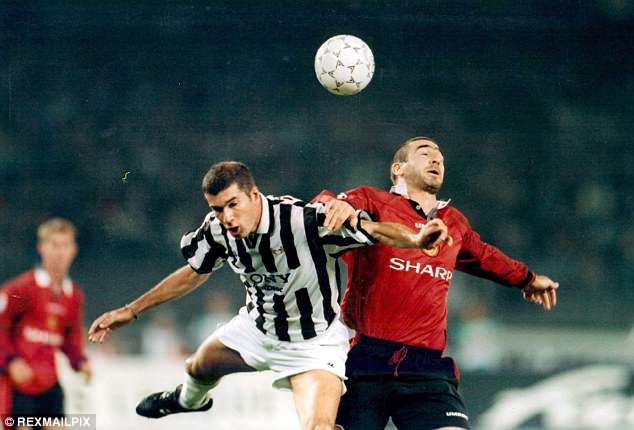 There is still pressure on him to get things right against his former club of course. And if he does he will be 180 minutes from a third consecutive final and the prospect of three straight European Cups.

He was slightly caught out in Monday’s press conference because after saying that the 2017 Champions League final win over Juventus had nothing to do with this double-header he was then asked what had changed in his own team since that win 10 months ago.

‘Not a lot’ was his answer. ‘Most of the players are the same.’

If the players are the same then surely the match last June can be a precedent. He certainly looks set to name the same XI with Isco back in the team after his brilliant performance last week for Spain against Argentina.

And Gareth Bale looks set to be back on the bench despite his two goals at the weekend. 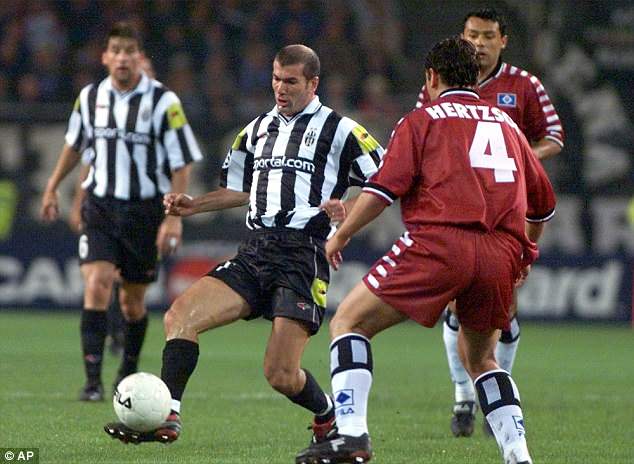 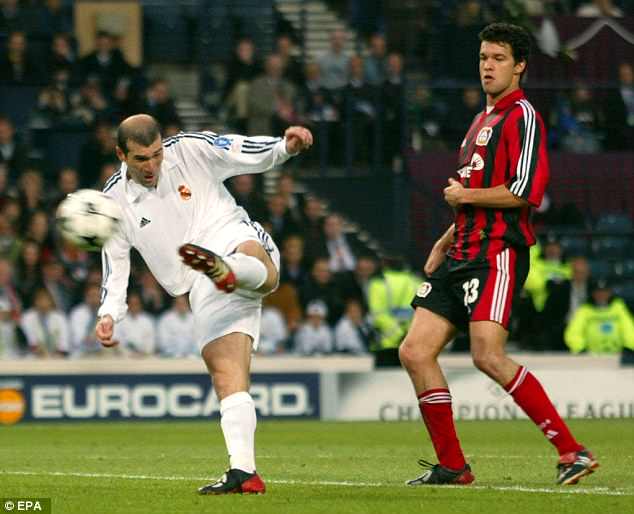 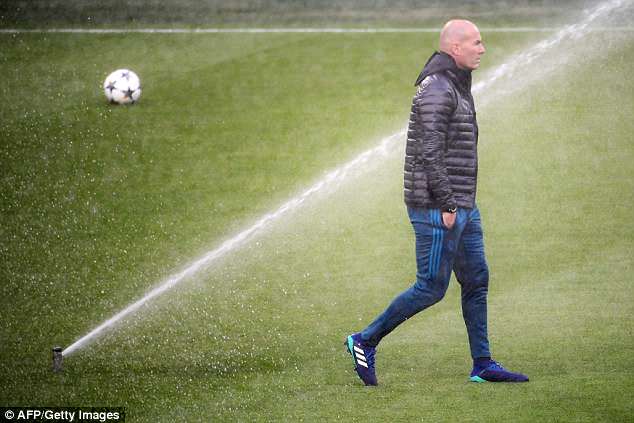 There was real sincerity when Zidane was asked about leaving out the likes of Isco and Bale in recent weeks and he said that they should not see it as him having a lack of confidence in them.

There were enough minutes to be shared around and all the players are important.

That may well be the case over these two legs. Just as against PSG it was first leg subsitutes Marco Asensio and Lucas Vazquez who were decisive so the same pair or Bale could be key even if they don’t start.

Zidane never had a lot of luck in the European Cup at Juventus. In 1998 he was on the losing side in Amsterdam against Real Madrid. ‘I don’t remember much about the game, just that we lost,’ he said on Tuesday.

He’s been winning this competition ever since and his march towards another final has taken him over familiar ground this week.

He has been welcomed back to the club where he first made his name. If he knocks them out of the Champions League he could be on his way to making some extraordinary history.