Real Madrid News: Spanish giants would have to fork out £70MILLION to sack Zinedine Zidane

It would cost Real Madrid £70million to sack under-pressure boss Zinedine Zidane after their troubled start to the season.

The Frenchman returned to the dugout at the Bernabeu in March, but struggled to get his team firing again as the campaign fizzled out.

He has now been beset by the same problems this term, with Wednesday’s 3-0 defeat by Paris Saint-Germain in the Champions League highlighting a disjointed team.

Those in charge at Real have never been afraid of pulling the trigger on any manager, but it is thought that the financial implications of getting rid of Zidane could make them think twice on this occasion.

According to Sport, It would set back the Spanish giants a whopping £70m just to get rid of the former World Cup winner.

Zidane signed a three-and-a-half year deal back in March that would earn him a net payment of £11.5million each season. With three years remaining on the contract, the payout would be in the region of £35m, a figure that would come at a gross payment of £70m (€80m) to Real. 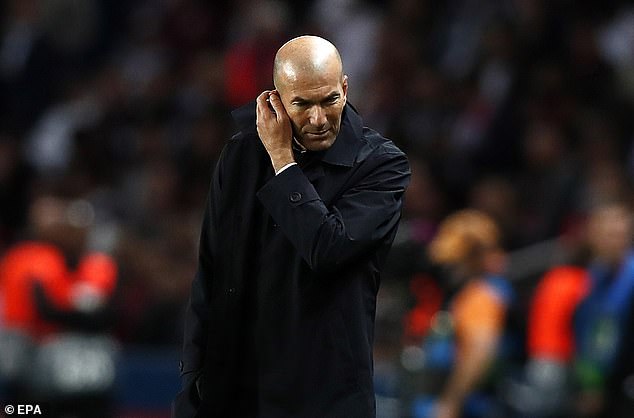 The defeat in Paris on Wednesday has been labelled Zidane’s worst ever result at Real Madrid boss, and the focus was on the former Galactico yet again on Friday morning.

In the Spanish press, Marca dedicated their front page to his current predicament, using a picture of the Real boss looking deflated, along with the headline ‘In the Spotlight’.