‘He plays well in every sense’: Real Madrid boss Zinedine Zidane heaps praise on Rodrygo after his hat-trick against Galatasaray… but admits he cannot put ‘pressure’ on talented teen

The 18-year-old former Santos striker scored twice within the opening seven minutes at the Bernabeu Stadium and completed his treble in stoppage time to cap a fine evening’s work.

In addition, he had earlier set up Karim Benzema to score the first of his two goals after skipper Sergio Ramos had converted from the penalty spot.

Benzema’s second was his 50th goal for the club in the competition and helped set up a showdown with Group A leaders Paris St Germain in Spain in three weeks’ time.

The French side will head into the game five points better off than their hosts, but knowing Zidane’s men have put a slow start to their European campaign firmly behind them.

Asked about Rodrygo’s performance in the press conference after the game, Zidine said: ‘We are happy for him because in the end when he gets the chance to play he plays well, and he did so again tonight.

‘He plays well in every sense. We know his qualities in attack well, but he also works hard in defence and helps out with a lot. 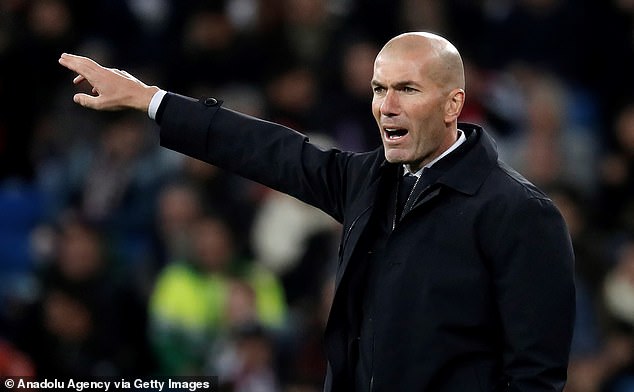 ‘But we need to keep calm and not put any pressure on him.’

Rodrygo needed just four minutes to fire his side in front, and he helped himself to a second just three minutes later with a fine header, full-back Marcelo providing the ammunition on both occasions as Galatasaray were picked off repeatedly at the back.

Their fortunes took a further turn for the worse when, having been invited to review Steve Nzonzi’s challenge on Toni Kroos on the edge of the box by the video assistant referee, German match official Felix Zwayer pointed to the spot. 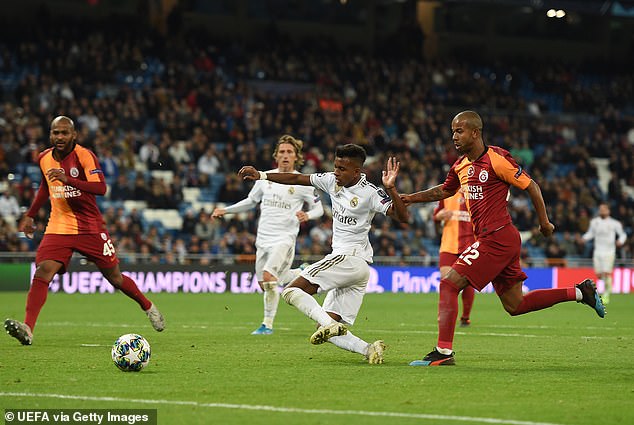 Ramos resisted the temptation to allow Rodrygo to complete a quick-fire hat-trick, dinking the resulting penalty over keeper Fernando Muslera to make it 3-0.

The Brazilian teenager turned provider on the stroke of half-time, capitalising on yet another error by the Galatasaray rearguard to hand Benzema the simplest of chances to make it 4-0.

Benzema passed up two opportunities to add to his tally as time ran down, but he made no mistake when he tapped home Dani Carvajal’s 81st-minute cross from point-blank range to complete a personal half-century before Rodrygo completed the rout from the Frenchman’s through-ball.