Real Madrid train in Cyprus ahead of Apoel Nicosia test

Zinedine Zidane lead his Real Madrid players through a training session in Cyprus on Monday night as they look to kick-start their Champions League campaign against Apoel Nicosia.

Cristiano Ronaldo trained alongside team-mates Karim Benzema and Luka Modric among others ahead of Tuesday’s encounter, which represents a first chance to seal a place in the knockout stages.

But earning a spot in the round of 32 is not the only reason why they are aiming for a big win against Apoel, with Zidane admitting he wants to reassert their dominance after a poor start to the season, which included a 0-0 draw with rivals Atletico Madrid in La Liga last weekend. 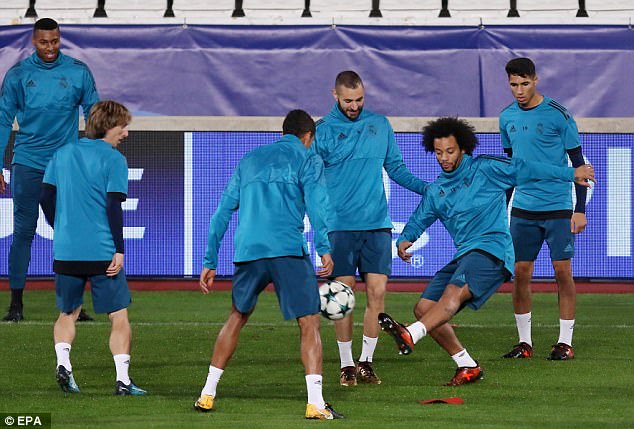 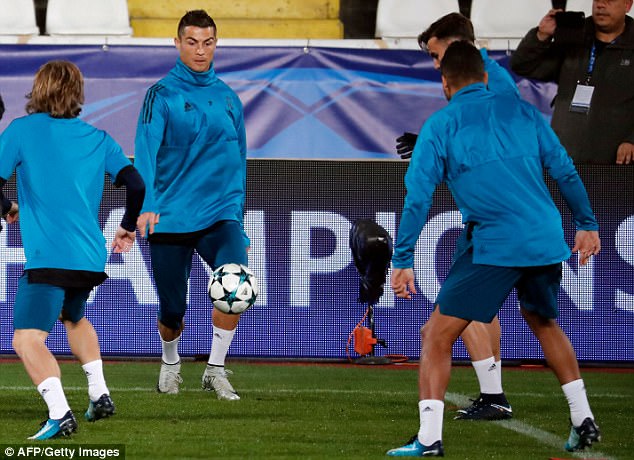 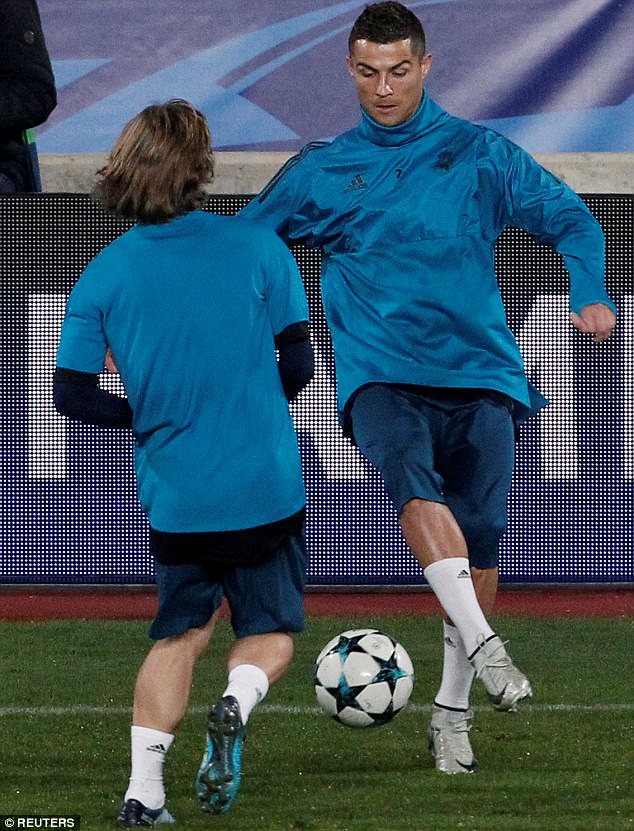 ‘We want to show the same determination we demonstrated against Atletico. We are one step away from the last 16 and tomorrow we want all three points,’ said Zidane.

‘It’s not going to be an easy game. they’re a club who are doing really well in the Champions League.

‘They deserve to be in the Champions League and when they came to the Bernabeu they played very well. It will be a difficult game tomorrow and we have to be prepared.’

Real head to Nicosia having found life domestically and in Europe far from comfortable in recent times.

A shock defeat to Girona and the derby draw with Atletico have left them 10 points adrift of leaders Barcelona, while a 3-1 loss to Tottenham in their last Champions League outing means the holders still have work to do to qualify for the last 16.

However, a victory over Group H minnows Apoel would ensure Real will be through to the knockout stages for a 15th successive season. 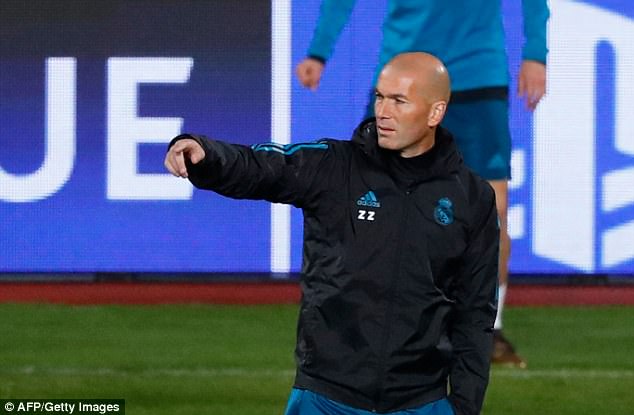 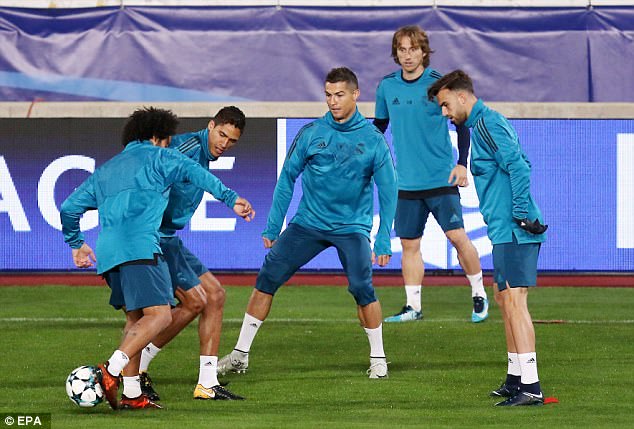 A draw at the GSP Stadium might also be enough for Real – should Borussia Dortmund fail to beat already-qualified Spurs – but limping through courtesy of results elsewhere will do little to answer the growing question marks surrounding the Spanish giants.

Among the criticisms levelled at the Real is the performances of star forwards Cristiano Ronaldo, Karim Benzema and Gareth Bale, with the trio having scored just four LaLiga goals between them this season.

Ronaldo, Real’s all-time record scorer, has just one of those goals but he has netted six times in four Champions League outings.

Real will be without Bale and goalkeeper Keylor Navas once again, while captain Sergio Ramos is unavailable after breaking his nose in the derby.

With a five-point gap to Real, Apoel coach Giorgos Donis says his club need to be realistic about their European ambitions and admits their main goal is to try and pip Dortmund to third place, with both clubs currently level on two points. 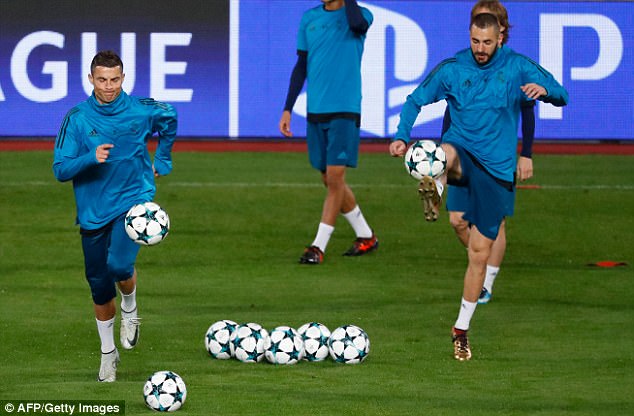 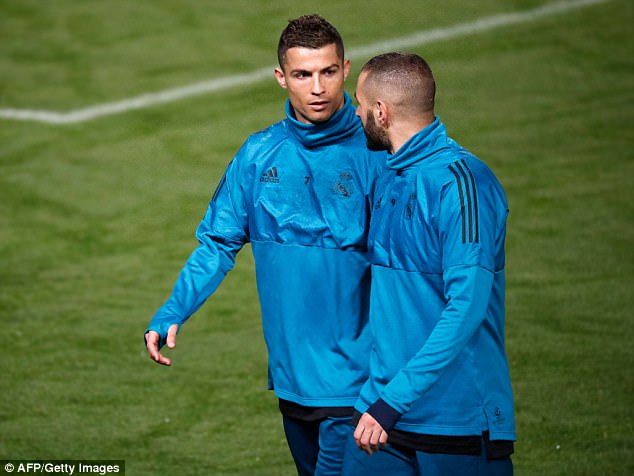 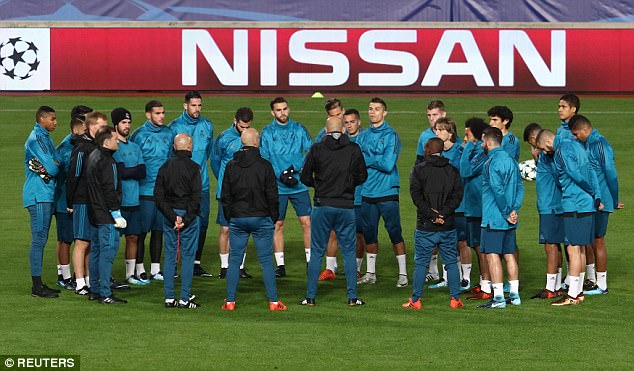 That does not mean wounded Real will be given a free ride, though, with Donis telling a press conference, as reported by AS: ‘We must be very focused, and have respect but not fear.

‘You need to have courage for this game, it’s our last Champions League game at home and we need to give our best, give the fans something to be happy about.

‘We have to be realistic, but we’re going to fight like we did against Borussia and Tottenham.

‘Personally I’m more interested in the result of the other game, to know if we have a chance of getting in the Europa League.’