Ray Clemence’s shirt from the 1981 European Cup final is still in mint condition 37 years on.

According to its proud owner Agustin Rodriguez – who was the 21-year-old rookie Real Madrid goalkeeper who faced Liverpool on the night – it was in pretty good nick when Clemence handed it over at the end of the game.

‘I think I washed it just for the sake of it because it was spotless,’ he laughs. ‘Clemence didn’t have to throw himself down on the ground once.’

Agustin Rodriguez, Real Madrid’s goalkeeper in their 1981 European Cup final defeat to Liverpool, shows off the green jersey given to him by opposite number Ray Clemence 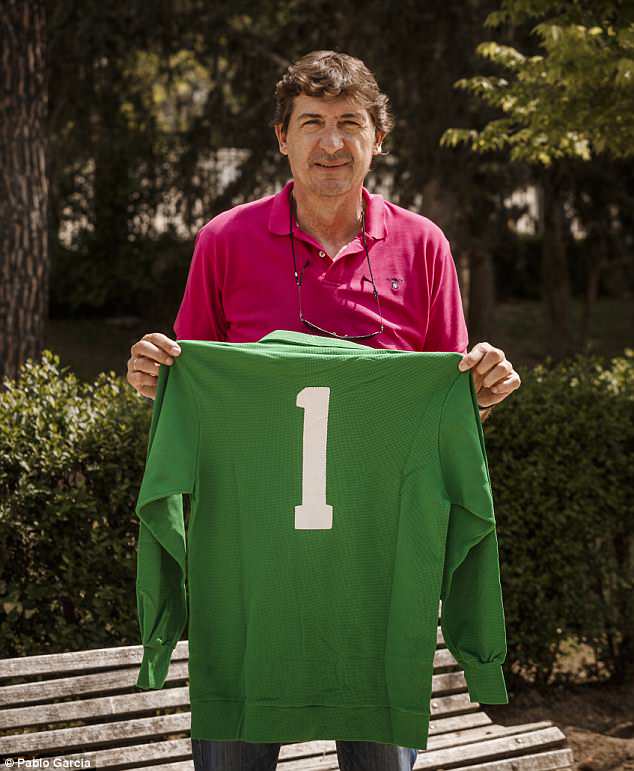 Inspecting the ‘100% Nylon’ label and the yellow liver bird crest one more time Agustin recalls saying ‘congratulations’ in his best English and asking for the jersey – the last Clemence wore for Liverpool before he moved to Tottenham.

‘I asked to change shirts and he was very nice. He was a lot more experienced than me and a great goalkeeper,’ says Agustin.

If that’s the good memory from the Parc des Princes, the not so good memory comes with eight minutes remaining of the final.

Sat in a Madrid park cafe on a warm spring morning sipping his ‘expreso’ Agustin can still see Alan Kennedy looming large in front of him.

And he still curses making the slightest of movements in the wrong direction as the Liverpool left-back took aim. 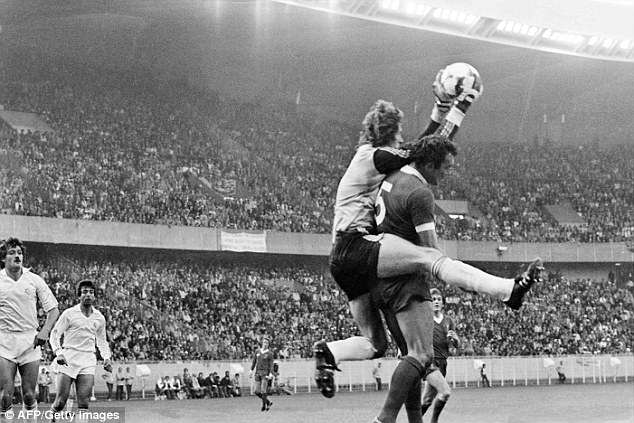 ‘They took a quick throw and our defender [Rafa Cortes] tries to clear the ball,’ he says. ‘But it bounces and he misses it and Kennedy is now five yards in front of me and for a tenth of a second I go towards my left post anticipating the ball is going to be pulled back.

‘If I had not moved then I would have blocked the shot but you sense that movement in the area and you react. I tried to cut out the cross but he shoots and he hits it so hard it flies past me.’

He swishes his left hand over his right shoulder mimicking the way Kennedy’s missile whistled past him.

‘It had been a very tight game with few chances. We knew whoever scored first would probably win the European Cup and that is how it was.’

As Liverpool prepare for Real Madrid again almost four decades later, now as the clear underdogs, what stands out from Agustin’s memories is how different things were in 1981. 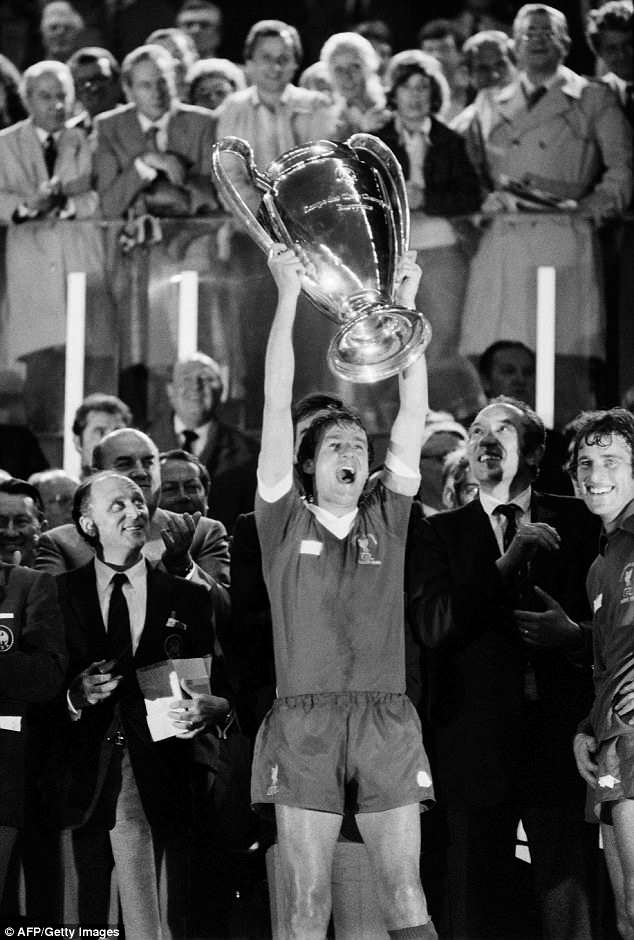 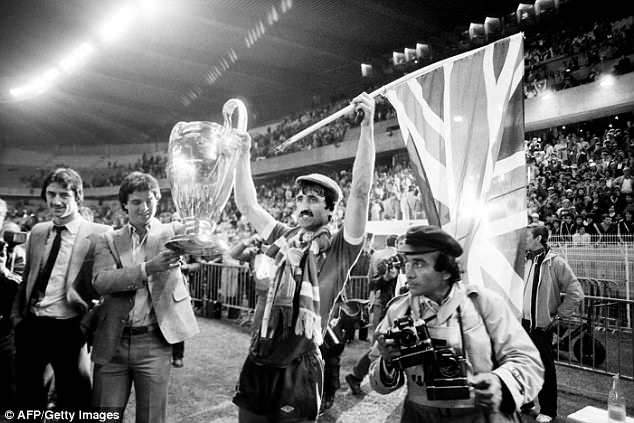 Almost everybody thought Liverpool would win, even Pele.

‘I was at a lunch with Pele a couple of weeks before the final and he had made Liverpool favourites,’ Agustin says.

‘We were Madrid! But Pele said: ‘No, no, the favourite is Liverpool.’

I said ‘Madrid always delivers,’ but he said: ‘Well Madrid has gone 15 years without even playing a final.’

Madrid were so unfancied at the time that the club still paid out bonuses to players after the defeat because they were grateful to have at least reached their first final since 1966.

‘Even though we lost we got around half a million pesetas I think.’

What could a player buy with that amount of money in 1981? ‘A little Fiat or a Ford Fiesta maybe,’ he laughs.

‘Now winning a Champions League you could buy a decent apartment in Madrid. Between half a million pesetas and half a million euros there is a big difference.’ Real may be favourites to win this Saturday, but Agustin recalls them as underdogs in 1981

Liverpool’s superiority on the pitch was a reflection of their healthier financial state off it.

In 1979 they had signed a deal with Hitachi – the first shirt sponsorship of its kind. Madrid had no shirt sponsor and had only just started using a major global brand kit supplier.

‘That was the first game we played with the stripes down the arms of the white shirt,’ says Agustin. ‘Madrid had signed with Adidas because the material of the shirts before was so horrible.

‘We played that final with the stripes and the purists were up in arms. How could Madrid play with shirts like this?

‘Of course it would not be long before we had Zanussi in big letters across the front. Things were changing. But the English clubs were ahead of the rest of Europe.

‘There were more supporters in English football and that is what counted at the time.

‘Spectators in stadiums used to make up 90 per cent of a club’s income, now it’s barely 10 per cent. 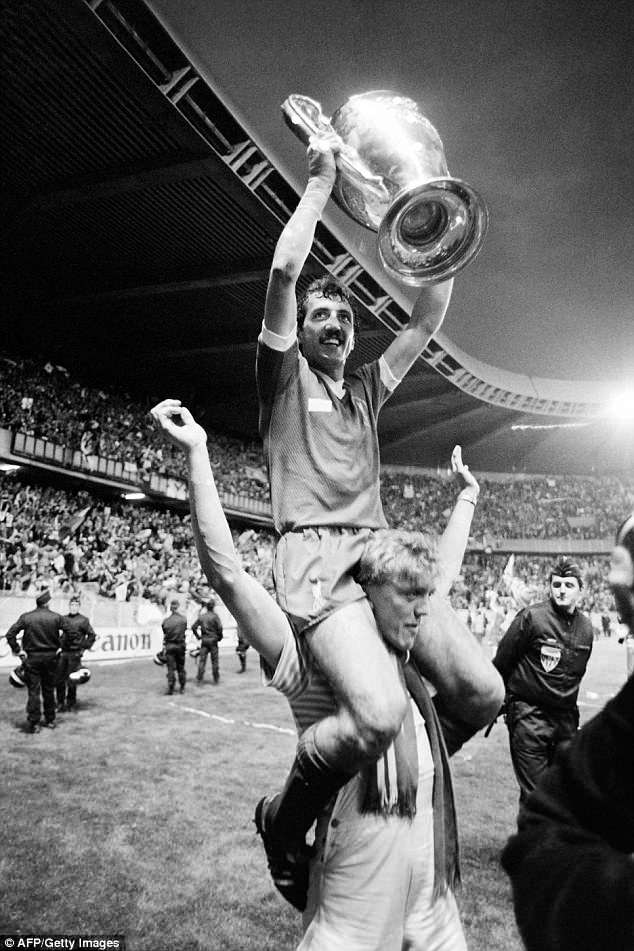 ‘From the early seventies to the mid-eighties the English teams are in practically all the finals.

‘Then the Italians start to dominate because the big companies like Fiat and Ferrari begin to invest in clubs and [Silvio] Berlusconi gets involved in Milan.

‘And Spain would change too a bit later with Ramon Mendoza as Madrid president. He employed a company called Dorna to commercialise the club’s image globally but in 1981 things were very different.’

There was one thing that was the same for both teams – neither knew very much about the opposition.

There were no hugs in the tunnels between players who were international team-mates or friends from sharing a commercial partner or an agent. Some players would have been almost unrecognizable to their opponents.

‘There was very little analysis of the opposition in that era,’ he says. ‘We would have had a coach sit us down in front of a one of their games. The full match! And you would sit through the 90 minutes asking ‘and who’s this one?’.

‘We had the Garcias, they had the Kennedys! Of course I knew who Clemence was and [Ray] Kennedy, Dalglish, Souness were big names.

‘Ian Rush was there but he didn’t play. They were the players we would have really known just as they would have known Juanito, Uli Stielike and Laurie Cunningham.’ 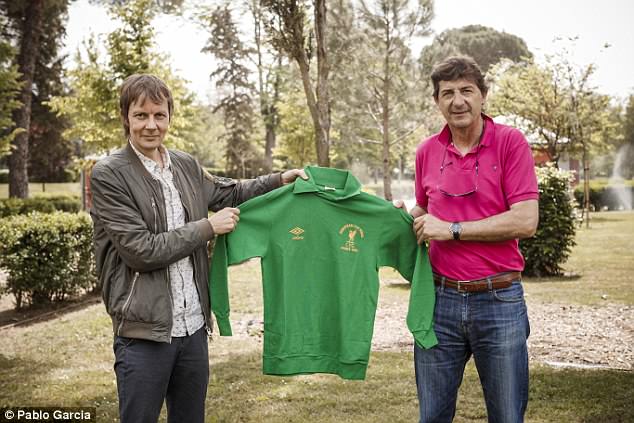 The England international signed from West Brom in 1979 was Real Madrid’s star but he had broken his toe in November 1980.

The night after he was discharged from hospital he went out dancing still wearing the cast, and the club were furious and suspended him.

The ban was a signal that they wanted to move him on. For that reason, and despite a botched recovery, he was forced to start the final.

‘Laurie’s toe was so bad he risked amputation but his problem was that the club wanted to sell him. And there was no better shop window than the European Cup final,’ says Agustin.

‘We had young players to come in but they didn’t dare, Laurie had to play.’

With Cunningham crocked, Spain winger Juanito carrying a knee injury and Stielike having pulled a muscle weeks before the final it was perhaps no surprise that Clemence finished the game with a clean jersey.

Madrid’s best chance came from left-back Jose Antonio Camacho who, spotting Clemence off his line, tried to chip him but sent the ball over the bar. 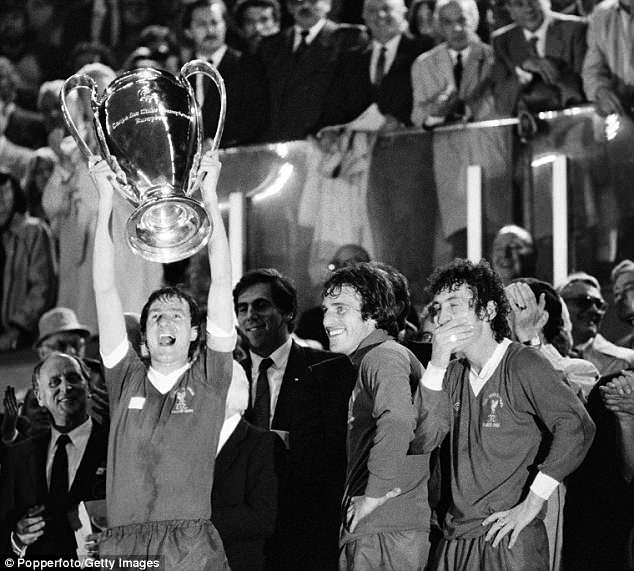 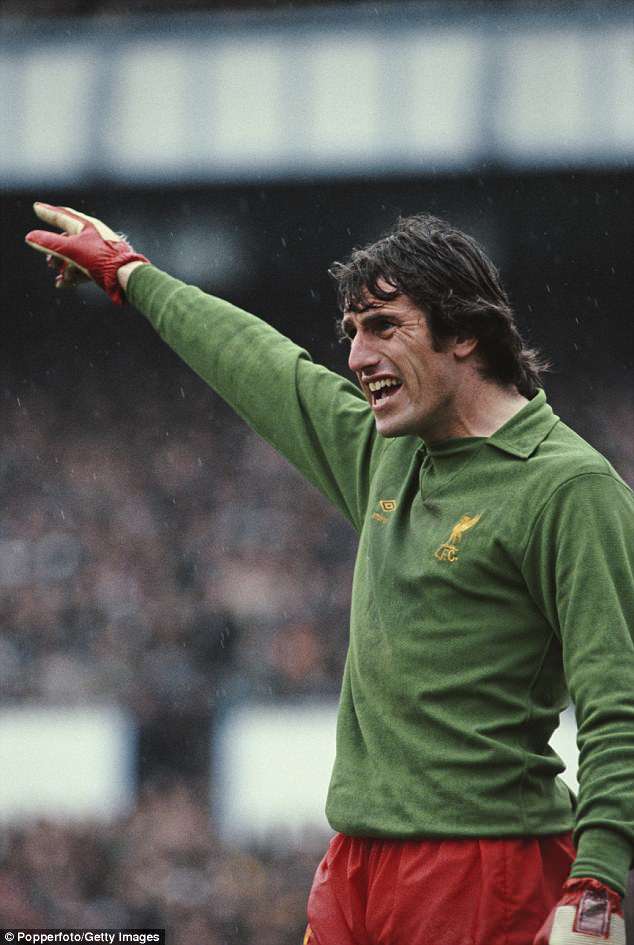 Augustin saved well from Alan Kennedy in the first half and Graeme Souness in the second before conceding the winner.

At the dinner after the game in Madrid’s team hotel 25 minutes outside of Paris – another sign of the two club’s contrasting levels of confidence, Liverpool were in the City centre Meridian – one of the assistant coaches told Agustin there would be other finals.

‘Not like this one’, came back the reply. After so long without a European Cup Agustin and his team-mates would have been immortalized had they won the trophy.

He went on to play two more European finals losing to Aberdeen in the Cup Winners’ Cup in 1983, but beating Cologne in 1986 in the UEFA Cup.

His determination never to be beaten again as he had been by Alan Kennedy was his undoing against Aberdeen.

‘I made sure I covered the near post this time, so much so that when the cross came in I couldn’t react. I got my fingers to it but I couldn’t stop it and John Hewitt scored.’

Madrid would have to wait another 17 years before playing their next European Cup final.

They have more than made up for it since then.

‘Real Madrid is built to win these finals,’ says Agustin of the current team. ‘Liverpool are perhaps a little bit more like we were back then.’