Rebecca Long-Bailey cemented her place in the final round of the Labour leadership contest this afternoon as she was endorsed by the Fire Brigades Union.

The backing of the FBU means Ms Long-Bailey now has the support of three different unions – enough to make it to the crunch vote of Labour members.

To make it onto the ballot paper candidates need to win the nominations of 33 local constituency Labour parties or three Labour affiliates, including at least two trade unions.

Ms Long-Bailey had already been backed by the Unite union and the Bakers, Foods and Allied Workers union.

Fellow leadership challengers Sir Keir Starmer and Lisa Nandy had already won enough backing to make it through to the final showdown.

However, the last remaining candidate, Emily Thornberry, is facing an uphill battle to progress having so far failed to win any union backing.

Rebecca Long-Bailey, pictured at a campaign event in Oxford on Tuesday, has been endorsed by the FBU

Ms Long-Bailey, who has the backing of the current Labour leadership in the race and has been labelled the ‘continuity Corbyn’ candidate, said she was ‘absolutely delighted’ to be endorsed by the FBU.

She said: ‘I’m delighted to make the next stage of the contest and I thank Unite, the Bakers Union and the Fire Brigades Union for their endorsements as well as the thousands of supporters who have volunteered and attended campaign events across the country.

‘As leader I will unleash our movement, take power back from the gentleman’s club of Westminster and build an aspirational socialism that speaks to people’s hopes and dreams.

‘The general election result was devastating, but our policies are popular and it’s clear we must not return to the politics of the past.’

He said: ‘I was locked in Labour’s longest-ever composite meeting with Rebecca – and her vision for a Green Industrial Revolution was clear. Climate change is an industrial issue for firefighters – and we’re proud to have worked with Rebecca to secure Labour’s 2030 target for net-zero carbon emissions. 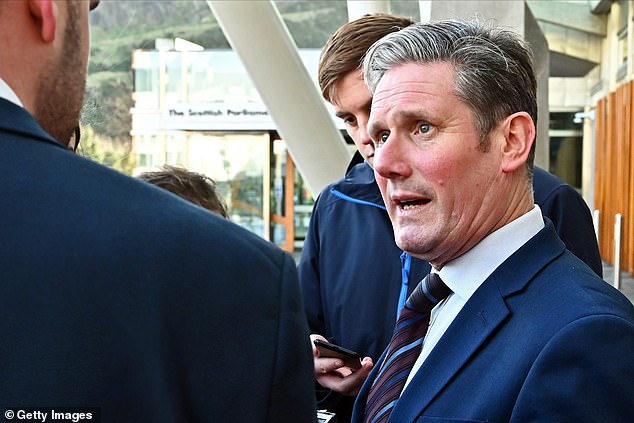 Sir Keir Starmer, pictured in Edinburgh yesterday, was the first of the candidates to make it through to the final ballot of Labour members

‘There can be no going back to the so-called centrism of New Labour – we never again want to see our party turn its back on workers, public ownership, and its own members.’

The FBU has also backed Richard Burgon for the role of deputy Labour leader which means he now has also made it into the final round of the contest.

Ms Long-Bailey and Mr Burgon are widely viewed as being the candidates most likely to continue with Jeremy Corbyn’s vision for the UK.