Growing up, I was a scruffy, dungaree-wearing kid, with frizzy hair, a severe squint and a goofy smile. Was I pretty? Absolutely not, but I didn’t know it and, more importantly, I didn’t care.

My carefree days were filled with imaginary games with my siblings: my sister and I devoted a summer to working on our make-believe horse stable, mucking out and grooming ponies named after our favourite sweets.

Even as my teens crept up on me, I was blissfully unaware of my appearance. I had mousy hair that I occasionally dyed purple, a thick fringe lovingly trimmed by my mother, and multicoloured braces on my overly large teeth. My looks simply didn’t matter.

But all that changed in 1997 — the year I turned 17. First, there was a painful operation to correct my squint. Then, my braces were yanked off. The greasy, curly fringe went too, as the hairdresser gave me stylish, newly blonde waves.

I remember arriving at a friend’s party, where her parents’ shocked expressions said it all. Where had Becca the sweet nerd gone, and who was this Barbie in her place?

Rebecca Wilcox, pictured aged 13 on holiday in 1993, said she was blissfully unaware of her appearance as a teen and had a fringe and braces

This sudden transformation, the ‘growing into your looks’, is the subject of a new Amazon series called The Summer I Turned Pretty, which depicts the coming of age of a 15-year-old girl.

But this charming tale doesn’t truly capture the shock of finding yourself in a different body. For it is rarely the story of an ugly duckling shedding her dowdy feathers and gliding into the world a graceful swan. Self-awareness comes with a price.

At first, it had me baffled. I remember a geography field trip on Cromer beach in Norfolk, when the boy I was working with tried to grope me, then cried when I told him I just wanted to be research partners.

My best friend would be cross with me when I misunderstood my new-found sway over the opposite sex. On a night out, when a boy asked for my number, I gave him my lab partner’s, too, thinking he wanted a study date.

I was gobsmacked when my friend punched my shoulder and muttered that his ambitions were more lusty than studious. Couldn’t I see I was now fanciable?

Then the penny dropped. It was like being given an all-access ticket after I had been kept on the sidelines. I started wearing make-up. Baggy jeans were replaced with sheath dresses, crop-tops and shorts so short the undercurve of my bum was visible.

My parents were appalled. I remember hearing one father describe me as ‘jailbait’ to his son. I liked it at the time, but shudder to remember it now.

Little by little, I became obsessed with my looks and the benefits that came with them. I no longer had to queue for nightclubs, or buy drinks. I would step out on a dancefloor in a tiny dress and swiftly be invited to the exclusive ‘big spender’ tables, to be plied with drink before escaping the clutches of an amorous Marquis, perhaps, at the end of the night. 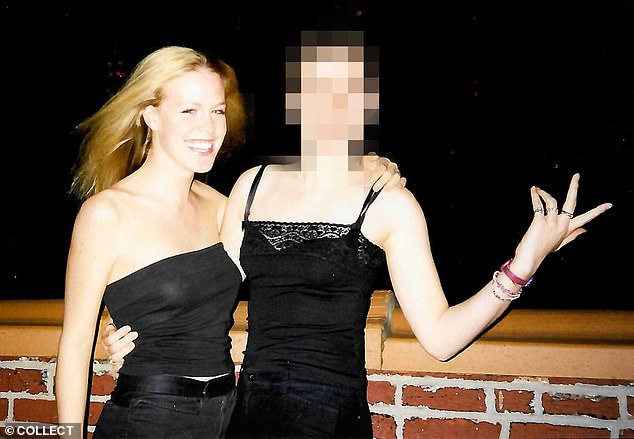 Rebecca, pictured with a friend in New York in 2000, became obsessed with her looks and lost lots of weight as she thought she needed to work harder to keep pretty

With the attention came growing paranoia: if my looks were getting me this interest, what would happen if I lost them?

I thought I needed to work harder to keep pretty, which led to stupid behaviour.

I lost a lot of weight. I went on the M&M diet where I smoked too many cigarettes, drank black coffee and when I felt faint, allowed myself one of six chocolate M&Ms per day. I don’t recommend it.

I had to look model-perfect when I went out, which took hours. The more response my youth, blonde hair and exposed flesh got, the more I worried it would stop and no one would like me any more.

I also attracted horrible men. Nice men hardly ever approach the girls dancing in the spotlight. The ones who came up to me wanted a status symbol, not an actual person, on their arm and would encourage me to take diet pills, stay out late and ignore worried calls from friends and family.

One night I stayed out so late partying that I got locked out of our rented holiday house.

My friends had called me when they were leaving, but I’d ignored them. I arrived back to find the gates shut — the only way in was to scale the spiked, 12ft fence. I slept on a damp sunlounger outside.

I think I went slightly mad, and I cringe to recall it all. Can you believe I once licked the floor in an Egyptian hotel so I’d get a stomach bug and look svelte in my bikini? No, me neither. 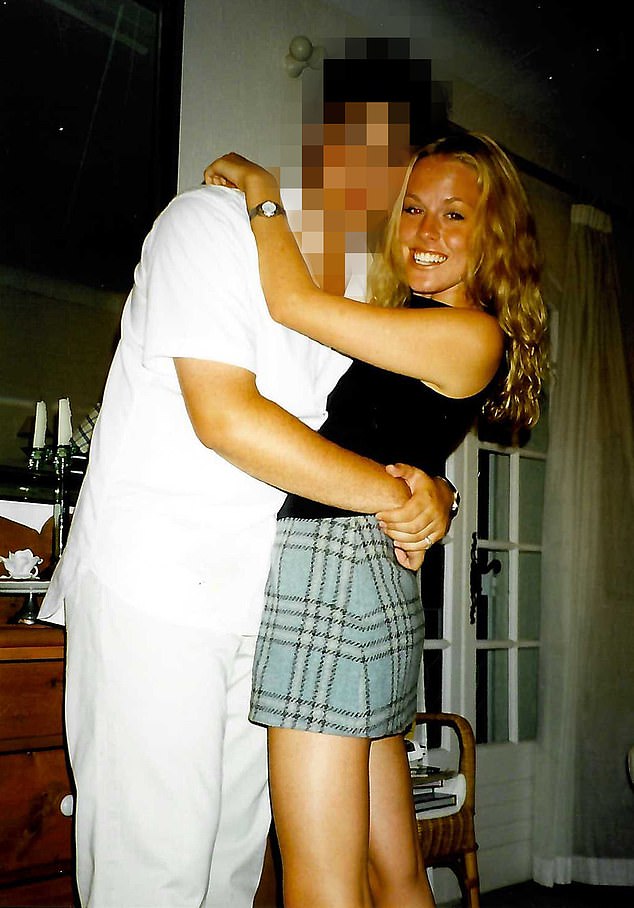 Rebecca, with a friend on holiday in the South of France in 1998, said she attracted ‘horrible men’ and said she had to look model perfect when she went out

During my first year at university, my mother, Esther Rantzen, remembers coming to visit. She and Dad watched in bemused disbelief as I ‘poured’ myself into a tiny gold dress, sprinkling my shoulders with glittery powder, then were horrified when I got a round of applause when I arrived at the party.

Mum worried about the burden I’d created by not allowing myself to be the scruffy, happy young girl I once was.

‘You went straight round the twist,’ is how she puts it now.

Alongside my spiral into self-obsession, my family’s health was in crisis. My elder sister, Miriam, had ME, a devastating and misunderstood illness that meant she was often bedbound or in a wheelchair.

I would wheel her around on rare days out, or sit by her side in her darkened room. It was on these days that I felt most true to myself. I wish I’d done this more.

My father’s health also deteriorated, owing to heart disease, and he died when I was nearly 21. In my misery, I gave up all restrictions and ballooned from a size 6 to 14.

It helped me to stop thinking about my looks. I remember returning to university for the autumn term and a boy I had flirted with before approached me. I thought he was going to extend his condolences but he just said: ‘What’s happened to you?’

Thankfully, perspective had taught me that his attitude was the problem, not my weight gain. 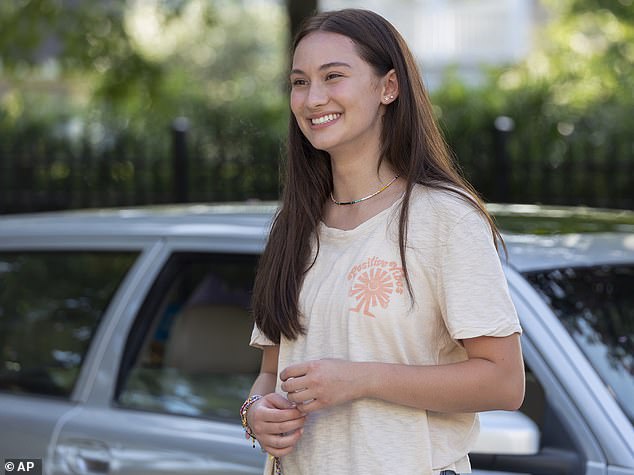 She said that her story and sudden transformation has echoes of an upcoming Amazon Prime series called ‘The Summer I Turned Pretty’, pictured

Since then, 20 years, two wonderful children, a decade of sleep deprivation and a lifetime of sun damage has meant I’ve lost even more of the looks I once held so dear.

Joan Collins said: ‘The problem with beauty is that it’s like being born rich and getting poorer.’

This has been true for me in terms of influence and allure, but not of happiness. In the process of losing my looks I’ve become my true self — and hopefully a nicer person.

A few years ago, on a rare child-free night out with some girlfriends, I walked into a club and noticed I was completely invisible to everyone. The bouncers almost refused me entry, I was shoved out of the way on the dancefloor and overlooked by the barmen.

None of this upset me. I didn’t have to suck in my stomach, or check on my hair and make-up. I didn’t care. I could just let go and dance with my friends.

Miriam recently told me a story about my ‘pretty’ days. At a party, I was wearing a tiny sequin top with neon pink, skintight satin trousers. Seeing a man staring at me, I blew a kiss and jiggled my sequins at him.

A girl turned to Miriam and said: ‘I do not like your sister.’

Miriam replied: ‘I don’t either, right now, but she’s not really like this. Underneath it all, she’s very sweet.’ I hope I’m now the person she thought I could be.