Not only is she a doting mother of four, but she’s an ever supporting wife too.

And wanting to cheer on her man, Rebekah Vardy, 34, flew out to Madrid so she could be pitch side to cheer on husband Jamie and his Leicester City F.C team mates as they took on Atletico Madrid on Wednesday night.

The Champions League quarter-final clash had been a big game for the England footballer, but despite his loss, his wife was ready and waiting to console him when the final whistle blew.

Supporting wife: Rebekah Vardy, 34, flew out to be pitch side for her husband Jamie’s quarter-final clash against Atletico Madrid in the Spanish city on Wednesday night

Rebekah had gone all out for the game and kitted herself in her husband’s footballing strip, complete with his surname and number on the back.

She teamed her Leicester shirt with a pair of jeans and studded aviator shades that she sported on top of her head.

Proving that even a sporting kit can be glam, Rebekah styled it with flawlessly applied make-up and her brunette tresses in cascading tousled curls.

She was on hand to give her beau a reassuring hug after his 90 minute battle on the pitch that saw Leicester lose 1-0 to the Spanish side. 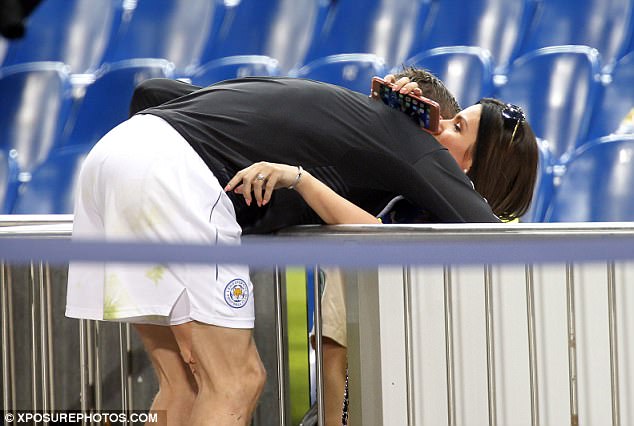 Reassuring hug: She was on hand to console her husband following Leicester City F.C’s 1-0 defeat at the Vicente Calderón Stadium in Madrid 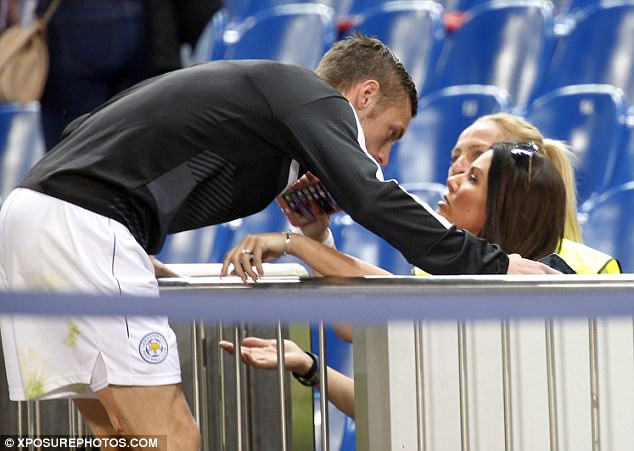 Comforting words: She had locked her arms around Jamie’s neck and no doubt gave him a few reassuring words as he made his way over to her when the final whistle blew 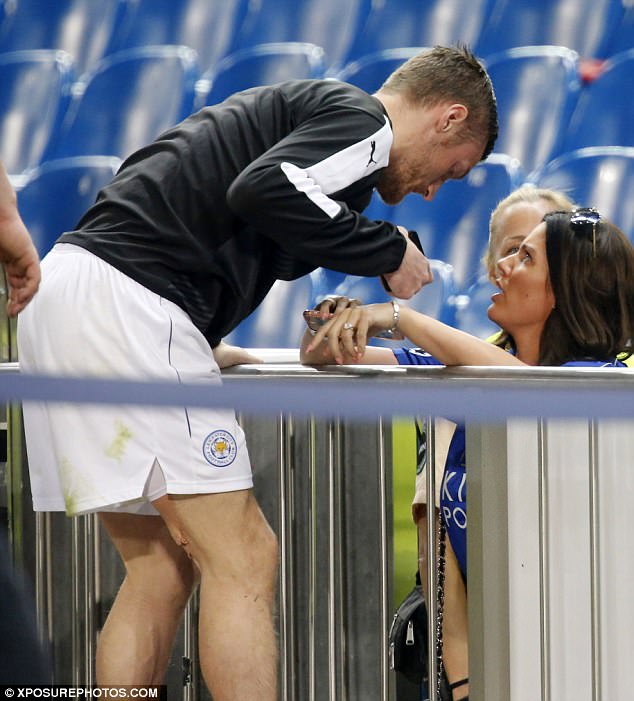 Still hope: Leicester’s semi-final hopes haven’t been dashed just yet as they will play Atletico Madrid in the second leg of the quarter-final clash back in the UK

Jamie made his way over to Rebekah when the game had finished and she locked her arms around his neck, before pulling him in close.

She had been joined by a female pal in the stands and had been in high spirits before the match got underway.

Taking to Instgaram, Rebekah shared a photo of herself and her friend in matching football shirts as they posed in Atletico Madrid’s home ground – the Vicente Calderón Stadium. 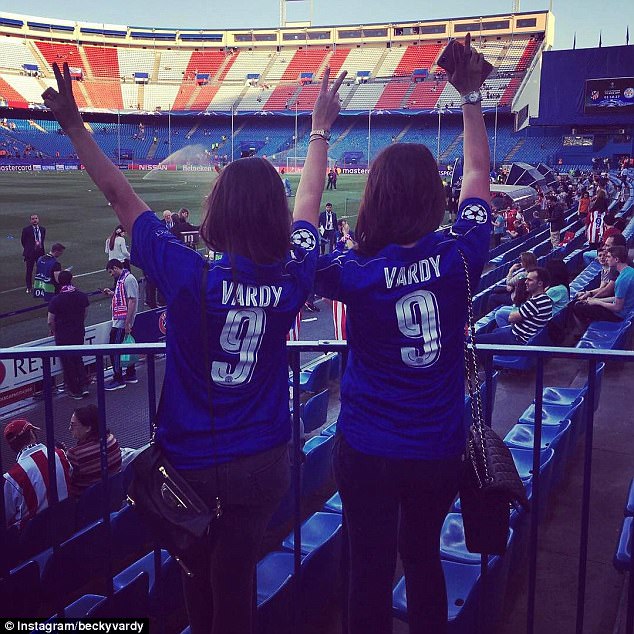 ‘Come on boys’: Rebekah had shared her excitement over the game on Instagram and donned her man’s footballing strip for the occasion 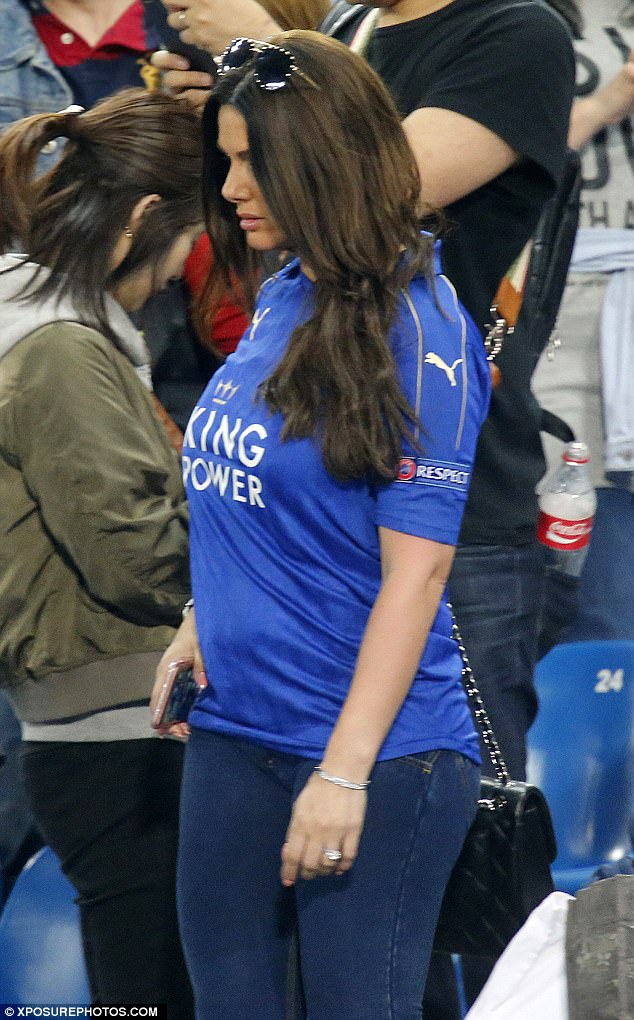 Going glam: She proved that even a sporting kit could be given a stylish edge as she dolled up her shirt with her hair in glamorous curls and sporting perfectly applied make-up 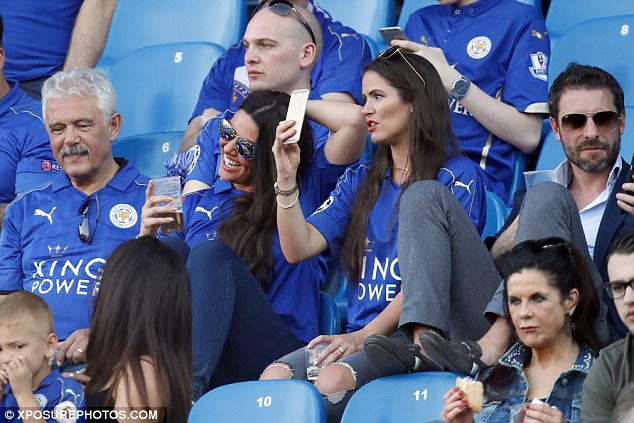 In high spirits: The mum-of-four cut a cheerful figure as she took her seat in the stands 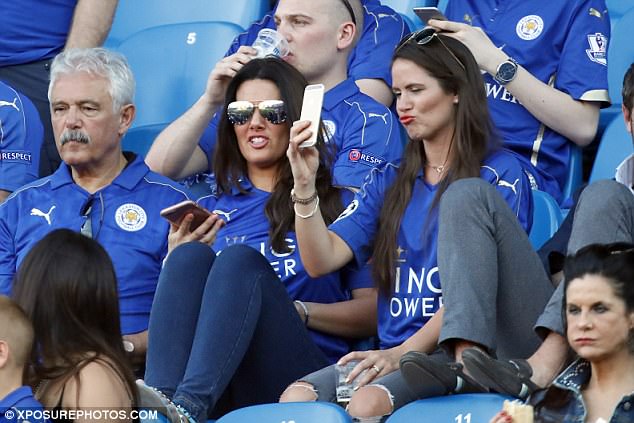 Taking it all in: She was joined by a female pal at the match who was spotted taking selfies while waiting for the game to begin

Wishing Jamie and the rest of his team to do well, she captioned her snap: ‘Come on boys #lcfc.’

Despite their loss out in Spain, Leicester will get the chance to try and redeem themselves on home soil on April 18, as a place in the Champions League final is still within grasp.

Rio Ferdinand had branded Leicester’s performance in the first leg of their quarter-final meet ‘unbelievable’.

Commenting on how far the side have come in the last couple of years, he said: ‘Just to be in the tie still, against such an experienced side, is unbelievable.’ 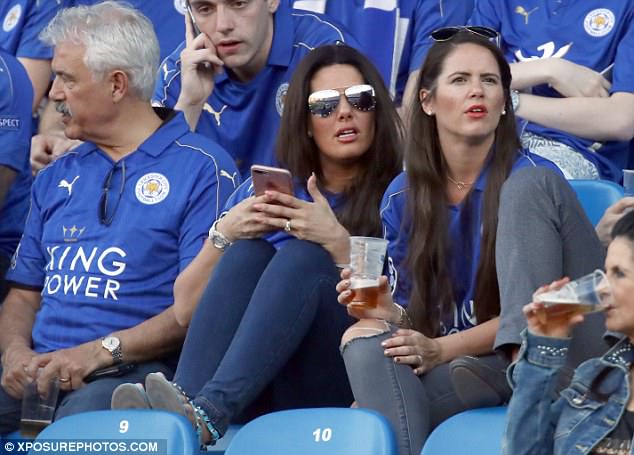 Engrossed: Rebekah and her pal were spotted looking intently at something that caught their eye in the crowd 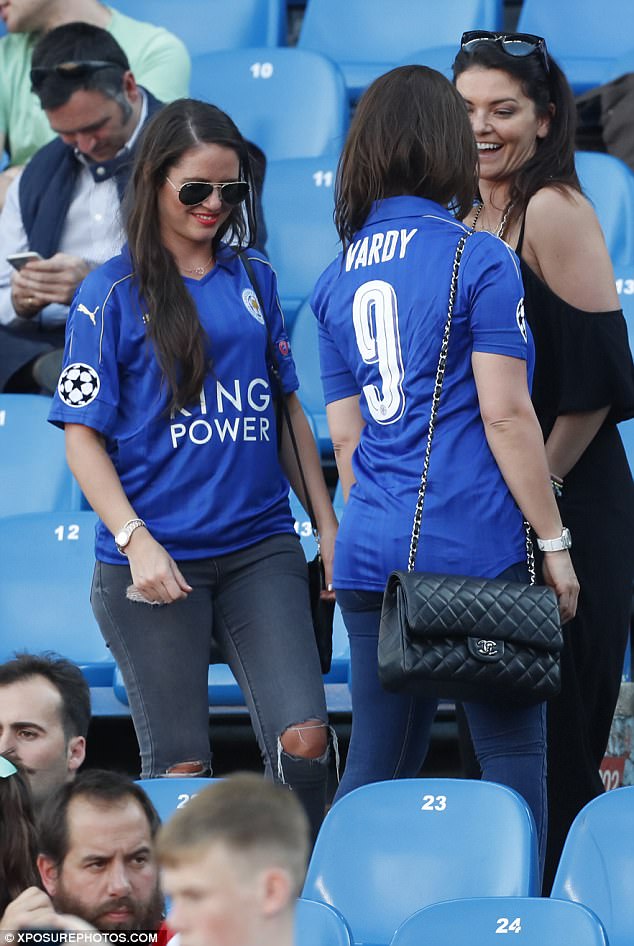 That’s my name: The brunette beauty showed off her personalised football shirt as she mingled with other match-goers

Meanwhile, Rebekah’s appearance in Madrid comes after she has been encouraging new mums to embrace their post-pregnancy figure.

She welcomed her fourth child and her second with husband Jamie, son Finley, on January 8, and three months after giving birth carried out a photo shoot to show off her ‘mummy tummy’.

The WAG has since explained she wanted to show that she’s not ‘ashamed’ of her body and speaking about the positive response her photo have had, she told OK! magazine: ‘It was something I wanted to do for new mums who might be feeling self-conscious about their bodies. 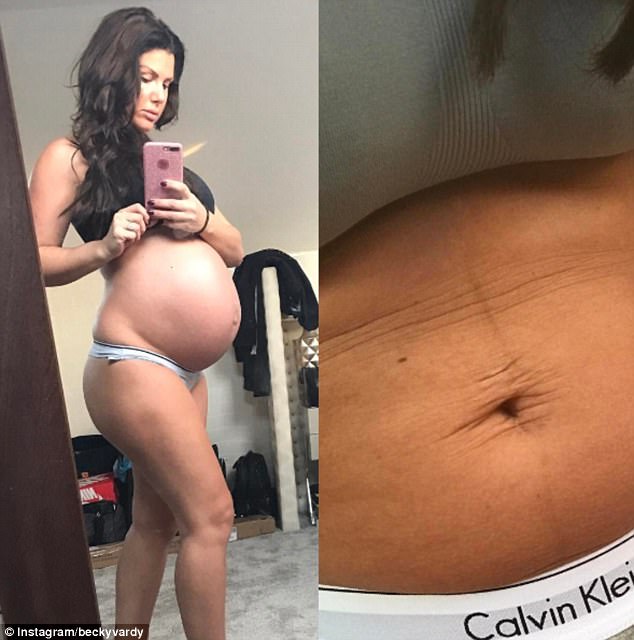 ‘I’m not ashamed of my body’: Rebekah’s appearance in Madrid came after she has been encouraging new mums to embrace her pregnancy body

‘We’re so used to seeing celebrities’ bodies bounce back after giving birth but that isn’t realistic for most people.

‘After I gave birth to Finley I had some nasty comments from people saying my thighs were fat, but I wanted to do the shoot to show that I’m not ashamed of my body.’

Just weeks after giving birth, Rebekah had shared a photo of the stretch marks on her belly to Instagram. 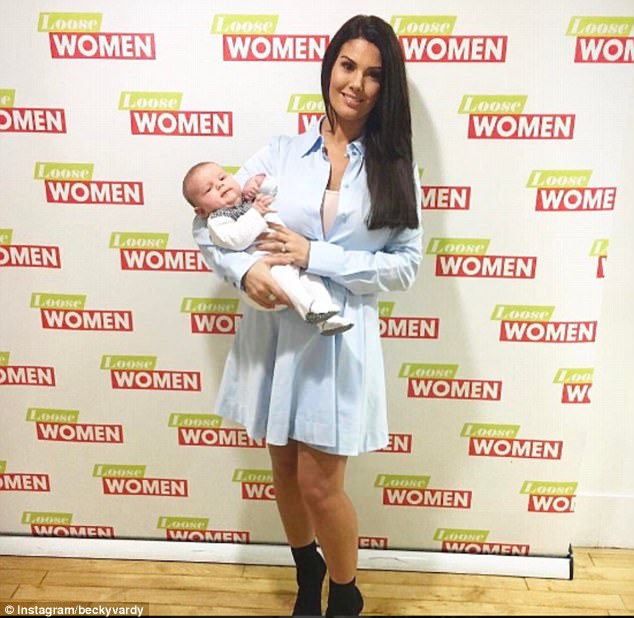 Positive support: Rebekah (pictured above with son Finley) was praised by fans after posing with her ‘mummy tummy’ in a recent photo shoot

She added the caption: ‘Our bodies go through so many changes growing a baby, it’s not easy it’s tough on women! The trauma of childbirth, the sleep deprivation that follows, the ups and downs! We never fully recover!’

Rebekah is also mum to daughter Sofia, two – whom she shares with Jamie – as well as Megan, 11 and Taylor, six, from previous relationships. 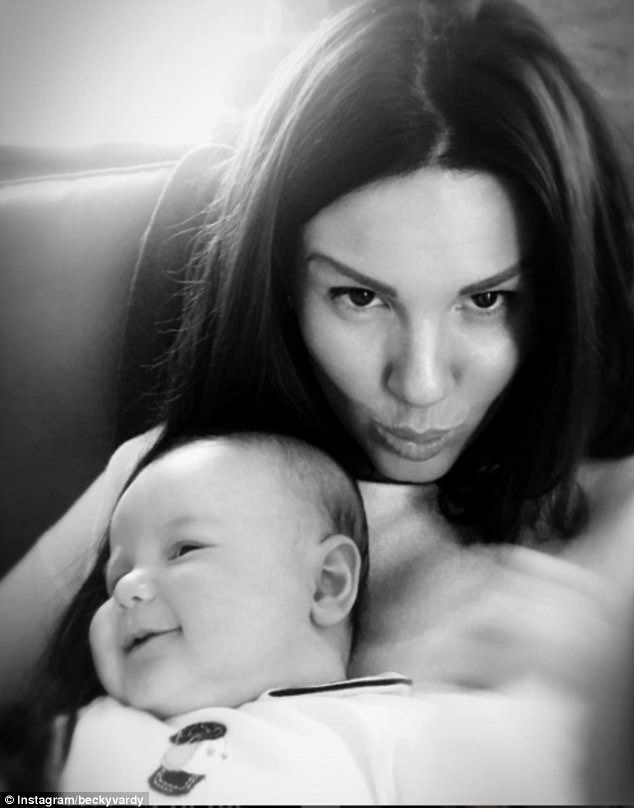 ‘It’s not easy it’s tough on women’: She is often seen addressing her post-pregnancy figure and insisting women should accept that their ‘imperfections are beautiful’