She’s recently jumped from Italy to the French resort town of Saint-Tropez during her jaunt around Europe.

And Rebel Wilson certainly proved she knows how to holiday in style while heading out sailing on Wednesday.

Taking to Instagram, Rebel looked incredible while draping her slimmed down figure in a green, hooded resort dress.

Lap of luxury: Hollywood actress Rebel Wilson oozed glamour in Saint-Tropez as she relaxed on a yacht and practiced her French while on vacation on Wednesday

The Pitch Perfect star looked to be in high spirits as she relaxed on a lounge looking to get some sun during the trip.

Rebel paired the look with a white wide brim hat along with a pair of sunglasses, proving herself to be sun smart.

Rebel was later seen in a video practising her limited French skills. 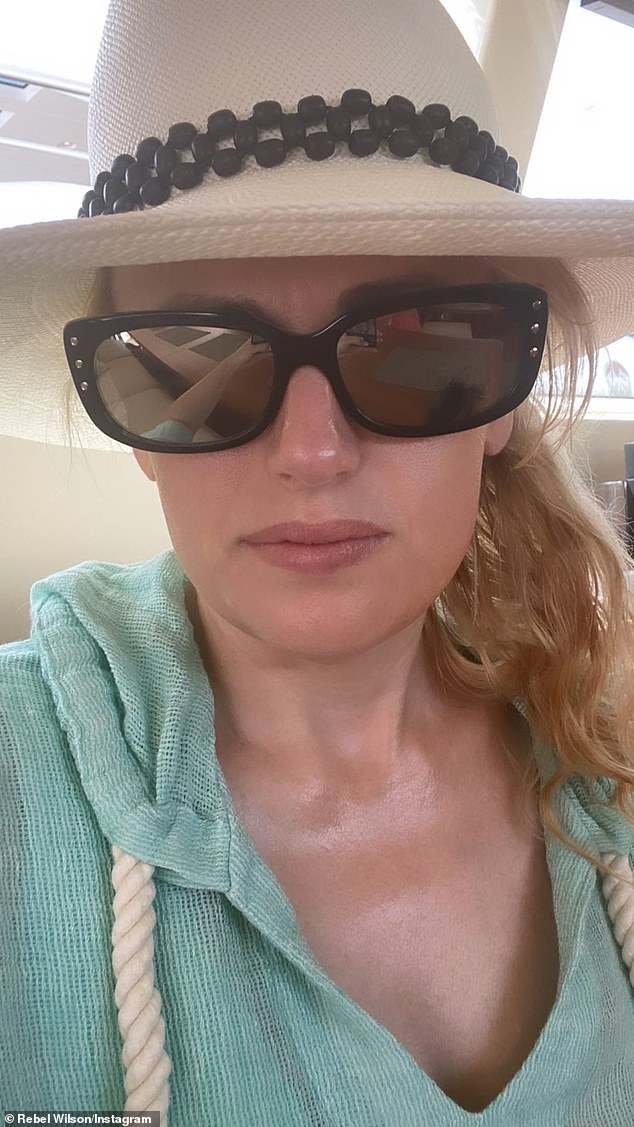 Chilling out: The Pitch Perfect looked to be in high spirits as she relaxed on a lounge

Rebel has shed more than 30 kilograms over the last year thanks to an impressive workout regimen and lifestyle overhaul.

She looked sensational on Tuesday as she showed off her svelte figure in a little black dress in France.

The Pitch Perfect actress, 41, beamed as she sipped on champagne in the chic plunging dress that was flatteringly belted at the waist. 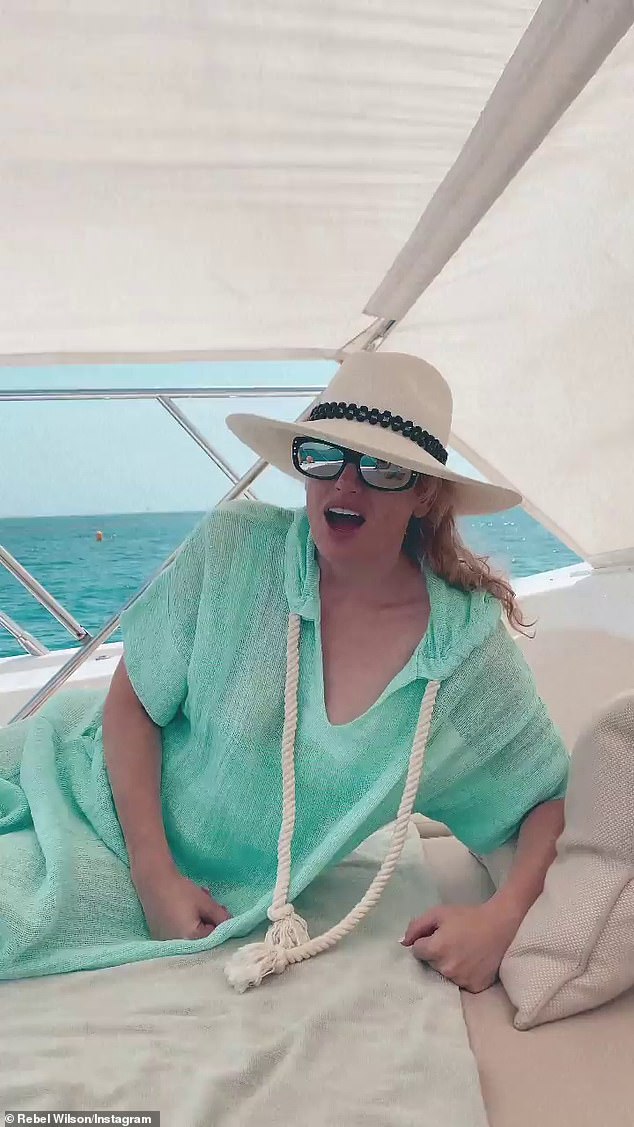 Très chic: Rebel was later seen in a video practising her limited French skills, with her saying a couple of words in the language

Rebel looked stunning as she posed with her friend Lisa Reuben who also donned an LBD.

The star swept up her blonde tresses into a cute top knot and let her fringe hang naturally over her forehead.

She opted for an all-black ensemble and styled the ruffle-shouldered midi with a pair of simple black stilettos.

Rebel looked picture perfect as she contoured with a sweep of bronzer for the selection of holiday snaps.

The star showcased her toned legs as she strode candidly towards the camera with her glass of fizz in hand. 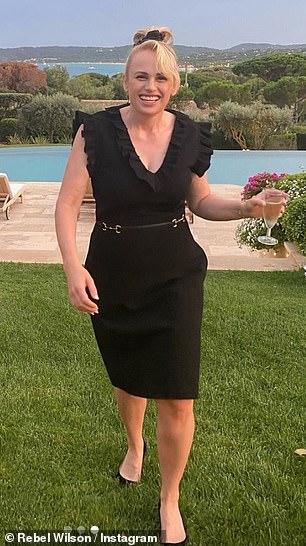 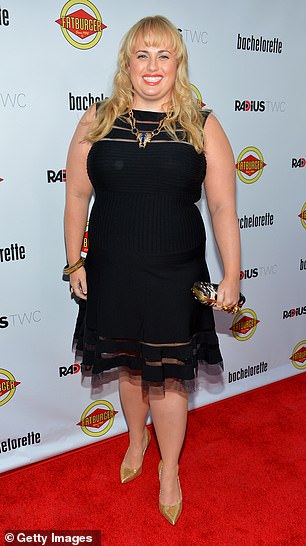 Gorgeous: Rebel Wilson looked sensational on Tuesday as she showed off her svelte figure in a little black dress in France (L) the actress has shed 65lbs over the last year (R pictured in 2012)

It comes after Rebel recently revealed she lost weight to boost her chances of getting pregnant.

The comedienne was initially ‘offended’ that her doctors suggested her fertility would improve if she was slimmer and ‘healthier’. However, the comments gave her the motivation to tackle her eating habits.

Speaking on Instagram Live, she said: ‘When I was going through and looking into fertility stuff, the doctor was like, ‘Well, you’d have a much better chance if you were healthier’.

‘I was actually a bit offended. I thought that even though I was bigger, I was pretty healthy.

‘So that’s what started it – that if I lost some excess weight, it would give me a better chance of freezing eggs and having better quality eggs.

‘At first it wasn’t even for myself, it was thinking of a future mini-me and their quality. That’s what kick-started it.’ 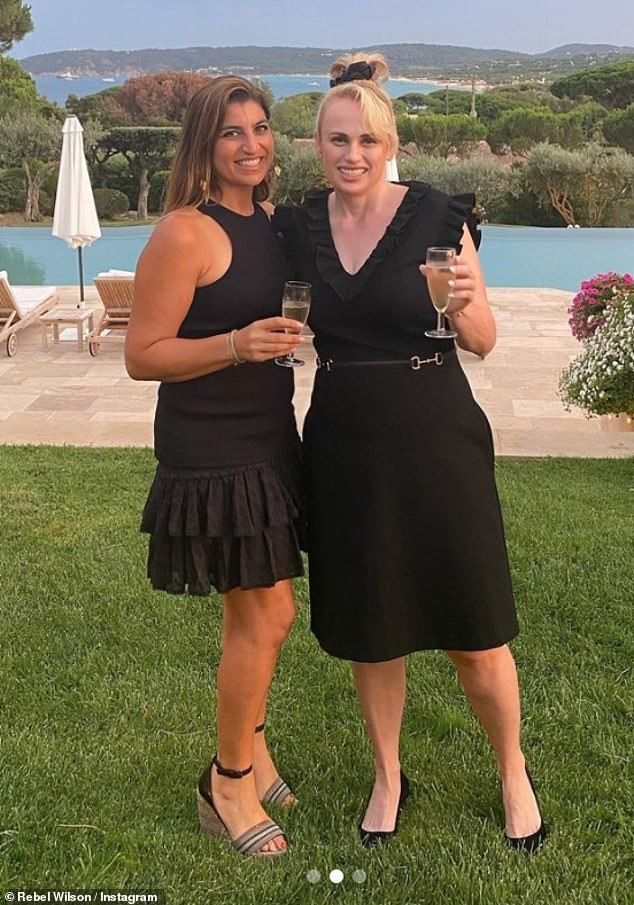 Stunning: Rebel looked stunning as she posed with her friend Lisa Reuben

However, in May, Rebel told her Instagram followers she’d been given some ‘bad news’ about her fertility.

She wrote: ‘I got some bad news today and didn’t have anyone to share it with … but I guess I gotta tell someone.

To all the women out there struggling with fertility, I feel ya. The universe works in mysterious ways and sometimes it all doesn’t make sense … but I hope there’s light about to shine through all the dark clouds.’