The tragic story of ‘Poland’s Anne Frank’ who was killed during the Second World War has given a harrowing insight into what life was like in Nazi Germany.

Renia Spiegel was just 18-years-old when the Nazis invaded Przemysl, a city in south-east Poland, and began to round up Jews.

Some 22,000 were rounded up for deportation to death camps but Renia hid herself in an attic on the outskirts of the Jewish ghetto where the Nazi’s were rounding up Jews.

There, she penned her diary – pages from school exercise books which had been bound together – which eventually ended up being nearly 700 pages long. She had begun writing it at the end of January 1939, eight months before Germany’s invasion of Poland which triggered the firing gun for the start of the conflict.

Her last entry, dated July 25, 1942, was shortly before her death at the hands of Nazi officers.

The diary reappeared in New York City in late 1960s and her story remained a relative secret until a few years ago. But Renia’s younger sister, Elizabeth Bellak, 87, wants her legacy to live on.

The journal has been published in Poland and is currently being translated into English, while a documentary is also set to be made. In Speigel’s native Poland, the diary has helped launch a national poetry competition.

Renia’s tragic demise is all the worse as she writes about her aspirations to travel to France.

In April 2, 1939, she wrote: ‘I learn French now and if there is no war, I might go to France. I was supposed to go before, but Hitler took over Austria then Sudentenland, Czechoslovakia… and who knows what he will do next. In a way, he affects my life, too.’

She also details how she has fallen madly in love with a student called Zygmunt Schwarzer, just a few months before the Nazis marched into her town and destroyed her perfect bliss forever.

Their first kiss took place on June 20, 1941, just as the Germans were preparing to launch their invasion, dubbed Operation Barbarossa.

By 1942, the relationship between Renia and Zygmunt, who was two years older, seemed to become more passionate in nature.

Just a few days before her 18th birthday, she wrote: ‘Now I know what the word ecstasy means. 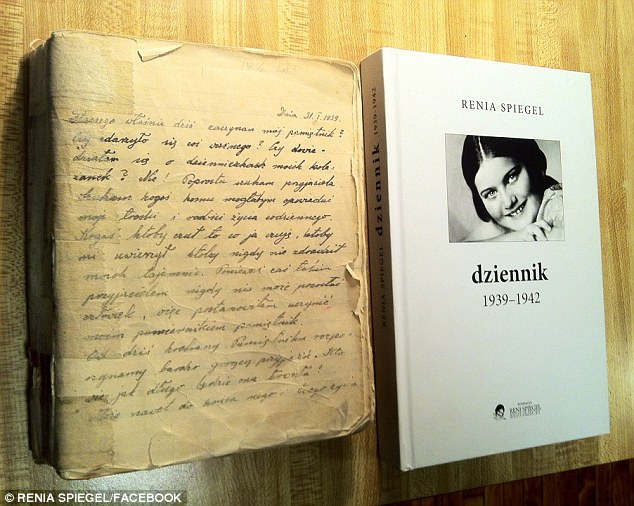 Renia’s diary was almost 700 pages along and remained a secret untiul recently, where it has since been made into a book

‘I almost understand it. It is indescribable; it is something that is the best, which only two loving creatures can do. And for the first time I felt this longing to become one, to be one body and to feel more.’

Just five days after writing about what appears to be the consummation of her relationship with Zygmunt, Renia’s world is turned upside down by the war which had finally reached her doorstep.

She wrote: ‘There is killing, murder. God, for the umpteenth time I humble myself in front of you, help us, save us! God, let us live, I beg you.’

Zygmunt managed to sneak Renia and her sister out the ghetto they had been forced into, putting her sister, just 12 at the time, into the care of a Christian family.

Renia, along with Zygmunt’s parents, were hidden in the attic of his uncle’s building. His uncle, Samuel Goliger, was a member of the Judenrat, who were put in charge by the Nazis to adminster ghettos and were given the privilege of living outside the ghetto’s walls.

In her diary, she pleaded for God to save them, but two days later on July 30, 2942, she was rounded up with Zygmunt’s parents and shot dead. 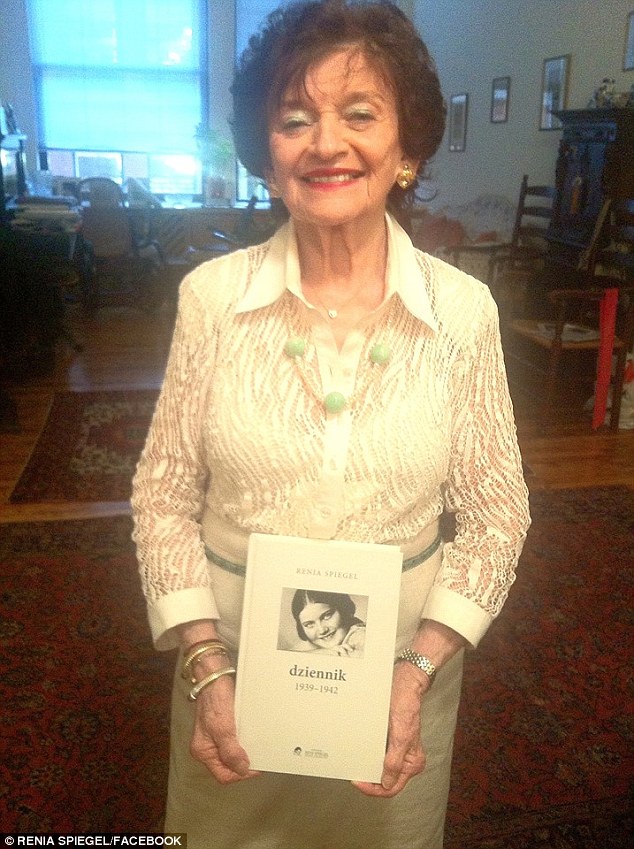 A day after they were killed Zygmunt returned to the house from his own hiding place and found Renia’s diary. He added his own entry into the diary, writing: ‘Three shots! Three lives lost!’ he wrote.

‘It happened last night at 10:30 p.m. Fate has decided to take my dearest ones away from me. My life is done. All I can hear are shots, shots… Shots! My dearest Renia, the last chapter of your diary is complete.’

Tomasz Magierski, a Manhattan filmmaker who has been researching Renia’s story for the last few years, told the New York Post: ‘It’s an enigma. We’re not sure if it was the Polish neighbors or members of the Judenrat who gave them up.’

Bellak immigrated to New York with her mother, as did Zygmunt, who gave them the diary.

She told the New York Post that she and her mother struggled to read the diary but that it had passed it onto filmmaker Magierski, who read the diary in three days and has made trips to Poland in an attempt to solve the puzzle of Renia’s last remaining days.

He said: ‘This is the best story never told.’