A reckless driver has been jailed for 26 months after he crashed into a police car in a 100mph motorway chase – as a baby girl sat unfastened in the back seat.

Wayne Smith, 27, ploughed his black Ford Focus into a police vehicle on the M5 in a dramatic collision which closed the motorway for ten hours on August 5 last year.

He had embarked on a 260-mile trip to Newquay, Cornwall, with the young girl in a ‘callous and reckless act’ after snatching her from her mother hours earlier.

Dashcam footage released today shows Smith, who has a Masters degree in physics, undertaking a lorry, swerving along the hard shoulder and colliding with a police BMW X5 near Weston-Super-Mare, Somerset.

The police car, which was one of four pursuing Smith in the high-speed chase, flips over at least four times before it comes to a rest on its roof with flames flickering from the wreckage.

PC Jason Smith was inside the BMW when it overturned. He sustained serious head injuries and suffers from post traumatic stress as a result of the collision.

The child, who ‘was not secured in the backseat’, was found unharmed in the footwell of Smith’s car, but was rushed to hospital as a precaution.

Wayne Smith, 27, ploughed his black Ford Focus into a police vehicle on the M5 in a dramatic collision which closed the motorway for ten hours on August 5 last year

Smith was convicted of battery, causing actual bodily harm, cruelty to a child and dangerous driving and jailed for 26 months following a trial at Wolverhampton Crown Court.

He was also banned from driving for three years, after which he will have to undertake an extended retest. 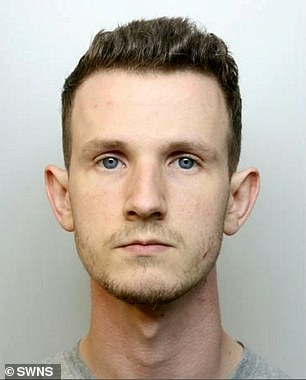 Pictured: Smith, who was jailed for 26 months at Wolverhampton Crown Court on Monday

Sentencing, Judge Barry Berlin told Smith: ‘On August 4 at about half past 12 in the afternoon, the defendant entered the complainant’s house. He snatched her phone from her and threw her against the floor.

‘He sent a text and WhatsApp message to her boss at 2.30pm pretending to be her saying she would not be coming to work at 3pm. He put the child into his black Ford Focus and headed on the motorway to the south west.

‘This was a callous and reckless act which was typical of his behaviour. After the police found suicide notes on his laptop they suspected he was in an unstable emotional state.

‘He knew the police were looking for him from the text messages they sent him.’

Judge Berlin went on to discuss Smith’s ‘dangerous driving,’ describing how the young child was ‘left in harm while you swerved through traffic with her on the back seat.’

‘Police officers saw you near junction 2 at speeds of over 100mph,’ he said. ‘The four officers formed a box of four cars to try to stop you undertook a lorry and went onto the hard shoulder.

”You rammed an X5 police car that turned over many times.

‘I accept you did not do that as a deliberate attempt to injure the officer, but PC Jason Smith was injured in the collision and has PTSD.

‘The child was not secured in the back seat. She was not injured but had marks on her genitalia and rashes to her back from sitting in her urine and faeces in old nappies and then baby wipes. 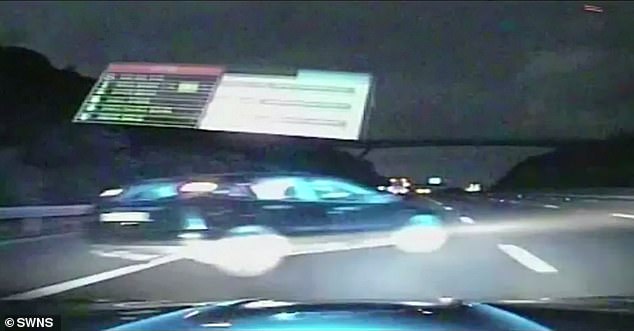 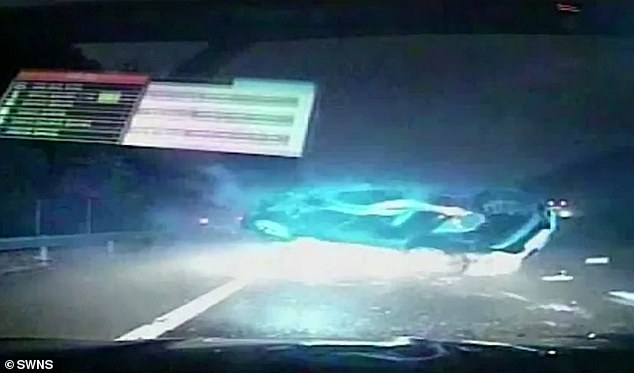 The police car, which was one of four pursuing Smith in the high-speed chase, flips over at least four times before it comes to a rest on its roof with flames flickering from the wreckage

‘I find this to be high culpability child cruelty due to the location of the offence and the timing.

‘As to count four of dangerous driving, this was a police chase at speeds of at least 90 mph during which you undertook a lorry and swerved onto the hard shoulder before crashing.

‘Although the prosecution case for premeditation was not made out in evidence, you put the lives of yourself and the baby at risk.

‘There will be 16 months in prison and that will be consecutive to the two months for battery.

‘For child cruelty in my view there is high culpability. You wholly disregarded the child when you would not stop for the police and put her at high risk.

‘Mr Smith you are an intelligent man who tried to use this intelligence to put the blame on others. I’m going to make that consecutive and I think that is merciful. That adds up to 26 months and you will serve half of that in custody.’ 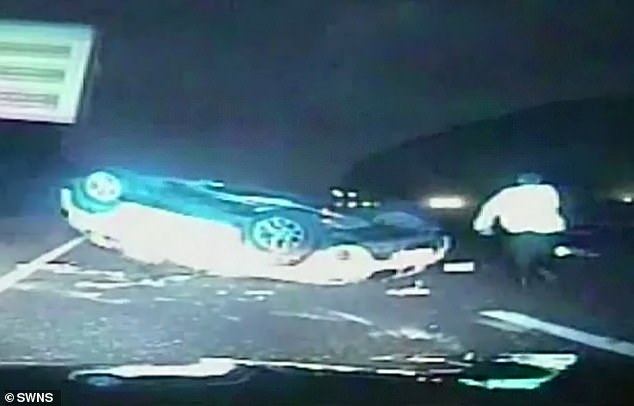 PC Jason Smith was inside the BMW when it overturned and he sustained serious head injuries, alongside suffering from post traumatic stress, after the collision

Paul Cliff, defending, said: ‘He is an intelligent young man. He has a masters degree in physics and is hard-working, focused and conscientious according to most of the colleagues he worked with prior to his remand.

‘He has logged over 400 hours of unpaid work with wildlife charities. Prior to this matter he has no previous convictions.For a young man of his background a criminal record will have ongoing implications for his work.

‘There have been very severe consequences for this young man who has been since August last year, one of the most stressful times to have to spend in detention.’

Detective Constable Martin Ottey, from Staffordshire Police, said after the case: ‘Smith took a young child without his mother’s knowledge and put its life at risk by driving extremely dangerously and reaching speeds way over the speed limit.

‘He put the child, the officers and himself in danger and it’s a miracle no one was seriously injured.

‘Despite his best efforts to get away, officers arrested him and he’s now been brought to justice for his actions.’