Reclusive teen with giant facial tumours has no friends

A teenage girl revealed she hasn’t left her house in years because she is bullied over her giant facial tumours.

Rubi Dulari, from India, has neurofibromatosis, a genetic condition that causes tumours to grow along nerves. There is no cure.

Her parents first noticed small lumps developing on her face when she turned three and the tumours have since grown.

The 18-year-old, whose mother and ‘best friend’ died four years ago, was constantly bullied at school and now fears she will never fulfil her dream to get married.

‘I have a terrible face,’ she said. ‘I have dreams like other girls to dress up like a bride and get married but nobody would want to marry this face.’

Rubi Dulari, from India, has neurofibromatosis which has ruined her life as people mock her 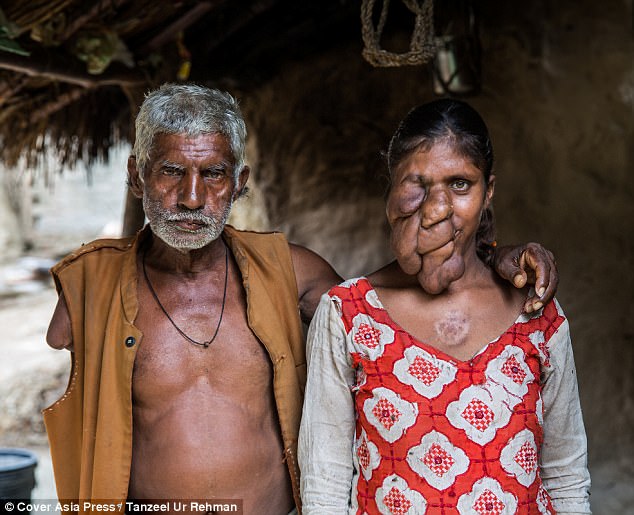 The 18-year-old locks herself in at home and relies on her father, Lal Muni, who lost his right arm in work machinery, to do her shopping

When Rubi’s father Lal Muni, 68, and mother Shiv Dulari started noticing the lumps they took her to several doctors. But no medicine they prescribed had any effect.

Lal Muni, who lives in a small village in Lucknow, in Uttar Pradesh, northern India, said: ‘All the doctors in our area prescribed her with some medicines but her condition just got worse.

‘We started taking her to clinics in different cities but the doctors gave up on her. They said nothing could be done. 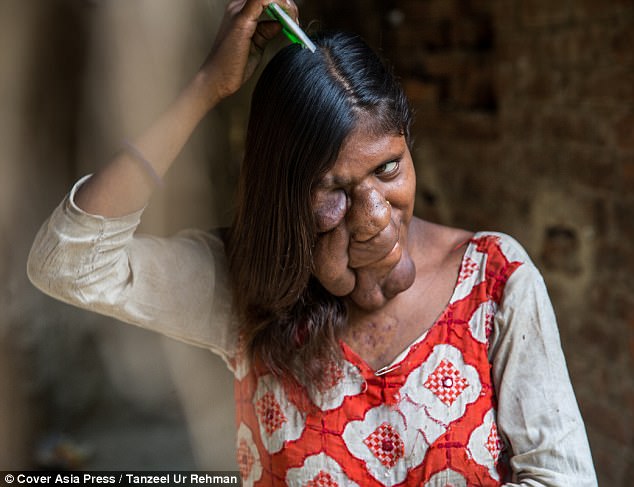 Neurofibromatosis is a genetic condition that causes tumours to grow along nerves.

Symptoms and severity vary but it typically causes coffee-coloured patches and non-cancerous lumps on or under the skin.

As well as causing benign tumours, it can also lead to gradual hearing loss, tinnitus and poor balance.

Both types are often associated with learning difficulties.

There is no cure, but surgery can remove the bumps.

As Rubi got older, the tumours got so big and it became difficult for her to go to school and walk to the market, as more people noticed her condition.

‘Nobody in school would sit with me,’ she said. ‘I was always ignored. I had no friends. They all made fun of me and laughed at me. It was very humiliating.’

When her mother passed away in 2013, Rubi stopped going to school altogether and locked herself away.

Too scared to leave the house and face the abuse, she now relies on her father to buy her toiletries and clothes.

Lal, who lost his right arm in work machinery, said: ‘Her mother was her best friend. She was her strength but after her death Rubi struggled very much.

‘She was unable to cope up with her situation without her mother. It’s been a difficult time.’

Rubi’s right side of her face has dropped and has skin covering her eye, and she can only see if she lifts the flap of skin with her fingers. The condition also affects her speech.

She added: ‘I can see from both my eyes but it is just that I have to forcefully keep my right eye open with my fingers.

‘I can even talk; even though people find it difficult to understand me.’

The adolescent said she attracts unwanted attention whenever she leaves her house.

‘Some feel pity, while some look shocked,’ she said. ‘I have to just accept it. But when I know I cannot take it, I stay at home.

‘Who does not want to live a normal life? I cannot even explain the feeling I get when I see myself in the mirror. I only wish to be normal like others.’ 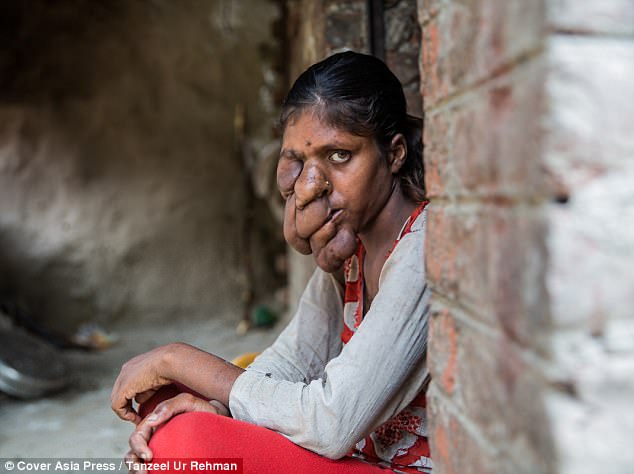 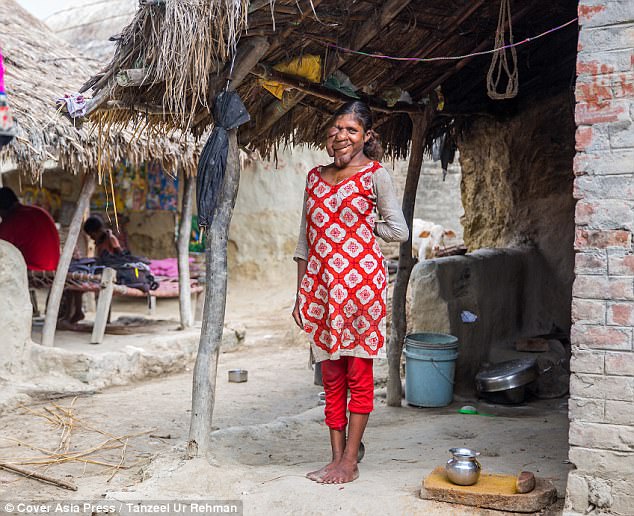 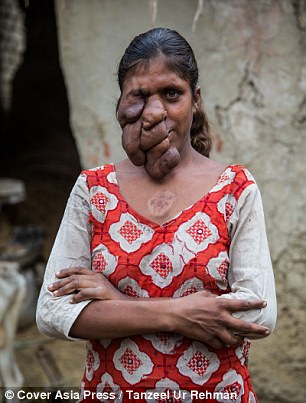 Surgery is an option but the tumours will grow back

Dr Jaswan Shakya, a medical director and surgeon at Sushma Koirala Memorial Hospital, in Kathmandu, who has operated on many neurofibromatosis patients, said: ‘The girl appears to be suffering from a multisystem genetic disorder which develops tumor of the nervous system.

‘People can live a normal life with just day to day difficulties. It is usually not painful but it causes difficulty in eating, drinking and speaking.’

‘The only treatment is surgery to reduce the size of tumour, but the condition means the tumours will re-grow after a few years.’

Rubi added: ‘If I ever get treatment I would go out to the market and shop for myself. I have not shopped for myself in years.

‘It’s always my father who has shopped for me and I would like to do it myself again one day.’