GANGNEUNG, South Korea (AP) – Ilya Kovalchuk may have been out of the NHL for almost five years, but he remains an impressive player.

The former New Jersey Devils wing and five-time Olympian scored his 12th and 13th career goals at the games in Saturday’s 4-0 win over the United States.

Before the game, he’d been Russia’s joint highest-scoring Olympic player since the collapse of the Soviet Union, but the first goal moved him past Pavel Bure’s 11 goals and made him the sole record holder. Russian media are already talking about a sixth Olympics in 2022, and breaking Anatoly Firsov’s Soviet-era Olympic scoring record of 18 goals.

Russian athlete Ilya Kovalchuk (71) celebrates his goal against Slovenia during the second period of the preliminary round of the men’s hockey game at the 2018 Winter Olympics in Gangneung, South Korea, Friday, Feb. 16, 2018. (AP Photo/Julio Cortez)

“I still have some gas left in my tank, so I hope I score some more,” he said after the game, and sounded more than a little nostalgic for North American opposition, even though the U.S. team was hardly NHL standard.

“It’s always special to play against North Americans, the U.S. or Canada,” he said. “You know that they will show up. They are strong teams, they always play tough.”

Kovalchuk walked out on the New Jersey Devils in 2013 with 12 years and $77 million remaining on his contract, opting to return to Russia with Kontinental Hockey League club SKA St. Petersburg. He left the NHL with 816 points from as many games with the Devils and Atlanta Thrashers.

KHL teams don’t make salaries public, but Kovalchuk and teammate Pavel Datsyuk are believed to be among the league’s top earners, in large part thanks to Russian state gas company Gazprom’s massive investment in SKA.

Russian government-owned companies have spent big to turn SKA and CSKA Moscow into unofficial “base clubs” for the national team, similar to Spartak and CSKA (the Red Army club) in Soviet times. Of the 25-man Russian roster in Pyeongchang, 23 play for either SKA or CSKA.

But the KHL doesn’t offer the level of competition that the NHL does. The league’s finances are so unbalanced between the big clubs and the rest that SKA has a 46-8 record this season and averages 4.13 goals per game, typically in blowouts. Kovalchuk has 63 points off 53 games in 2017-18.

So would Kovalchuk consider a return to the NHL? He’ll be an unrestricted free agent in the summer.

“I don’t think about it yet. We can talk about it after the season,” he said. “We have playoffs in front of us (in Russia). We won the regular season, we have a great team this year. But now my mind obviously is on Olympics.” 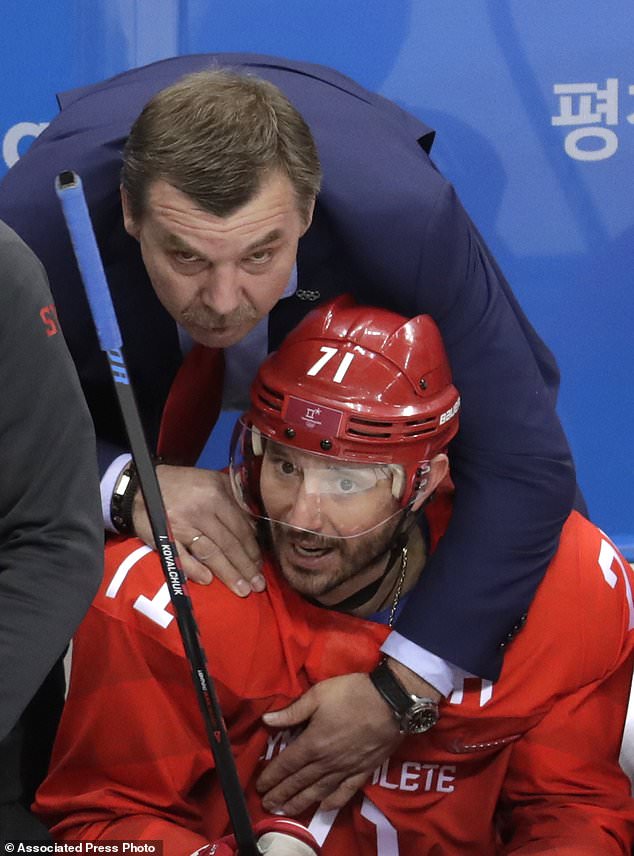 Russian head coach Oleg Znarok talks to Russian athlete Ilya Kovalchuk (71) after Kovalchuk scores a goal against the United States during the second period of the preliminary round of the men’s hockey game at the 2018 Winter Olympics in Gangneung, South Korea, Saturday, Feb. 17, 2018. (AP Photo/Julio Cortez) 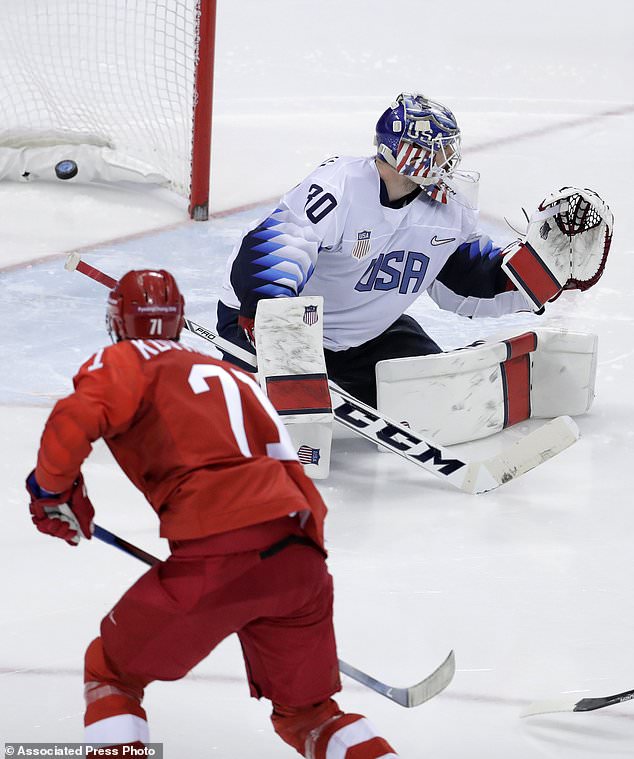 Russian athlete Ilya Kovalchuk (71) shoots past goalie Ryan Zapolski (30), of the United States, for a goal during the third period of the preliminary round of the men’s hockey game at the 2018 Winter Olympics in Gangneung, South Korea, Saturday, Feb. 17, 2018. (AP Photo/Julio Cortez)