A record number of men needed NHS surgery after snapping their penises last year, according to statistics.

In total, 164 men had to have an operation to save their manhood after fracturing the blood-filled columns which make it hard during an erection.

Men in their 30s and 40s were most affected by the painful injury but the youngest patient was just 18 while the oldest was in his 70s.

When a penis fractures it most often happens during sex under the weight of a partner’s body or a powerful thrust.

A scientific study in 2015 found the cowgirl (woman on top), doggy style and missionary positions were most likely to cause injury.

In total, 164 men had to have an operation to save their manhood last year after fracturing the blood-filled columns which make it hard during an erection (stock image)

The number of men needing penis repair surgery last year was 38 per cent higher than in 2014/15 and a record number, according to The Sun.

And there may be even more cases among men who are too embarrassed to go to a doctor about it, one expert said.

The anatomy of an erection is based around two spongy tubes which fill up with blood and harden, and a firm, fibrous sheath which surrounds them, called the tunica albuginea.

When the tunica albuginea, which is made mostly of collagen, comes under extreme pressure it can snap and cause the penis to bend out of shape.

If this happens the erection will quickly subside and the penis become swollen and painful. The penis can even make an audible cracking sound when it breaks.

It usually happens if the penis is thrust into a solid surface or if something – or someone – falls on it.

‘If you leave it to health without treatment there is a high chance of getting scarring which can lead to Peyronie’s disease.’

Peyronie’s disease is a condition in which scar tissue builds up inside the penis and causes it to bend dramatically rather than stay straight – a slight bend is normal but Peyronie’s may cause it to be 90° or more.

A fractured penis can usually be repaired with surgery to stitch the tunica albuginea back together.

HOW DOES A PENIS FRACTURE? 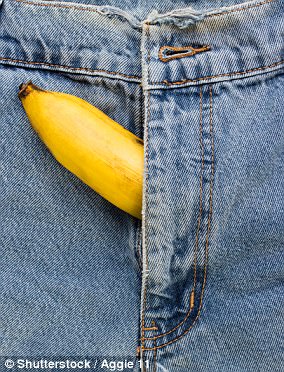 Since 1924, 1,600 cases have been recorded worldwide – roughly 16 instances per year, the Telegraph previously reported.

Researchers noted that in 50 per cent of cases, a gruesome cracking sound can be heard. Four in five male victims lost their erection.

Those who have already been traumatised from breaking their penis are often left with erectile dysfunction problems and a lifetime of painful sex.

Just last week, MailOnline reported on a man from southern China who was left in agony after breaking his penis during sex with his wife.

Doctors found that his penis was at an odd angle and was in a swollen shape that made it look like an eggplant.

He was diagnosed with a penile fracture after tearing a sponge-like erectile tissue called corpora cavernosa.

Blood flows into corpora cavernosa that runs along the penis and making it hard during an erection.

The trick to stopping penile injuries is to thrust quite shallowly, according to Ms Cox.

Holding your partner close to you using a grinding rather than thrusting motion will also reduce the risk, she told MailOnline.