RAC customers who breakdown in their cars could soon be attended to by an electric patrol van, it has announced this morning.

The roadside assistance firm has added a pure electric Renault Zoe van to its fleet of 1,600 patrol vehicles in a UK-first trial to understand how breakdown providers will be able to operate after new petrol and diesel vans are banned from sale from 2030.

However, there are some limitations in terms of its capabilities as a recovery vehicle, not least the fact it is unable to tow stricken cars from the roadside.

Recover-E: The RAC – one of the nation’s biggest breakdown providers – has added an electric Renault Zoe to its fleet of 1,600 recovery vehicles

Some – though not all – electric cars are unable to tow due to the extra weight putting too much strain on components like the brakes but also potentially damaging the electric powertrain itself.

This is because EVs use regenerative systems when slowing down – additional bulk of another vehicle will add lots more kinetic energy when trying to decelerate, which can overwhelm the electrical system.

While the zero-emission Zoe is unable to hitch a broken down motor, the RAC says it can can carry all the equipment that’s needed to fix four out of five breakdowns on the spot.

It will mostly be deployed to attend two of the most common breakdowns experienced by motorists in Britain – problems with batteries and tyres.

It has been modified by the company so that – when fully loaded – it can carry up to six replacement 12-volt car batteries, two tyres, a trolley jack, a battery tester, the ‘RACScan’ diagnostic tool and a host of standard patrol tools.

With the RAC attending some 7,000 ‘random events’ every day, bosses said it was imperative that the van had a range of over 200 miles to ensure it can reach customers immediately.

The Zoe Van E-Tech chosen – which starts from £26,450 (excluding VAT) – has an official 245-mile range based on laboratory measurements; that means it is likely closer (or less than) 200 miles in the real work, especially when laden with heavy batteries, tyres and tools. 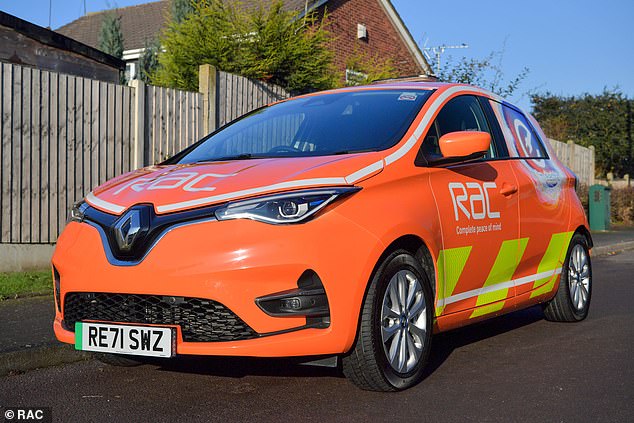 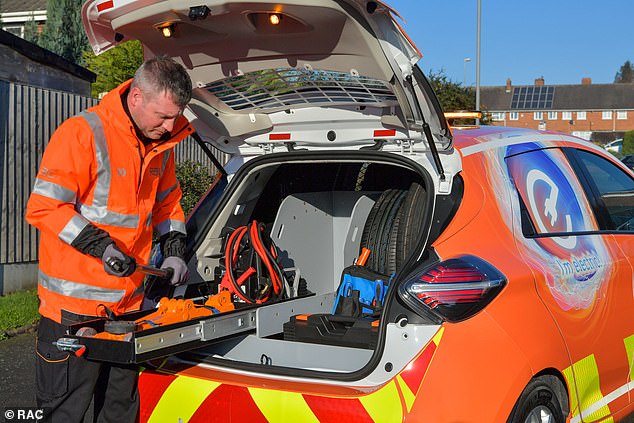 Another issue that will certainly raise eyebrows is the Zoe’s recent poor performance in crash tests.

Euro NCAP, the official body that scrutinises the protection levels of the latest cars, awarded the electric Zoe passenger car a zero crash test rating at the end of last year after it emerged that Renault had removed a vital seat-mounted head-protecting airbag during a recent update of the vehicle.

During a side-pole collision test, which replicates the car sliding sideways into a tree or lamppost, the assessment found that its omission would likely cause fatal or serious injuries if a sold object penetrates deeply into the passenger compartment.

It became only the third new car in 25 years of the test to score the lowest – zero – rating as a result.

With patrols often forced to pull over in precarious positions to attend vehicles that have broken down before being able to reach a safe area away from the road, some might argue that it is imperative for recovery technicians to use models with better protective characteristics.

The van will only be operating in urban and rural locations to assess its efficiency as a patrol vehicle, meaning those who are forced to pull up on a motorway will unlikely see it appearing over the horizon to help them. 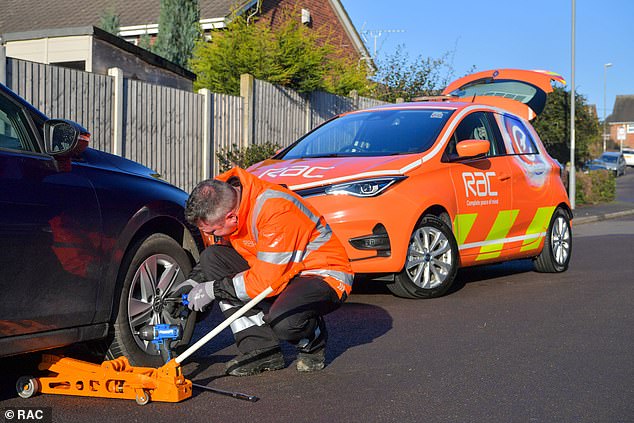 While the zero-emission Zoe is unable to tow a broken down motor, the RAC says it can carry all the equipment that’s needed to fix four out of five breakdowns on the spot 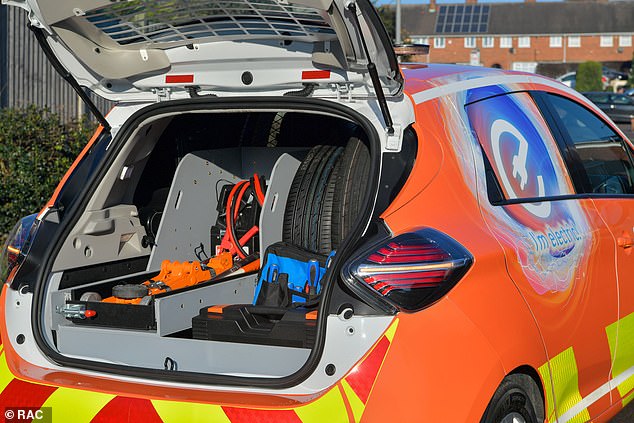 The Zoe van can carry up to six replacement 12-volt car batteries, two tyres, a trolley jack, a battery tester, the ‘RACScan’ diagnostic tool and a host of standard patrol tools

RAC group operations director Paul Coulton said it is imperative for trials of EVs in these scenarios to take place now with the ban on sales of new internal combustion engine vans at the end of this decade, which will give fleet operators that need to replace their motors on a regular basis no option but to transition to vehicles with batteries and electric motors.

‘This first RAC all-electric patrol van may be small, but it’s easily capable of successfully attending nearly half of the breakdowns we get called out to on a daily basis.

‘We have been assessing various electric vans for some time but have been frustrated by the fact there isn’t one on the market that can do what our diesel-powered patrol vans can do at the moment in terms of carrying 500 parts and tools and towing broken-down vehicles, with a range that’s even half what one of our standard vans can do on a full tank.

‘While we continue to talk to manufacturers about our requirements, we’re confident we can put an electric RAC patrol van into effective use on the road by carefully deploying it to jobs that won’t require towing.’