On Oct. 29, 2012, Superstorm Sandy devastated coastal areas of New Jersey and New York, causing billions of dollars in damage, and killed dozens of people in the U.S. and Caribbean.

Here’s a look at where things stand with the region’s recovery five years later:

New Jersey reported $36.8 billion in damage, and New York $32.8 billion. While most of that money has been spent on recovery, some funds continue to be spent five years later, including aid for damaged homes.

Claimants in both states have received more than $8 billion combined in payouts from the National Flood Insurance Program. New York state reported 48 deaths due to the storm, and New Jersey reported 12.

New Jersey Gov. Chris Christie, a Republican, has often put the number of homes and buildings damaged by Sandy in his state at 365,000. But victim advocacy groups say that total is wildly inflated, and that the true total is closer to 40,500 primary residences, and 15,600 rental units that sustained major damage in the storm. Thus far, nearly 5,000 homes have been elevated in New Jersey.

More than 66 percent of participants in the New York Rising Housing Recovery Program have completed construction on their homes; of approximately 3,500 elevation projects statewide, 1,300 have been completed.

The Metropolitan Transportation Authority, which operates commuter railroad, buses and subway lines, as well as several bridges and tunnels in New York, has identified 46 projects focused on climate resiliency at a cost of approximately $3 billion.

New Jersey Transit, the state-run commuter railroad, recently secured storage space on higher ground to avoid a repeat of the damage to many of its rail cars that were left parked in a low-lying area during Sandy.

New York City’s utility, Con Edison, says it has spent $1 billion on storm hardening projects including installation of “smart” switches on its overhead system, submersible equipment that can withstand flooding and redesigned underground electrical networks. PSEG Long Island has employed aggressive tree-trimming efforts and now uses shorter cross-arms on electrical poles to move wires closer together and repel falling tree branches rather than cradling them. New Jersey has shored up and elevated electric infrastructure and set up an energy resiliency bank to fund critical projects.

New Jersey has rebuilt all its boardwalks damaged by the storm, and most beaches have been replenished, though some of the hardest hit areas won’t get new sand for a few more months. The Jet Star roller coaster that plunged into the ocean off an amusement pier in Seaside Heights, providing one of the storm’s enduring images, was dismantled and replaced by a new roller coaster this year.

New York state has spent more than $250 million to purchase 650 properties to be returned to nature. In New York City, the 5.5 mile Rockaway Boardwalk in Queens was completely rebuilt for $341 million. The city also completed a $28 million project in Brooklyn to reduce coastal storm risk and has started construction on a $22 million project in Staten Island to reduce flooding. The city has secured $1.7 billion from FEMA for resiliency investments at four major hospitals. 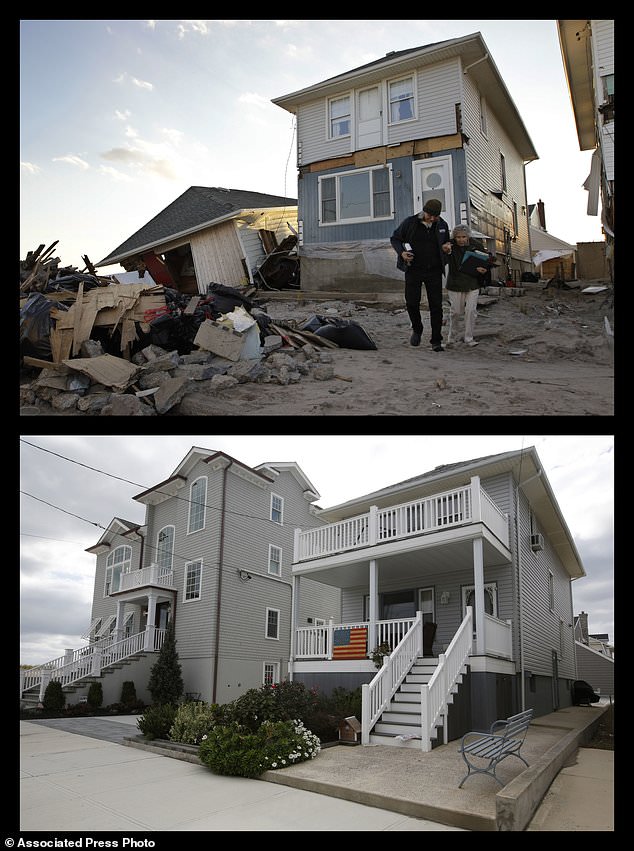 This combination of photos shows Cristian Dobles, left, escorting his 87-year-old mother-in-law, Patsy Roberts, from her house after they retrieved some documents in the Belle Harbor section of the Rockaways in New York on Dec. 5, 2012, and the same view five years later on Oct. 12, 2017. (AP Photo/Kathy Willens) 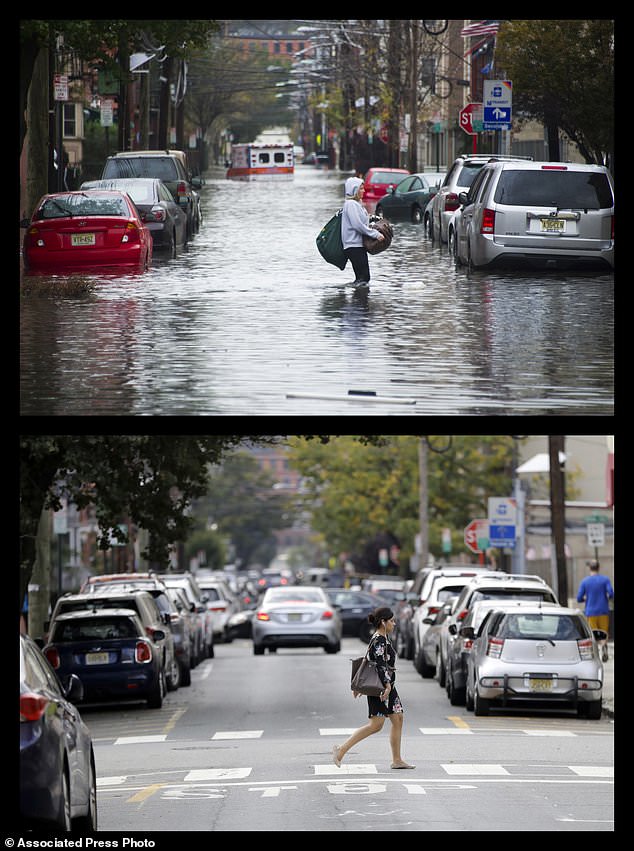 This combination of photos shows a woman walking through floodwaters with a stalled ambulance in the background in the aftermath of Superstorm Sandy in Hoboken, N.J. on Oct. 30, 2012 and the same view five years later on Wednesday, Oct. 11, 2017. (AP Photo/Charles Sykes, Julio Cortez) 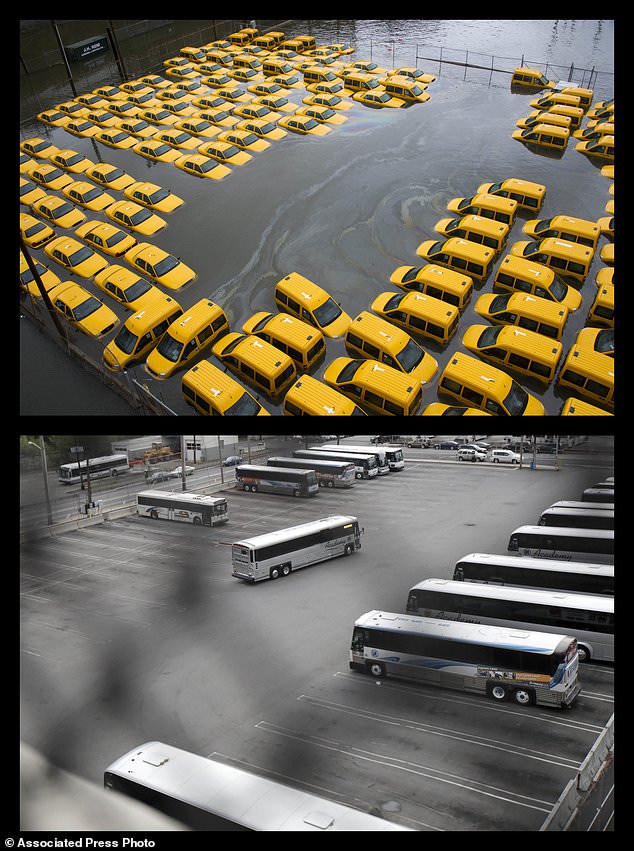 This combination of photos shows yellow cabs in a flooded parking lot in Hoboken, N.J., on Tuesday, Oct. 30, 2012 in the aftermath of Superstorm Sandy, and buses in the same spot five years later on Wednesday, Oct. 11, 2017. (AP Photo/Charles Sykes, Julio Cortez) 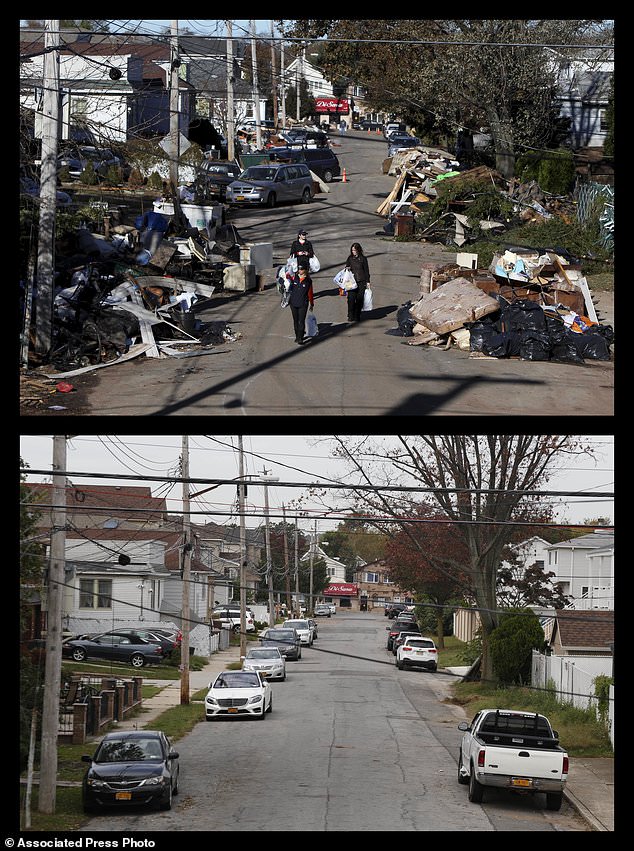 This combination of photos shows debris piled on a street in the New Dorp neighborhood of Staten Island, N.Y., in the aftermath of Superstorm Sandy and the same view five years later on Wednesday, Oct. 11, 2017. (AP Photo/Seth Wenig, File) 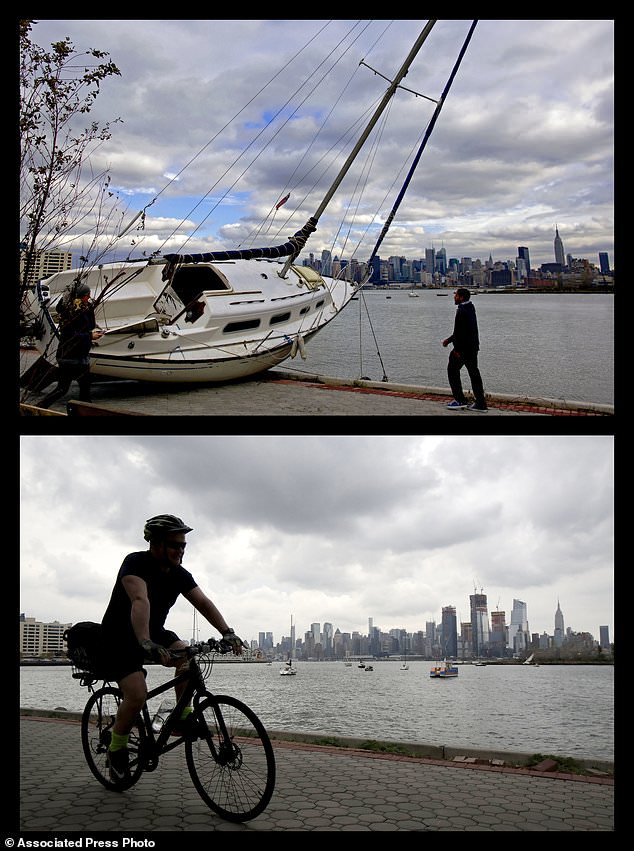 This combination of photos shows a sailboat tossed onto a waterfront pathway in Hoboken, N.J., on Wednesday, Oct. 31, 2012 in the wake of Superstorm Sandy and the same view five years later on Wednesday, Oct. 11, 2017. The Manhattan skyline is in the background. (AP Photo/Craig Ruttle, Julio Cortez) 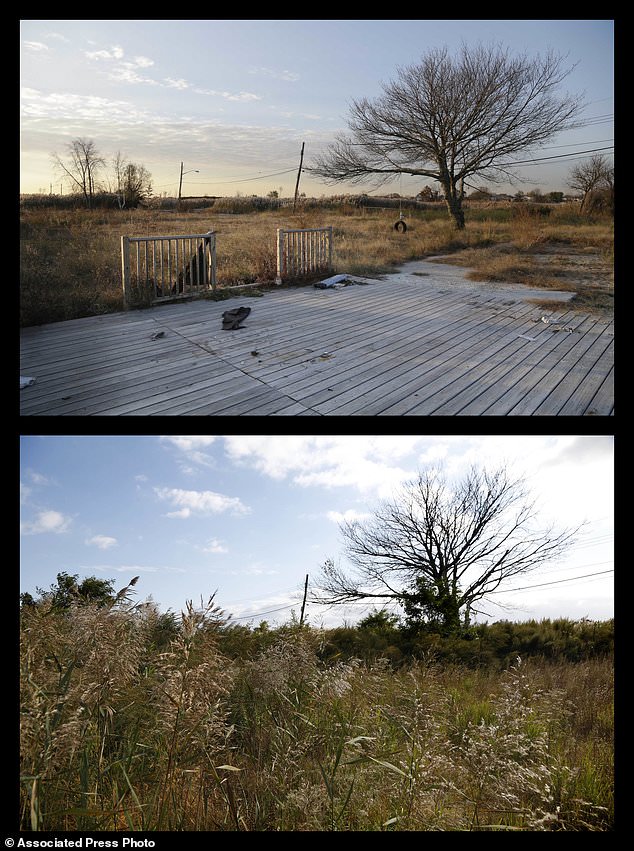 This combination of photos shows the remains of a house destroyed by Superstorm Sandy in the Oakwood section of Staten Island, New York, Tuesday, Oct. 29, 2013 and the same view five years later on Thursday, Oct. 12, 2017. (AP Photo/Seth Wenig)