Recycling in England has dropped in the last year

Recycling rates in England are going into reverse, while Britain burns more rubbish than ever, it emerged last night.

A boom in building incinerators, and the cheaper cost of using them, has convinced councils to burn more waste as recycling figures stagnate.

As the Daily Mail highlighted in July, some local authorities are burning 80 per cent of all residual waste, including recyclable plastic and paper.

In the 12 months to March, 50 of 123 councils incinerated more than half the household rubbish they collected, including plastic and paper, official figures released yesterday revealed. The worst are in London. Westminster burned 82 per cent of all household and recyclable rubbish.

Less than half of all household waste (45.2 per cent) was recycled in 2017 – a minuscule rise of just 0.3 per cent on the previous year. The UK now seems unlikely to reach the EU-enforced target of 50 per cent recycling in the next two years (stock)

The Western Riverside Waste Authority, which covers Hammersmith and Fulham, Kensington and Chelsea, Lambeth and Wandsworth, incinerated 79 per cent, as did Lewisham and Tower Hamlets. Slough, Kirklees, Sunderland, Portsmouth and Birmingham councils all incinerated at least 70 per cent of all plastic, paper and household rubbish.

But while more rubbish is going up in flames, the amount of plastic we are recycling has fallen. In England, the amount of local waste recycled fell 3.5 per cent in a year to 10.9million tons. But once ‘bottom ash’ – metal left when rubbish is incinerated – is included, the overall recycling rate rose by 0.3 per cent to 45.2 per cent for the calendar year 2017, the Government says.

The proportion of waste we burnt has hit 42 per cent – around 10.8million tons – up 7 per cent in a year. Campaigners said the figures should be a ‘wake-up call’ for ministers, with the country on the brink of burning more waste than it recycles. The Government is committed to recycling 50 per cent of all waste by 2020 and 70 per cent by 2030, targets that now look impossible to achieve.

On current trends, we will soon be burning more than we recycle.

Incineration of waste has shot up by 74 per cent in four years.

In February, the Mail revealed that 21 incinerators have fired up since 2010, bringing the total to 44, with 18 more being built.

The method is said to pose possible health risks by releasing ultra-fine particles and harmful toxins, as well as adding to the build-up of greenhouse gases. Green Party peer Baroness Jones said: ‘It’s shocking that the UK is on the verge of burning more waste than it recycles.

‘The Government are ignoring the impacts on the climate and local air pollution. There is a logic to generating energy from the waste that we can not recycle or reuse, but it is meant to be a last resort.

‘The Government should put an immediate ban on the building of incinerators and introduce a charge that discourages burning and encourages reuse and recycling.’

Doug Parr, chief scientist for Greenpeace UK, said: ‘These figures should be a wake-up call for ministers. Efforts to improve recycling rates have stalled just when we would need to ramp them up if the UK is to meet its 2020 target.

‘And a lot of what counts as “recycled” plastic waste is actually being shipped off halfway around the world where we lose sight of it.’

The cost of collecting and sorting household rubbish should fall on waste producers, not councils, he said. Councils prefer incineration to landfill because the energy released can be used to power homes, while the tax on landfill of around £88 a ton will rise to £91 next year. 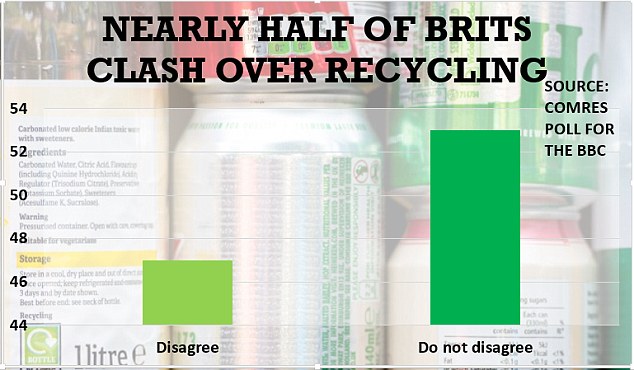 Analysis, by the BBC, suggests that recycling rates are being hindered by the myriad of different rules which are in play up and down the country. It found that nearly half (47 per cent) of Britons asked said they disagree about what should and should not be recycled

Choc boxes that are 40% packaging

More than 40 per cent of some Christmas chocolate boxes is packaging, most of which ends up in the bin, a survey has found.

Of 13 best-selling boxes, Ferrero Rocher Collection was the worst offender with 42 per cent of the total weight taken up by packaging – and only 11 per cent of that packaging was recyclable.

Waitrose came second at 30.3 per cent of the total pack weight, however the supermarket product was better than many big brand alternatives as a relatively high percentage is easily recyclable.

Some 29.4 per cent of the weight of Thorntons Continental Selection is packaging, with 22.6 per cent for Cadbury’s Milk Tray.

Marks & Spencer’s The Big One Selection had the least packaging at just 8.5 per cent, however some 29 per cent of the materials cannot be easily recycled.

The research by Which? suggests confectionery giants are fuelling waste and pollution, often using plastic materials that cannot easily be recycled.

Recycling rates are expected to get worse as China has stopped accepting most British plastic, paper and card for recycling.

Shlomo Dowen, of the UK Without Incineration Network, said: ‘An incineration tax is urgently needed.’ Simon Ellin, of the Recycling Association, said: ‘We are producing too much low grade material, plastic pots, tubs and trays, not designed for recyclability so we are having to send it to incinerators.’

Last year the amount of plastic recycled fell by 5,000 tons or 1 per cent, paper and card by 90,000 tons or 4 per cent and electronic and scrap metal waste by 36,000 tons or 6 per cent. The Daily Mail has led calls to increase plastic recycling with a bottle deposit scheme.

Westminster council said: ‘Our recycling rates are up this year and we’re working hard to improve. We want people to play their part in tackling single-use plastics, and have run a number of campaigns.’

Environment department Defra said: ‘Our upcoming Resources and Waste Strategy will set out plans to make sure we continue to reduce avoidable waste and recycle more.’

HOW MUCH RECYCLING ENDS UP IN LANDFILL?

Every day, millions of us drop a plastic bottle or cardboard container into the recycling bin – and we feel we’re doing our bit for the environment.

But what we may not realise is that most plastic never gets recycled at all, often ending up in landfill or incineration depots instead.

Of 30 billion plastic bottles used by UK households each year, only 57 per cent are currently recycled, with half going to landfill, half go to waste.

Most plastic never gets recycled at all, often ending up in landfill or incineration depots instead. Around 700,000 plastic bottles a day end up as litter

This is largely due to plastic wrapping around bottles that are non-recyclable.

Shockingly, less than 0.4 per cent of these are recycled.

Most cups are made from cardboard with a thin layer of plastic.

This lining keeps your coffee warm and stops the cardboard going soggy, but also makes the cup almost impossible to recycle.