Black Rhinos are alerted to danger by eavesdropping on the tweets of a bird species that perch on their backs – known as ‘the rhino’s guard’, a study found.

Scientists from Victoria University, Australia found black rhinos carrying red-billed oxpeckers were better at avoiding humans than those without a bird.

The rhinos are ‘as blind as a bat’, according to researchers, but the birds – known to feed on ticks on the rhino’s body – could help make up for their poor eyesight.

While conservation efforts have rebounded the black rhino’s numbers, the species remains critically endangered and under constant threat from poachers.

Scientists from Victoria University, Australia found black rhinos carrying red-billed oxpeckers were better at avoiding humans than those without a bird.

In Swahili, the red-billed oxpeckers are called Askari wa kifaru, or the rhino’s guard which served as inspiration for the study.

Study author Dr Roan Plotz, from Victoria University in Australia, said: ‘Although black rhinos have large, rapier-like horns and a thick hide, they are nearly blind.’

‘If the conditions are right, a hunter could walk within five meters of one, as long as they are downwind,’ Plotz said.

To study the role that oxpeckers might play, Dr Plotz and his team recorded the number of oxpeckers on two groups of rhinos they encountered in Africa.

About eight inches long with distinct red beaks, these birds are essentially hitchhikers, clinging to big-game animals such as rhinos to remove ticks, flies, and maggots from their hides.

The first group of, tagged with radio transmitters which allowed researchers to track them without being noticed by oxpeckers, carried the birds on their backs more than half the time.

While the untagged black rhinos they found carried no oxpeckers most of the time.

This suggests that other untagged rhinos that carried the birds might have avoided encountering the researchers altogether. 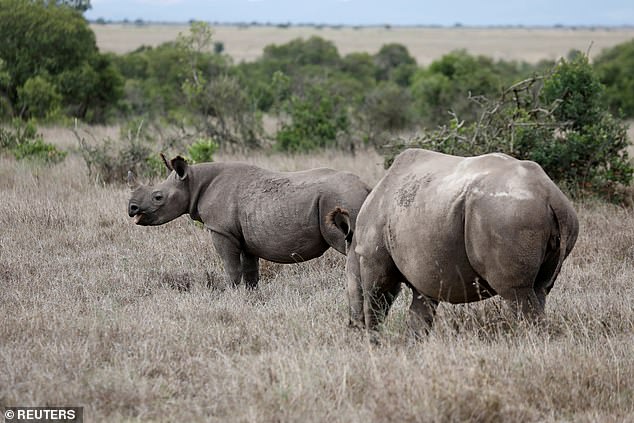 While conservation efforts have rebounded the black rhino’s numbers, the species remains critically endangered and under constant threat from poachers.

Dr Plotz said: ‘Using the differences we observed between oxpeckers on the tagged versus untagged rhinos, we estimated that between 40 and 50 per cent of all possible black rhino encounters were thwarted by the presence of oxpeckers.’

WHY IS THE BLACK RHINO POPULATION IN DECLINE?

Black rhinos have been killed in increasing numbers in recent years as transnational, organised criminal networks have become more involved in the poaching of rhinos and the illegal trade in rhino horn.

Uncontrolled hunting in the colonial era was historically the major factor in the decline of black rhinos.

Today, poaching for the illegal trade in their horns is the major threat, according to the WWF.

Powdered horn is used in traditional Asian medicine as a supposed cure for a range of illnesses – from hangovers to fevers and even cancer.

The recent surge has been primarily driven by the demand for horn by upper-middle class citizens in Vietnam. As well as its use in medicine, rhino horn is bought and consumed purely as a symbol of wealth.

Even when researchers were able to locate the tagged rhinos, the oxpeckers’ alarm calls still seemed to play a role in predator defense.

The team ran a human approach experiment where one researcher would walk towards the rhino from crosswind while a colleague recorded the rhino’s behaviour.

They recorded the number of oxpeckers carried, the rhinos’ behaviour upon approach, and the distance of the researcher when either the rhinos became vigilant or, if undetected, it became unsafe to get any closer.

Dr Plotz said: ‘Our experiment found that rhinos without oxpeckers detected a human approaching only 23 per cent of the time.

‘Due to the bird’s alarm call, those with oxpeckers detected the approaching human in 100 per cent of our trials and at an average distance of 61 meters – nearly four times further than when rhinos were alone.’

The team say that the more oxpeckers the rhino carried, the greater the distance at which a human was detected – with multiple birds amplifying the warning.

‘These improved detection and distance estimates may even be conservative, because they don’t take into account the untagged rhinos carrying oxpeckers that the team could not detect,’ said Plotz.

Researchers found when a rhino heard the oxpecker alarm call, it nearly always reoriented itself to face downwind, to their sensory blind spot.

‘Rhinos cannot smell predators from downwind, making it their most vulnerable position. This is particularly true from humans, who primarily hunt game from that direction,’ Plotz added.

Some scientists even believe oxpeckers may have evolved this adaptive behaviour as a way to protect their source of food – the rhinos.

‘Rhinos have been hunted by humans for tens of thousands of years, but the species was driven to the brink of extinction over the last 150 years,’ said Plotz.

‘One hypothesis is that oxpeckers have evolved this cooperative relationship with rhinos relatively recently to protect their food source from human overkill.’

Despite this closely tied relationship, oxpecker populations have significantly declined, even becoming locally extinct in some areas. 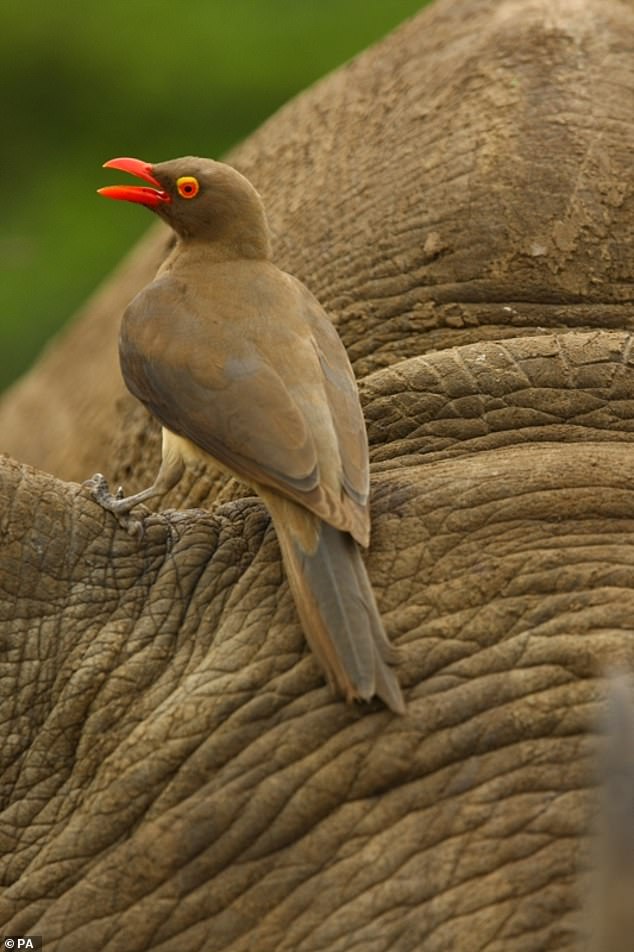 Researchers found when a rhino heard the oxpecker alarm call, it nearly always reoriented itself to face downwind, to their sensory blind spot

Based on the study’s results, reintroducing the bird back into rhino populations may bolster conservation efforts.

Dr Plotz said: ‘While we do not know that reintroducing the birds would significantly reduce hunting impacts, we do know oxpeckers would help rhinos evade detection, which on its own is a great benefit.

Dr Plotz says that these findings, inspired by the Swahili name, also highlight the importance of local knowledge.

He added: ‘We too often dismiss the importance of indigenous people and their observations.

‘While western science has been incredibly useful, there are many insights we can learn from indigenous communities.’

Black rhinos are native to eastern and southern Africa and are classed as ‘critically endangered’ by the International Union for Conservation of Nature (IUCN).

A recent report from the organisation found the black rhino population to be gradually rising at an annual rate of 2.5 per cent.

Despite the increase in numbers, poaching remains a major threat for the animals.

The research has been published in the journal Current Biology.