Four men including AFL umpire Michael Pell have been arrested in relation to the potentially suspicious Brownlow betting investigation that was triggered by information tendered by a partner betting agency.

The AFL betting partner had relayed information surrounding potentially abnormal betting patterns on the voting for the AFL best and fairest medal which led to an investigation that saw multiple other betting agencies also notice these patterns.

A betting agency was alerted to a punter or punters placing bets on the votes of players in different matches and winning every time. A red flag appeared beside his name at the end of the count.

Using that information, the AFL checked betting patterns with their other betting partners and found the same person/people had placed similar Brownlow bets with them.

Carlton captain Patrick Cripps won the 2022 Brownlow Medal, an award given by polling the most votes during regular season games. AFL field umpires are the ones who carry out the votes.

‘In the days following the 2022 Brownlow Medal count, the AFL was made aware of potential suspicious activity by one of our betting agency partners and the AFL Integrity unit immediately gathered further information,’ the AFL’s General Counsel Andrew Dillon said in a statement.

The AFL’s integrity unit worked with the betting agency to gather further information alongside Sports Integrity Australia and Victoria Police.

Police are investigating how many matches may have potentially had votes released and exactly how much money was awarded from the bets.

At this stage, authorities have no information to suggest the outcome of the votes were impacted.

‘The allegations relate solely to the leaking or improper communication of the 3, 2, 1 voting outcomes of some specific matches during the season,’ Mr Dillon said.

‘Post-game, the Brownlow votes are sealed and stored in a secure off-site location and not opened until they are delivered on stage on Brownlow night. The sealed vote cards are audited throughout the season by KPMG.’

The league says police confirmed to it that one of the four men interviewed and since released is an umpire. 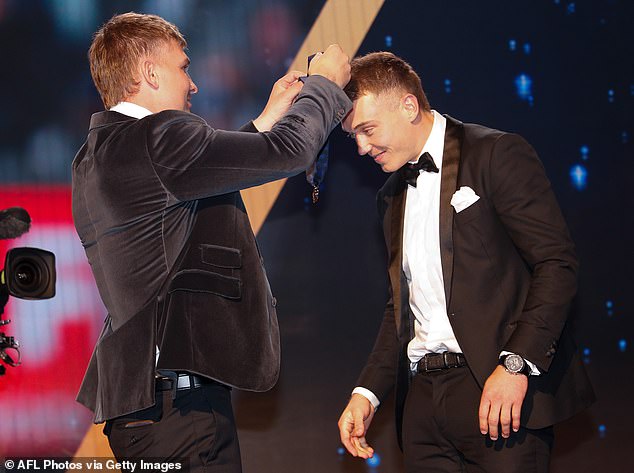 A 32-year-old Glenroy man was interviewed over the offence of engaging in conduct that corrupts or would corrupt a betting outcome. He is expected to be charged on summons.

A second 32-year-old man from Glenroy was interviewed on the offence of using corrupt conduct information for betting purposes. He is expected to be charged on summons.

A 27-year-old Drouin man was interviewed for the offence of using corrupt conduct information for betting purposes and is expected to be charged on summons.

The final man, a 29-year-old from Oak Park, was interviewed on the offence of using corrupt conduct information for betting purposes and was released pending further inquiries. 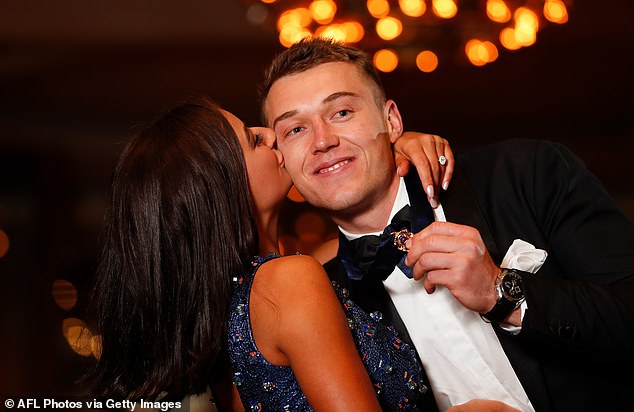 The offences carry up to 10 years imprisonment.

‘Victorians are well known for their love of AFL and in particular, the prestigious Brownlow Medal award, but equally they want to know that there is integrity, fairness and honesty behind this award,’ Commander Deb Robertson said in a statement.

Sport Integrity Australia confirmed it was supporting Victoria Police and the AFL in the inquiry, but did not comment further.Cripps won this year’s medal, polling 29 votes.