A diet rich in processed foods and red meat, refined grains and sugary drinks increases the risk of bowel cancer by a third, warns new research.

The foods and drinks highlighted in the study are known to cause inflammation, in turn increasing bowel cancer risks.

The risk is even higher among overweight or obese men and lean women, as well as men and women who do not drink alcohol, according to the Harvard University study.

Its findings suggest that President Trump’s notorious diet of burgers, fries and Diet Coke could put him in grave danger of cancer, in spite of the clean bill of health he received on Friday.

Though he is currently healthy, President Trump’s penchant for steak could raise his bowel cancer risk by 44 percent if he doesn’t eat some healthier foods, the new Harvard study found

In the study, published in JAMA Oncology, researchers explained that what people eat can influence inflammation in the body as measured by inflammatory biomarkers.

Inflammation plays a role in cancer development – including bowel cancer – the umbrella term for colon or rectal cancer.

On Tuesday, President Trump’s official physician Dr Ronny Jackson revealed in a press conference that, at 29.9 BMI, the president is on the verge of obesity.

Though Trump was deemed ‘healthy,’ Dr Jackson suggested a better diet and exercise – which, except for golf, Trump eschews – could extend the president’s life expectancy.

Bowel cancer is the fourth most common type of cancer diagnosed in the US, where the American Cancer Society anticipates there will be 137,250 new cases in 2018.

It is also the second most deadly cancer, killing more than 50,000 Americans a year.

The study followed 121,050 adults for 26 years, documenting their health statistics and diets.

In particular, the research used an empirical dietary inflammatory pattern (EDIP) score based on 18 food groups that have the potential to cause inflammation in the blood vessels. 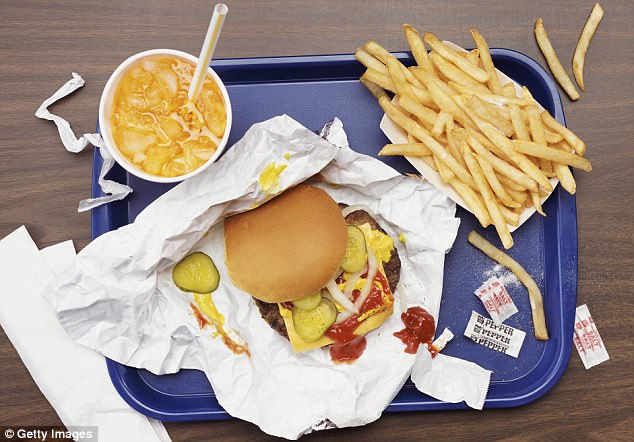 Western diets rich in red meat (like burgers), processed foods (like fries) and sugary drinks (like soda) cause inflammation, raising bowel cancer risks by one third, a new study found

The researchers found that those who ate the most pro-inflammatory diets reported lower physical activity, higher BMI, and were more likely to have diabetes.

‘Men that were overweight or obese have a much higher risk of developing colorectal cancer,’ he added.

They were also less likely to be using multivitamins and reported lower intakes of dietary fiber, dietary calcium, and whole grains, than those consuming the most anti-inflammatory diets.

Men whose diets fell into the most inflammatory category – rich in red meats and processed foods – were at a 44 percent greater risk of developing bowel cancer than were men eating the most anti-inflammatory foods.

The Western diet is loosely defined as one full of fatty and sugary foods, such as burgers, fries and soda.

People often eat foods that are high in

Health effects have been linked to things such as hypertension, heart disease, diabetes, obesity, colorectal cancer and dementia.

Overweight and obese men were at an even greater risk: 48 percent above others.

For women, poor diet was linked to a 22 percent higher risk, and diet accounted for a 32 percent overall difference in risks for both men and women.

Several studies have found anti-inflammatory drugs, such as aspirin, can reduce the risk bowel cancer development.

But rather than prescribing aspirin because of its side effects, experts said a safer option was to choose foods with anti-inflammatory properties.

Aspirin can cause bleeding in the bowl.

‘We don’t know who will or who won’t have that,’ said Dr Tabung, ‘but we can say for sure that diet is a safer option, if we can change to diets that do not contribute inflammation to the body.’

These diets would be rich in green leafy vegetables, dark and yellow vegetables, coffee and tea and low amounts of red and processed meats, refined grains and sugary drinks.

Dr Charles Fuchs of Yale Cancer Center in Connecticut added: ‘The past several decades have documented the fact that diet and lifestyle factors are clear risk factors for developing colorectal cancer.’

He said that a number of food and diet choices, with a number of specific foods ‘including red meat, western pattern diets, as well as what’s often referred to energy excess, including obesity and sedentary lifestyles,’ contribute to mounting cancer and overall health risks.

‘So recognizing a number of factors drive the risk of colorectal cancer we believe is important in the US and western countries,’ Dr Fuchs said.

But Dr Tabung says it’s never too late to make a change: ‘This all points to the opportunity that we have in diet, body weight and physical activity. These are all lifestyle factors that, if intervened on at any time could lead to much higher health benefits.’