A popular local cafe has been forced to shut its doors just weeks after reopening as customers refuse to follow social distancing rules to slow the spread of coronavirus.

Its closure comes as the state recorded another 64 cases of positive coronavirus cases on Tuesday, forcing 36 Melbourne suburbs into lockdown.

The cafe’s owner, Sue Cordina, took to Facebook to share the news, saying she had to stand her ground in order to keep her staff safe. 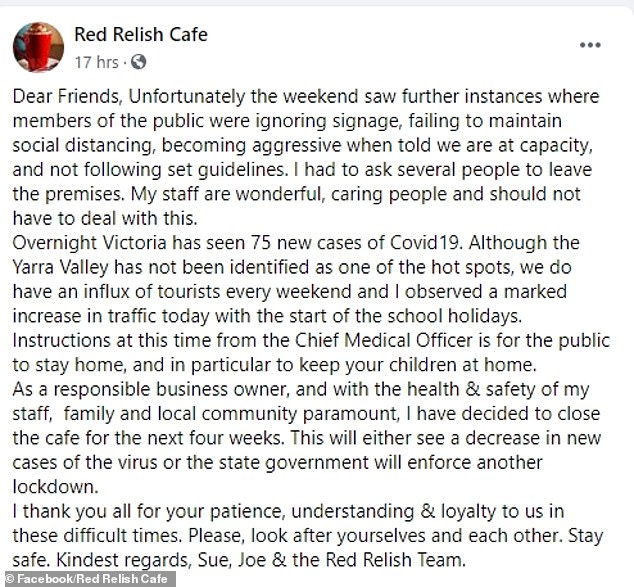 The cafe’s owner, Sue Cordina, took to Facebook (pictured) to say she was concerned about her ‘wonderful and caring staff’

‘Dear Friends, Unfortunately the weekend saw further instances where members of the public were ignoring signage, failing to maintain social distancing, becoming aggressive when told we are at capacity, and not following set guidelines,’ the post read.

‘I had to ask several people to leave the premises. My staff are wonderful, caring people and should not have to deal with this.’

She explained that despite the Yarra Valley not being identified as a hotspot, Ms Cordina noted an influx of tourists coming in with the start of school holidays.

In order to keep her staff and other safe, Ms Cordina decided to follow the Chief Medical Officer’s order for the public to stay at home.

‘As a responsible business owner, and with the health and safety of my staff, family and local community paramount, I have decided to close the cafe for the next four weeks,’ her post continued.

‘This will either see a decrease in new cases of the virus or the state government will enforce another lockdown.

‘I thank you all for your patience, understanding & loyalty to us in these difficult times. Please, look after yourselves and each other. Stay safe.’

In addition to her post, Ms Cordina told 3AW’s Neil Mitchell that a customer came in over the weekend and boldly revealed they had been in contact with a friend who had the virus – but did not feel the need to self isolate. 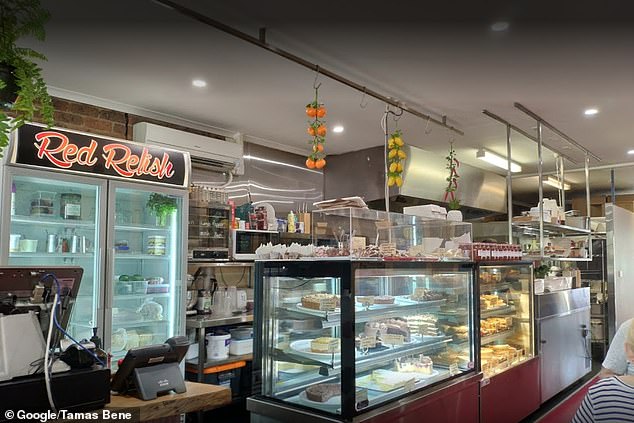 ‘As a responsible business owner, and with the health and safety of my staff, family and local community paramount, I have decided to close the cafe for the next four weeks,’ the post read

On Tuesday, the state’s premier Daniel Andrews announced lockdowns of ten postcodes across the state which have recorded an increase in coronavirus cases.

As of 11.59pm on Tuesday, people living within the postcodes are under a stay at home order until at least July 29.

People are only allowed to leave their homes for four reasons: for care or caregiving, to exercise, to purchase food and other essential items, or to go to work or school.

Flights into Victoria will also be diverted to other states and an inquiry will be held into the hotel quarantine process.

The state currently has 321 active cases.