Boston baseball fans were treated to a historic case of déjà vu on Tuesday night as San Francisco Giants rookie Mike Yastrzemski homered in his first game at Fenway Park 36 years after his grandfather, Red Sox icon Carl, played his final game at the stadium.

‘Being able to do that in front of friends and family was super special,’ Mike Yastrzemski told reporters after the Giants won, 7-6, in 15 innings. ‘I’m just glad that they got to make it for it.’

Carl, 80, met with Mike, 29, at Fenway prior to Tuesday’s game but opted to stay out of the spotlight to ease the tension around his grandson.

‘We thought about going in on Tuesday but decided against it,’ Carl, known as ‘Yaz,’ told The Boston Globe. ‘He’s going to have enough people bothering him, and it might be a little easier on him if I’m not there watching him.”

The Hall of Famer pledged to attend Wednesday’s game, along with more than 150 family and friends, many of whom attended St. John’s Prep with Mike in Danvers, Massachusetts.

Carl began with Boston as a rookie in 1961 and is remembered for his illustrious 23-year career that included 452 home runs, all of which came with the Red Sox. The son of a Polish potato farmer from Long Island peaked in 1967 when he won MVP honors and the American League Triple Crown as Boston came within a game of beating the St. Louis Cardinals to win the franchise’s first World Series since 1918. 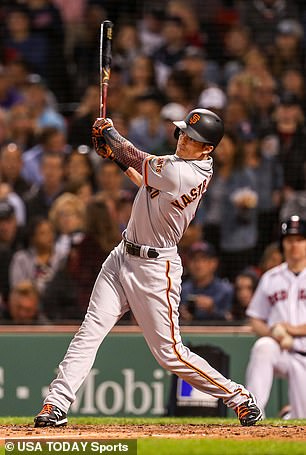 San Francisco Giants rookie Mike Yastrzemski (right) homered in his first game at Fenway Park, where his grandfather, Red Sox icon Carl (left), played throughout his 23-year career. The Hall of Famer is remembered for hitting 452 home runs for the Red Sox over his 23-year career, peaking in 1967 when he won MVP honors and the American League Triple Crown as Boston came within a game of beating the St. Louis Cardinals in the World Series 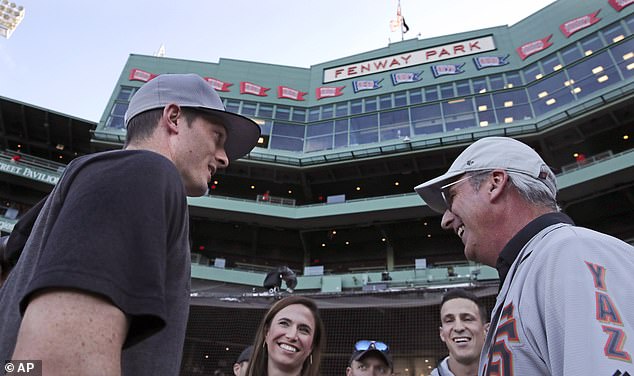 San Francisco Giants rookie Mike Yastrzemski, left, talks with family and friends after batting practice prior to a baseball game against the Boston Red Sox at Fenway Park in Boston. Carl Yastrzemski, Mike’s grandfather and a Hall of Famer, is planning to attend Wednesday’s game 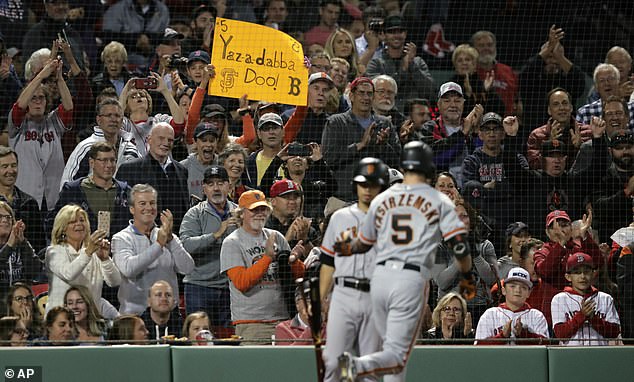 Mike Yastrzemski, who grew up rooting for the Red Sox, received an enormous round of applause before his first at-bat, but was struck out

Mike, who hails from nearby Andover, Massachusetts, appeared to have many other relatives in the crowd to enjoy the experience.

And thanks to Giants manager Bruce Bochy, Mike was particularly visible on Tuesday, batting leadoff and playing left field, where his grandfather famously replaced fellow Hall of Famer Ted Williams in 1961.

‘To be honest, sure, I wanted him to play left field tonight,’ Bochy told reporters after the game. ‘He gets the nod there. It’ll be a cool moment,’ Bochy said in a pregame interview.

‘I’m sure for a lot of people here, it’ll be a great reminder of all the great things his grandfather did, bringing special memories into their minds,’ he continued. ‘I look forward to it. I had a chance to meet Carl today and he came into the clubhouse and we sat and talked for a while, and so this is cool for everybody. The fans here in Boston, but us, too.’ Mike Yastrzemski fields a ball in left field a few feet away from Fenway’s famous ‘Green Monster,’ where his grandfather Carl patrolled for most of his 23-year Major League career Carl Yastrzemski led the American League in home runs, RBIs, and batting average in 1967 while winning MVP honors and helping push the Red Sox to their first pennant since 1946

Carl was particularly proud because Mike’s path to the majors was not an ordinary one.

Despite the expectations that came with the name, Yastrzemski, Mike toiled in the minor leagues for seven seasons before getting called up to the Majors this year, and capitalizing on the opportunity. Mike’s home run – the first by a Yastrzemski at Fenway since July of 1983 – was his 20th of the season. Carl Yastrzemski (pictured at old Yankee Stadium) remains a fan favorite in Massachusetts, where his grandson grew up rooting for the Boston Red Sox

‘The only way I can make any type of comparison would be to compare the ’67 season to this moment,’ Carl told NESN. ‘To play 700 games in the minor leagues, he always said he’d make it. I think that’s what I’m proud of the most, because of his sticking to it, not complaining. He’s a great kid, which is more important.’

‘I couldn’t be happier for him, and the year as a whole,’ Bochy, 64, agreed. ‘Getting called up here and playing the type of ball he is, having a chance to come here to Boston and play left field where his grandfather did and hit a home run in the first game, it’s hard to script out any better than what happened tonight for him.’

For Mike, the experience was incredible, but not daunting.

‘Playing here is cool, and I see it as part of my job and something I’ve always wanted to do. That doesn’t really overwhelm me,’ he said before Tuesday’s game. ‘To do it in a setting where I have so many fond memories with friends and family and have them be able to be here, it’s special.’

Mike, who grew up rooting for the Red Sox, received an enormous round of applause before his first at-bat, but was struck out.

‘The crowd reaction all night was incredible,’ Mike Yastrzemski said. ‘I can’t thank them enough for being supportive and just showing me some love when I’m on the opposing team. It’s unheard of and it was really special.’