Son Heung-min cleansed the trauma of his involvements in a horrific injury suffered by Andre Gomes with two goals to put Tottenham’s season back on the road to recovery.

Son struck twice inside four second-half minutes as Spurs beat Red Star convincingly in Belgrade to move within one win of qualification for the Champions League knock-out rounds.

For the Korean striker it must have come as a huge personal relief of return to normality of scoring goals after the wretched emotions of Sunday’s draw at Goodison Park which ended for him with a red card and tears. 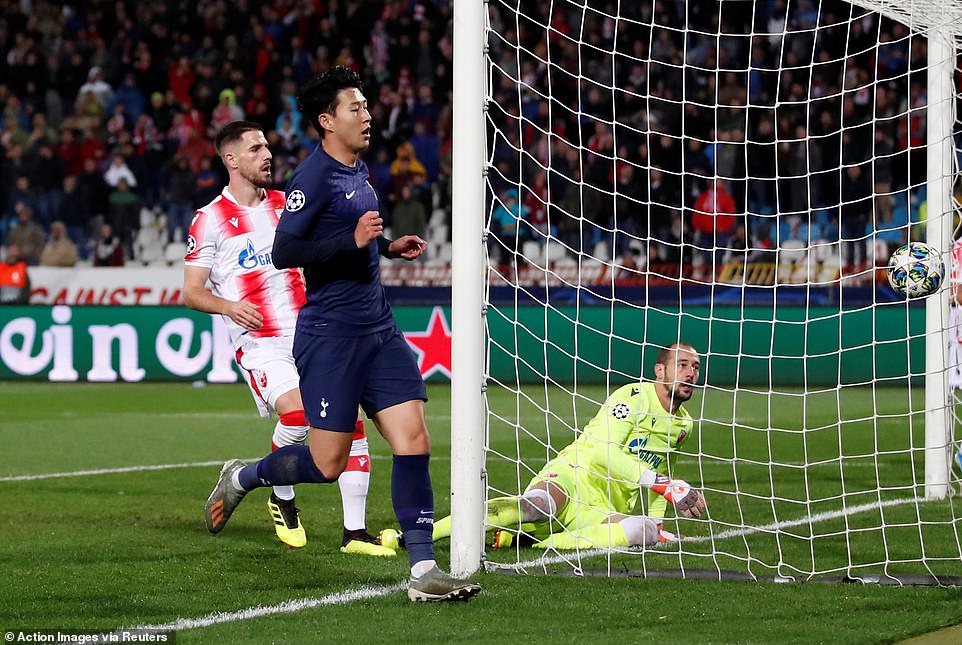 His innocuous trip had knocked Gomes off balance and he broke and dislocated his ankle as he collided with Serge Aurier.

Those near the incident were shaken by the Everton midfielder is on the mend after surgery and Son, it is appears, had refocused his mind, which all made for a good night for manager Mauricio Pochettino.

Not only was Son smiling again but Giovani Lo Celso scored on his first start for the club and offer Pochettino a glimpse of what the future might hold.

Three players in the final season of their Tottenham contracts were absent: Jan Vertonghen was injured and Toby Alderweireld and Christian Eriksen started on the bench.

Lo Celso, on loan from Real Betis, was preferred to Eriksen and sparkled on the ball and hinted at more to come with an explosive change of pace and creative contributions going forward.

Tanguy Ndombele continued to improve in the heart of midfield and played a vital role in the first two goals of the night. Ryan Sessegnon came on and created the fourth, scored by Eriksen with the help of a deflection.

Victory means Spurs must beat Olympiakos at home in their next fixture to be certain of qualifying from Group B and reaching the knock-out rounds of the Champions League for the third successive season.

They will also leave Serbia with spirits revived after winning away from home for the first time since the epic semi-final at Ajax in April.

Red Star’s atmospheric Rajko Mitic Stadium is about as far removed as you can find in the modern Champions League from the comfort and luxury of Tottenham’s new £1billion home and their supporters are well versed in the art of hostility. 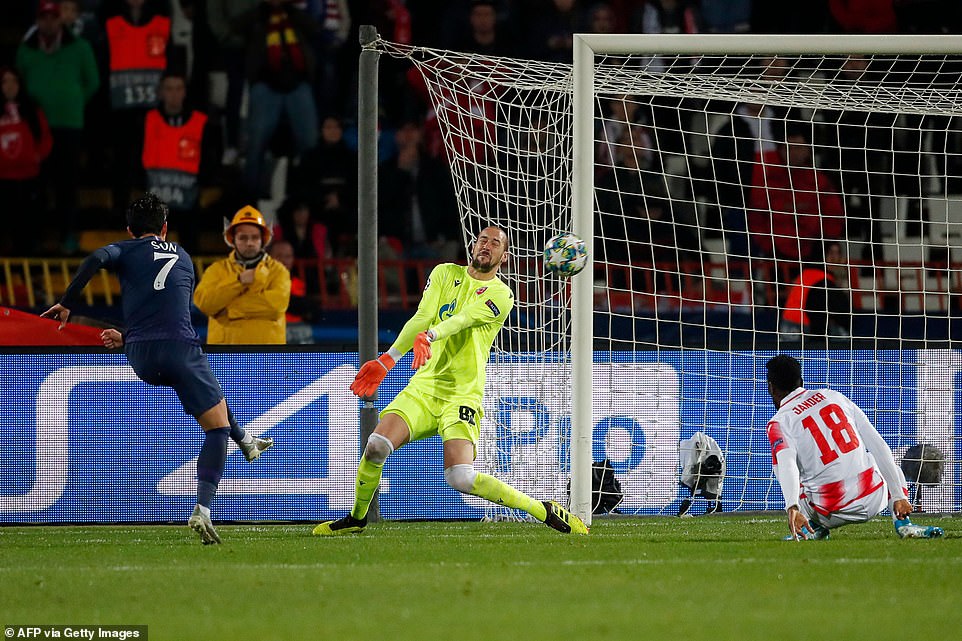 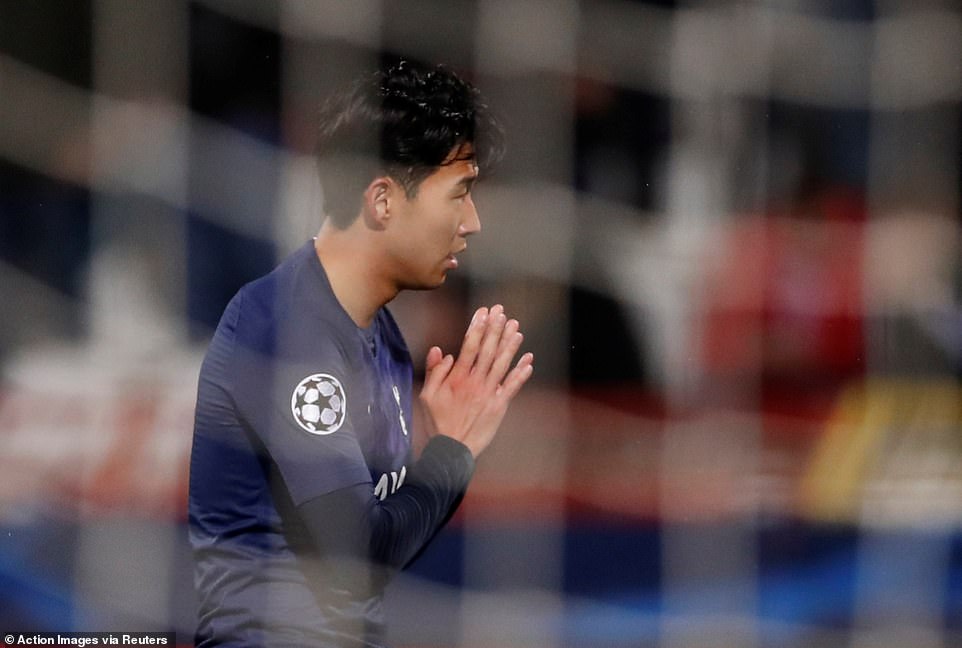 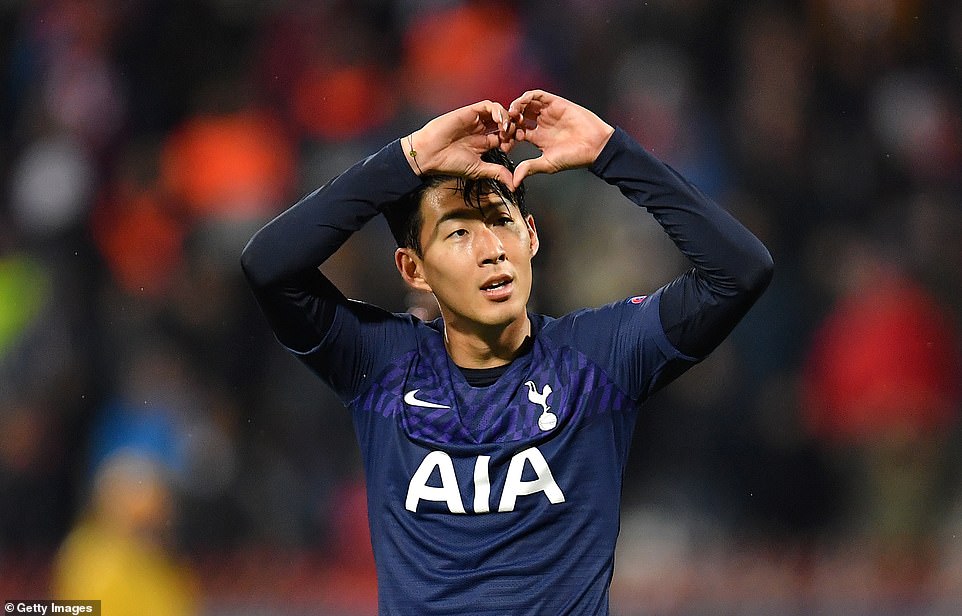 It was a year to the day since they celebrated a famous victory, beating Liverpool here in Belgrade as Jurgen Klopp’s team set out on the campaign which would culminate with their sixth European title.

Perhaps manager Vladan Milojevic was hoping his decision to start with robust centre-forward Milan Pavkov, who scored both goal in a 2-0 win against the Merseysiders, might create more problems for the English opposition.

Tottenham made a composed start. They are not in fluent form but they dominated the opening 20 minutes in midfield, moving the ball quickly and incisively.

Pochettino made five changes to the team held at Everton on Sunday and four to the team which thrashed Red Star in London, two weeks ago.

His urge to rotate and rest his players meant there was a first start for Lo Celso, who has been troubled by a niggling hip problem since his move on loan from Real Betis.

Lo Celso impressed wide on the right where he was deployed in front of Juan Foyth, a fellow Argentina international, at right-back, and there was a recall in central defence for Eric Dier.

For all their early control they did not carve open the Serbs as freely as they did in North London. Son pulled a low shot narrowly wide from an angle but they did not test goalkeeper Milan Borjan.

Paolo Gazzaniga was required to keep Tottenham level midway through the first half. There was a slip in defence by Foyth, who had started the game sloppily. Pavkov forged clear but Gazzaniga was able to block his effort out with a foot. 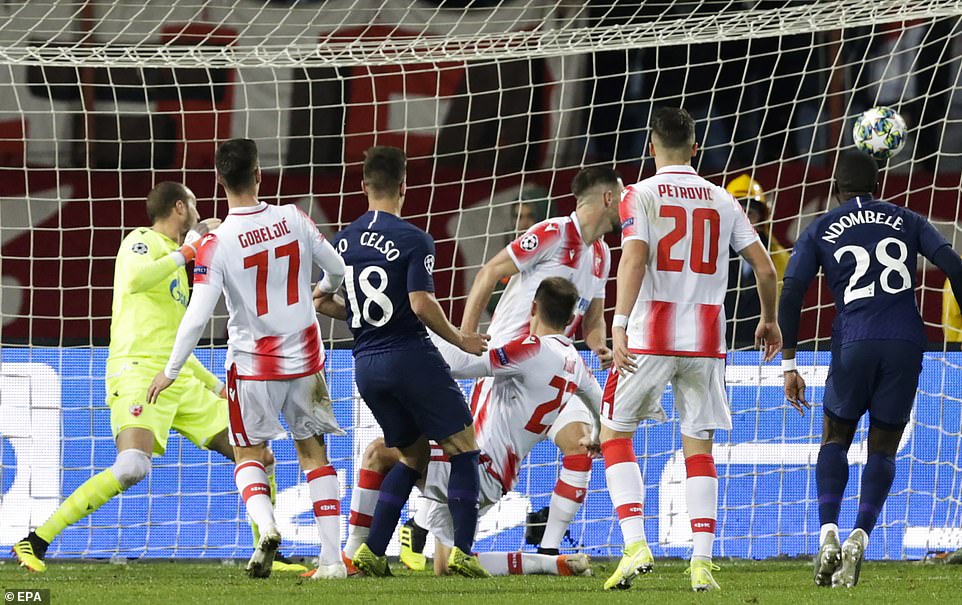 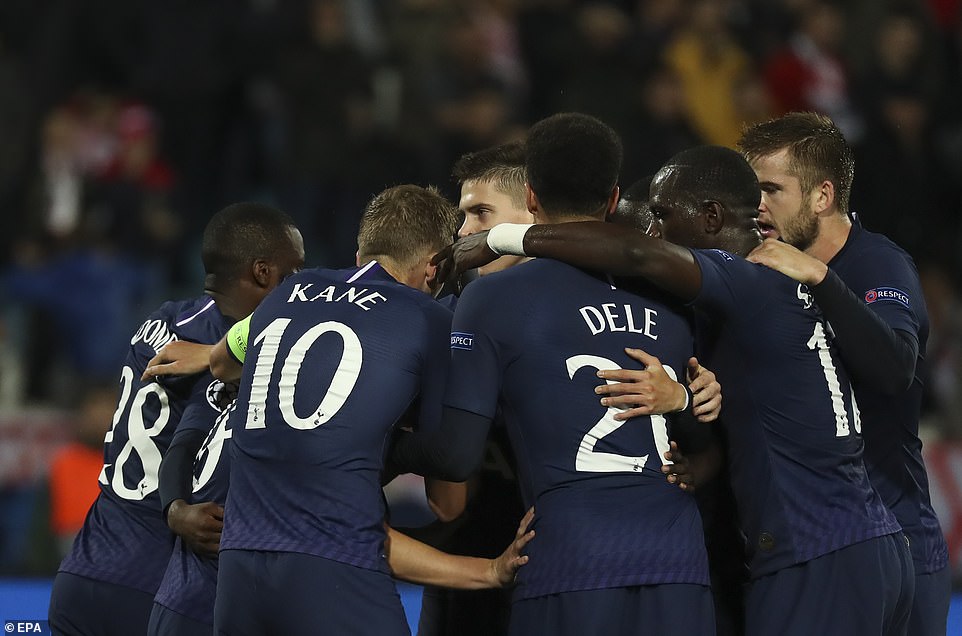 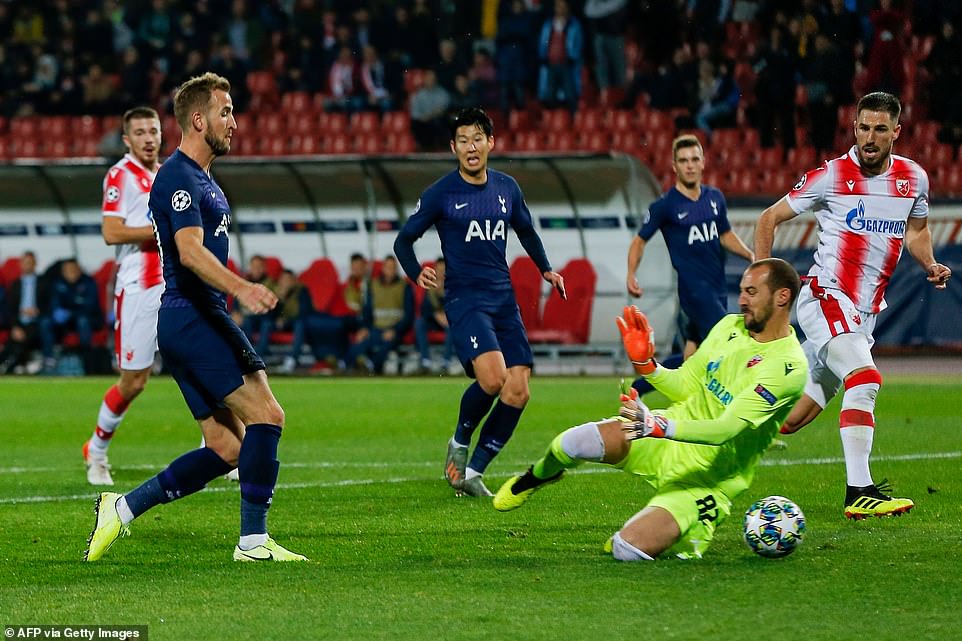 The goal came after a bizarre passage of play, where Tottenham hit the woodwork twice – first through captain Harry Kane 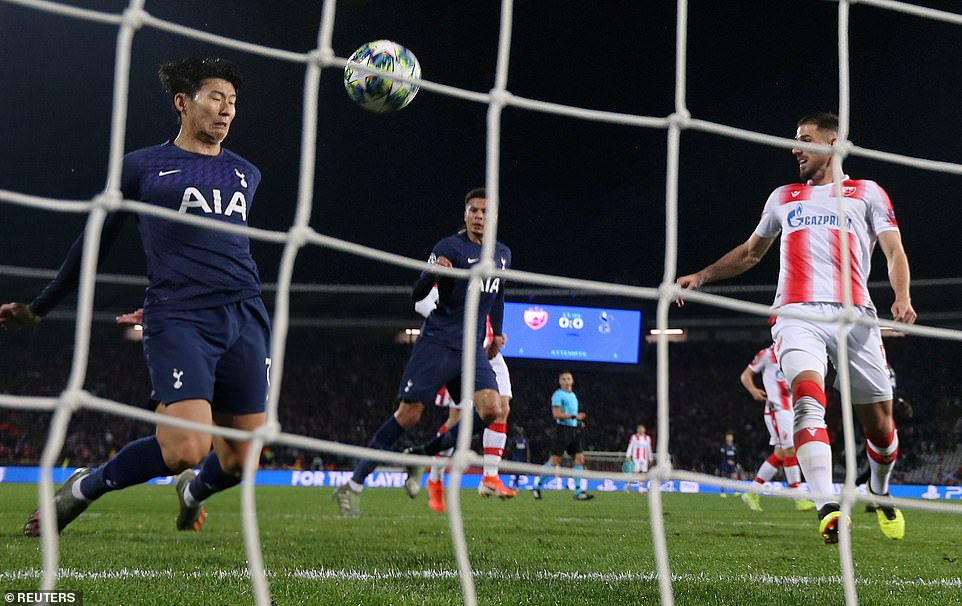 Spurs seized the initiative with an untidy but crucial goal in the 34th minute. Lo Celso won the won in midfield from and released Harry Kane. His first touch was heavy but he still managed to poke a shot under Borjan as the goalkeeper slid out at his feet.

Kane’s attempt struck the foot of a post but Spurs fought hard to keep the pressure on. An effort by Son was cleared off the line before Ndombele lifted a high cross towards Kane, who slammed a volley across the face of goal.

Son turned the ball against the bar when he ought to have found the net but Lo Celso pounced on the rebound and lashed the ball into the net.

Red Star responded before half time. Former Huddersfield winger Rajiv van La Parra wriggled free in the penalty area and slammed a shot into a post. Davinson Sanchez, sprinting back to recover, fired the rebound against his own bar. 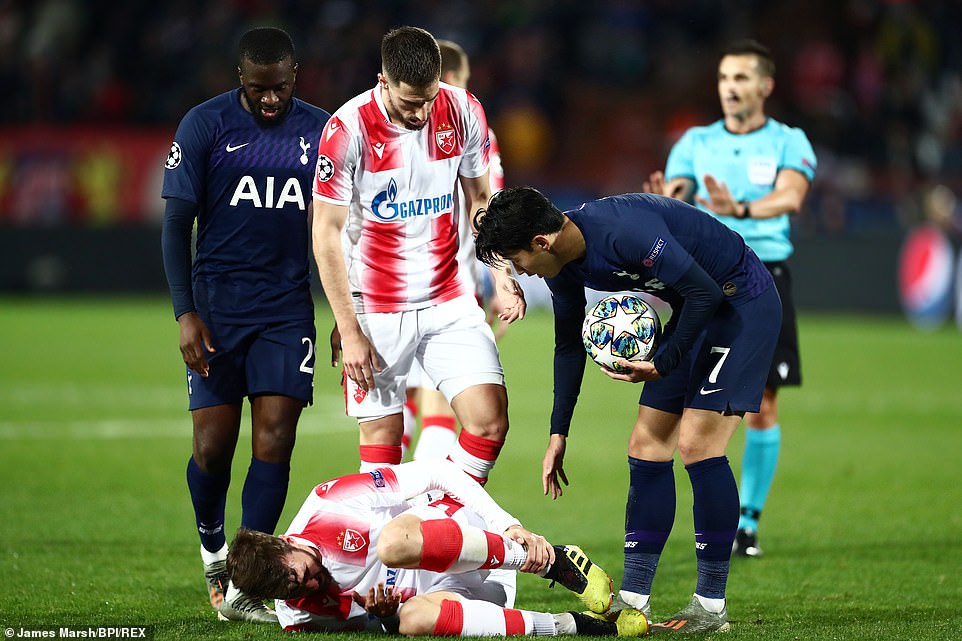 After the trauma of Sunday, Son checks on Nemanja Milunovic and apologises after a challenge during the second half 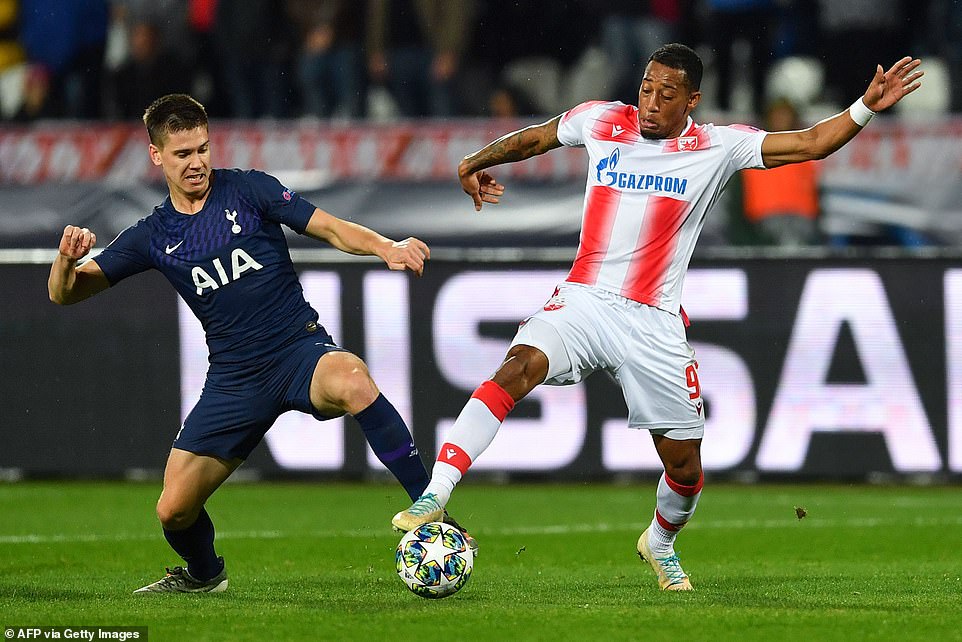 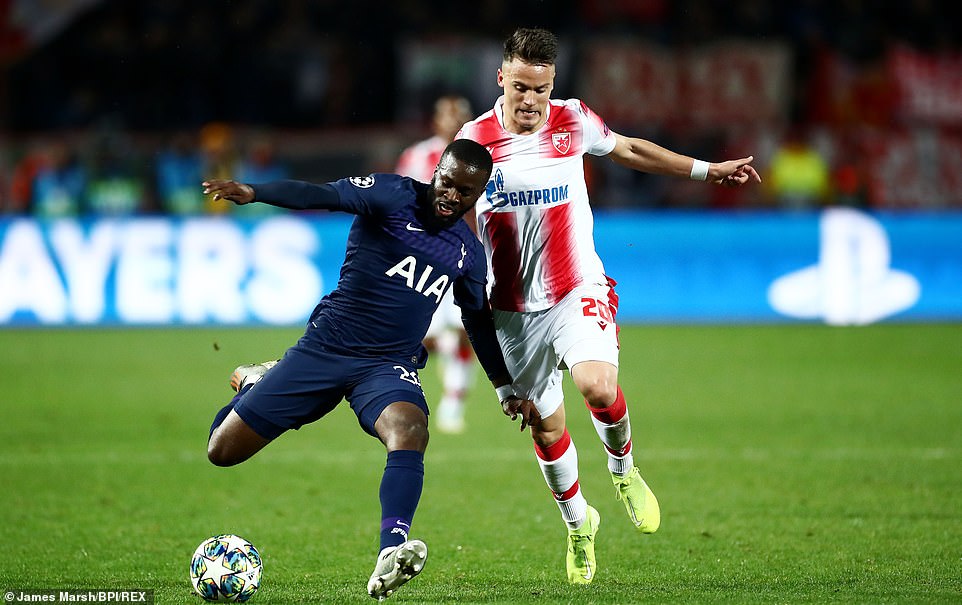 It was a warning to Tottenham that there was still work to do.

A mistake in defence by Sanchez prompted another scare soon after the interval but Pavkov failed to punish him and then Son stepped forwards to take the initiative with two goals which took his tally to the season for eight.

His first finished a move featuring Ndombele and Dele Alli with a crisp shot from an angle and his second was a close range finish from a low cross by Danny Rose.

This established enough breathing space for Pochettino to relax and enjoy the closing stages.

At last for the Spurs boss there is hope on the horizon and a place in the knock out rounds. Now to climb back up the Premier League. 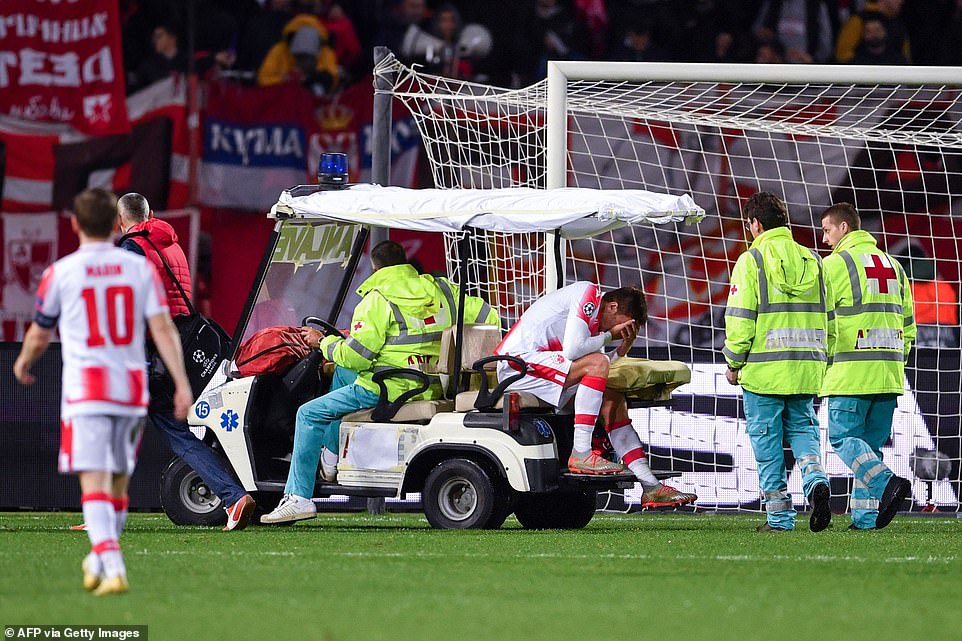 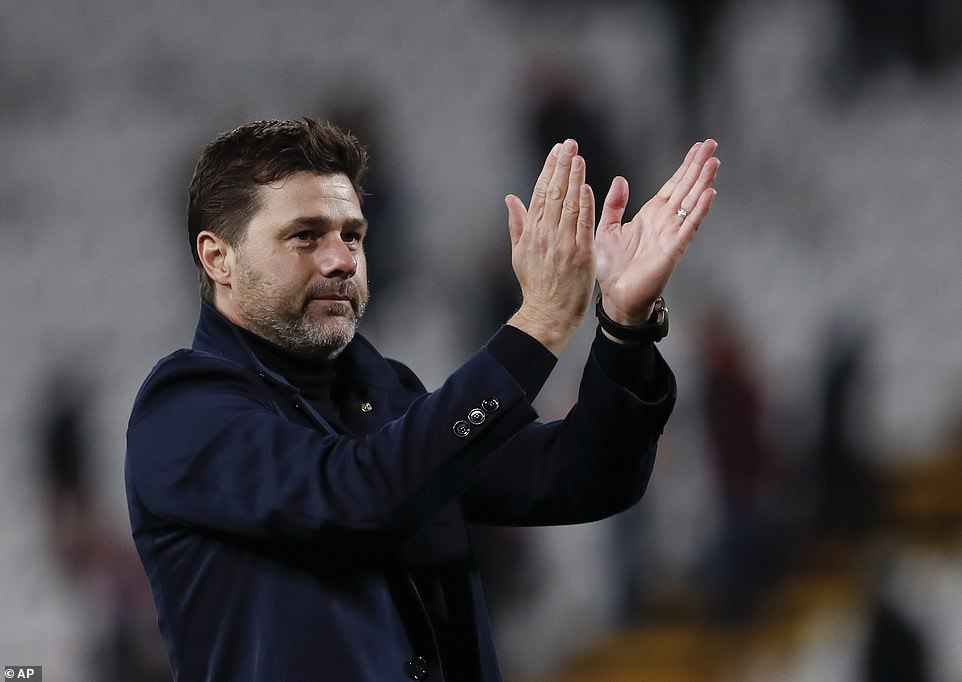 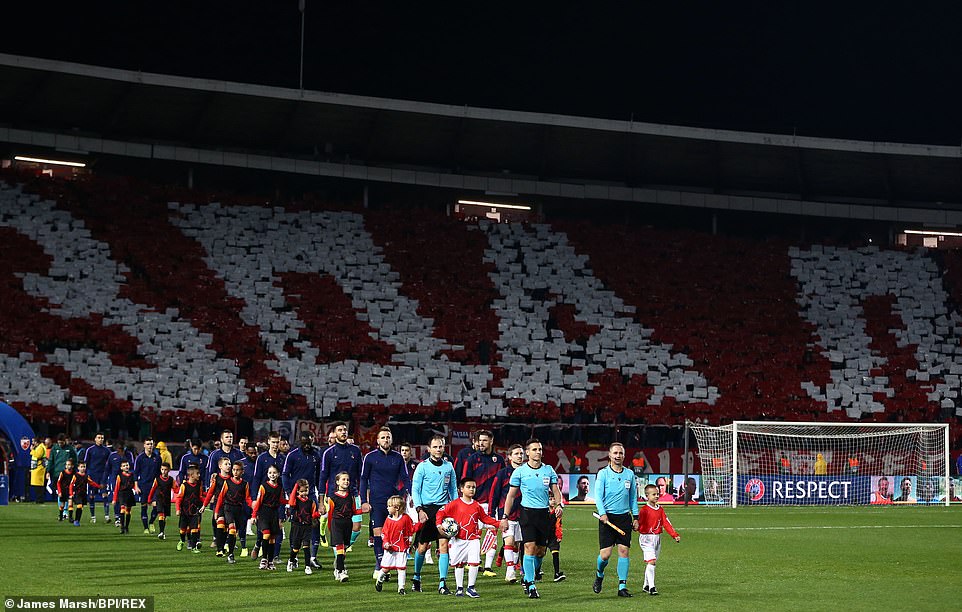