Most people have been ghosted at one point of another, but it typically happens after just a few dates – not a five year relationship.

But one woman has told how she vanished from her long-term partner’s life without a word of explanation, after finding him asleep  in bed with his ex.

The anonymous Reddit user, who is based in the US, took to the forum to reveal how she ‘ghosted’ her boyfriend of five years upon realising he was a cheat; deactivating her Facebook, blocking him on social media – and even moving to a new city.

The American anonymous Reddit user took to the chat forum to confess she ‘ghosted’ her boyfriend of five years, disappearing without explanation after discovering him asleep in bed with his ex

Explaining what prompted her extreme move on the thread, she wrote:’I came over to his house one morning to surprise him with breakfast and a video game he wanted, only to find him naked, asleep, and with his ex curled up in his arms.’

And while some may have had a few choice words to say to him upon discovering such a disturbing scene, she did the opposite.

‘He didn’t hear me come in, so I closed his bedroom door, and left his breakfast and game on the kitchen counter along with my key to his house,’ she continued. 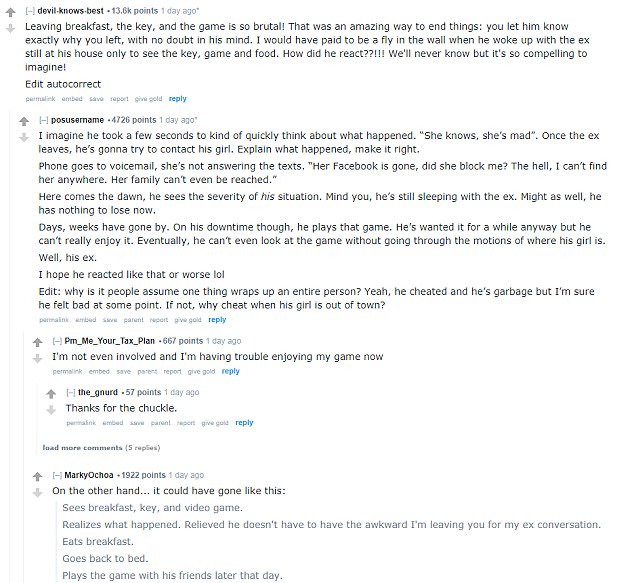 As well as blocking him on social media, she changed her phone number and even moved jobs and cities within a week of making the discovery

‘I went to my car, deactivated my Facebook, and blocked him on all other forms of social media. I then called my phone provider to change my number before driving off.’

Going the extra mile to ensure she disappeared from his life completely, she instructed her family to block him online, and even completely uprooted her life.

‘I texted family members and close friends that we were no longer together and to block him on social media, as well. I didn’t tell them why’, she said.

‘I was in a position to end the lease at my apartment early, and I started a new job in a different city later that week.’

Explaining the reason behind her actions, she admitted that she believed it was the ultimate revenge for his actions. 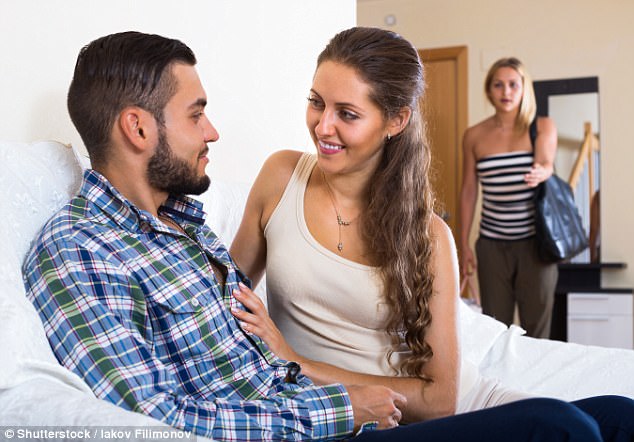 ‘I came over to his house one morning to surprise him with breakfast and a video game he wanted, only to find him naked, asleep, and with his ex curled up in his arms,’ she wrote

‘I completely removed myself from him and didn’t offer a shred of explanation or opportunity for dialogue. I disappeared from his life after his betrayal and I think it’ll not only help me to focus on myself without his presence, but I think completely shutting myself off from him will hurt worse than anything when he thinks on how good he had it with me these last 5 years,’ she concluded.

And her confession was soon flooded with comments from supportive users, who praised her braveness and determination.

‘That’s a really calm way to do it. You saved yourself the begging and apologies and potentially going through it all again. Well done, plenty of fish in the sea,’ one wrote.

Another user added: ‘No dealing with excuses and potentially weeks of nonsense. Just a clean break,’ while a third said: ‘With any luck, it’ll jar him into avoiding that absurd behaviour in the future, though it is doubtful.’

Her confession was soon flooded with comments from supportive users, who praised her braveness and determination

And one praised her ‘brutal’ tactic, writing: ‘Leaving breakfast, the key, and the game is so brutal! That was an amazing way to end things: you let him know exactly why you left, with no doubt in his mind. I would have paid to be a fly in the wall when he woke up with the ex still at his house only to see the key, game and food. How did he react??!!! We’ll never know but it’s so compelling to imagine!’

But another user pondered whether her reaction really was the ultimate revenge, questioning whether the boyfriend cared in the first place if he had cheated on her.

‘Well, considering he was cheating, she clearly didn’t mean that much to him,’ they wrote.

But others flooded the comment disagreeing, arguing that he must have had feelings after five years.

‘Everyone is commenting like they know the relationship. Many people cheat and they still care, but who knows,’ one wrote.

And another added: ‘Obviously what he did was wrong, but people often make spontaneous, chemically driven decisions. It may be that he will forever associate the game with a feeling of regret.’ 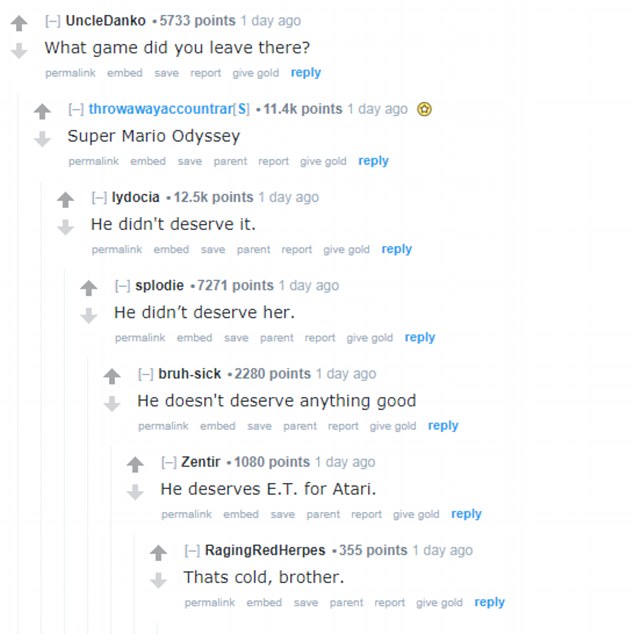 ‘That’s a really calm way to do it. You saved yourself the begging and apologies and potentially going through it all again. Well done, plenty of fish in the sea,’ one supporter wrote