A religious message written in the sky has awkwardly spelled out the mother of all swear words above Sydney Harbour.

The skywriter wrote ‘Trust in Jesus’ on Friday night as revellers flocked to Sydney Harbour for New Year’s Eve celebrations.

But some eagle-eyed viewers spotted a profanity as the wholesome New Year’s Eve message was being written.

In a post shared to Reddit on Saturday one Sydneysider managed to snap a picture of the message, pointing out the word ‘trust’ actually reads ‘c**t’ from another angle.

‘It’s all about perspective…’ the Redditor wrote.

Amused social media users were quick to comment on the post, with one user writing: ‘This is possibly the most Strayan thing that has been posted in 2022…’

‘What a beautiful ambigram,’ added a third. 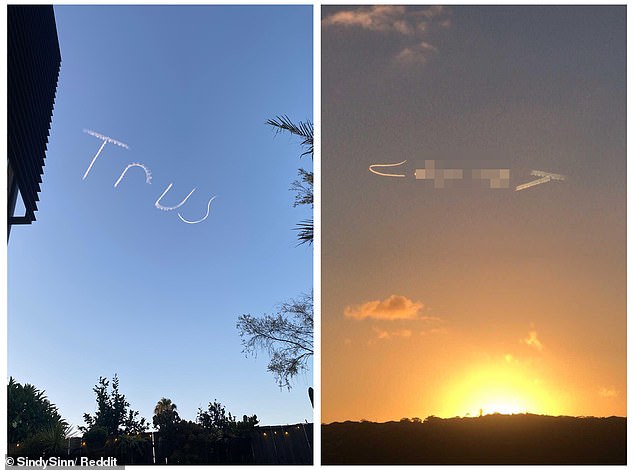 It’s not the first time a skywriter has drawn attention for its messaging.

The words wrote ‘VOTE NO’ appeared stretched across the sky outraging some Sydneysiders in the lead up to the 2017 marriage equality postal vote.

Earlier that year a skywriting company also drew the word ‘TRUMP’ in the sky during the Woman’s March.

While in 2019 the words ‘save unborn’ and ‘choose life’ were written during a debate over New South Wales’ abortion legislation.