A young woman is being slammed by Redditors for admitting she wants to break up with her boyfriend after he revealed he was raped as a child.

The 20-year-old woman wrote that she has been with her 24-year-old boyfriend for five months, and had been attracted to his tall, muscular physique and ‘dominant’ personality.

But since he recently broke down and told her that his stepbrother raped him when he was 11 years old, the woman said her perception of him has ‘shattered’ and she’s considering ending the relationship.

No compassion: A young woman is being slammed by Redditors for admitting she wants to break up with her boyfriend after he revealed he was raped as a chil

The woman, who is unidentified, has been unanimously condemned on Reddit.

Writing about her boyfriend, she said: ‘He’s tall, muscular, blonde with blue eyes. He’s also really dominant and works at a start up doing marketing. In general he’s very smart, funny, yadda yadda, you get it. I like him.

‘However even though our sex life is good he’s been having trouble performing starting a week and a half ago. I thought it was me at first so I asked him and he started to break down a bit before crying.

‘He’s just started seeing a therapist or “counselor” about his childhood.

‘Then he tells me that he was raped as an 11-year-old by his stepbrother, multiple times when he was young.

‘This floored me, as up until this point he seemed so macho and sort of like a “tough guy” and now he’s confessing to being raped by another man while completely being in tears and holding me.’

Though she at least ‘held him back and let him vent’ when he spoke to her, she soon ended up leaving and is now thinking of ending things.

‘I completely understand that it’s horrible being a rape victim but honestly I don’t know if I could see him the same way again. I had this image of him that’s completely shattered and honestly every time I see him text me I just feel weird now,’ she said.

‘My best friend thinks I should try to keep dating him for a bit but I’m really not attracted to him like I was before. We’re not broken up yet but I’m considering it kinda.’

Then, she asked her fellow Redditors whether she was an ‘a**hole’ for wanting to distance herself — and they’ve let her have it. 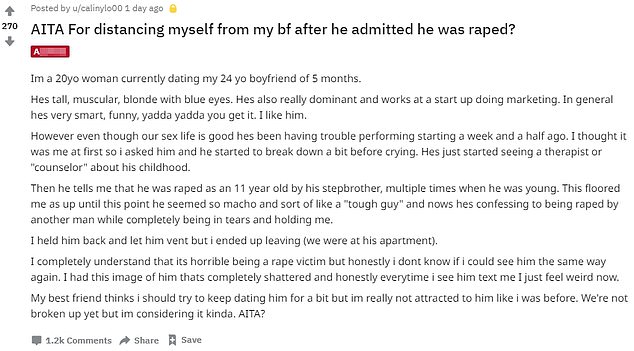 Breaking up: She shared her story in a section called ‘AmItheA**hole’

‘Do him a big favour and break up with him. Then hopefully he can get himself a nice girlfriend,’ wrote one person.

‘Your view of him was shattered because he was the victim of an awful, traumatic experience? Boohoo. He was raped. I hope nobody ever has to show you the kindness your boyfriend needs from you right now,’ wrote another.

Yet another person, whose comment has since been deleted by Reddit moderators, went on a lengthy rant that’s been applauded by thousands of others.

‘Holy f***ing shit. You’re a monster. You’re truly a horrible person and I honestly hope you never find love in your life again,’ the critic wrote.

‘You’re so lucky that you don’t have a single f***ing clue on what it’s like to be raped. Your boyfriend, who trusted you enough to show his feelings and confess a secret that’s probably been haunting his dreams and his waking moments for years, i a strong man for living through that.

‘He’s still “macho.” He’s still a “tough guy.” If you seem him as a lesser person because of something he couldn’t control, then you make me sick,’ the comment went on. 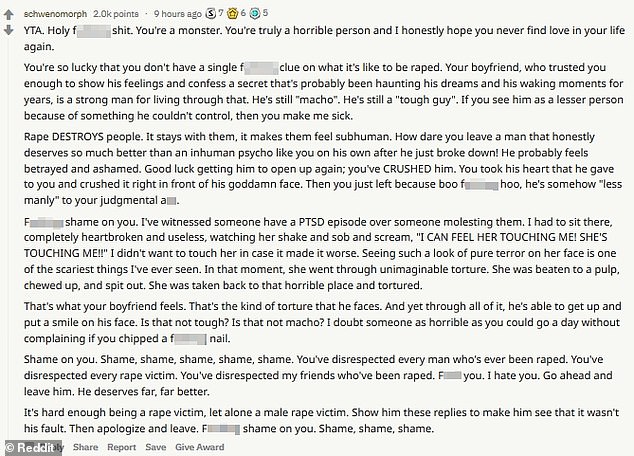 The worst! She was roundly slammed by commenters, including this one, who went on a lengthy rant — and was applauded for calling her out

Though the original poster has been overwhelmingly criticized, she has oddly continued to defend herself with more comments.

To one sexual assault survivor, she wrote: ‘First off I am completely sorry you had to go through sexual assault and I have so much respect for you as a survivor. Many of my closest friends are rape victims [whom] I advocate for.

‘But as a woman, just separating yourself, can you understand why I would just instinctively feel this way after seeing and gearing this?

‘Wouldn’t hearing that your boyfriend was penetrated by another man and seeing him cry excessively change your view of him when hes acting completely opposite? I think a lot of the posters here are men but I think women might be able to understand what I’m saying a bit better.’

To that, many women disagreed with her.

She also answered a woman who accused her of treating her boyfriend like ‘used goods,’ writing: ‘I don’t think of him as used goods at all. He definitely didn’t deserve what happened and I feel for him.

‘Honestly I hate his stepbrother so much, I want to feed him to wild dogs for doing this to us.’

When someone questions her use of the word ‘us’ here, she responded, ‘To our relationship. He obviously feels the worse trauma of course. I’m not denying that.’