If you ever find yourself regretting something you did or a choice you made, rest assured that it probably wasn’t as bad as the judgment calls that led to these pictures.

On Reddit, there’s a whole section dedicated to all things trashy, where users share the most eyebrow raising things they see in real life and online.

They explain: ‘/r/trashy is a celebration of trash: people, things, media, etc. that boldly and shamelessly violates social conventions and cultural norms. Satisfy our voyeuristic drives by sharing trashy images, videos, stories, and fashion. All forms of trash are eagerly welcomed.’

The page is a goldmine of awful etiquette, shockingly bad parenting, and — most of all — a complete lack of self awareness, and FEMAIL has rounded up some of the trashiest pictures of the bunch.

Won’t wash off! Redditors have shared some of the trashiest things they’ve ever seen, including this very permanent tattoo of a Tide Pod with the message ‘forbidden fruit’ 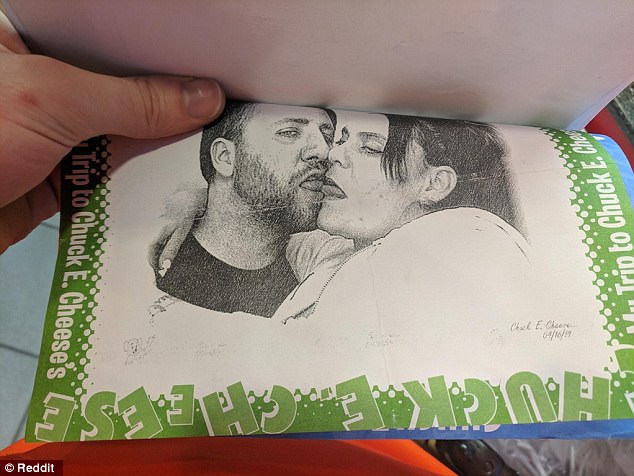 What are mommy and daddy doing!?! Two people got into a photobooth at a Chuck E. Cheese children’s restaurant and posed for this slobbery shot, then left it in the machine 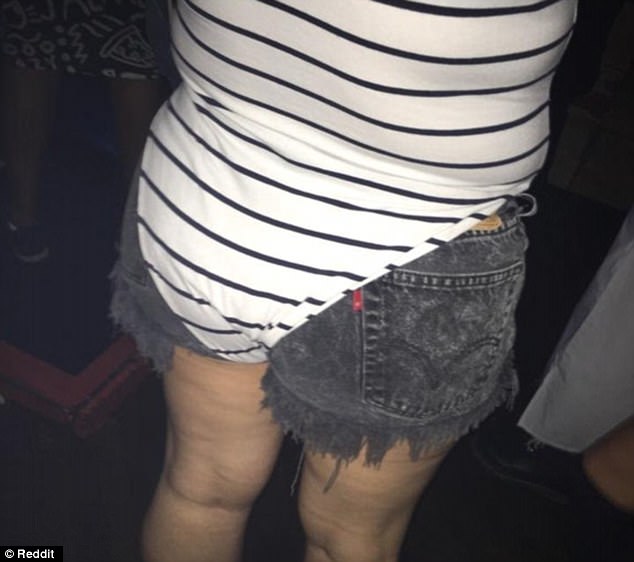 It goes INSIDE, girl! As the Redditor who posted this pointed out, this is decidedly not how a bodysuit is meant to be worn 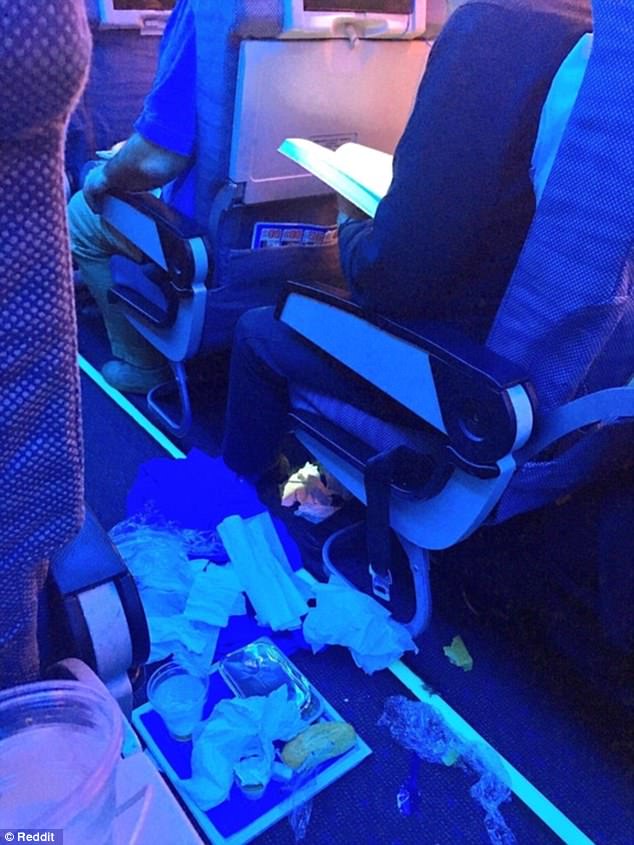 Ew: One Redditor was blown away by how trashy — literally — a fellow plane passenger was, literally dumping his garbage into the middle of the aisle 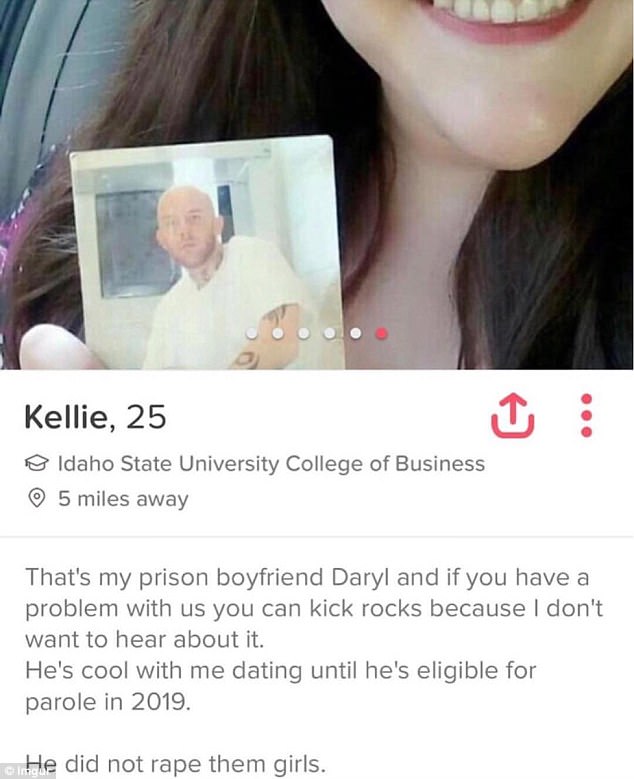 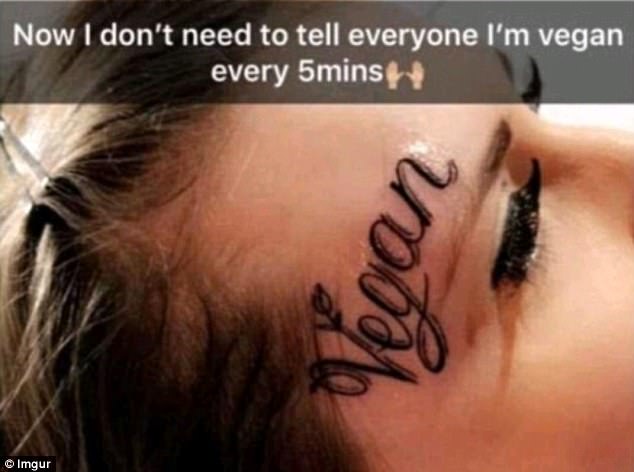 At least she’s honest! This woman noted the convenience of broadcasting her vegan status (in what very well might be a joke parodying preachy vegans) 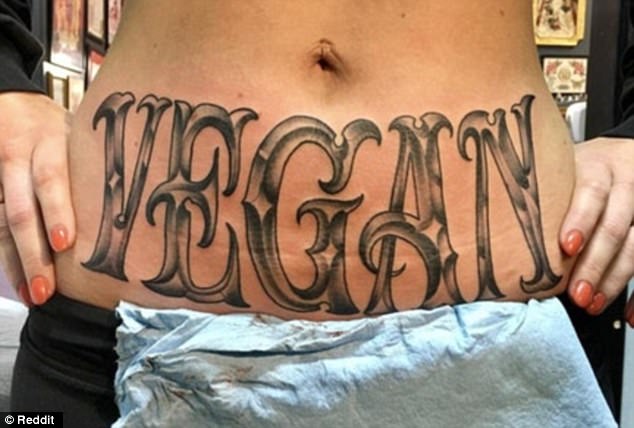 Sexy: This vegan tattoo, though, is real, and was posted by the tattoo artist 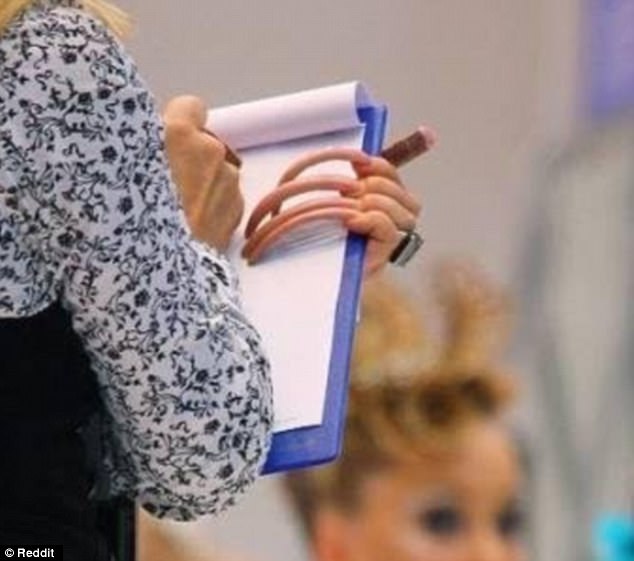 Talons: Some people find child beauty pageants entirely trashy — but this judge’s fingernails take it too a whole new level 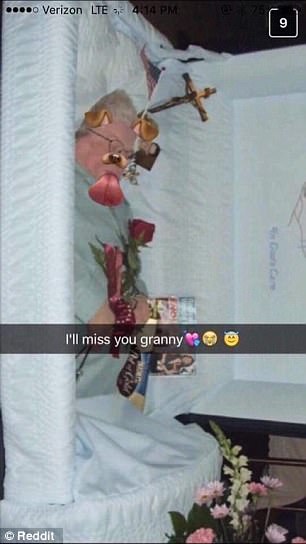 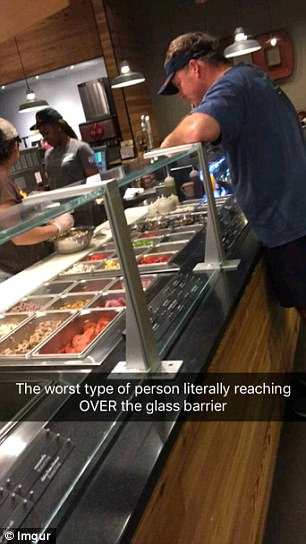 RIP: A trashy teen used the doggy Snapchat filter at her grandma’s open-casket funeral (left) while one man got on everyone’s nerves by reaching over a food barrier (right) 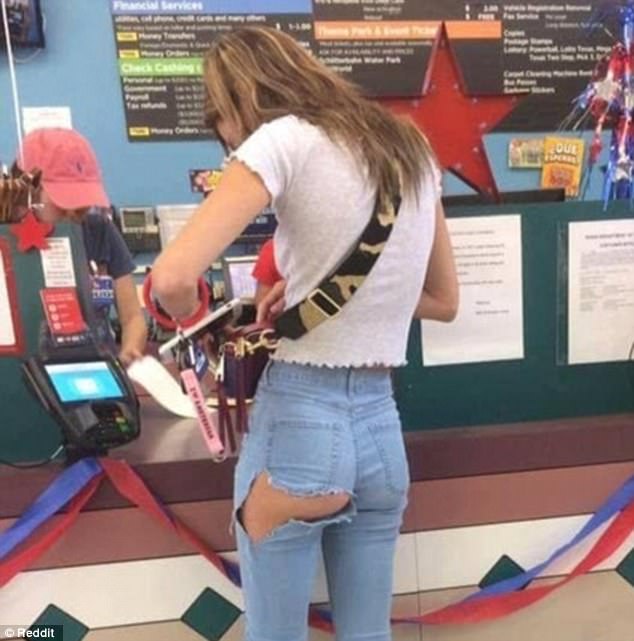 Why wear pants at all? Distressed is one thing, but these jeans are ready for the bin 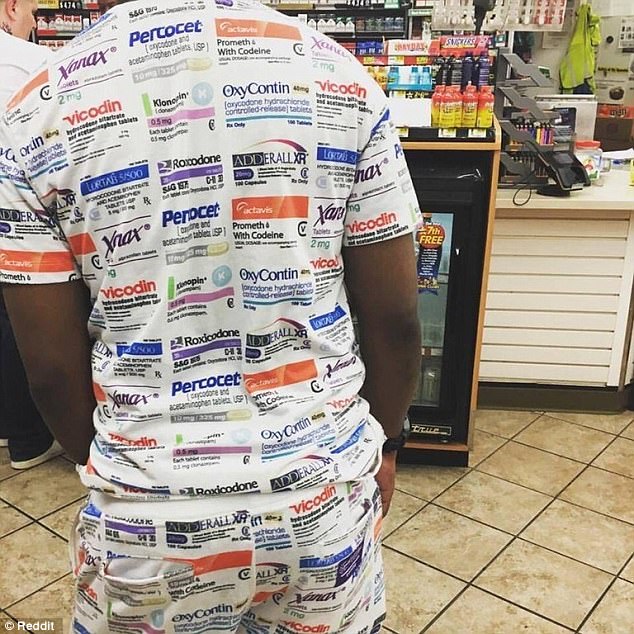 Fashion highs… and lows! The only thing better than this man’s T-shirt (printed with brand names for drugs like Percoset and Oxy-Contin)? His matching shorts! 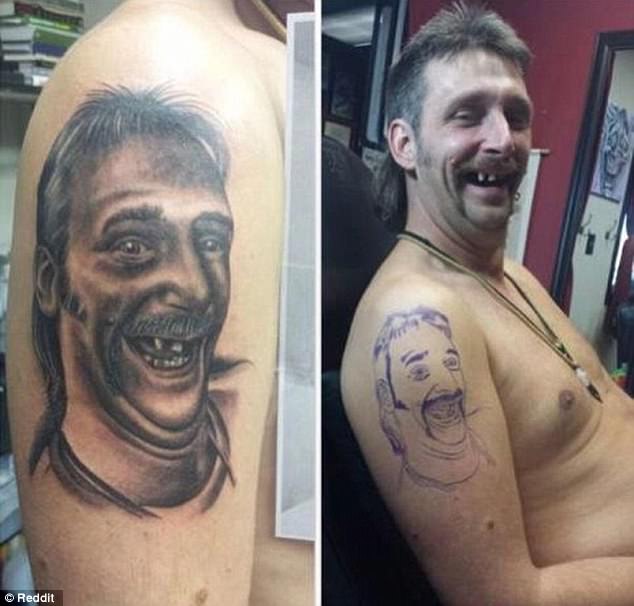 Epic? This man got a tattoo of his own toothless grin and mullet 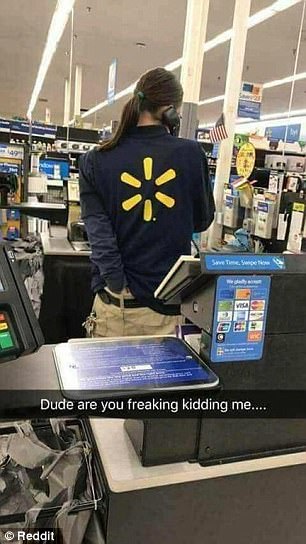 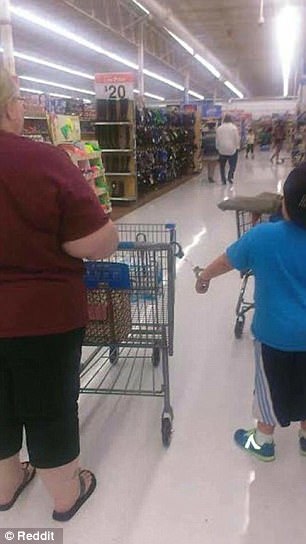 Only at Walmart: A shopper was horrified to catch a cashier’s hand down the back of his pants (left) while another was taken aback by a mother who handcuffed her son to her cart (right) 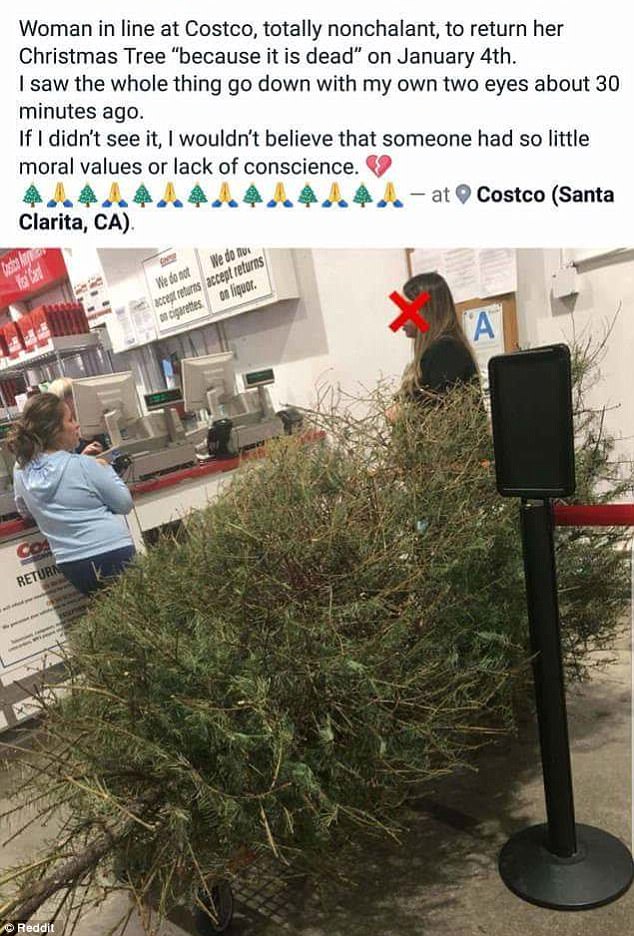 The spirit of the season! One woman actually tried to ‘return’ her old Christmas tree a week after the holiday 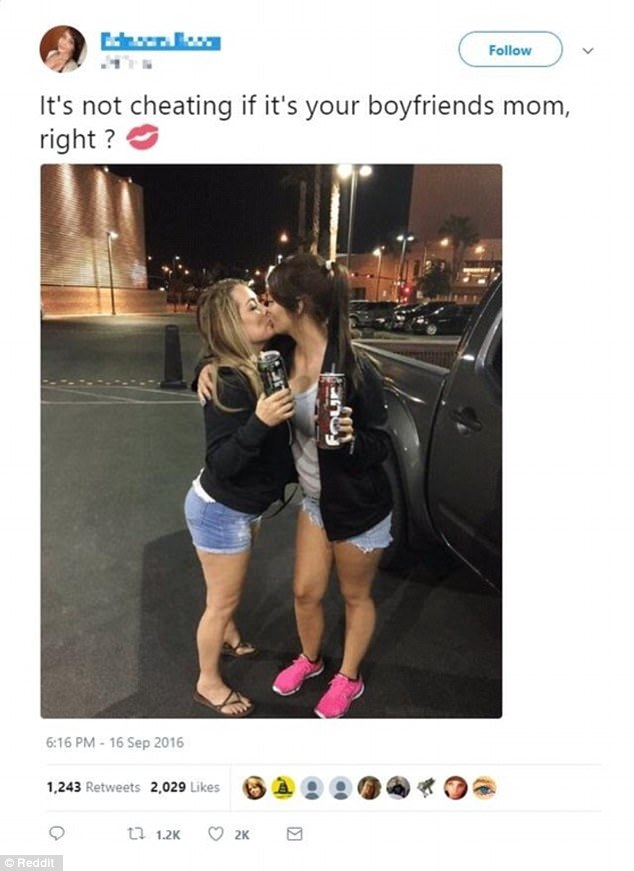 Oh please no: There is an ungodly amount of ‘wrong’ in this photo 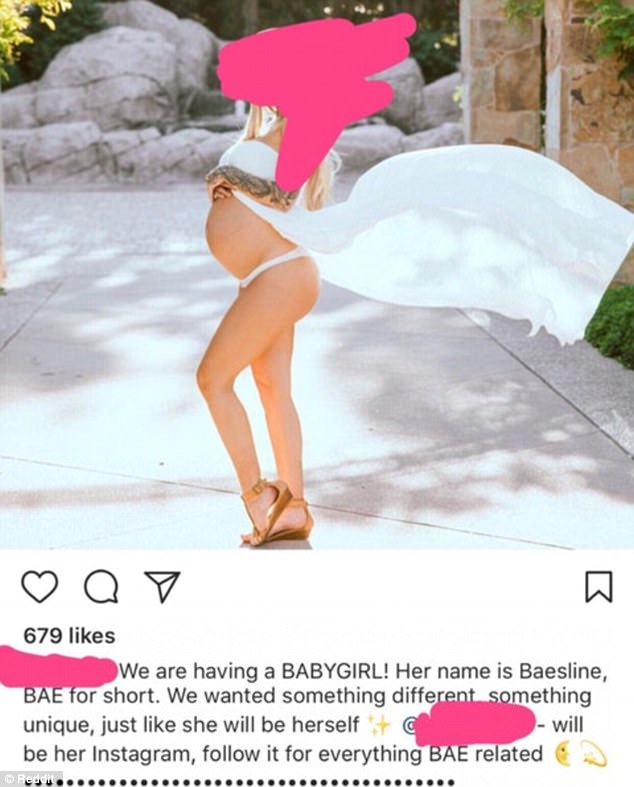 Once you get past the maternity photo, you get to the real treat here: This mom is naming her baby Baesline, with ‘Bae’ as a nickname 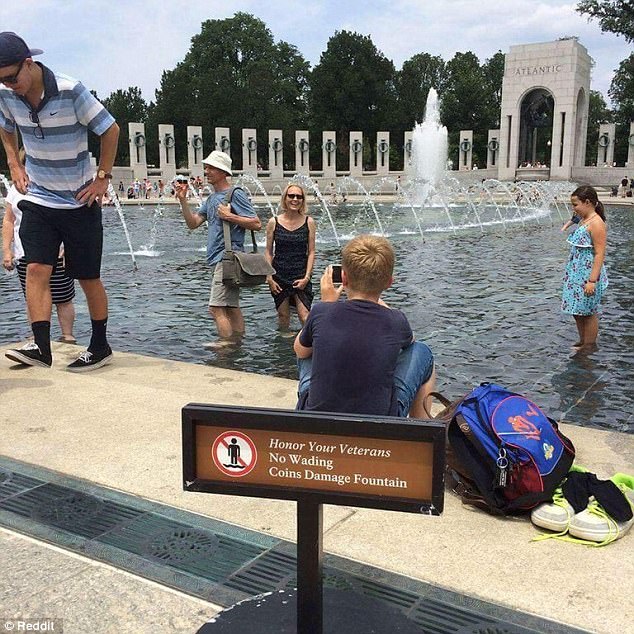 Rude: A number of adults blatantly ignored this sign about respecting veterans 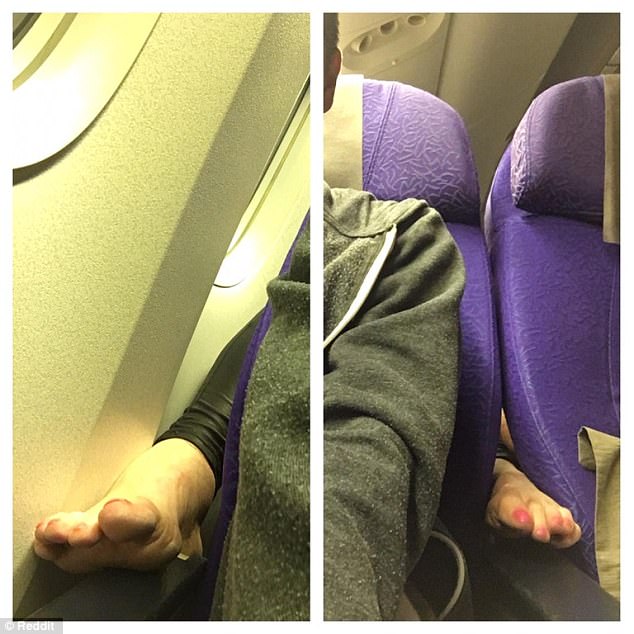 Have some respect! An alarming number of people treat airplanes like their living rooms 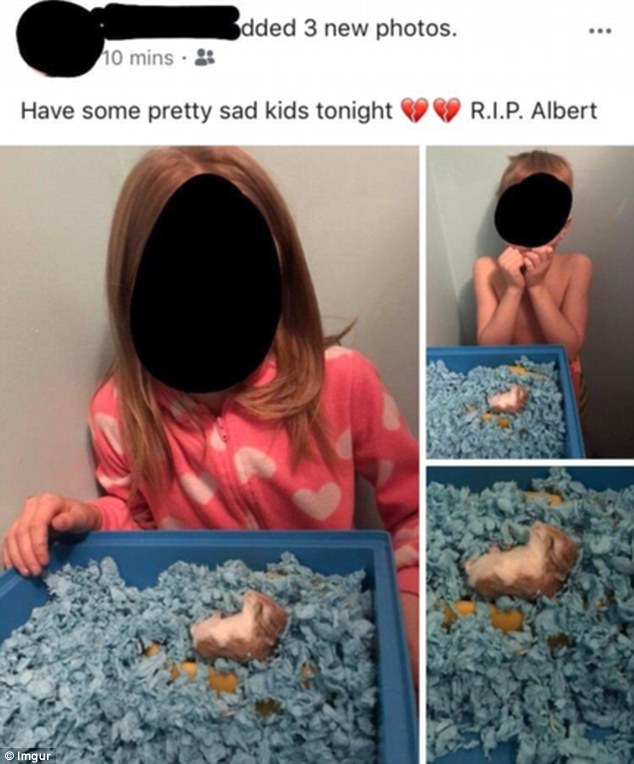 Real nice: Instead of comforting her kids after the loss of their pet, this mom posted pictures of them grieving over the dead animal on Facebook 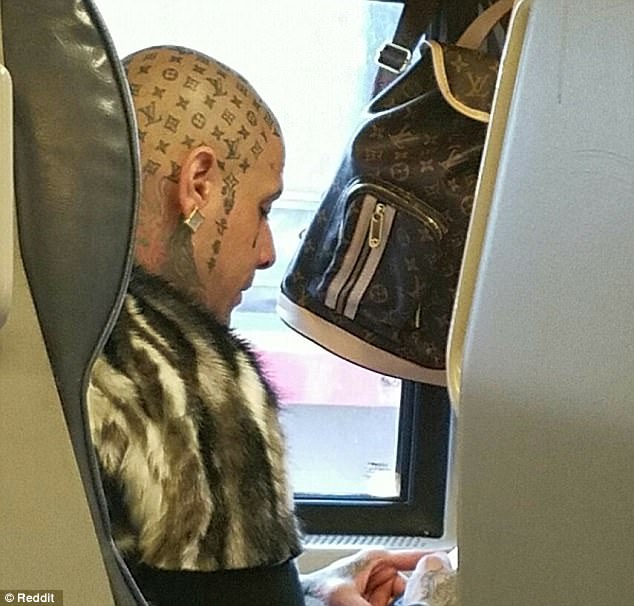 Time to grow out his hair? This Louis Vuitton superfan had the designer’s logo tattooed all over his head 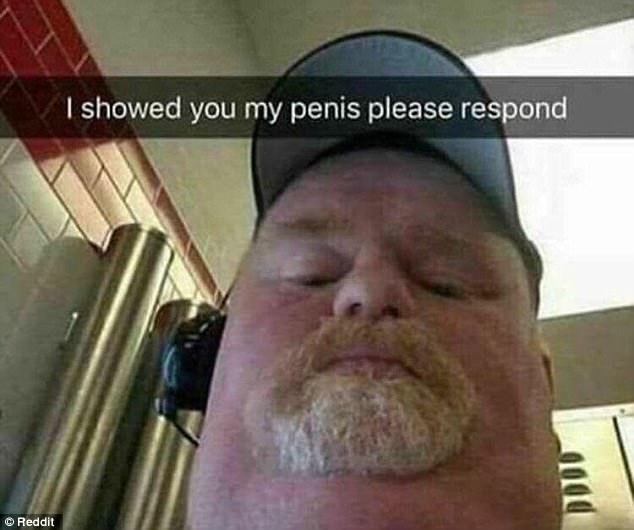 Fries with that? What’s even more horrifying than this man demanding a response to his unsolicited penis photo is that he is doing so while working the Drive-Thru window 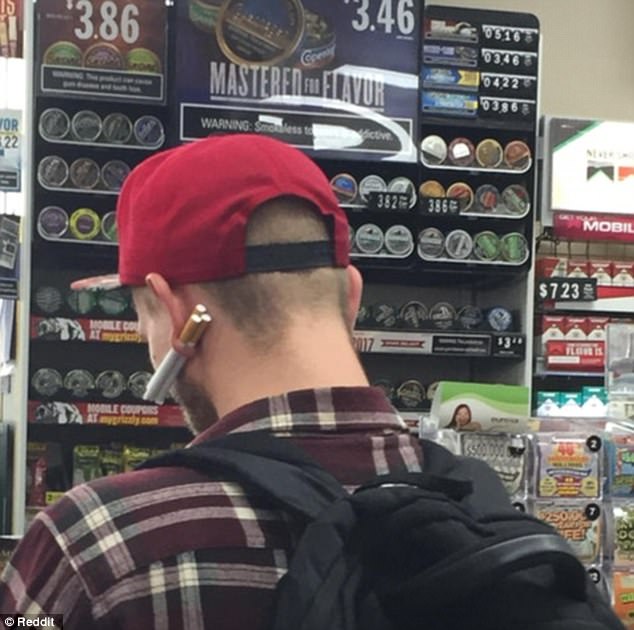 Can’t unsee: After stretching out a hole in his ear with an ear gauge, this man used it as a handy place to store his cigarettes. Three of them 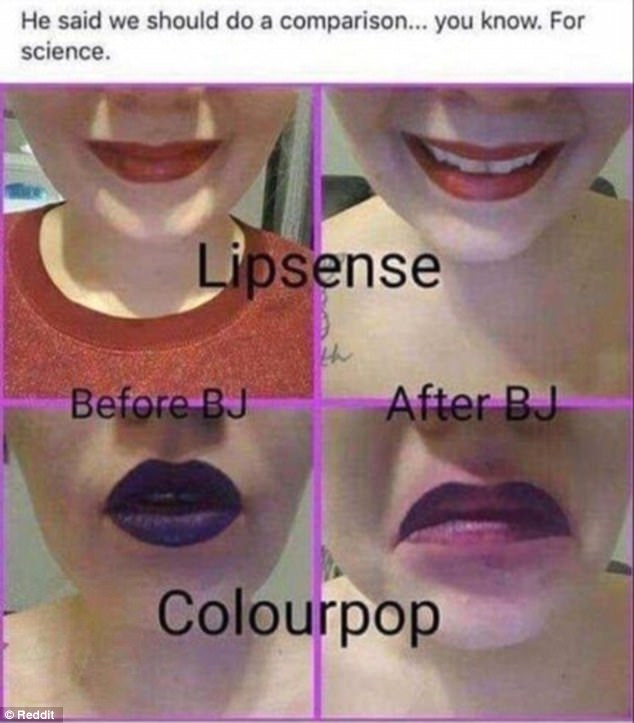 Not so smuge-proof: Not only did this woman test how well her lipstick stayed put through oral sex, but she actually posted the results on social media

Nuke those bills! While it’s certainly trashy to use an old microwave as a mailbox, it’s also kind of… clever?