Redskins will be called the ‘Washington Football Team’ for 2020 season

BREAKING NEWS: The Redskins will be called ‘Washington Football Team’ for the 2020 season and will officially rebrand later – after ditching their old name in racism row

The Washington Redskins will be called the Washington Football Team for the 2020 season and will decide on a permanent name-change later, after ditching their old in name in row over racism.

In an announcement on Thursday, the team said: ‘We’re retiring our old name – and building a new kind of team. For the upcoming season, we’re calling ourselves The Washington Football Team.’

The new logo is the word Washington with the ‘Football Team, EST 1932’ beneath it. It replaces the old logo, which was of an Native American chief.

Sponsors started calling for a name change earlier this year as the Black Lives Matter movement swept America, wiping out anything that was deemed historically racist.

The Redskins name, critics argued, was steeped in racism against Native Americans, and was no longer tolerable in the 2020 climate of equality.

The team vowed to change and took suggestions such as the Red Hawks, Red Wolves and the Washington Warriors.

This is the team’s new logo, unveiled on Thursday as they launched their rebranding 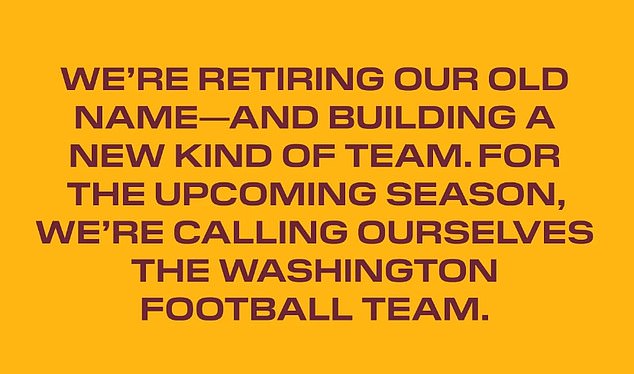 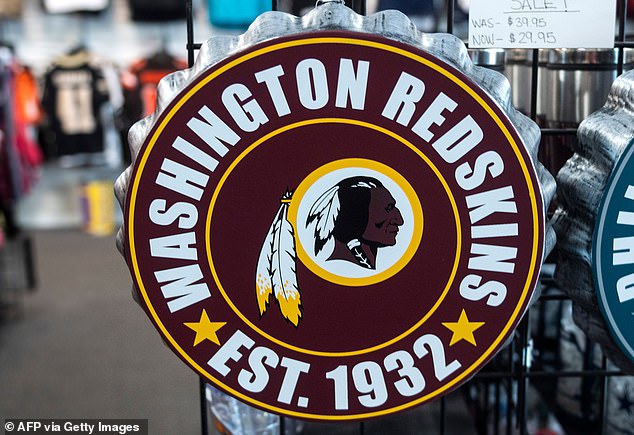 This is the team’s old name and logo. As the Black Lives Matter movement swept America earlier this year, so too grew calls to do away with racially insensitive terminology that applied to Native Americans. It resulted in sponsors deciding the Redskins’ name and logo were racist