Sports brand Reebok has been forced to pull an advert in Russia, following complaints that its ‘inspirational message’ is inappropriate.

The Russian version of the brand’s ‘Be More Human’ campaign, which aims to celebrate strong women, is accompanied by a hashtag which translates to ‘not fit for frames’.

It features, among others, Russian influencer Zalina Marshenkulova, who takes the opportunity to encourage women to ‘switch seats from a man’s approval to a man’s face’, according to local media.

‘Offensive’: This advert, carrying the slogan: ‘Switch seats from a man’s approval to a man’s face’ has been removed by Reebok following complaints

The advert sparked outrage and was criticised for being lewd and inappropriate, and shortly after the poster had been published on Instagram, it was pulled and the offending slogan removed.

Reebok Russia then apologised, saying their intention had been to ‘give the floor to girls who have something to say and who are not shy about being themselves.’

As these women’s views are ‘somewhat at odds with the existing norms when it comes to the role of women in society’, their words can be misinterpreted, the company wrote on Instagram.

‘Unfortunately,’ the company added, ‘after the publication of some pictures, it became clear that part of the content can not be published on behalf of the brand,’ claiming it would breach Instagram’s ‘age policy’.

However, Reebok added, all the posters, including the one with the offending slogan, can be found on the women’s own social media accounts. 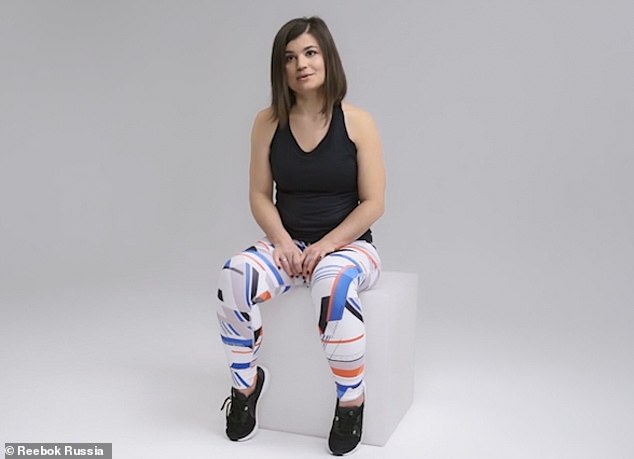 The ad campaign features several young Russian women, including social media influencer Zalina Marshenkulova, and is meant to encourage others not to worry about social norms and traditional definitions of femininity

After the advert was modified, the man behind the campaign said he was so ashamed of the debacle that he is planning to resign.

Campaign director Alexander Golofast said the entire advert, including all the posters had been approved by Reebok executives.

‘The brand took a cool photo shoot, made good video content, did post production for a long time, put logos on it, and as soon as it got some negative comments, they took it down, ,’ he told a Russian TV channel according to Moscow Times.

‘The brand has the power to do that [remove an advert], but I’m just ashamed that I now look ridiculous.’