Jacob Rees-Mogg today insisted he ‘deeply regrets’ attending a dinner party with a far-right activist after being warned of his racist views.

The Tory darling said he found the views of Gregory Lauder-Frost ‘disgusting’ and would never have gone had he been fully aware of them.

Mr Rees-Mogg was pictured sitting next to Lauder-Frost at the dinner five years ago after accepting an invite to the Traditional Britain Group.

Confronted about the event today, Mr Rees-Mogg admitted he had been tipped off about Lauder-Frost’s views but claimed Tory HQ had failed to corroborate the warning.

A Daily Mirror expose revealed Lauder-Frost spouted bile about justice campaigner Baroness Lawrence , who he called a ‘n*****’, and broadcaster Vanessa Feltz , who he dismissed as a ‘fat Jewish s**g’.

He also talked of deporting non-whites to their ‘natural homelands’ as he was covertly taped by anti-racism group HOPE not hate who are making a film about the rise of the alt-right.

Challenged on the dinner on Sky News today, Mr Rees-Mogg said it was ‘unquestionably a mistake’ to go to the event.

He said: ‘As it happened I asked central office before going to that dinner and at that point they knew nothing about the organisation.

‘I made enquiries, I heard nothing about them.

‘I deeply regret going to that dinner. It was a mistake. This fellow’s views are really disgusting and I have no association with them.

‘I would not have attended that dinner had I known, and regrettably when I asked central office, and this is many years ago, they didn’t give me the information.’ 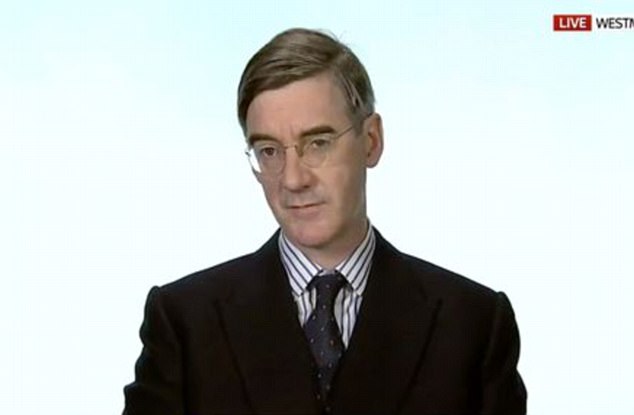 Confronted about the event on Sky News today (pictured), Mr Rees-Mogg admitted he had been tipped off about Lauder-Frost’s views but claimed Tory HQ had failed to corroborate the warning

He added: ‘Somebody rang me up shortly before the event to say these people had unpleasant views and therefore I made enquiries to see what evidence there was for that.

‘Regrettably I didn’t find any evidence, otherwise I would have of course pulled out.

‘I regret it. It was unquestionably a mistake to go to this dinner.

‘The views are not my views and I do not think his views have any place in a modern democracy. I think they’re really revolting views, I can’t be critical enough of them.

‘And I made a mistake in going to that dinner. I make no bones about it.’

Lauder-Frost is the former political secretary of the Monday Club, which called for the repatriation of 50,000 immigrants a year and the repeal of all race relations legislation.

The Club was formerly endorsed by the Conservative Party but it was disavowed in 2001.