Enjoying your starring role, Jacob? Rees-Mogg is seen clutching Jeeves and Wooster book that paints the toff as ‘a secret agent battling to save the nation from treason as storm clouds gather over Europe’ after his hush-hush visit to see the Queen

Jacob Rees-Mogg may have been dubbed the Honourable Member for the Eighteenth Century but today he hinted he sees himself in a more swashbuckling role: as Bertie Wooster, Secret Agent.

The Leader of the House was photographed conspicuously clutching a novel at the airport today after his successful meeting with the Queen at Balmoral to secure her assent for the prorogation of Parliament.

He had managed to fly under the radar from London to Scotland, leaving Remainers and the press clueless for several hours that the Prime Minister’s request to suspend Parliament had already been submitted in person – and approved.

The book in the North East Somerset MP’s right hand, visible for the waiting photographers at Aberdeen International, was Jeeves and the King of Clubs, a Wodehouse homage penned last year in by journalist and author Ben Schott.

The nove”s dust jacket sets the scene: ‘Storm clouds loom over Europe. Treason is afoot in the highest social circles. The very security of the nation is in peril.

‘Jeeves, it transpires, has long been an agent of British Intelligence, but now His Majesty’s Government must turn to the one man who can help . . . Bertie Wooster.’

Mr Rees-Mogg managed to fly to Scotland without opponents or the press noticing, but was photographed at the airport following his meeting at Balmoral 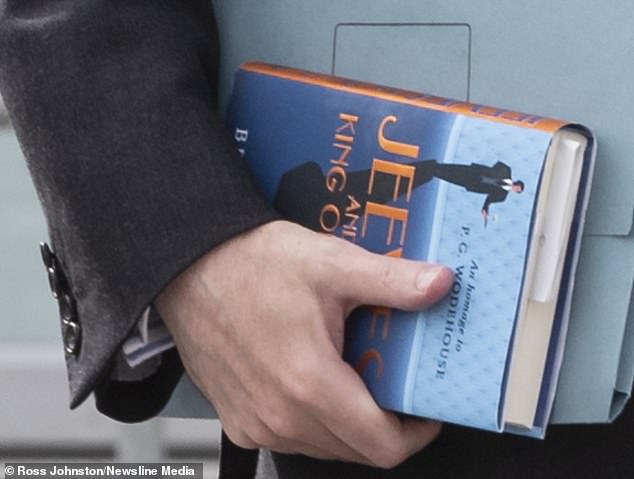 A close look at today’s photographs reveals the Leader of the House was clutching ‘Jeeves and the King of Clubs’ by Ben Schott, a 2018 homage to Wodehouse’s beloved series

In the book, reviewed by the Mail’s Quentin Letts as ‘remarkably good’ and ‘eerily Wodehousian’, Schott leads Jeeves and Wooster on ‘an uproarious adventure of espionage through the secret corridors of Whitehall, the sunlit lawns of Brinkley Court, and the private clubs of St James’s.’

Amid a cast of ‘disreputable politicians and gambling bankers, slushy debs and Cockney cabbies’, the aristocrat and his valet seek to foil treachery while betting on horse races, wiggling out of an awkward engagement and cooking up ‘a new variety of condiment’.

It was reviewed by Sophie Ratcliffe in the Times Literary Supplement as ‘a joyous and thoughtful tribute’, and perhaps more pertinently for today’s flying visit to Scotland: ‘P.G. for the Brexit era.’

Yesterday MPs and party leaders opposed to a No Deal Brexit spent the day in talks and announced a combined plan to seek to pass legislation to block No Deal. 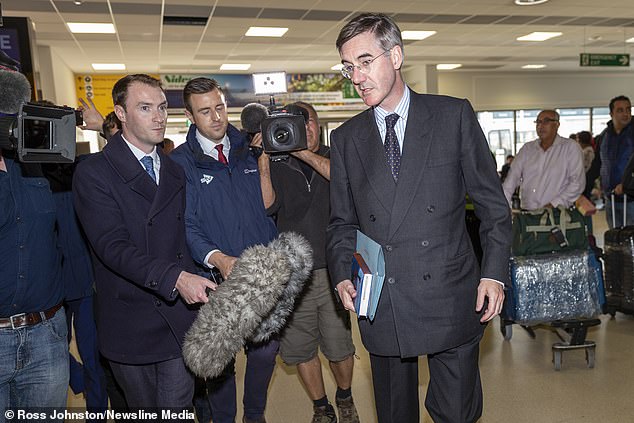 In doing so they turned their backs on mooted plans to move a vote of no confidence in Mr Johnson’s government, and to install Jeremy Corbyn as caretaker PM.

This morning in a dramatic seizure of the initiative Mr Johnson dispatched Mr Rees-Mogg to Scotland along with Lords Leader Baroness Natalie Evans to meet the Queen and request suspending proceedings for 32 days between September 12 and October 14.

Mr Johnson outlined his proposal to the monarch in a phone call this morning while Jacob Rees-Mogg, the Commons Leader, flew to Balmoral Castle in Scotland to present it to her in person.

The Prime Minister will suspend Parliament by September 12 at the latest after MPs return to work on Tuesday.

The Queen acts on the advice of her ministers and there was never any question of her blocking the request.

Prorogation will take place at some point in the week beginning September 9 in a move which will dramatically reduce the amount of time available to Europhile MPs who want to pass a new law which would force Mr Johnson to ask the EU to delay Brexit if the UK is on course for a No Deal split on Halloween.