Refugee crisis as number of lone children in UK soars

The number of lone child refugees cared for by English councils has more than doubled in four years because of the spiralling migration crisis.

The total is still rising despite the closure of the Calais Jungle camp last year and the arrival of more than 300 child migrants in Britain.

Council chiefs have warned they are struggling to cope because of the massive influx of young refugees without parents or carers who have travelled across the Channel to the UK.

If a child claims asylum in the UK they become the legal responsibility of the local authority in which they are discovered.

One in 16 children being looked after by Town Halls are now unaccompanied asylum seekers, compared to 1 in 33 in 2013 – almost double the rate.

A report from the Department for Education (DfE) said: ‘After a large rise in numbers last year, the number of looked after children who were unaccompanied asylum-seeking children continues to increase in 2017.’

The vast majority – 92 per cent – of those being supported by councils were boys. But the number of lone girls had soared by 19 per cent in the last year, compared to just 5 per cent for boys.

There has been an increase in the numbers of unaccompanied asylum-seeking children aged 16 years and over, up 9 per cent to 3,540. But the the number aged under 16 years has decreased slightly by 3 per cent to 1,020.

In total, more than three quarters – 78 per cent – of youngsters seeking sanctuary were at least 16. 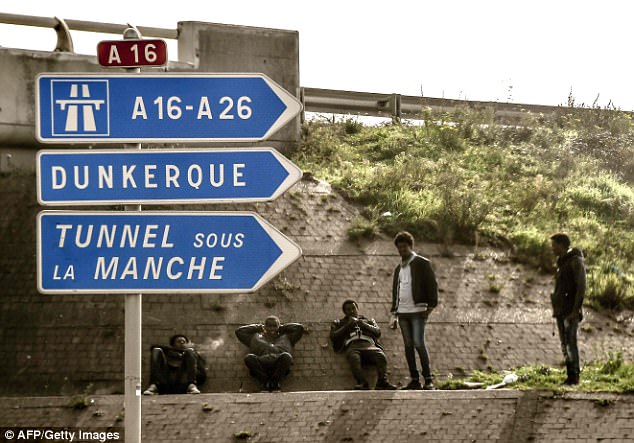 The rise in numbers came despite the closure of the ‘jungle’ camp in Calais, as refugees continued to find ways to cross the Channel (file image)

The DfE paper noted ‘significant variation’ in the number of unaccompanied asylum-seeking children across the country, with many concentrated in areas where they first entered.

Kent and Croydon had the highest numbers in their care, with 485 and 390 respectively, although these had reduced compared with the previous year after a national transfer scheme was introduced.

Council chiefs have warned the arrivals has significant implications for the taxpayer because councils are responsible for all costs associated with child asylum seekers until they are 25.

It includes schooling, foster care or children’s homes, through to university fees and housing costs. Daily rates paid to councils went up from £95 to £114 for under 16s and from £71 to £91 for 16 and 17-year-olds.

Costs to local authorities for every 100 unaccompanied children are estimated at £6.75million a year with the Home Office providing £3.35million – leaving a shortfall of £3.4million, a report found last year.

A row flared last year amid mounting concern that adult refugees were lying about their ages to gain entry to Britain.

Calls for the Home Office to carry out dental checks grew after suspiciously mature-looking child migrants were among those who arrived to be reunited with relatives as part of a Home Office programme.