A registered sex offender who tried to groom an eight-year-old girl online while her mother was in the bath has walked free from court after being found mentally unfit – for the second time in the space of a year.

Autistic Thomas Hagger, 28, approached the child through her mother’s account on the live streaming app Bigo after she asked to borrow her phone to watch YouTube videos.

He asked for photos of her wearing ‘Pocahontas knickers’ and tried to lure her onto Snapchat before sending a picture of his penis.

The girl’s horrified mother discovered the messages then posed as her child to carry on the chat and gather more evidence – which she passed on to a team of self-styled paedophile hunters called Internet Interceptors. 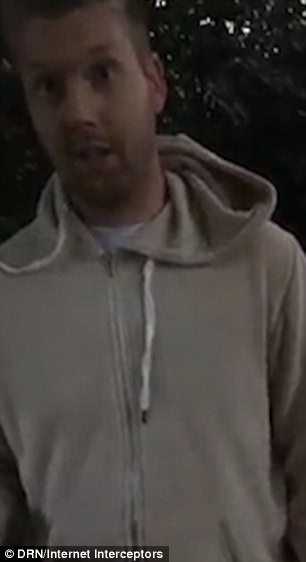 He asked for photos of her wearing ‘Pocahontas knickers’ and tried to lure her onto Snapchat before sending a picture of his penis. He is pictured as he is being confronted by members of Internet Interceptors 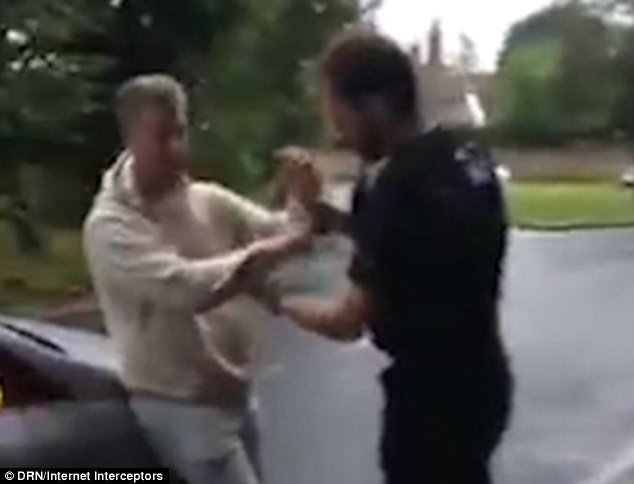 Hagger was arrested at the scene and charged with attempting to engage in sexual communication with a child and breaching a sexual harm prevention order, but he was later deemed unfit to plead

They cornered the suspect near his home in Epping, Essex, on September 15 last year and placed him under citizen’s arrest, while dialling 999.

During the confrontation, the group claimed they reported him to police that morning but were told officers were ‘too busy’ to come and arrest him and would not be able to respond for up to three days – despite Hagger having been put on the sex offenders register just three months earlier for trying to groom a 12-year-old girl.

The clash turned ugly when Hagger’s irate brother pulled up in a car and leapt to his defence, screaming at the paedophile hunters to leave him alone.

Hagger was arrested at the scene and charged with attempting to engage in sexual communication with a child and breaching a sexual harm prevention order, but he was later deemed unfit to plead.

A jury at Chelmsford Crown Court found Hagger did commit the offences but the verdict was classed as a finding of fact rather than a finding of guilt due to his mental health difficulties.

He was handed a five-year sexual harm prevention order and a two-year supervision order on March 16. A restraining order was also imposed, preventing Hagger from having any contact with the victim.

Dramatic footage of his arrest – filmed live on Facebook – shows Hagger being approached by two women while out walking his dog. 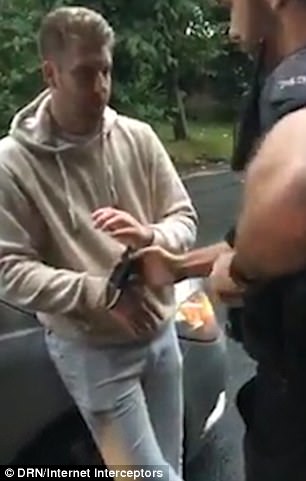 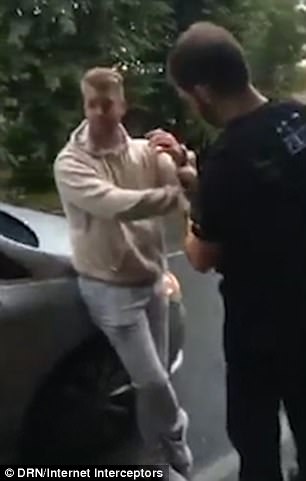 When challenged, he claims he can barely remember speaking to the eight-year-old because he was ‘tired’ at the time.

A woman – named as Julie – shows him the explicit picture he sent and asks: ‘Do you think it’s acceptable to send that to what you believed was a child?’

He says ‘it’s not’ and insists: ‘I don’t like paedophiles at all.’

Julie replies: ‘But you are one, Thomas. You’ve asked for an eight-year-old in a pair of Pocahontas knickers and then you’ve sent an eight-year-old a penis picture. You need to be stopped. You can’t keep playing the mental health card.’

Hagger, who also claimed to suffer with dyspraxia – a brain disorder which affects motor function – admits to sending the picture and says he is ‘distraught’ by his actions.

Julie says: ‘You messed up big time because you spoke to the wrong mother. She, luckily enough, came to us.

‘I gave the police all of your information this morning. They’re not coming to get you until Sunday because they’re too busy.’

Hagger’s brother then turns up in a car and tries to grab the camera, shouting: ‘He’s autistic. Let the Old Bill do it.’

The suspect tries to get in his brother’s car but the women block him.

Julie then jumps in the front passenger seat to stop them from leaving and Hagger’s brother screams: ‘Get out of my f****** car.’ 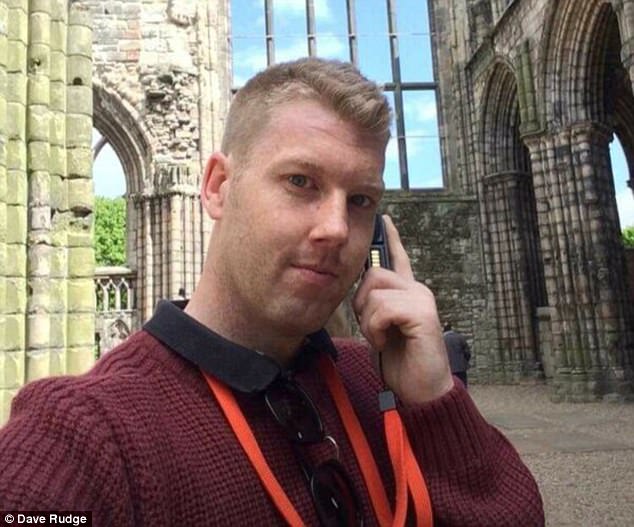 Autistic Thomas Hagger, 28, approached the child through her mother’s account on the live streaming app Bigo after she asked to borrow her phone to watch YouTube videos

Police arrive a short while later and break up the slanging match before taking the suspect away in handcuffs.

The girl’s mother – who cannot be identified – said after the case: ‘I was in the bath no longer than 30 minutes.

‘I put my kids to bed and went on my phone to find messages from Thomas Hagger to my daughter.

‘He was asking her to come off the app and add him on Snapchat, after she told him she is only eight.

‘Four messages between him and my daughter were exchanged. She hadn’t read his last message where he asked if she had a bath or a shower.

‘I pretended to talk to him as her, he was asking if she could FaceTime him and get naughty, what her favourite underwear was and how he’d like to see it.

‘Within 20 minutes he had told her she was beautiful and sent a picture of his d***.

‘In the morning I contacted Internet Interceptors, they were amazing and tracked him down.

‘The police were going to leave him until Sunday – three more days of him talking to kids on the internet.’

Chelmsford Crown Court heard Hagger sent sexual messages to a 12-year-old girl on Facebook and was arrested after her stepfather called the police.

When officers searched Hagger’s computers they found the terms ‘pre-teen movies’, ‘teen chat’ and ‘chat sites for kids’ had been entered and there were 98 indecent images of children – eight from Category A.

He was judged mentally unfit to stand trial but a jury found he committed all the offences based on the evidence.