Nostrils flared and teeth bared as if ready to bite, two stallions rear up on their hind legs – squaring up for a fight.

It might look like a scene from the Wild West, but in fact the majestic animals were sparring in the heart of the English countryside.

The wild koniks, close relatives of the prehistoric tarpan that roamed Europe in the Bronze Age, were photographed in a duel on the wetlands of Wicken Fen in Cambridgeshire.

These dramatic photographs also show them ‘boxing’ with their forelegs in a rare display. 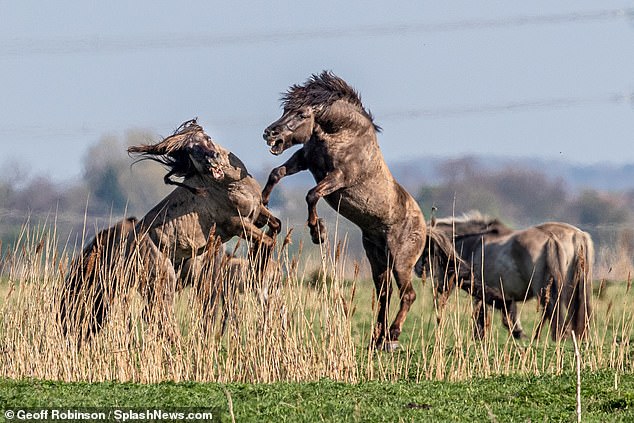 All stallions could fight like this during the breeding season, but owners tend to keep them apart – so such behaviour in domestic horses is seldom seen.

And while it may look like a vicious equestrian battle, wardens at the National Trust nature reserve say the stallions are likely indulging in some macho posturing or enjoying some rough and tumble play.

On other occasions, this behaviour could be seen in a youngster challenging a dominant stallion over his mares. 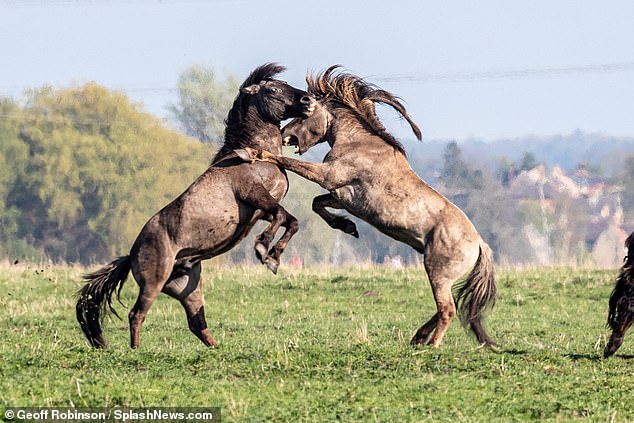 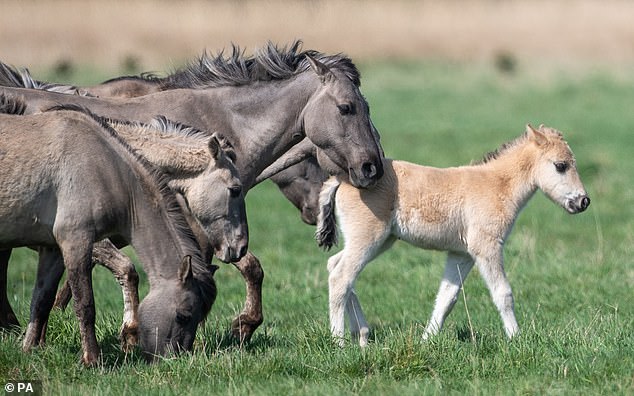 Konik ponies, which share many characteristics of the now-extinct Tarpan, were imported from Holland to help manage the nature reserve in Cambridgeshire

Wild horses vanished from Britain 4,000 years ago, but the first six konik ponies were introduced to the reserve in 2001 – and the herd is now more than 100 strong.

Our pictures also show one of the latest konik arrivals born at Wicken Fen during the springtime foaling season.

The primitive Polish breed are rarely taller than 13 hands high (a little over 4ft to the top of the shoulders) and have a large head, broad body, strong legs and a blond and dark mane.

The ponies are a great boost for the ecology of the nature reserve, which is one of the oldest in Britain.

They help keep the land open by grazing on weeds, reeds and grass which gives other plants, as well as birds and insects, the chance to settle in an area.

The National Trust say koniks are ideally suited to wetland environments and their ‘hardiness’ means they are ‘more than capable of withstanding the rigours of life on the fen’.

A spokesman said: ‘Grazing animals are essential to the development of vegetation in new areas of the nature reserve.

‘The animals help keep the landscape open and help wetland and grassland plants to become established.’

When not indulging in macho antics, koniks are said to ‘have a stolid nature and even temperament, even when left unhandled’.