Relationship red flags not to ignore during divorce season

The festive season brings many things and not all of them come wrapped in shiny paper.

Alongside the gifts and the mince pies, there’s the very real threat of a crack in your relationship appearing too, as over-indulgence, opportunities for bad behaviour and difficult family members heap pressure on couples.

Denise Knowles, a Relate counsellor with 25 years of experience, says she frequently sees couples in January saying ‘We never want to have another Christmas like that’

She says: ‘We see couples who say ‘we never thought we’d find ourselves here” or “we never want to have another Christmas like that again”‘.

Knowles says pressure is often the key to festive relationship breakdowns:  ‘People often put unrealistic expectations on each other. They want the perfect Christmas, the chocolate box idyll.

‘I hate to lay the blame at the door of advertising, but the constant message about having the perfect Christmas does make people want it all.

There’s a human desire to have a good time together and it can create a tinderbox at Christmas.’ 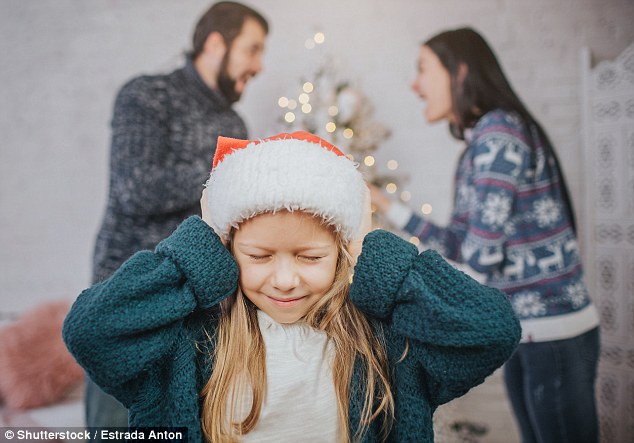 Young children, overwrought by too many presents, can add to the tension between parents

And it doesn’t matter how long you’ve been together with long-term relationships just as vulnerable as new ones.

Says Knowles: ‘Newlyweds often feel a different sort of pressure to other couples.

‘It depends on where and how they’re spending Christmas but they may have two lots of in-laws to try and impress. They may be hosting for the first time and want to prove that they can stand on their own two feet.

‘Older couples may feel that they have everyone descending on them including their own children and grandchildren. And grandkids are often obsessed with screens and may not engage in the way grandparents had hoped, leading to disappointment and tension.’

If you’re fretting about marital tension this yuletide, feel reassured that many couples do come out the other side.

Says Knowles: ‘Communication is key and there needs to be a willingness to work things through but you should always be optimistic that marriages can be saved

‘It’s all about expectation before the event. If you know what to expect and who’s doing what you’re less likely to scream at your partner when everyone goes home.’

So, how do you ensure that come January 1st, you don’t wake up with a separation on your hands?

Try and compromise on nights out. Everyone wants to let their hair down and inhibitions lower but no-one wants to have to face a colleague the next morning having done something silly.

If you feel jealous about a partner getting dressed up and going out, then try and reach a compromise with them where you agree they’ll try and get home at a certain time. Or if they’re going away, you’ll Skype at a certain time.

ASSIGN EACH OTHER ROLES BEFORE CHRISTMAS

Assign roles. Emotional intelligence can be lacking The vast majority of women end up being the main host, which puts on lots of pressure. Resentments develop if you’re doing all the work and your partner is on their umpteenth sherry.Before December 25th, talk about who does what.

Discuss how you’re going to deal with a tricky relative together well ahead of time. It needs to be a collaborative effort to ensure the person is ‘managed’.

And don’t be afraid to ask other family members to help, by bringing something that makes your day easier, even if it’s just a £10 box of crackers.

Don’t be afraid to spend some time away from the party. Couples don’t ordinarily spend this much time together and problems that can be avoided through the year often rear their head. Don’t be afraid to go and have a cup of tea by yourself, or take a walk alone.

Financial pressure at Christmas can be huge. Be careful about your budget and agree together what you can afford for family members. People often think they can pay things off in January and they overspend on everything from food to gifts – which leads to misery when you can’t afford things later on.

Children can be addicted to the latest toys and easily become overwrought, moving from one toy to another at Christmastime, adding additional pressure for parents.

Be realistic with your budget – a cardboard box is often played with more that the latest must-have toy. And be sensible too, don’t roll in drunk in front of them on Christmas Eve.