In what is surely the most adorable story of the day, relationship experts have found that older couples subconsciously sync up heart rates when close together.

The team found that, when in close proximity, one member of each couple would influence the other’s heart rate, and vice versa, in a complicated dance.

However, the findings were unable to reveal any clear patterns underlying the shifts.

In what is surely the most adorable story of the day, relationship experts have found that older couples subconsciously synchronise their heart rates when close together (stock image)

‘Our first step was to see if heart rate and proximity are correlated over time, explained Professor Ogolsky. Pictured: fitted time series plots of one couple’s distance apart (purple), the wife’s heart rate (green) and the husband’s heart rate (red). Note that the superficial lack of synchronisation is a product of the changes in distance and the lag time between the pair

It’s not just long-term couples who  unknowingly synchronise their heart rates — people listening to the same stories end up in sync as well.

This is the conclusion of a study from the Paris Brain Institute that was published back in September.

The finding builds on previous studies that found that people often sync up bodily functions like heartbeats or breathing when undergoing a shared experience.

The finding could help to develop a new and easy-to-administer hospital test to determine the level of a given patient’s consciousness.

‘But as couples age and have been together for a long time, they laugh when we ask them how satisfied or how committed they are.

‘When they have been married for 30 or 40 years, they feel that indicates commitment in itself.

‘We were looking for more objective ways to measure relationship dynamics, and we know that being around other people has psychological benefits. So, physical proximity seemed liked a strong candidate.’

Of course, being physically close to someone isn’t always a good thing, with the context — for example of a loving interaction vs a conflict — being important. Similarly, changes in heart rate can also be positive of negative.

‘We’re not focusing on cause and effect, but on co-regulation, which happens when heart rates move in a synchronous pattern,’ explained Professor Ogolsky.

‘That is, when the partners are close, their heart rate patterns indicate an interaction that is collectively meaningful in some way.’

In their study, Professor Ogolsky and colleagues recruited 10 heterosexual, married couples — each of whom had been in their relationship for 14–65 years and were aged between 64–88 — and monitored them for two whole weeks.

Each participant wore a Fitbit throughout the day to measure their heart rate in real-time, while a second device measured their proximity to their partner in tandem with fixed sensors placed around each couple’s home.

The team telephoned each couple every morning to remind them to put on the Fitbit and the second tracking device, while an evening call allowed them to survey the pairs about their health, well-being and relationship dynamics throughout the day.

‘We also wanted to know if all three time-series worked together to give us unique information. Can we use any of them to predict the others? And the answer is yes.

‘All three need to be included for us to be able to predict any one of them well.’ 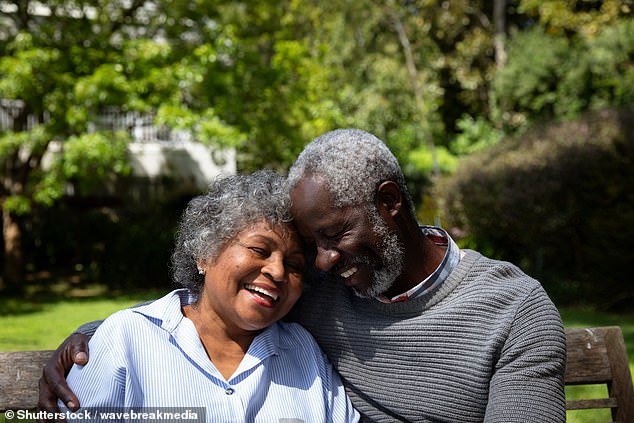 The team found that the couples heart rates synchronised with a so-called lead-lag relationship, in which changes in each pair’s pulses would be led by one partner, with the other following. Sometimes, the husband would lead, other times the wife

The team found that the couples heart rates synchronised with a so-called lead-lag relationship, in which changes in each pair’s pulses would be led by one partner, with the other following. Sometimes, the husband would lead, other times the wife.

‘When one partner triggers the other partner, they start a unique couple-level dance that affects their physiology and their patterns throughout the day.’

Within each couple, however, no clear patterns emerged behind the shifts — and the small study size, the team noted, prohibited meaningful comparisons between pairs.

‘We found each day is a unique context that changes depending on circumstances,’ the romantic relationship expert added.

‘Couple interactions, their attitudes, behaviours — whether they’re close to each other or far away — change all the time.

‘Even across 14 days, couples are not consistent enough in these kinds of objective patterns to allow us to make any couple-level conclusions.

‘We can make only make day-level predictions.’

According to the team, their findings are important for relationship research — a field which usually relies on drawing conclusions across couples — going forward.

‘If we really want to understand the unique patterns of interaction that happen within couples, we need to start focusing our attention on micro processes — the small interaction patterns that accumulate over a day,’ Professor Ogolsky said.

Those, he concluded, ‘tell us about the nature of how couples’ interactions play out from moment to moment.’

The full findings of the study were published in the Journal of Social and Personal Relationships.

WHAT ARE THE FIVE STAGES OF A RELATIONSHIP AND HOW DO THEY AFFECT THE BODY?

Each of these stages has a different impact on our psyche and health, researchers at eHarmony found in a 2014 survey.

Marked by intense infatuation and sexual attraction, symptoms noted by couples included weight loss (30 per cent) and a lack of productivity (39 per cent).

Biologically, it’s reported that during this early stage of dating, both men and women create more of the sex hormones testosterone and oestrogen.

As a result more than half – 56 per cent – noted an increase in their libido. 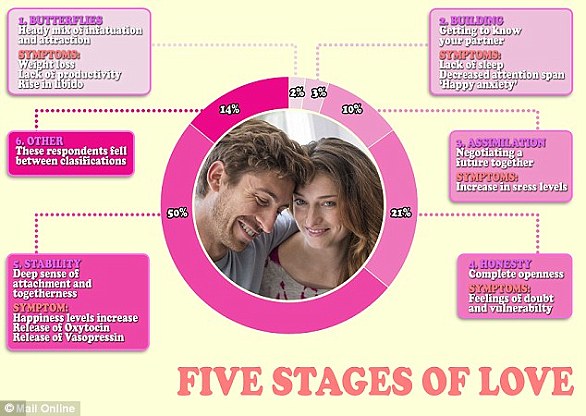 As the initial attraction gives way to learning more about one another, the honeymoon stage subsides and a couple begin to build their relationship.

eHarmony’s study estimated around three per cent of Britons in relationship are currently at stage two.

The body releases neurochemicals called monoamines, which speed up heart rate, trigger rushes of intense pleasure and replicate the effects of Class A drugs.

The biological effect culminates in a feeling of ‘happy anxiety’, where people can think of little else than their blossoming relationship.

Forty-four per cent of the study participants noted a lack of sleep while 29 per cent reported a their attention span had been adversely affected.

Having established whether the other person is ‘right’, stage three forces a couple to question whether the ‘relationship’ itself is right.

Questions over the future of the union and forming boundaries in the relationship can lead to a rise in stress levels, reported by 27 per cent of those taking part in the study.

Each of the five stages of a relationship has a different impact on our psyche and health, researchers at eHarmony found in a 2014 survey (stock image)

Stage three combines with stage four, where people open up showing the ‘real you’ sees the first real rise in stress levels and anxiety.

‘This stage deals with the concept behind how we all put on our best faces, through social media we edit our lives as well as our pictures to make it appear as though everything is fine,’ psychologist Dr Linda Papadopoulos, who assisted with the study, told MailOnline.

Opening up completely triggered feelings of doubt and increased vulnerability in 15 per cent of participants.

If a couple can weather the emotional rollercoaster of the first four stages, the fifth and final stage, stability, brings with it increased levels of trust and intimacy.

eHarmony found 50 per cent of respondents had reached this stage, and 23 per cent reported feeling happier as a result.

Biologically, vasopressin – a powerful hormone released by men and women during orgasm – strengthens feelings of attachment.

‘This is where we see a real level of contentness,’ Dr Papadopolous told MailOnline.

‘We found the body releases wonderful hormones which helps couples bond. We noted a real sense of attachment, and a sense of “you have got my back and I’ve got yours”.’