Relatives of MH370 victims today presented what they believe are pieces of debris from the aircraft, which they hope can help solve the mystery of the lost plane.

The debris was presented at a press conference at the Malaysian Ministry of Transport’s headquarters in Putrajaya on Friday, as they were officially handed over to the government.

The five new pieces of debris were found off Madagascar, where some debris from MH370 has been found before, most recently in August.

Flight MH370 was on its way from Kuala Lumpur to Beijing on March 8, 2014, with 239 people on board, when it disappeared and sparked a mystery that has gripped the world. 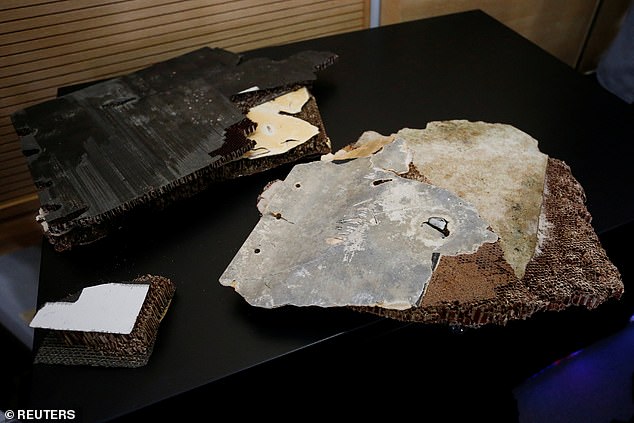 Pieces of the puzzle: Relatives of the victims believe the five pieces of debris is from the missing jet, which disappeared in 2014 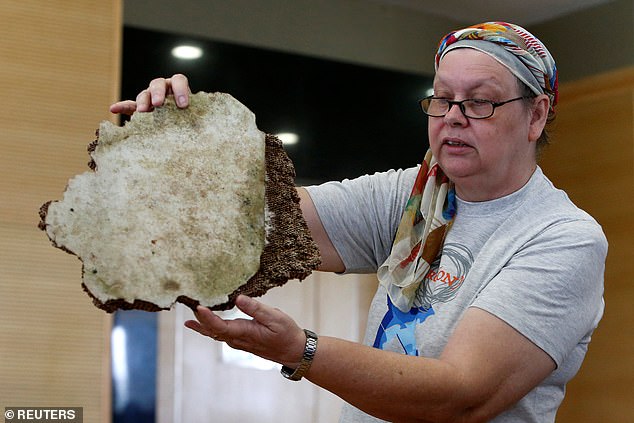 Potential leads: Jacquita Gonzales, the wife of in-flight supervisor Patrick Francis Gomes, holds up one of the pieces found

An official report released in July following a lengthy investigation and years of fruitless searching gave no new clues about why the plane disappeared, sparking anger among relatives.

In a statement released by Voice370, the association for relatives of the vicims, they say there has been no word from the Malaysian government on further efforts or developments in the search since the July report.

Grace Subathirai Nathan, a lawyer whose mother, Anne Daisy, was on the plane said the items were found between December 2016 and August 2018, adding that ‘this… offers a fresh ray of hope to all the relatives.’

“The fact that debris is still washing up now means that the investigation should still be live. It shouldn’t be closed.’ 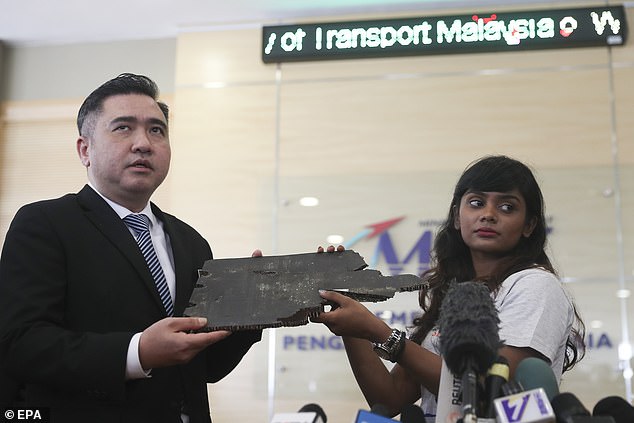 Handover: The debris were presented to the press before being handed over to Malaysia’s Transport Minister Anthony Loke Siew Fook 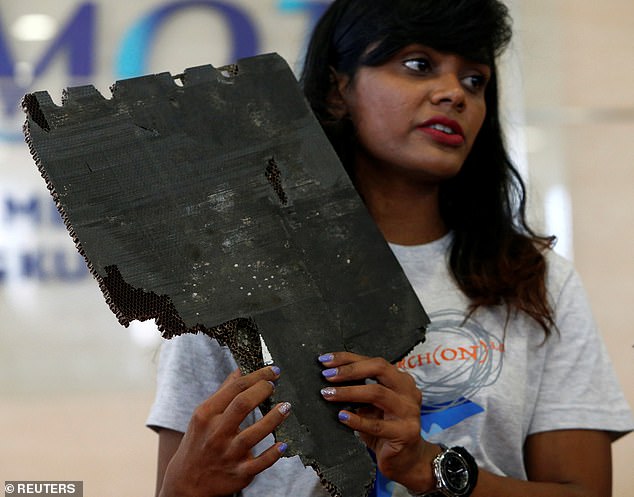 Details: Ms Nathan speaks to the press about the pieces of debris that the families of the victims have found off the coat of Madagascar 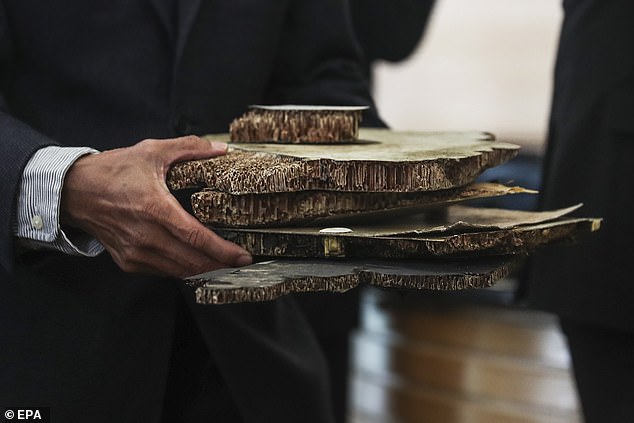 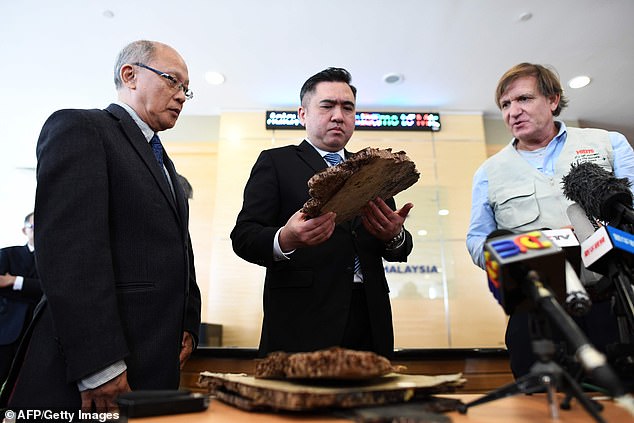 Ms Nathan’s father V.R. Nathan added the items were discovered by fishermen and that one piece of the debris ‘has part of a label still readable.’

‘We want the government to continue searching for these debris and piece them together like a jigsaw puzzle so that we can get some clue as to what happened to the plane.’

‘We will need some credible leads before we reopen the search,’ he told reporters.

T. Mohan, one of the experts who took part in the investigation, told AFP that one of the items ‘is a floor panel of a Boeing aircraft.’

Malaysian and international investigators believe the jet veered thousands of miles off course from its scheduled route before eventually plunging into the Indian Ocean.

The cause of the planes sudden diversion off course is still not known. 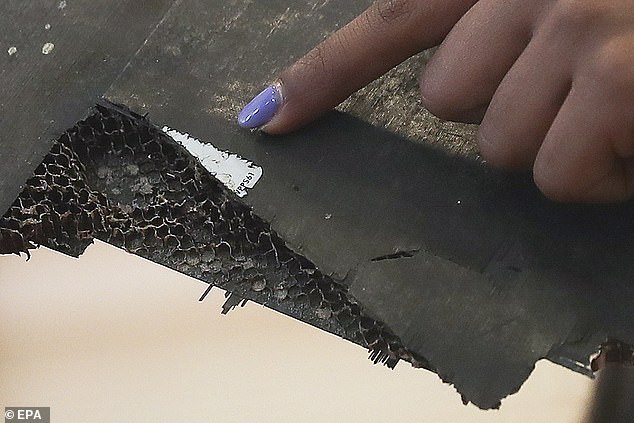 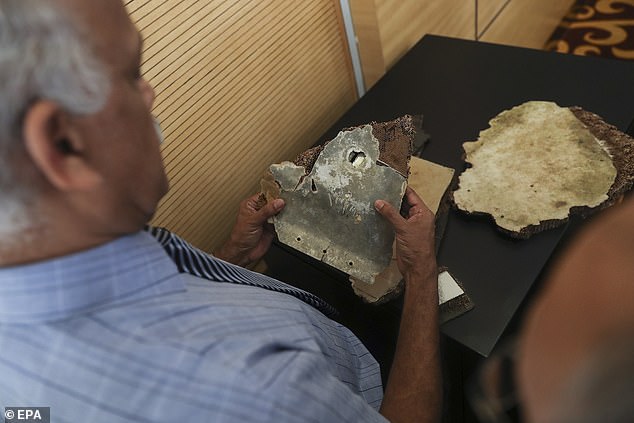 Hope: A Malaysian official inspects debris which some relatives of the victims believe belong to MH370 during a press conference at ministry of transport headquarters in Putrajaya 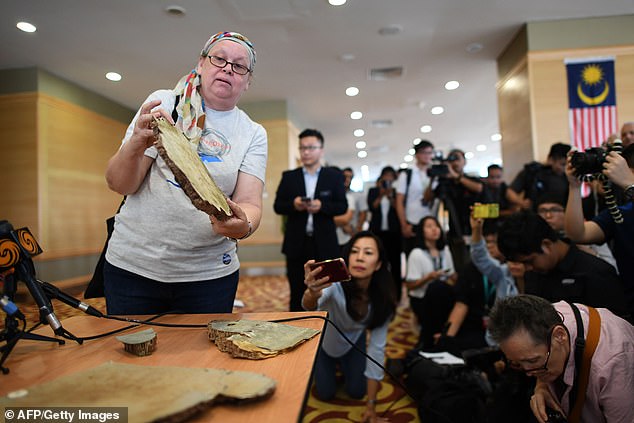 Jacquita Gonzales, wife of MH370 steward Patrick Gomes, shows a piece of debris believed to be from flight MH370 during a press conference in Putrajaya

In all, 27 pieces of aircraft debris have been collected from various places around the world but only three wing fragments that washed up along the Indian Ocean coast have been confirmed to be from the missing Boeing 777.

In May, Malaysia called off a three-month search by U.S. firm Ocean Infinity, which spanned 112,000 sq km (43,243 sq miles) in the southern Indian Ocean and ended with no significant findings.

Malaysian Prime Minister Mahathir Mohamad had said in May that the country would consider resuming the search only if new clues come to light.

In July, investigators released a 495-page report, saying the plane’s controls were likely deliberately manipulated to take it off course but they were not able to determine who was responsible.

Hijacking was not ruled out as the reason behind the plane diverting from its course. 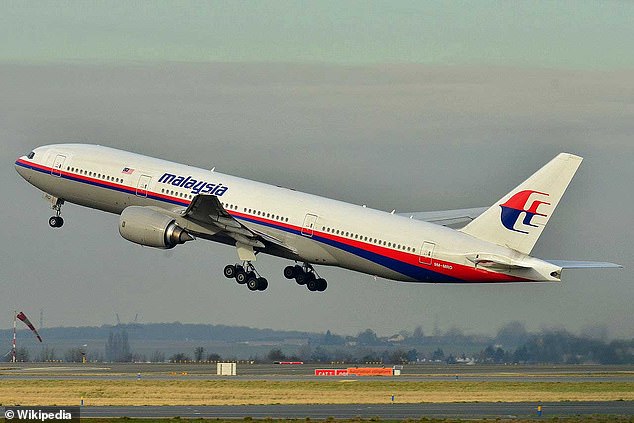 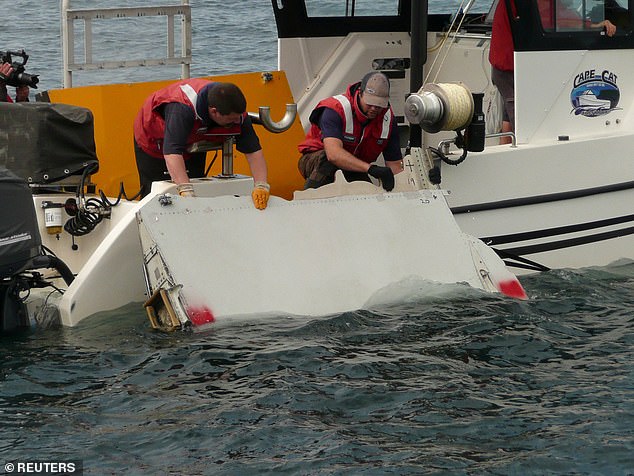 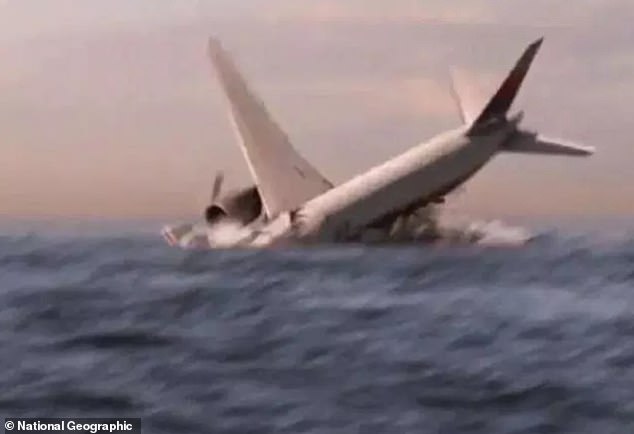 The official search for the plane ended in May but a new TV documentary revealed for the first time the plane’s suspected final moments, with a reconstruction showing it plunging towards the sea in a ‘death spiral’.

Investigators on the documentary said the plane almost certainly ran out of fuel after flying in the wrong direction over the Indian Ocean for six hours.

This could have been caused by the right engine breaking down first, meaning the autopilot would have lurched the plane to the left to compensate.

In July 2015, a wing part known as a flaperon was found on Reunion Island, east of Madagascar. Since then, 27 pieces of debris have been found.

One of the pieces was a TV monitor, found by amateur wreckage hunter Blaine Gibson. 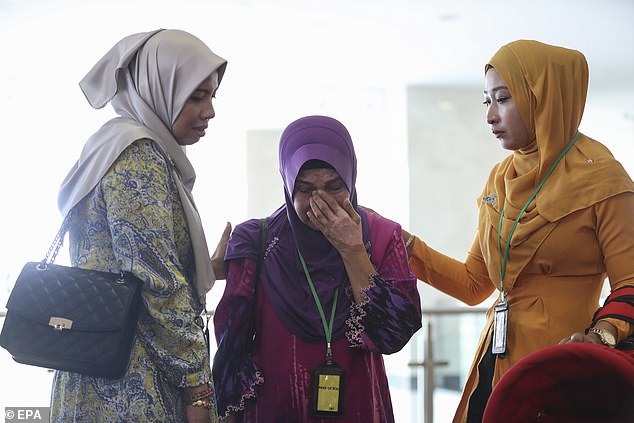 Sarah Nor (centre), the mother of Norliakmar Hamid, a passenger on flight MH370 crying at the Ministry of Transport headquarters in Putrajaya, Malaysia, in July when the final report was released Last month a pilot claimed to have discovered parts of flight MH370 in the same area of the Cambodian jungle where a filmmaker was forced to abandon his pursuit of the plane’s wreckage because of ‘illegal loggers high on meth’.

Daniel Boyer said he has found the engine, tail and cockpit of the plane buried in the jungle north of Phnom Penh using Google Earth, just a month after British film producer Ian Wilson embarked on a two-day trek to find a ‘plane-shaped object’ he had sighted on Google Maps.

French police also said last month that officers were investigating if navigation data from MH370 could have been hacked to disguise the route it took before crashing into the ocean.

The new theory was revealed by Ghyslain Wattrelos, a Frenchman who lost his wife and two teenage children when Flight 370 vanished.