By Nick Enoch and Luke Andrews For Mailonline

This is the terrifying moment an angry rhino chased a jeep of safari-goers for 500 yards down a dirt track on a game reserve in South Africa.

The film was shot by Rian Boshoff, a financial adviser, who was part of a group looking for wildlife at Sabi Sands, which shares an unfenced border with Kruger National Park.

The white rhino, which can run at up to 25mph, charged the tourist jeep and pursued it for almost two minutes.

This is the terrifying moment an angry rhino chased a jeep of safari-goers along a dirt track in Sabi Sands, which has an unfenced border with Kruger National Park 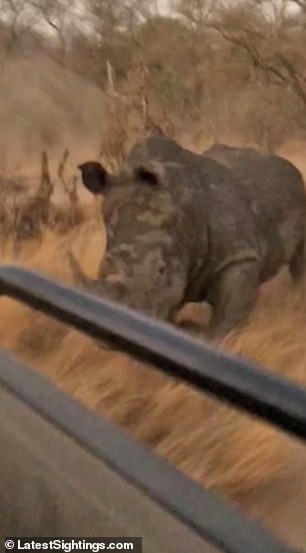 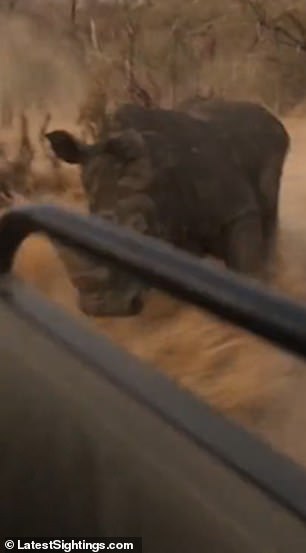 At the start of the clip the group scream on the jeep as the world’s third largest land mammal, weighing up to two tons, charges.

They then speed along the dirt track, sending dust flying, as the enraged mammal stays in hot pursuit and comes within inches of the vehicle.

After a nail-biting two minute pursuit the rhino comes to a halt and the tourists speed away.

Rian Boshoff said they were driving along a riverbed before the rhino ran at them.

‘He stood still right next to the road, looking calm, and we went past him to continue our leopard search.

‘As we did that, the rhino suddenly charged us!’ 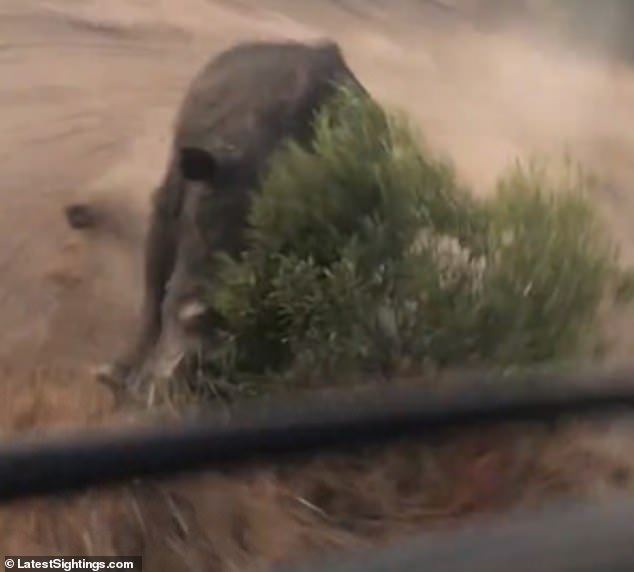 Rian said the guide stepped on the gas, sending them flying round corners like ‘madness’.

‘The guide decided to head for the bush by making a sharp right turn, trying to throw the rhino off guard, because of their bad sight,’ they said.

‘So we decided to head back to the road, so we could have a clear path to drive away on.’

Afterwards, the guide said it wasn’t the first time that this bull rhino had charged at a vehicle.

There are 20,000 white rhinos remaining in South Africa following decades of conservation efforts.

International conservation group Traffic blamed a ‘web of systematic corruption’ within the country’s justice system for this high level of poaching.

‘No action has been taken against this grossly corrupt alleged syndicate of justice officials’, they said in a statement last year.

The white rhino is listed as near threatened by the IUCN.

Weighing more than 2,000kg, living up to 50 years and able to run at 40kmph: Meet the white rhino 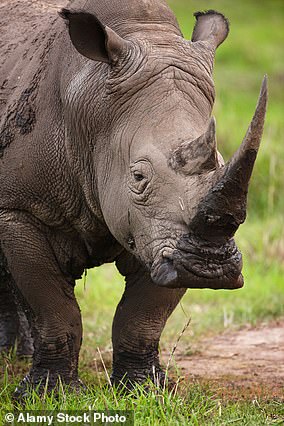 The white rhino, also known as the square-lipped Rhino, is found across Southern Africa with the majority of the population in South Africa.

Skin colour: Despite their names, there is no difference in skin colour between white and black rhinos. Both have grey skin.

Running speed: They can charge at speeds of up to 40kmph for short periods

Lifespan: Up to 50 years

Food: They eat grasses which their mouth has adapted to by developing a broad upper lip, or square lip

Horn use: The distinctive horn, which has made them a target for poachers, is used as a weapon against predators, and for dominance and threat displays while they are in contact with other rhinos

Population: Conservation efforts had raised their numbers to 20,000 last year

Status: Near threatened, according to the IUCN

Source: Save the Rhino