Thousands of people from all faiths rallied behind calls ‘for love to defeat hate’ at a service to remember those killed and injured in the Pittsburgh synagogue massacre.

Religious leaders, mourners and supporters came together for a special vigil tonight as Pittsburgh mourned the worst anti-Semitic attack in recent US history and the city’s ‘darkest hour’.

There was standing room only in the neoclassical surrounds of the Soldiers and Sailors Memorial Hall and Museum, with people lining the back walls, filling the lobby and others crouched on the floor for the ceremony. 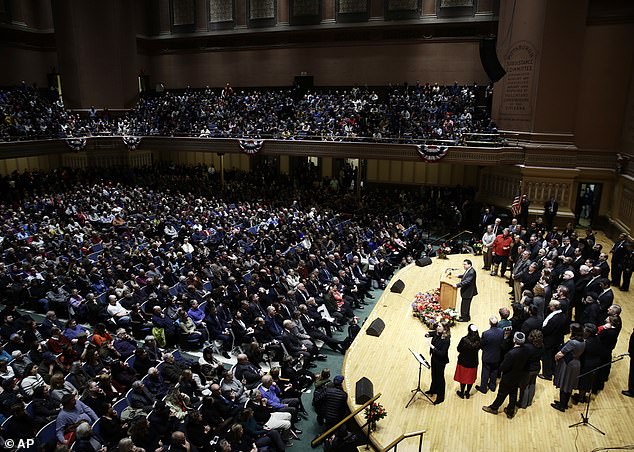 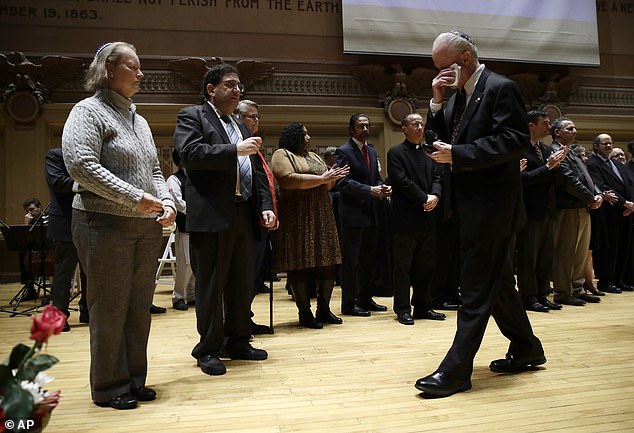 Robert Bowers, 46, is suspected of killing 11 and wounding six, including four police officers, when he entered Tree of Life Congregation and opened fire.

Rabbi Jeffrey Myers from the Tree of Life synagogue who helped pull worshippers to safety when the shooter opened fire minutes into Shabbat services, was the first person to address the congregation.

He told them: ‘I’m a victim. I’m a survivor. I’m a mourner. Words of hate are unwelcome in Pittsburgh,’  he said to cheers and a standing ovation.

‘Ladies and gentlemen it has to start with you as our leaders.

‘My words are not intended as political fodder. I address all equally. Stop the words of hate’. 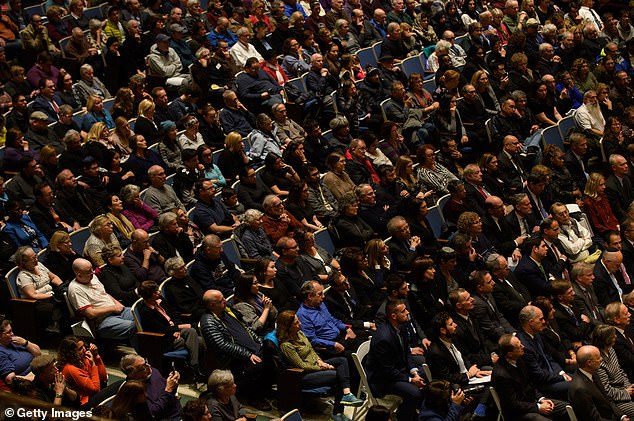 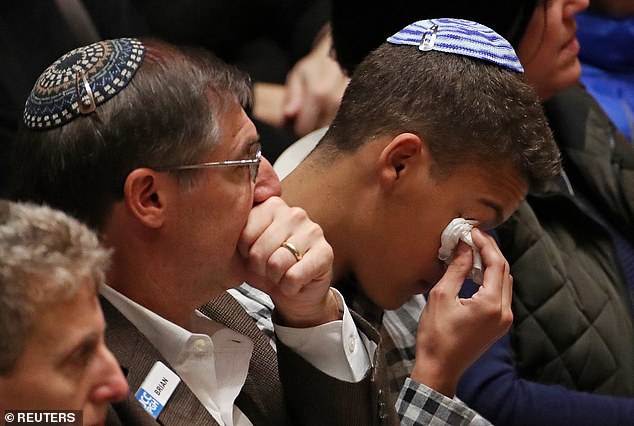 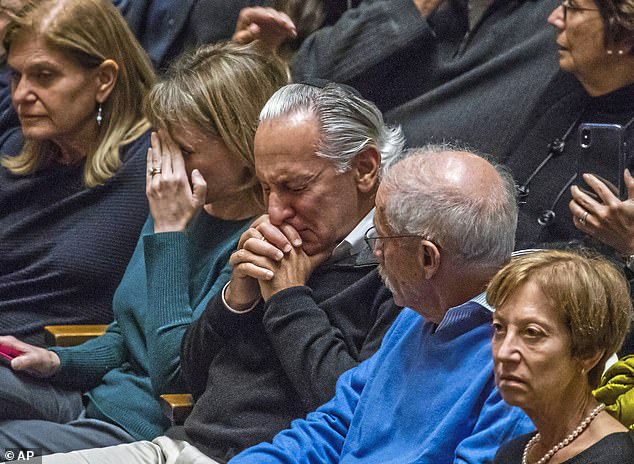 He finished with a memorial prayer in Hebrew, his voice aching with emotion, and wiping tears from his eyes with a handkerchief.

He claimed that Pittsburgh, the Pennsylvania city that made its fortune in the steel industry, is made of stern stuff and was proud of its sporting prowess and reputation as a sanctuary for all.

The names of the 11 dead, many of them elderly, were written on a screen, hanging before inscribed words from Abraham Lincoln, and the entire ceremony was translated into sign language for the deaf. 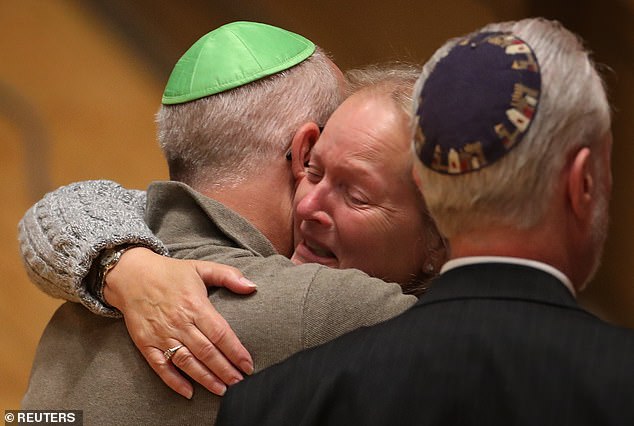 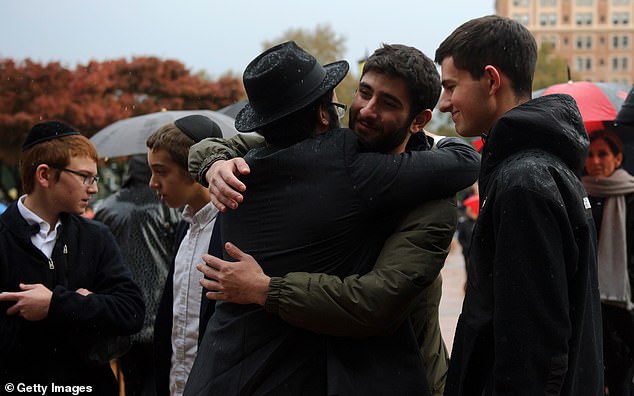 Pittsburgh authorities have released the identities of all 11 victims, including two brothers, a dentist, and a new grandfather, who were gunned down while worshipping at the synagogue.

Pittsburgh Mayor Bill Peduto  told the audience: ‘We will defeat hate with love. We will be a city of compassion welcoming to all people no matter what your religion or where your family came from. 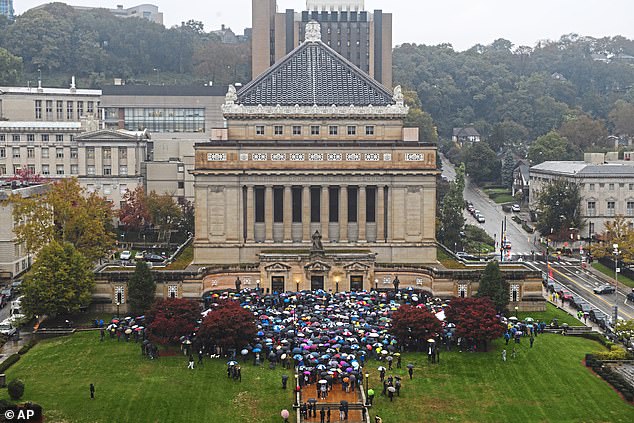 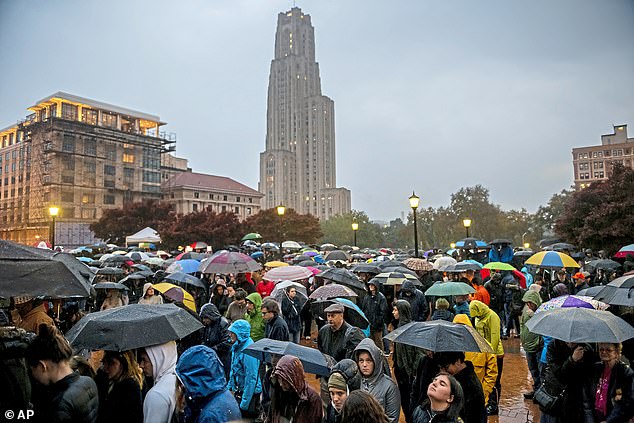 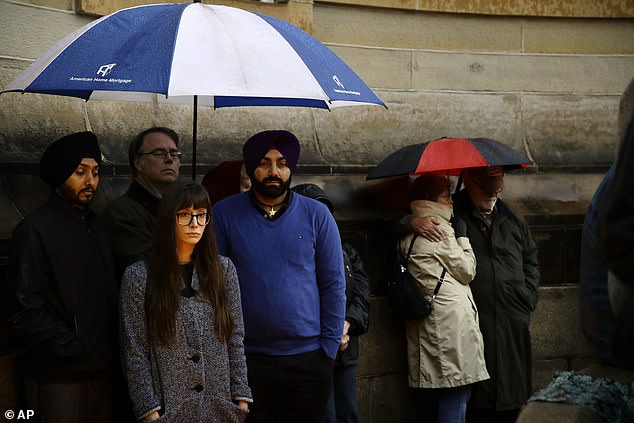 ‘We will drive anti-Semitism and the hate of any people back to the basement on their computer and away from the open discussions and dialogue around the city, around this state and around this country’.

The ceremony closed with a quartet from the Pittsburgh Symphony playing two pieces, one written by a Holocaust survivor whose family perished in Kristallnacht.

Wasi Mohamed, head of the Islamic Center of Pittsburgh, announced that Muslims had already raised more than $70,000 to help their Jewish neighbors, news greeted by a spontaneous standing ovation. 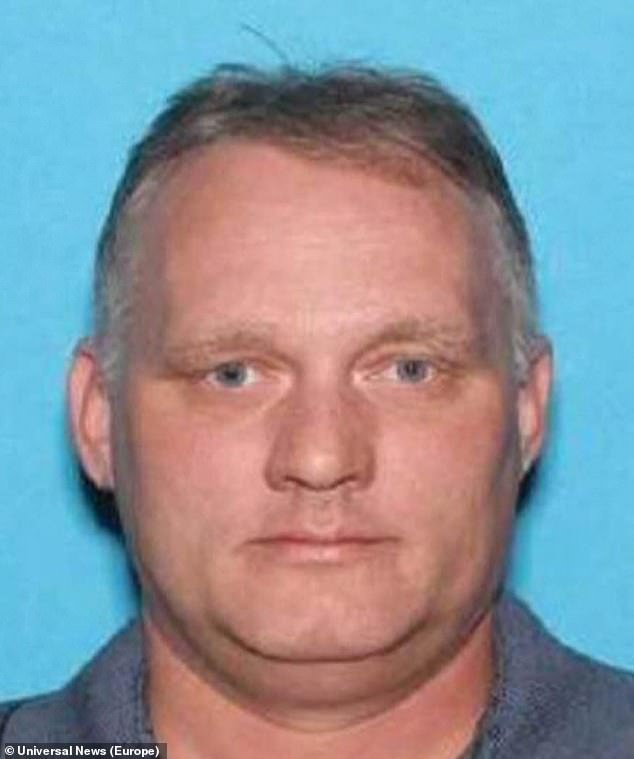 Gunman Robert Bayers faces 29 federal charges, 22 of which are punishable by death 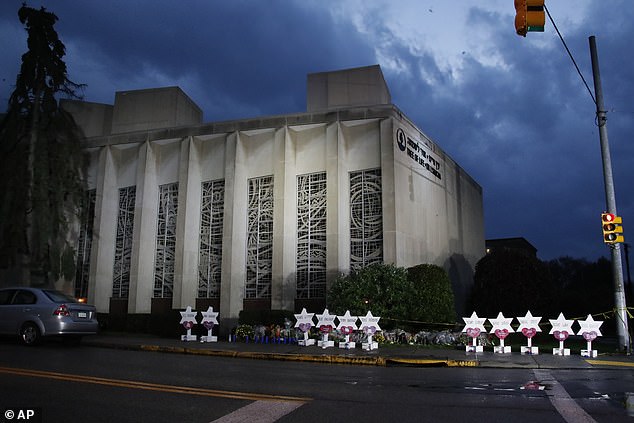 ‘We just want to know what you need. If it’s more money, let us know. If it’s people outside your next service protecting you, let us know we’ll be there,’ he said.

Israeli cabinet minister Naftali Bennett, who flew through the night to mourn with Americans, called the slaughter the deadliest anti-Semitic attack in the history of the United States.

‘Nearly 80 years since Kristallnacht when the Jews of Europe perished in the flames of their houses of worship, one thing is clear,” he said.

‘Anti-Semitism, Jew-hating is not a distant memory… nor a chapter in the history books, it is a very real threat. 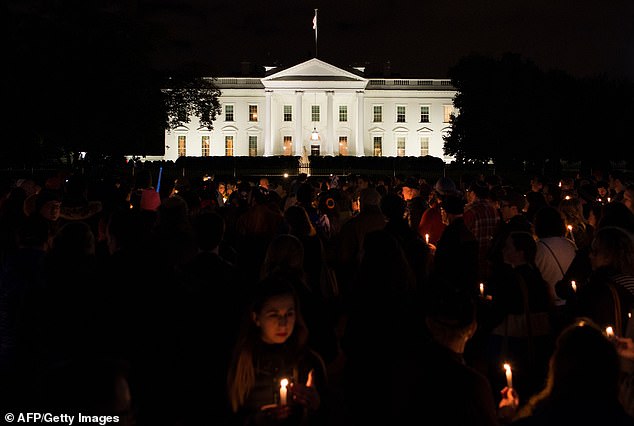 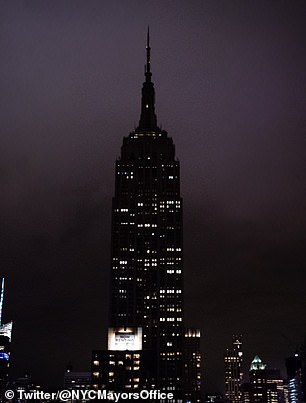 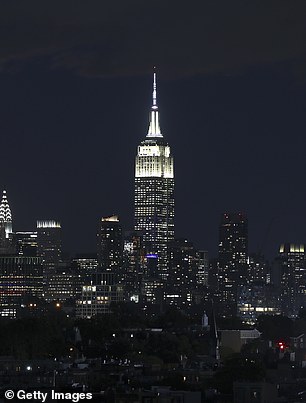 The tower lights of the Empire State Building (left) remain in darkness to remember the victims, compared to the tower lights as they normally appear (right) when switched on 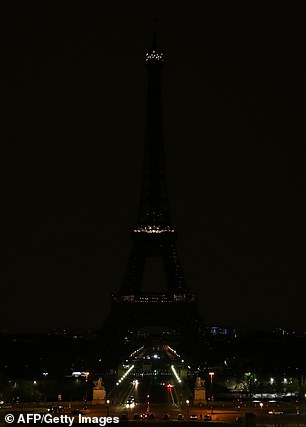 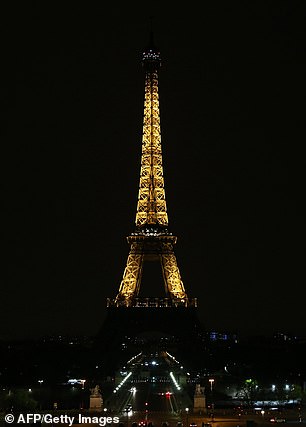 The tower lights of the Eiffel Tower (left) remain in darkness to remember the victims, compared to the tower lights as they normally appear (right) when switched on 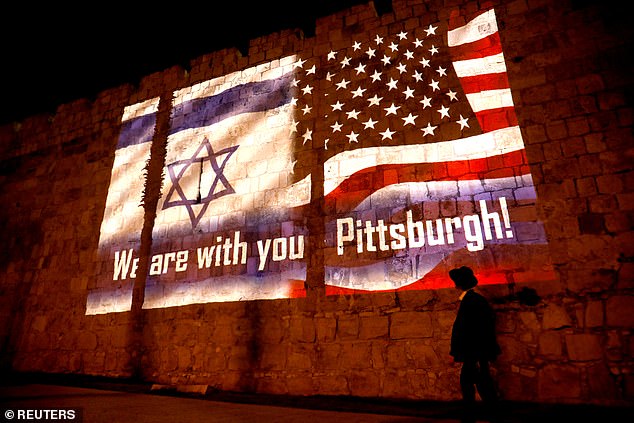 A speaker informed the room that outside ‘thousands’ of people had braved the cold and rain to listen to the more than 90-minute service on loudspeakers.

‘I thought that it was beautiful and mournful, and it was hopeful and it was a true reflection of what Pittsburgh has to offer,’ said Mark Dixon, a 42-year-old filmmaker huddling in the chilly weather outside.

‘I love this city and it pains me to see it shattered, even for just a moment by hate, and so I just had to come and be present for the ceremony that ultimately rejects hate’.

The service was one of several events that took place this weekend to honor the victims of the attack.

The Pittsburgh Steelers and Cleveland Browns observed a moment of silence at Pittsburgh’s Heinz Field for the 11 people killed by a gunman inside a synagogue in the city Saturday.

After pulling out a 33-18 win, quarterback Ben Roethlisberger paid tribute to tribute to a former team staffer affected by the tragedy.

Israel also paid tribute to the victims of Saturday’s massacre at a Pittsburgh synagogue with messages of solidarity.

Projected images on the walls of Jerusalem’s Old City showed the Israeli and American flags side by side with the caption ‘We are with you, Pittsburgh!’

A candlelight vigil in front of the White House also took place this evening after the shooting at the Tree of Life Synagogue.

The deceased include several people who would have been children during the Holocaust and rise of Nazism.

Robert Gregory Bowers killed the victims inside the Tree of Life Synagogue on Saturday during worship services before a tactical police team tracked him down and shot him, police said in an affidavit, which contained some previously unreported details on the shooting and the police response.

Bowers, who is a long-haul trucker, told officers that Jews were committing genocide and that he wanted them all to die, according to the charging document.

Two SWAT team members were then shot during a gun battle with Bowers as the suspect tried to fight them off from the third floor.

Bowers then told an officer while he was being treated for his injuries ‘that he wanted all Jews to die and also that they (Jews) were committing genocide to his people,’ the affidavit said.

He was later charged with 29 felonies, including 11 counts of murder and hate crimes, for storming the synagogue in Squirrel Hill, Pittsburgh, and gunning down the helpless members of the congregation worshiping during their Sabbath.