A religious teacher accused of plotting terror attacks across London kept ISIS propaganda and bomb-making videos in his bedroom and a knife in his car, a court heard.

A recording was discovered of Umar Ahmed Haque, 25 saying ‘We are here to cause terrorism, we are a death squad sent by Allah,’ it is alleged.

In the recovered film a voice can be heard boasting that ISIS territory was as big as the UK and that every day 18 coalition soldiers committed suicide before even entering battle.

The voice goes on, referring to the coalition of devils’  including Iran and Turkey who oppose ISIS, to say: ‘Bring it on, your numbers only increase our faith. Our ally is the greatest – he is Allah and all glory belongs to him.’

Among the ISIS propaganda in Haque’s home police found YouTube videos about how to build explosive substances including a a guide on ‘how to extract flash powder from fireworks.’

An expert told the court that a viable explosive substance could be made if you were to copy the video and you had a detonator available.

Another video showed the explosion of a pipe bomb but did not provide any instructions on how to construct it.

A Dell laptop found in the bedroom contained jihadi material and a photo of a police officer patrolling Horse Guards in London.

Officers also found an article from the ISIS magazine Rumiyah about the targeting of kafirs or unbelievers.

Haque is said to have shown videos of beheadings and people burning British passports to pupils he taught at the all-Muslim Lantern of Knowledge private school in Leyton, east London between September 2015 and September 2016.

He had also taught pupils at the Ripple Road Mosque in Barking, east London, where he made students ‘role play’ a battle between ISIS and UK police officers.

He decided to carry out terror attacks between late 2016 and early 2017, it is alleged.

Haque is on trial with Nadeem Ilyas Patel, 26, who allegedly plotted with him together to obtain a firearm; Abuthaher Mamun, 19, who allegedly traded in financial options to finance the terror attacks, and Muhammad Abid, 27, who denies failing to disclose information about Haque’s terror planning.

In covert recordings with Mamun, Haque said: ‘We are here to cause terrorism, we are a death squad sent by Allah,’ it is alleged.

All four men were detained in a string of raids on May 17 after an investigation by MI5 and the Metropolitan Police’s Counter Terrorism Command.

Haque, of Windsor Road, Forest Gate, east London, denies two counts of preparing to commit acts of terrorism, one count of dissemination of terrorist publications and one count of conspiracy to possess a firearm with intent to cause fear of violence.

He admits to dissemination of terrorist publications, and four counts of collection of information likely to be useful to a terrorist.

Patel, of Romford Road, Forest Gate, denies conspiracy to possess a firearm with intent to cause fear of violence. He admits possession of a prohibited weapon.

Patel denied that charge but admitted to having a Walther P99 handgun adapted to discharge a noxious liquid or gas.

Following a search of Haque’s bedroom a USB stick was discovered in a chest of drawers containing ‘The Book of Jihad’ and ‘Constants in the path of Jihad.’

It also contained two copies of the ISIS magazine Dabiq and a video titled ‘The Islamic State and No Respite’.

A religious teacher groomed boys as young as 11 to join his ‘death squad’ as he planned terror attacks on London targets such as Big Ben, Heathrow and Westfield, a court has heard.

Umar Ahmed Haque, 25,(seen in a sketch from the Old Bailey on January 16) allegedly planned atrocities across London

Umar Haque, 25, worked at an all-boy Muslim school, the Lantern of Knowledge Islamic Boys Secondary School in Leyton, East London, between 2015 and 2016.

He allegedly planned to launch attacks with knives, guns or a car bomb on a range of targets, including the Houses of Parliament, and also singled out the troops who protect the Royal palaces in London and Windsor.

Other targets on his extensive list included Transport for London, which runs the capital’s public transport network, shoppers at Westfield shopping centres, Heathrow Airport, the Chinese and Iran embassies, media stations and banks in the City of London, jurors heard.

Haque, was stopped outside the town hall on Barking Road in East London in January last year on suspicion of driving without insurance.

He was searched and had three mobile phones and a red and silver memory stick on his key ring.

But Haque was not arrested for terrorism offences until the following May, when officers found a kitchen knife hidden behind the central console of the car, wrapped in a newspaper with pictures of semi-naked women.

On a memory stick in his pocket were a series of ISIS publications which gave advice on how to launch knife and vehicle attacks and included an article titled, ‘Why we hate you and why we fight you.’

Following the Westminster attack last March, Haque is said to have researched bomb-making and begun plotting attacks on London landmarks. 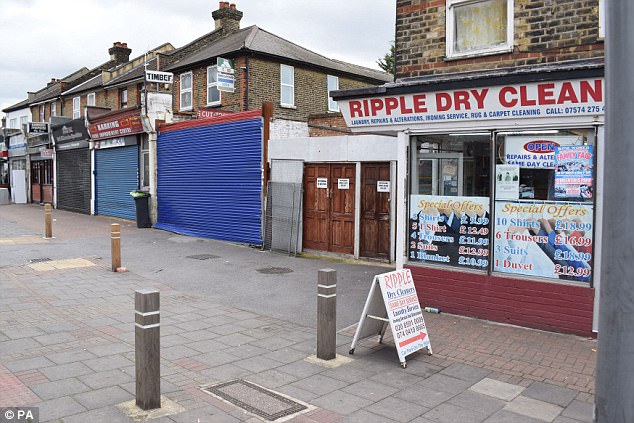 Haque taught pupils at the Ripple Road Mosque in Barking, east London, (pictured in an undated photo provided by the police) 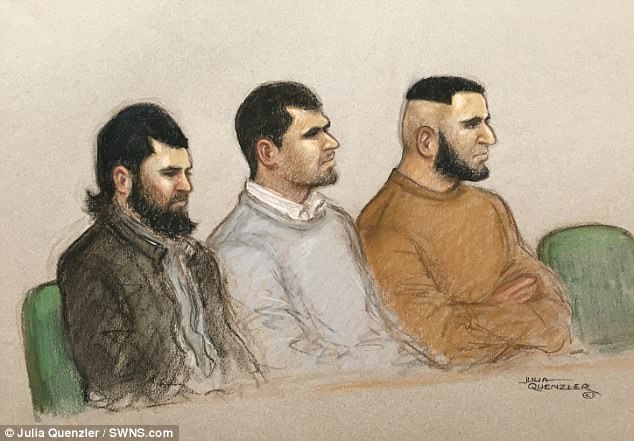 Umar Haque, Abuthaher Mamun, and Nadeem Patel depicted in a sketch taken during their trial at the Old Bailey on January 16

The officer who questioned Haque on the traffic stop, told the Old Bailey: ‘He was quite sweaty, quite fidgety. Having dealt with a number of traffic stops before, people do behave in a nervous or fidgety way when they have no insurance, I didn’t take it to be drugs or anything.’

But, he added: ‘He was making references to if we were prepared to die for the cause and various religious things.

‘He said he dreamt that he was stopped by the police three days ago and they let him go. He asked for our opinion on female rape victims and whether they were asking for it.’ 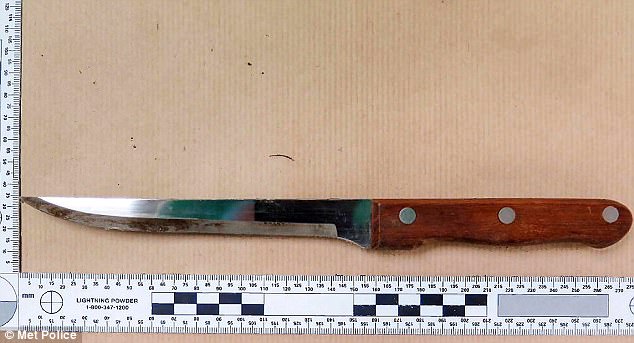 Haque was not arrested for terrorism offences until the following May, when officers found this kitchen knife hidden behind the central console of the car, wrapped in a newspaper 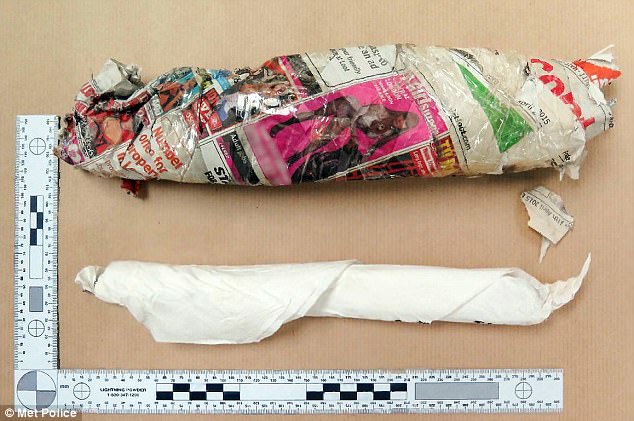 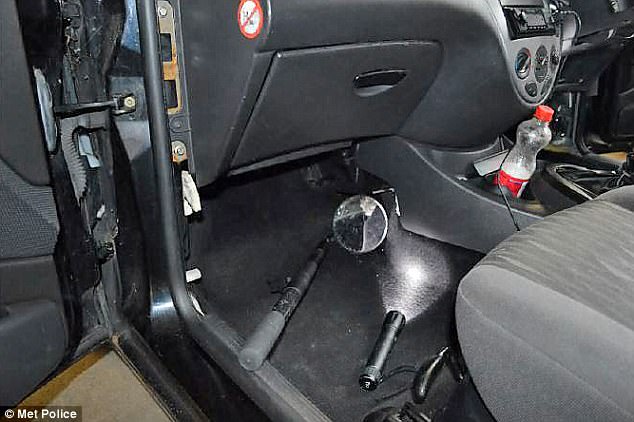 Haque, 25, was stopped outside the town hall on Barking Road in East London in January last year on suspicion of driving without insurance (pictured: his car)

PC Jodie Maskell also said in a statement: ‘He made reference to us working for the Queen and questioned how we felt about that, he also asked if we were prepared to die for the cause.

‘He made several references to police actions being a sign. He was clearly very religious and political in his stance.’

The officer wrote up an intelligence report in case Haque was caught without insurance again, he said. 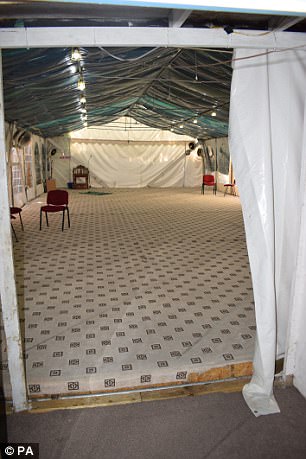 Haque was living with his parents and siblings in a large six-bedroom, semi-detached Victorian house in Forest Gate, East London.

The house had two reception rooms, two bathrooms and one bedroom converted to a home office, the court heard.

During a telephone call on the second day of his detention, he was allowed to make a phone call to his mother and was heard to say: ‘Have you been into my room yet, if you find anything in my room, I’m sorry…Is the house OK, is the carpet OK, is it a mess?’

Haque denies preparing acts of terrorism between March 25 and May 18 last year along with Abutaher Mamun, 19, who was at one of the classes.

Nadeem Ilyas Patel, 26, accepts possessing a blank-firing Walther P99 handgun but denies he was part of the plot.

Muhammad Abid, 27, denies possessing information which he knew, or believed, might be of material assistance in stopping a terrorist attack.