Thousands of Remainer and anti-austerity protesters have descended on Manchester city centre today where the Conservative party conference is taking place.

The People’s Assembly Against Austerity and the Reject Brexit, Defend Our Democracy march are both holding rallies in the city.

A Boris Johnson blimp also accompanied protesters on the march, reminiscent of the much-publicised Donald Trump balloon on his visit to the UK.

The six-metre tall inflatable depicted the Prime Minister dressed in blue shorts with red hearts and the word ‘Nigel’ on, and a T-shirt showing a £350 million bus.

A Boris blimp is inflated at Castlefield Bowl, Manchester as part of the Reject Brexit defend our democracy protest in Manchester today 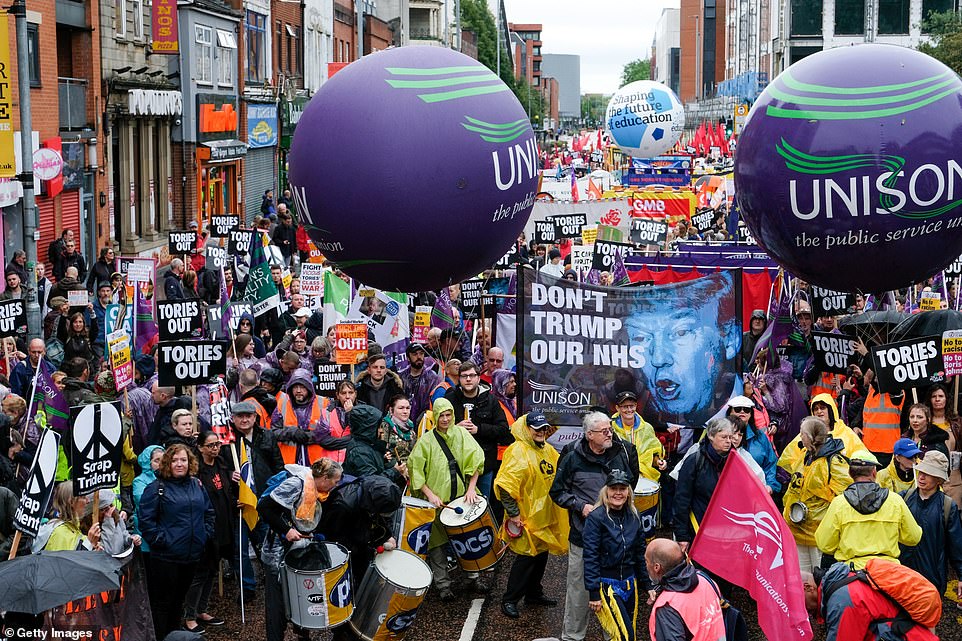 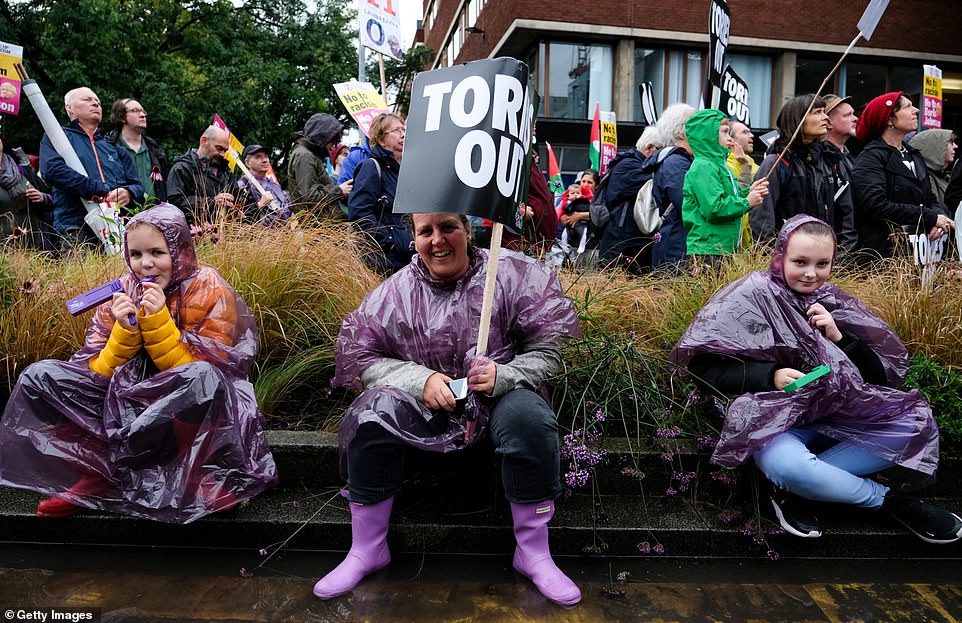 Anti-Conservative activists, including children, wrap up in ponchos and brave the rain in Manchester to rally against the supposed austerity 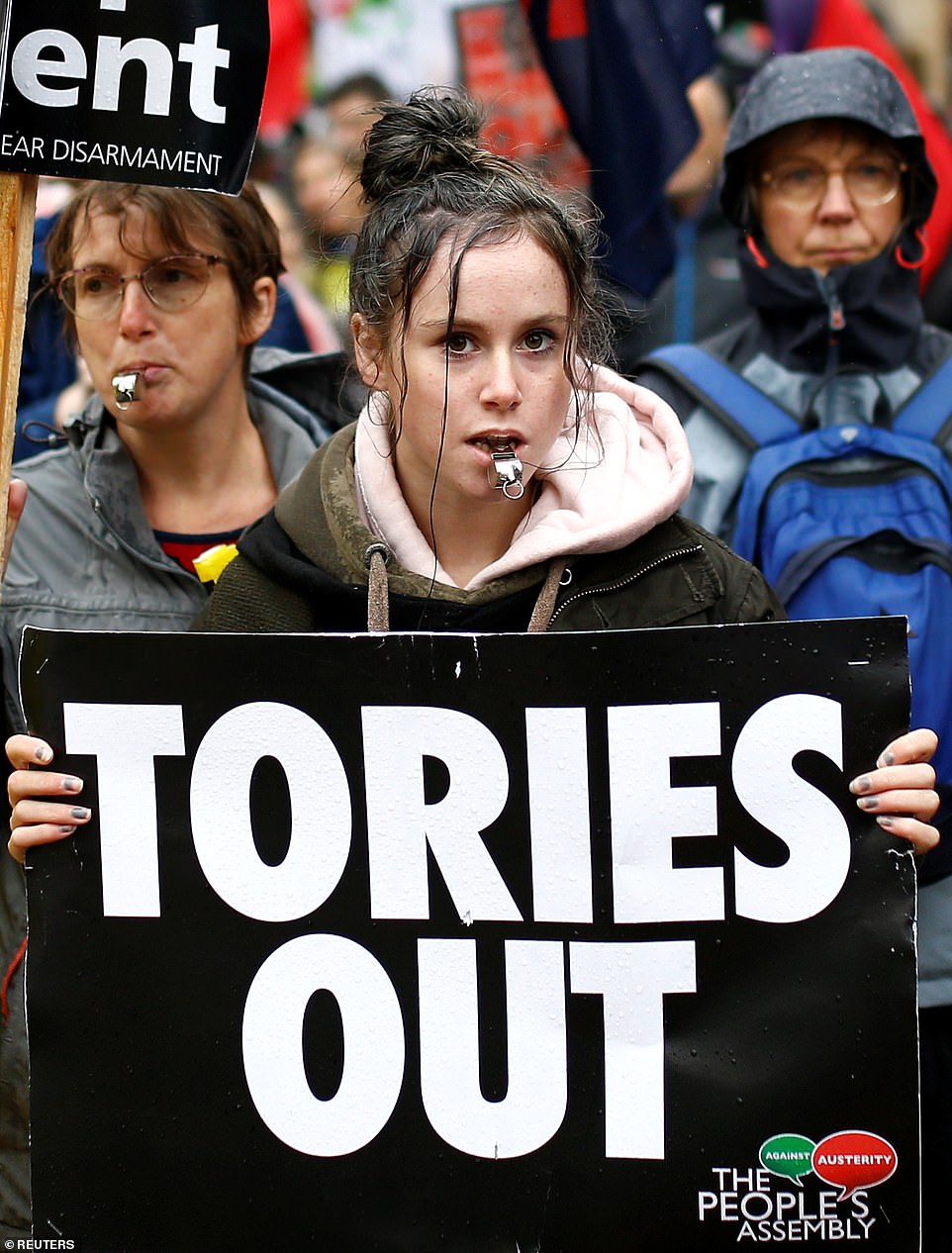 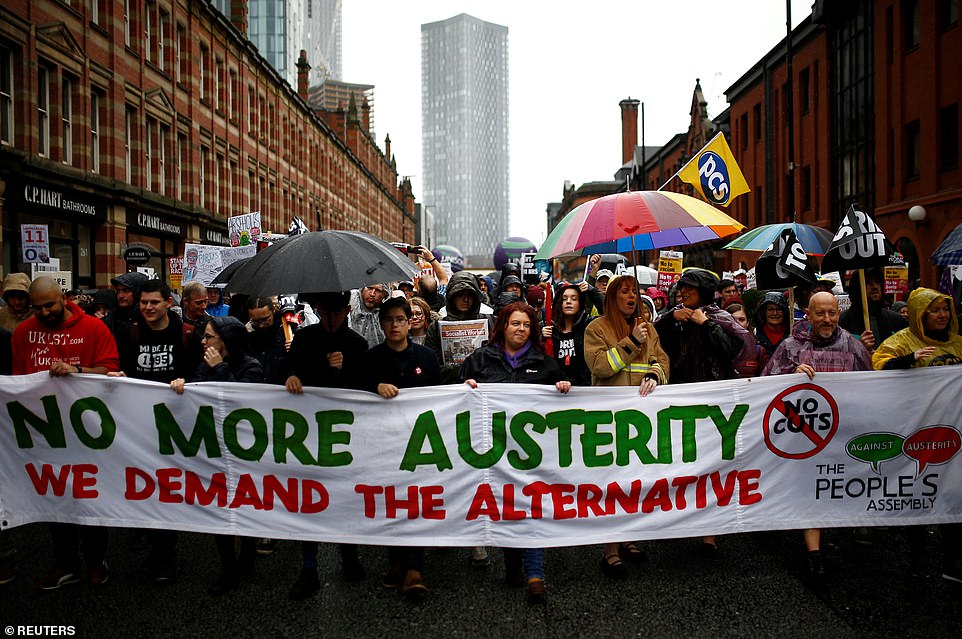 People march behind a banner which reads, ‘No more austerity, we demand the alternative’ and ‘no more cuts’, led by Labour MP Angela Rayner 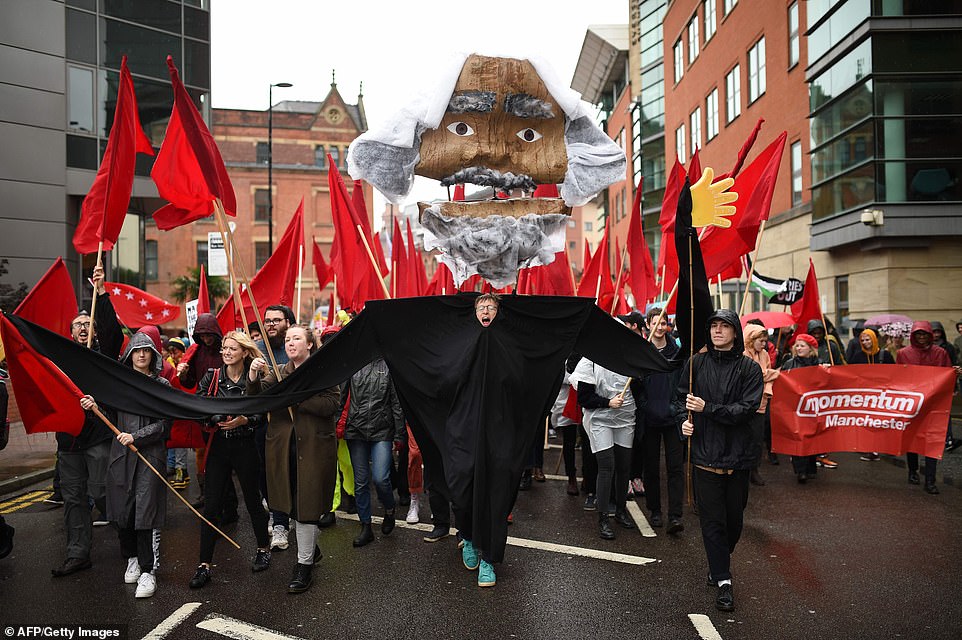 Momentum Manchester, who landed themselves in hot water this morning for praising a threatening banner about the Tories, marched behind a large figure of Karl Marx

The blimp was inflated at Castlefield Bowl ahead of a Reject Brexit – Defend Our Democracy event on Sunday afternoon.

Demonstrators gathered on Oxford Road at about midday for a Shut Down the Tories event before marching through heavy downpours to Deansgate, where a rally was due to be held.

Shadow education secretary Angela Rayner was among those heading the march, holding a banner saying ‘No More Austerity’.

Others held placards saying ‘Tories Out’ and ‘Defy Tory Rule’.

Marchers banged drums, blew whistles and chanted ‘Tories out’ and ‘Boris Johnson, shame on you’ as they made their way through the city, pausing as they passed near Manchester Central, where the conference is being held.

Roads through the city were closed by police as the march took place and mounted officers led the demonstrators.

Demonstrators were greeted by the blimp when they arrived for the rally after marching from Whitworth Park. 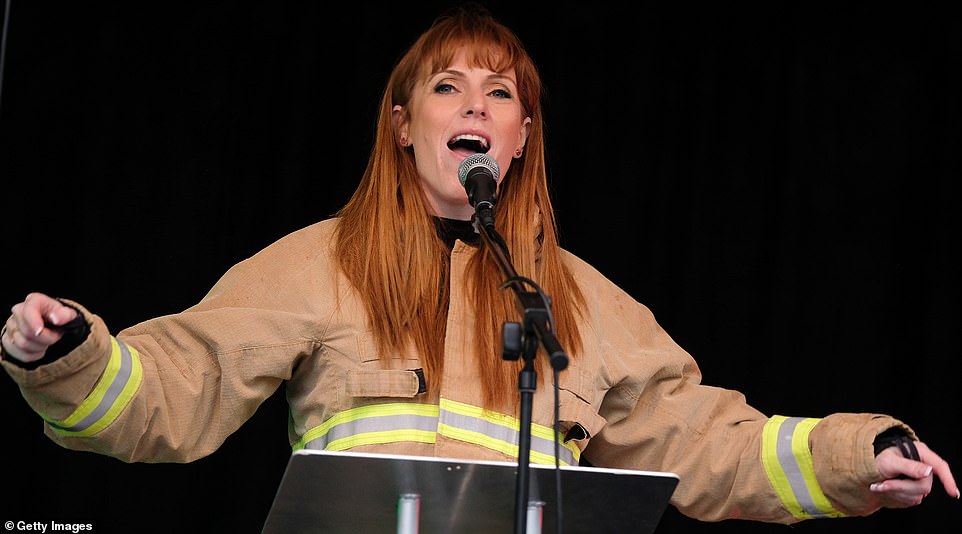 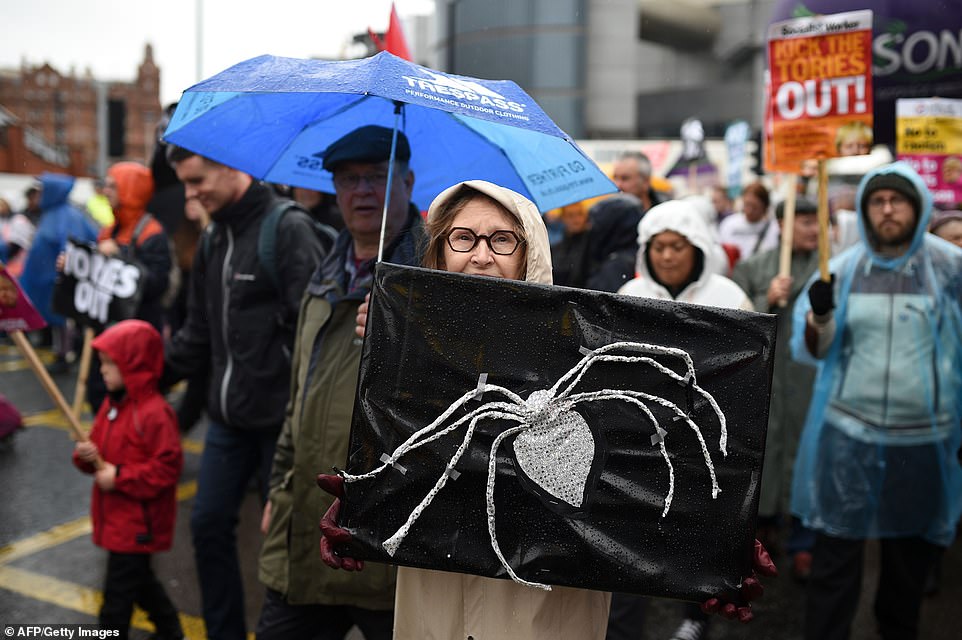 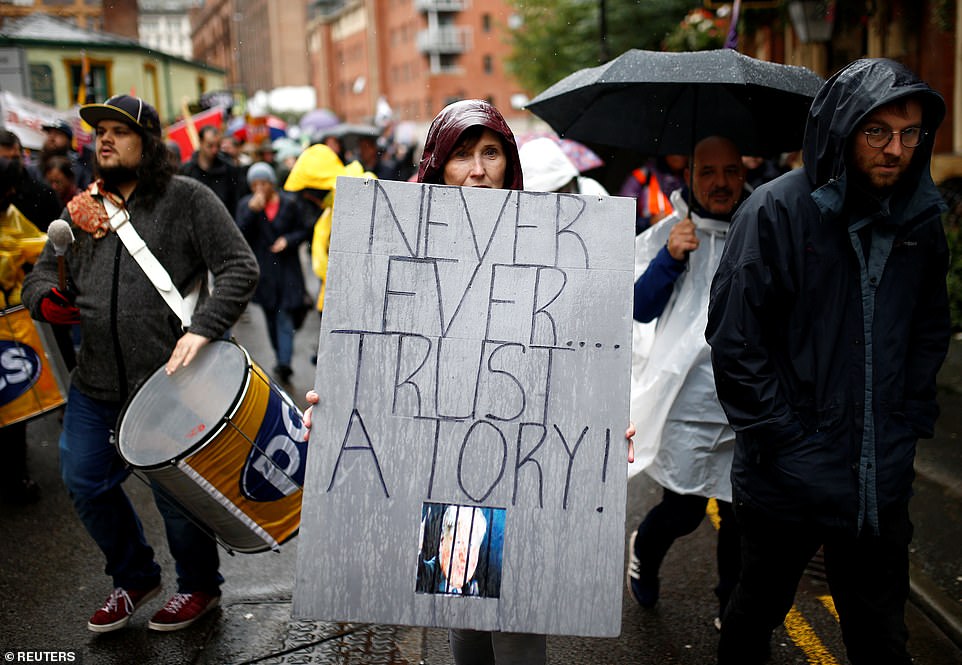 At a  pro-EU demonstration against the Conservative party, a protester carries a placard with a picture of Boris Johnson behind bars with the slogan, ‘Never ever trust a Tory’ 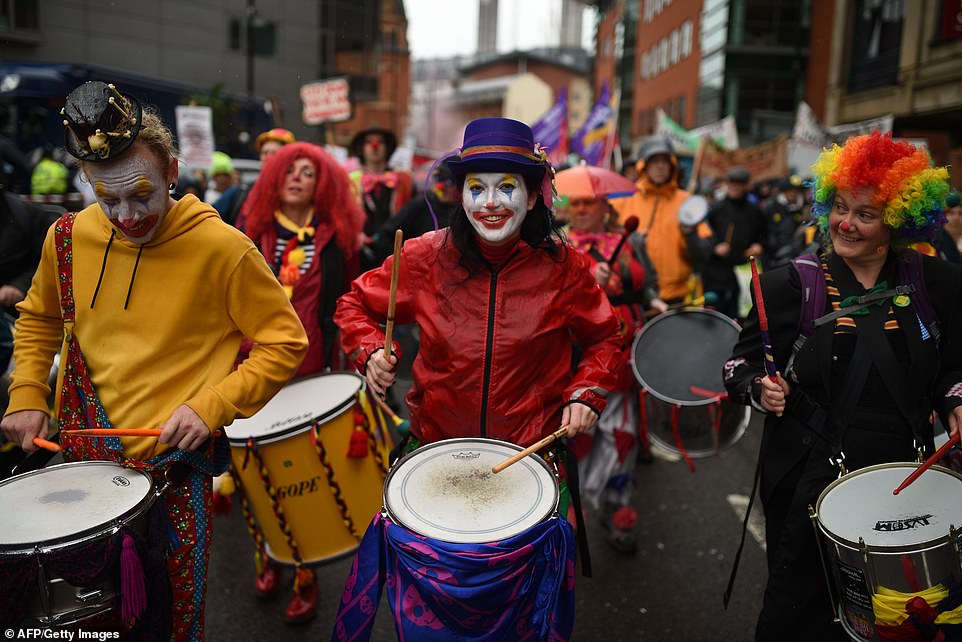 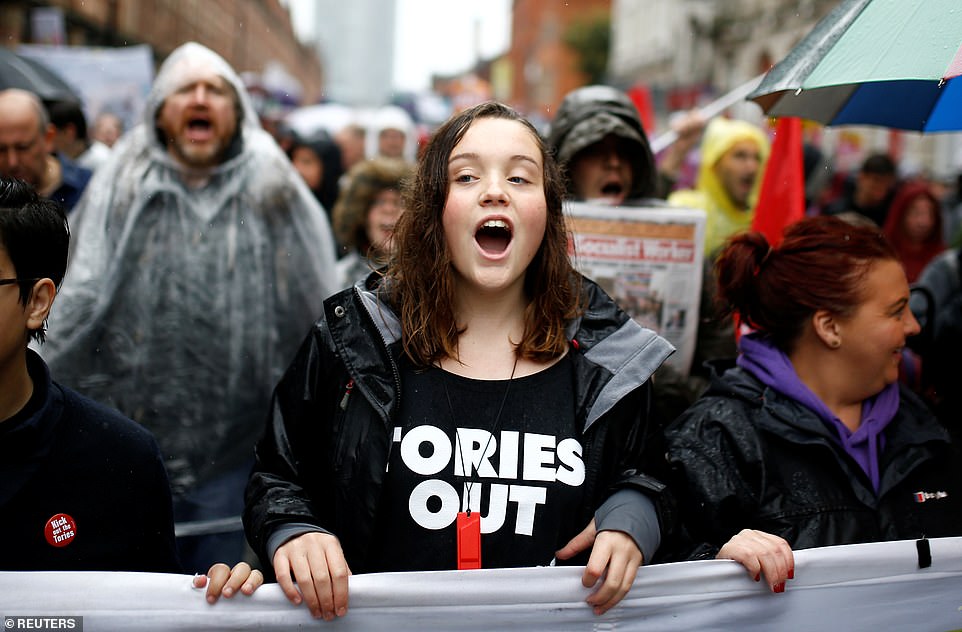 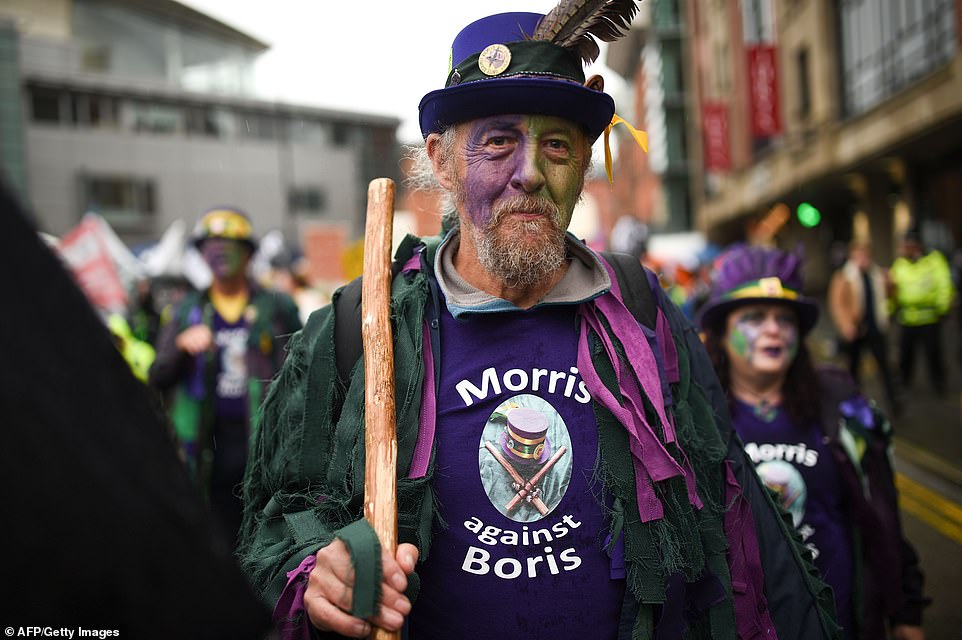 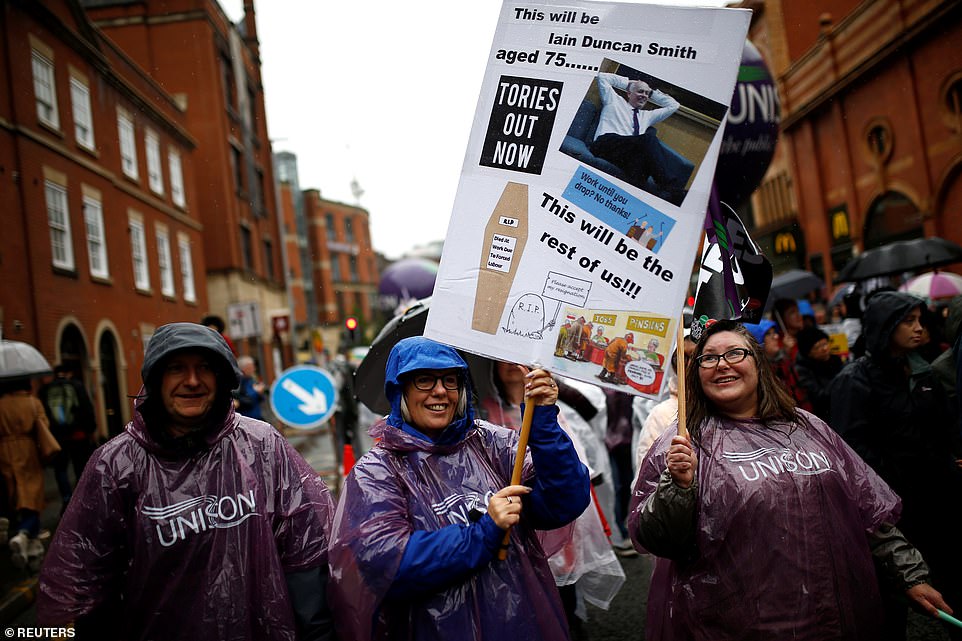 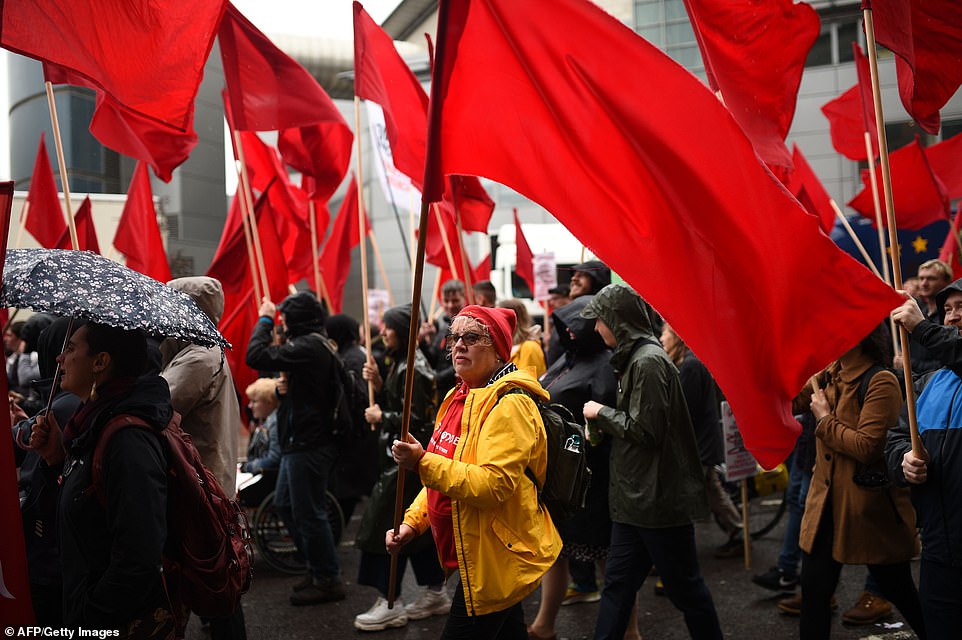 Demonstrators wave red flags, the colour associated with Labour, at a Momentum march through the city of Manchester 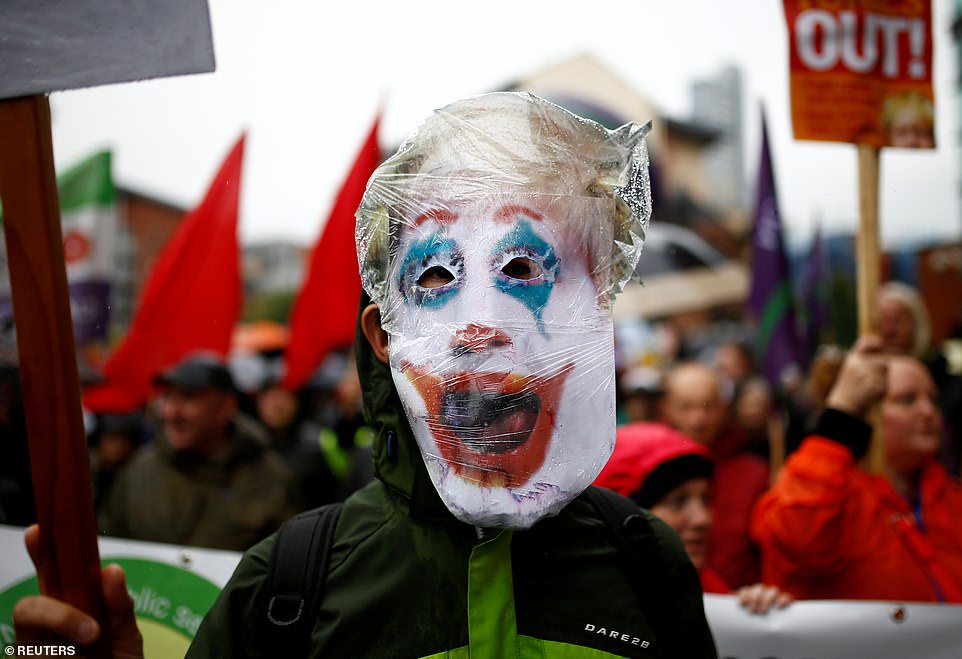 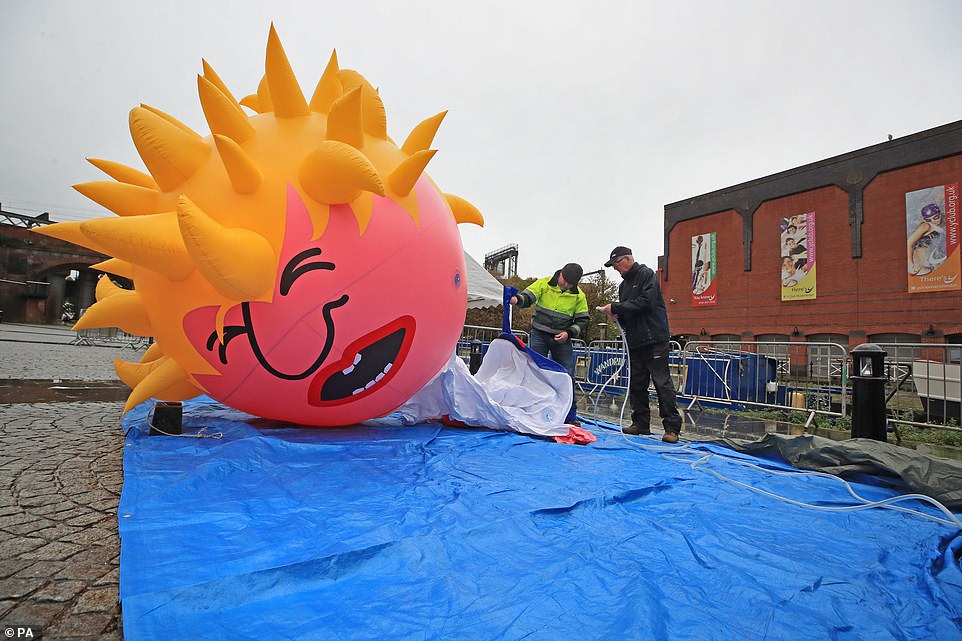 Many waved European flags or wore blue berets with yellow stars on.

Speakers included human rights campaigner Peter Tatchell, who told the crowd: ‘The time for party self-interest is over. Everybody from every party must unite to stop a no-deal Brexit.’

The austerity demo is campaigning against the policy they view as ‘the most destructive force in Britain today’.

The People’s Assembly is also holding a series of events in Piccadilly Gardens.

Talks will take place on a variety of issues – including the climate crisis, the NHS, welfare and housing.

Chief Superintendent Wasim Chaudhry, of Greater Manchester Police, said tens of thousands are expected to attend the two rallies, as in past years when the Tories have held their conference in Manchester.

In Salford this morning, a sickening banner threatening to ‘level the playing field’ after ‘130,000 deaths’ under Conservative rule was unveiled on a bridge, with effigies hanging below it.

A photograph of the banner and the two hanging dummies was tweeted about by Manchester Momentum who said: ‘Good morning Conservatives, welcome to Manchester.’

In scenes reminiscent of the Channel 4 adaptation of Margaret Atwood’s The Handmaid’s Tale, the message says: ‘130,000 killed under Tory rule, time to level the playing field.’ 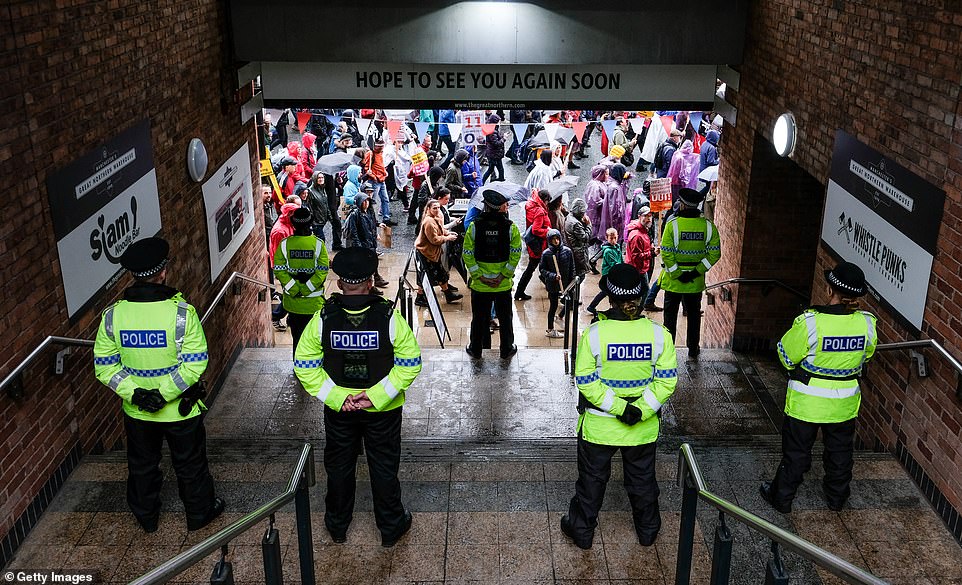 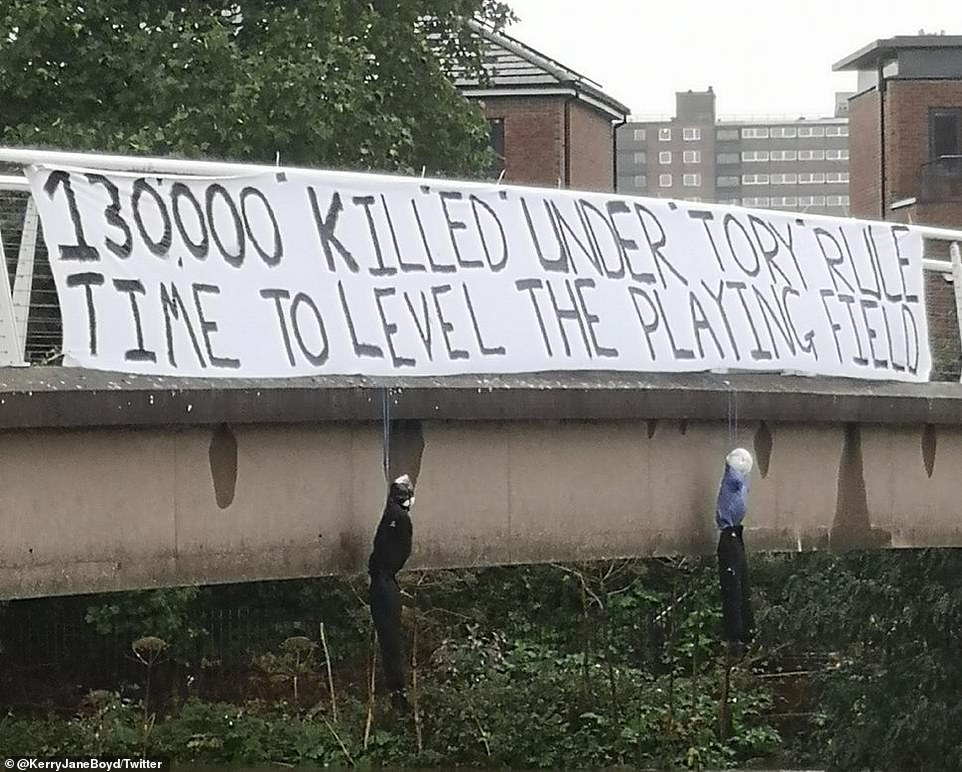 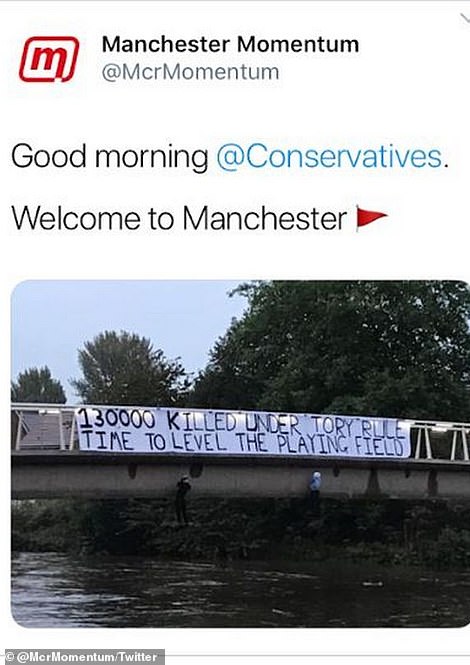 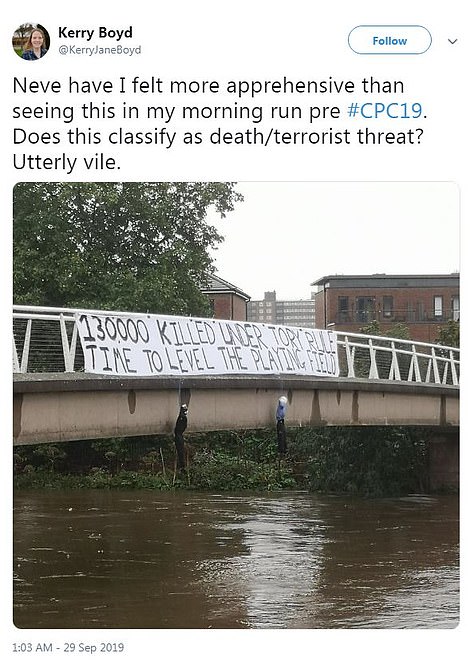 Manchester Momentum tweeted out an image of the banner and effigies and said: ‘Good morning Conservatives, welcome to Manchester’. The stunt has been widely condemned as ‘vile’

The figure refers to an estimate by a think tank which claims the Conservative policy of austerity resulted in the deaths of 130,000 people, but this is disputed.

Neither Momentum nor anyone else has yet claimed responsibility for the sick stunt.

A Conservative councillor was also caught on camera today after he snatched two EU flags from Remain protesters outside the party conference in Manchester.

Sam Smith, 22, who is Britain’s youngest Tory branch chairman, stole and ‘destroyed’ the flags from anti-Brexit demonstrators outside the Midland hotel.

In the video, spotted by the Gedling Eye, a protester named Elspeth walks behind the councillor as he strolls away with an EU flag in his hand.

When he turns, the camerawoman says ‘got you’, to which Mr Smith replies: ‘No, no, no we’ve got you actually. We don’t want the EU’. 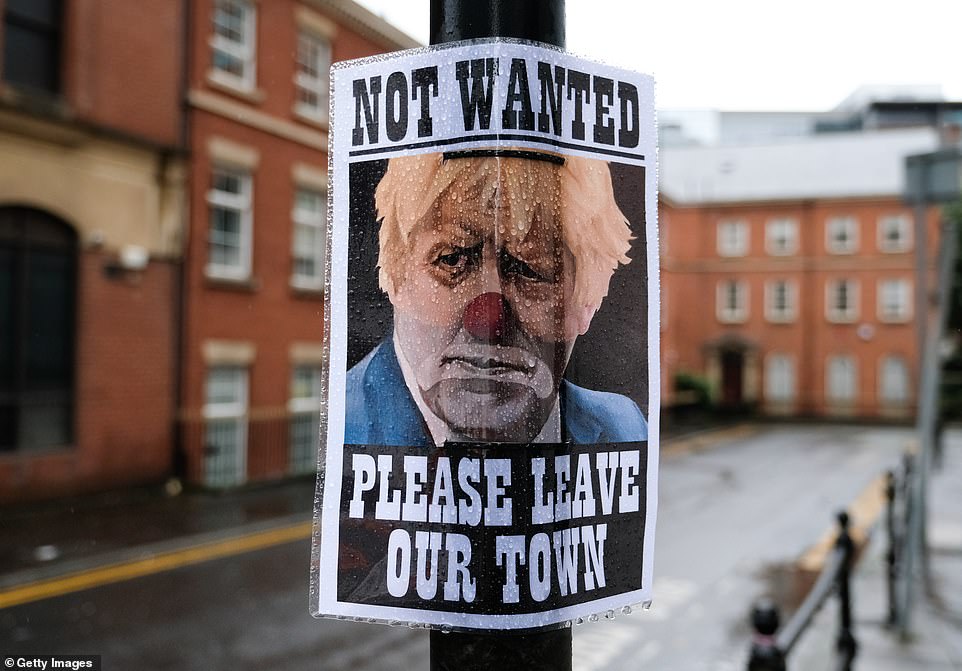 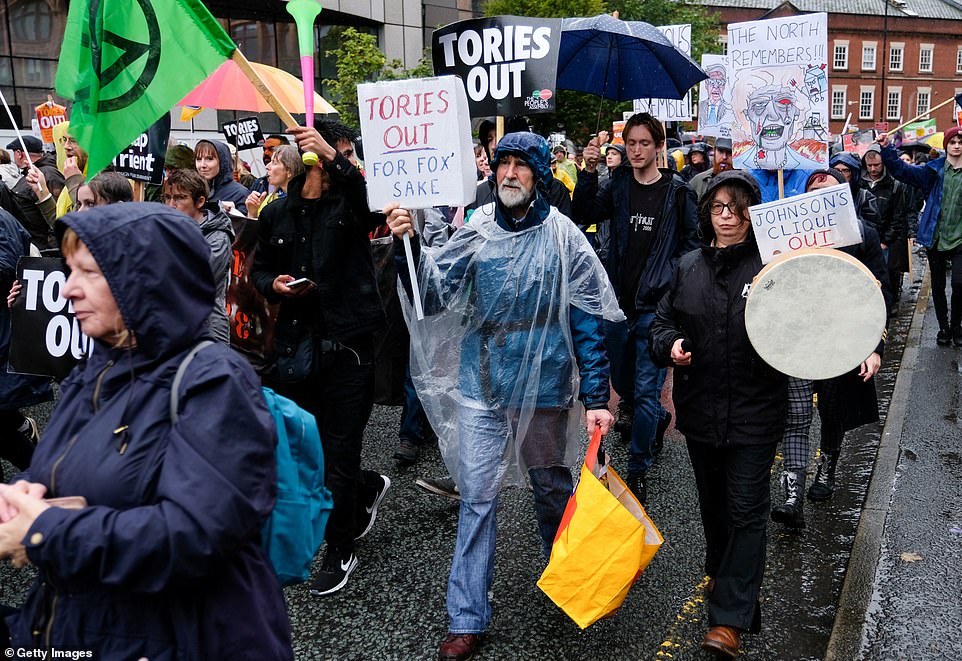 One campaigner dressed in a poncho holds a sign which seems to hit out against fox hunting. Meanwhile, another activist waves an Extinction Rebellion flag 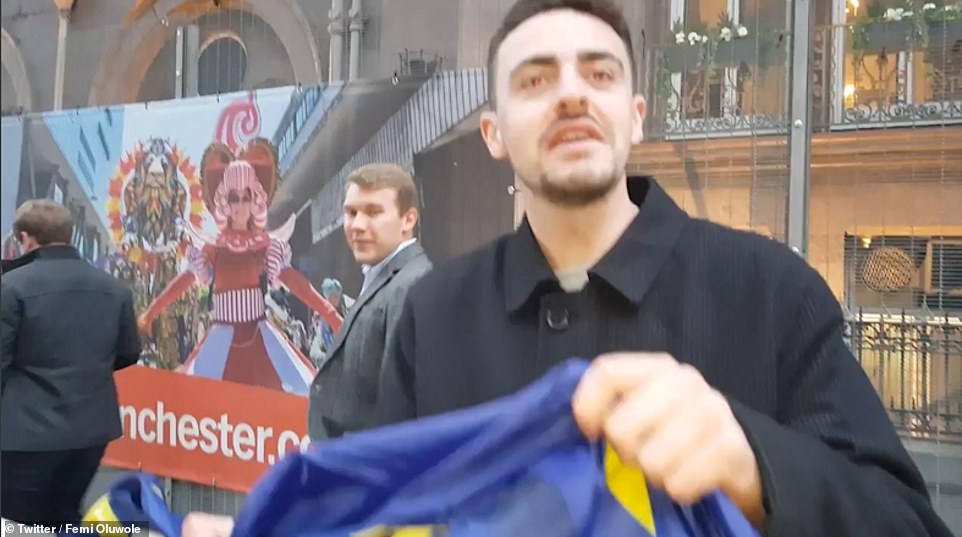 Sam Smith, 22, who is Britain’s youngest Tory branch chairman, stole and ‘destroyed’ the flags from anti-Brexit demonstrators outside the Midland hotel in Manchester