Rebel Remainers are trying to force Boris Johnson to go cap in hand to EU leaders in Brussels for a Brexit delay even earlier than under current plans to entrap the Prime Minister.

Under an extraordinary backbench law passed last month he currently has to ask to extend the Article 50 departure process at an October 19 summit if he and the EU have not hammered out a Brexit deal by then.

But MPs arriving back at Parliament today after the PM’s prorogation humiliation have begun looking at ways of bringing forward that deadline and toughen up the legislation amid fears that he could break the law by ignoring it.

Lib Dem leader Jo Swinson said today that the UK could not wait until October 19, when the Benn Act – named after creator Hilary Benn –  should compel Mr Johnson to ask for a three-month extension.

Such a request would go against his mantra since becoming leader that Brexit would happen on October 31 ‘do or die’ and reports have suggested he might refuse to do it – sparking a huge legal crisis.

Ms Swinson said that there were fears that legal efforts to compel him to act might take longer than the 12 days between the European Council summit and Brexit day on Halloween.

In a jibe at the Prime Minister Ms Swinson said: ‘We simply cannot afford to wait until the 19th of October to see whether or not the prime minister will refuse to obey the law again’ 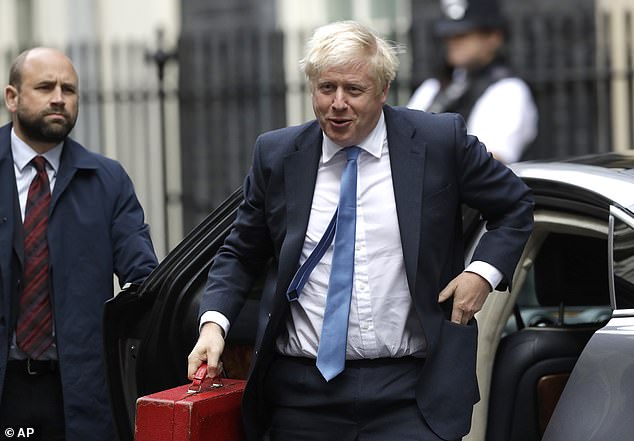 The PM (pictured in Downing Street today) made a red-eye dash back from New York, where he met Donald Trump and addressed the UN General Assembly

Mr Johnson arrived back in Downing Street today ahead of a statement to MPs in the Commons due this afternoon after John Bercow threw open the doors of the legislature this morning.

He made a red-eye dash back from New York, where he met Donald Trump and addressed the UN General Assembly.

He faces a difficult few weeks as he tries to wrestle power over Brexit back from MPs determined to block his room to manoeuvre.

Ideas floating about include using emergency debate powers to seize control of the order paper, or use a ‘humble address’ to force the Government to release more Brexit documents.

Some MPs are reportedly planning to try to force the government to publish its prorogation legal advice from Attorney General Geoffrey Cox in full.

Supporters of a so-called ‘People’s Vote’ will be considering whether they could use the shifting balance of power in Westminster to secure their goal.

They could also make moves to find Mr Johnson in contempt of Parliament.

Action could be taken against Mr Johnson over his illegal advice to the Queen, with the possibility of contempt proceedings. Theoretically this could include stripping him of his salary – or even imprisoning him at Parliament, although the latter seems very unlikely.

It has also been suggested that MPs could put Theresa May’s deal back on the table, but try to attach a ‘confirmatory vote’ or second referendum.

They could also possibly try to dictate the negotiating strategy of the government, by passing laws instructing them to seek certain terms. 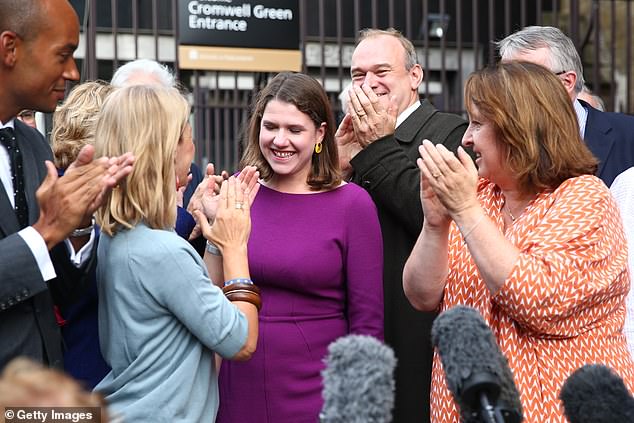 Ms Swinson said: ‘Our country is in a moment of great peril and it is hugely important that we not risk accidentally crashing out of the European Union’

Ms Swinson argued that a 12-day buffer between the Benn Law deadline and October 31 was not enough to safeguard against no deal.

If Mr Johnson refuses to comply with the law and request an extension by October 19, the courts could force him to act – but Ms Swinson warned that such a process ‘takes time and there are risks attached to it’.

She ruled out agreeing to back a vote of no confidence until no-deal has been taken off the table.

‘Our country is in a moment of great peril and it is hugely important that we not risk accidentally crashing out of the European Union, and that is the risk of an early vote of no confidence,’ she said.

‘That is why we are saying we should explore all options to bring forward that guarantee that we can take No Deal off the table because then we can get rid of this Prime Minister who is unfit for office.

‘We saw in September the House of Commons take control of the order paper to pass a piece of legislation and that’s the type of way forward that may well enable us to take the threat of a no-deal Brexit off the table earlier than October 19.’