Remainers may have just three days to organise a plot against Boris Johnson after the PM put a huge dent in their hopes of preventing No Deal by announcing a five-week suspension of Parliament.

Rebel and opposition MPs want to make their move next week when the Commons returns for a very brief sitting before it is prorogued in mid-September.

A cross-party group led by Jeremy Corbyn has agreed to work together to delay Brexit, although there are still deep divisions among Remainers.

Meanwhile Tory rebel Dominic Grieve has said he would back a no-confidence vote against Mr Johnson, which Mr Corbyn could table.

Parliament returns on Tuesday, but may only have three days of debate next week as MPs generally do not sit on Fridays. The prorogation could then take place as early as the following Monday.

Today furious opponents of  Brexit urged their fellow Remainers to act fast, while the PM insisted the scheduling of a Queen’s Speech was a regular procedural step. 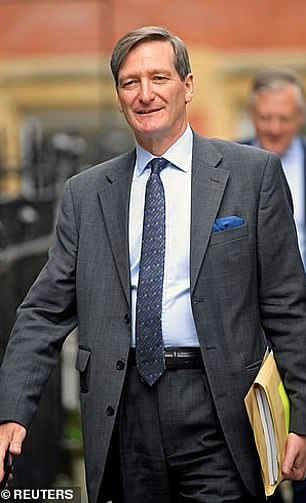 Remainer fury: Philip Hammond (left) accused Boris Johnson of a ‘constitutional outrage’ while Dominic Grieve (right) has said he would back a no-confidence vote against Mr Johnson

Scotland’s First Minister Nicola Sturgeon called on Ruth Davidson, the pro-Remain Tory leader in Scotland, to defy her party and back the cross-party effort to stop No Deal.

‘Unless MPs come together to stop him next week, today will go down in history as a dark one indeed for UK democracy,’ she said.

‘Given her past statements opposing a No Deal Brexit, it would be good to have confirmation from Ruth Davidson today that all Scots Tory MPs will back the cross party effort next week to stop it – and that they will also oppose Boris Johnson’s attempt to shut down Parliament.’

Alastair Campbell, a former aide to Tony Blair who was thrown out of the Labour Party after backing the Lib Dems earlier this year, also called on rebel Tory MPs to back the cross-party plans.

Mr Campbell said: ‘Hopefully Tory MPs who thought they could ‘wait and see’ can now see plainly that they need to get behind the legislative plan discussed by Opposition leaders yesterday. Fast.

‘Or play along with Johnson destroying Parliamentary democracy while pretending to ‘take back control’.’

Former Tory MP Nick Boles, who quit the party and became an Independent earlier this year, said: ‘The government’s plan to prorogue Parliament until 14 Oct clarifies the choice for MPs who want to stop a No Deal Brexit.

‘If they don’t support legislative steps next week, there will be no second chance. Hopefully this will stiffen backbones and concentrate minds.’ 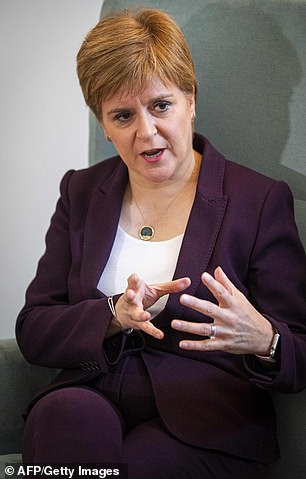 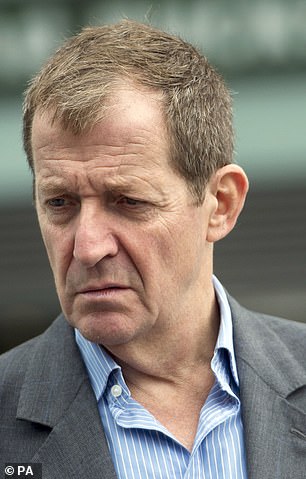 What is the prorogation process?

Prorogation is the end of a Parliamentary session. These typically last around a year, although the current one has been running since June 2017.

Once Parliament is prorogued, it will not sit again until the next State Opening of Parliament, which features the Queen’s Speech.

In centuries gone by, it could sometimes be months or years before Parliament would next meet, but in modern times it is usually a matter of days or weeks.

It is usually uncontroversial and Boris Johnson’s allies argue that today’s move is a standard procedural step.

However, opponents of Mr Johnson accuse him of trying to prevent rebel and opposition MPs from halting a No Deal Brexit.

The Queen started the ball rolling on the prorogation process today, approving a document at Balmoral which orders Parliament to be prorogued no later than Thursday, September 12.

Members of the Privy Council including Jacob Rees-Mogg went to the Scottish estate to carry out the formalities today.

Five people are appointed to a Royal Commission to carry out the Queen’s orders. On the day itself, they will summon MPs into the House of Lords chamber for the prorogation ceremony.

The Queen’s orders are read out, and any Bills that are yet to receive Royal Assent are finally rubber-stamped and become law.

In a quirky Parliamentary tradition, the Clerk of the Parliament announces the Royal Assent in Norman French: ‘La Reyne le veult’, or ‘The Queen wills it’.

A prorogation speech is read out on behalf of the Queen. Like the Queen’s Speech, it is written by the Government and reviews its legislative programme over the last year.

Parliamentary business is then over for the session and any Bills which have not been passed will usually have to be started afresh in the next session.

Jeremy Corbyn has put his hopes of a no-confidence vote on the back burner for the time being but Tory rebel Dominic Grieve said today that he would back one if necessary.

‘I would wish if at all possible to avoid bringing down a Conservative government on a vote of no confidence but if that is what is ultimately took I would be willing to do it.

‘I think there are a number of colleagues who have said exactly the same thing.’

In a separate Remainer plot in Scotland, a cross-party group of more than 70 MPs and peers are considering seeking an interim interdict in the Court of Session to block prorogation of Parliament.

Scottish Labour MP Ian Murray said that Boris Johnson’s plan to suspend Parliament is ‘an assault on our democracy’.

‘This is the people’s parliament and the people deserve to have their representatives in Parliament during this vital period,’ said Mr Murray.

‘This is the opposite of taking back control. Legal action to prevent the Prime Minister suspending Parliament has already been fast-tracked through the courts and the legal team will now consider the appropriate next steps, including seeking interim orders.’

Number 10 insists it is scheduling a Queen’s Speech as Governments habitually do, saying the Brexit process is irrelevant.

Meanwhile Anna Soubry, another Tory defector, urged her supporters to lobby their MPs.

‘Our democracy is under threat from a ruthless PM elected by less than 100K Con members. Email your MP now & demand Parliament sits,’ she said on Twitter.

After talks with other parties yesterday, Mr Corbyn said he would pursue legislation to block No Deal, rather than calling a vote of no confidence.

To pass such legislation, opposition MPs would have to take control of Commons business, which is usually tightly controlled by the Government.

That is an unusual step, but it has happened before and Parliamentary rules have proven flexible in recent months. 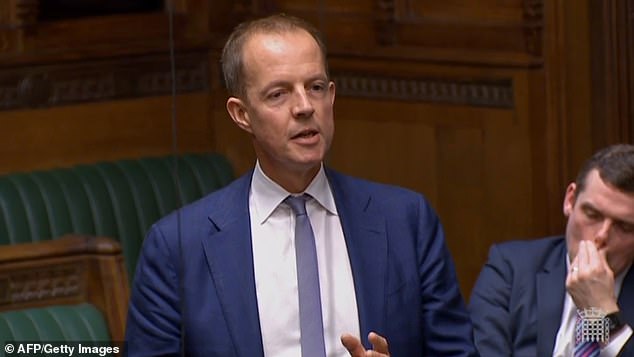 Former Tory MP Nick Boles, who quit the party and became an Independent earlier this year, said: ‘The government’s plan to prorogue Parliament until 14 Oct clarifies the choice for MPs who want to stop a No Deal Brexit’ 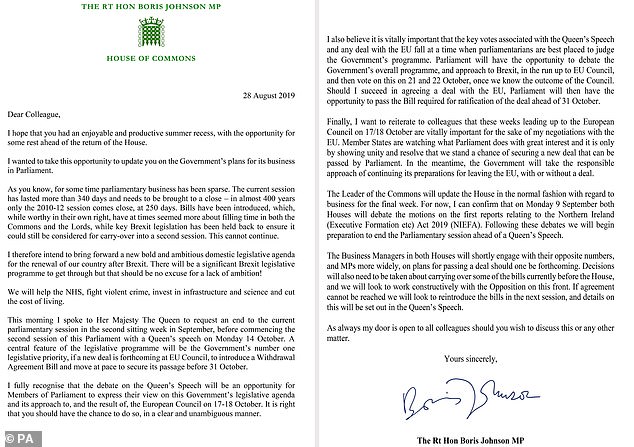 In April, rebel MPs succeeded in passing the so-called Cooper-Letwin Bill to force Theresa May to seek an extension. EU leaders granted a delay until October 31.

The Commons has also voted in general terms to express its opposition to No Deal, and could do so again. But such votes have no binding legal force.

‘I have had no contact from the Government, but if the reports that it is seeking to prorogue Parliament are confirmed, this move represents a constitutional outrage,’ Mr Bercow said.

‘However it is dressed up, it is blindingly obvious that the purpose of prorogation now would be to stop Parliament debating Brexit and performing its duty in shaping a course for the country.

‘At this time, one of the most challenging periods in our nation’s history, it is vital that our elected Parliament has its say. After all, we live in a parliamentary democracy.

‘Shutting down Parliament would be an offence against the democratic process and the rights of Parliamentarians as the people’s elected representatives.’ 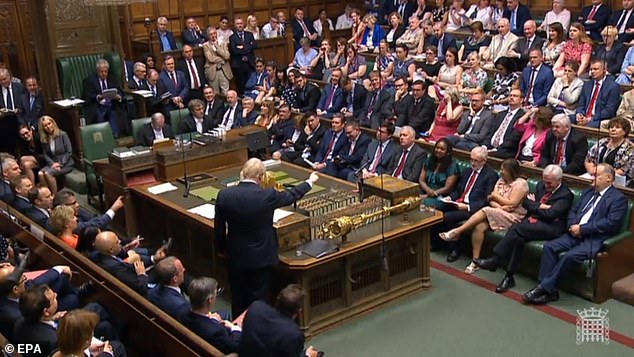 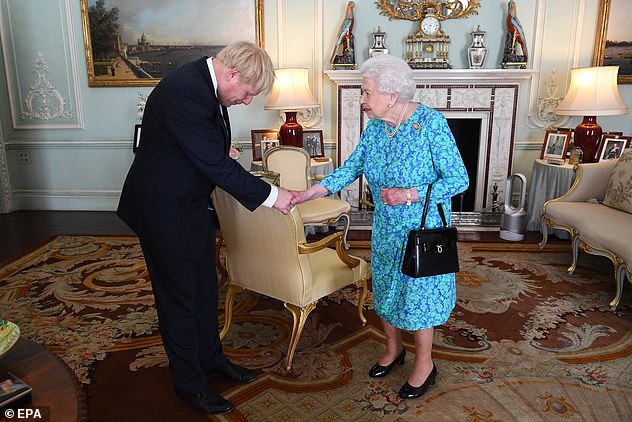