Scientists in Australia have uncovered the first archaeological evidence of insects being used as a food source by ancient Australian Aboriginal groups.

Particles on a grindstone discovered in the foothills of the Australian Alps were determined to be from a Bogong moth, which migrates to the area every summer.

The tool, small to be carried around by its owner, is estimated to be about 2,000 years old.

The discovery is the earliest evidence of insect food on a stone artifact anywhere on Earth, and offers a rare insight into the food culture of ancient Aboriginal people in Australia.

A grindstone discovered in a cave in Southeastern Australia is the first archaeological evidence that ancient Aboriginal groups harvested Bogong moths as far back as 2,000 years ago

According to oral tradition, for a millennia native Australians climbed the Alps to gather bogong moths, which migrate to the region each summer.

They would use sticks to scrape the insects, then in their dormant phase, off cave walls into their nets and plates.

The harvest was something of a festival, with members of different clans reconnecting and feasting together.

High in fat and protein, the months make for a great food source but there was little evidence of this harvest dating further back than the early 19th century. 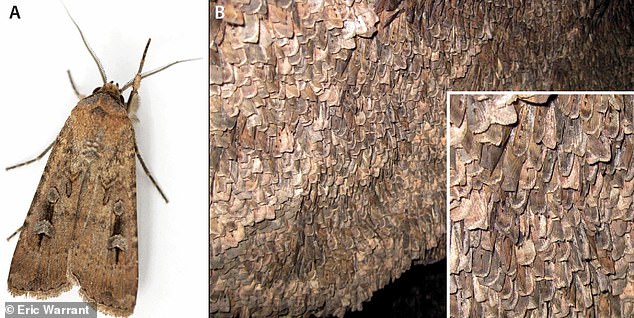 According to oral tradition, native Australians climbed the mountains to harvest Bogong moths from cave walls.  They would use sticks to scrape the insects, then in their dormant phase, into their nets

In 2019 researchers from Monash University uncovered a small grindstone during an excavation of Cloggs Cave, a rockshelter located in the foothills of eastern Victoria’s Australian Alps.

Analysis of the tool, estimated to be 2,000 years old, revealed damaged and partly carbonized Bogong moth wings, collagen and other structures. 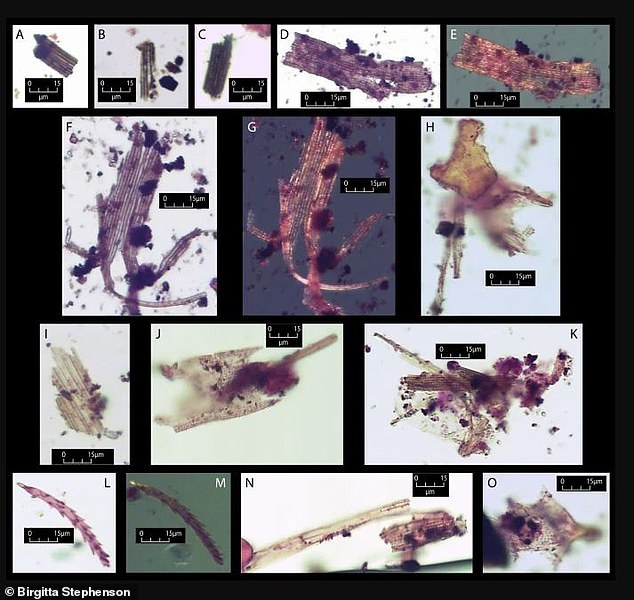 Microscopic analysis of the grindstone revealed Bogong moth collagen, damaged and partly carbonized wings and other structures. The moths were sometimes cooked on an open fire and eaten immediately, or ground into a ‘moth cake’ that could be preserved

Not only was it confirmation of the moth harvest, it’s the earliest example of insect food on a stone artifact anywhere on earth.

Located in southeastern Australia on lands belonging to the Krauatungalung clan of the Gunaikurnai peoples, Cloggs Cave is a fertile repository of Aboriginal artifacts.

The cave was first excavated in the 1970s, with evidence suggesting it was probably first occupied around 17,000 years ago as a seasonal hunting shelter. 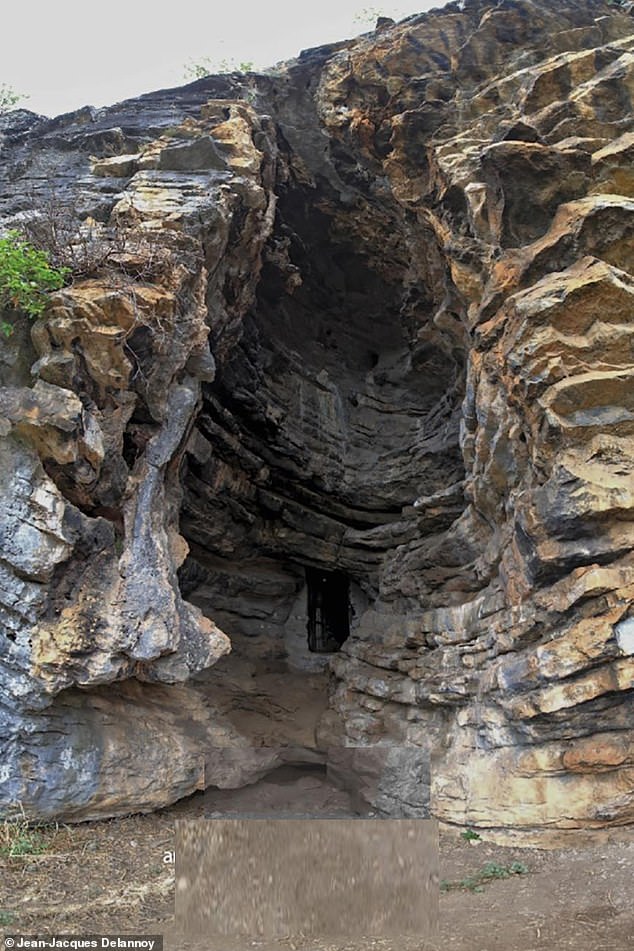 The artifact was discovered in Cloggs Cave, a rockshelter in the foothills of the Australian Alps that was first inhabited by Aboriginal groups some 17,000 years ago 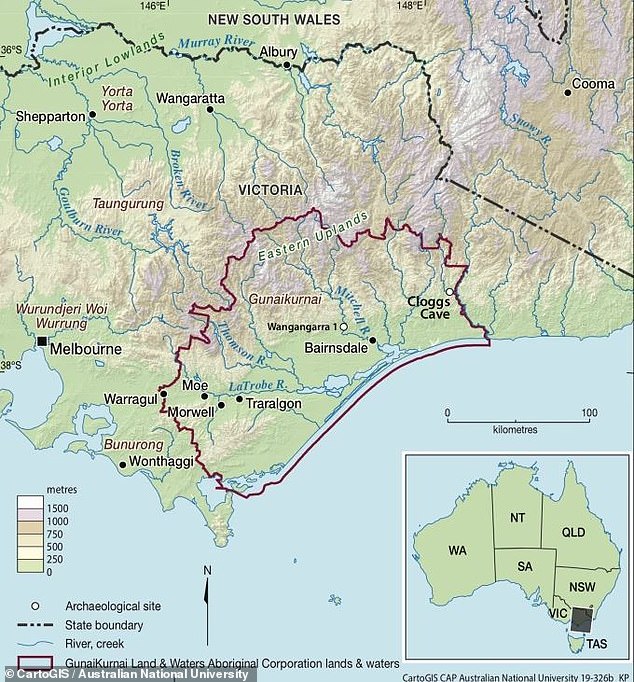 Every summer, Bogong moths migrate hundreds of miles from southern Queensland, western New South Wales and other areas to the mountain caves of southeast Australia

The moths were prepared a number of different ways, including being cooked on an open fire and gobbled up.

They could also be ground into a cake that could be smoked and preserved for later.

British settlers in the 1830s wrote about Aboriginal groups harvesting the moths, and clans in the area have oral histories of their ancestors eating them.

But there was never any archaeological evidence the practice was an ancient tradition and, within a few decades of colonization, the harvest tradition was abandoned.

‘A lack of archaeological studies of insect food remains has resulted in a downplay or omission of the use of insects from archaeological narratives and deep-time community histories,’ said archaeologist Bruno David of the Monash Indigenous Studies Center.

‘Food is an expression of culture: think of snails and frogs’ legs and we think of French culture, we associate spaghetti with Italy,’ added David, lead author of a study published in the journal Scientific Reports. 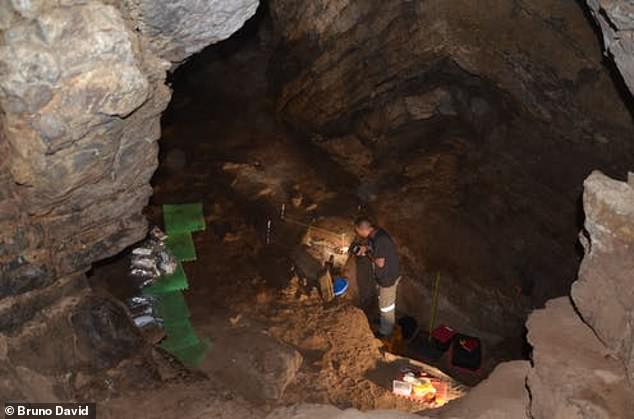 Archaeologists at Cloggs Cave, first excavated in the 1970s. Though Bogong moths once blanketed caves like this one, their numbers have plummeted in recent years

‘The absence of an iconic Aboriginal food from the archaeological record is tantamount to the silencing of Aboriginal food cultures. Now we have a new way of bringing it back into the story.’

The insect remains were between 1,600 and 2,100 years old, indicating Bogong moths have been harvested by up to 65 generations of Aboriginal families.

‘Historical records are witness to our people going to the mountains for the Bogong moths but this project tells us that it also happened in the deeper past,’ Mullett said.

‘Because our people no longer travel to the mountains for Bogong moth festivals, the oral histories aren’t shared anymore, it’s a lost tradition.’

The insects are said to have a nutty flavor, similar to almonds or peanut butter, and are often enjoyed as barbecue.

‘The world has become a different place, but for 2,000 years this grindstone has been sitting idle with a story to tell,’ Mullett said.

‘A single artifact has sparked the rebirth of knowledge that helps to tell the story of the GunaiKurnai people.’

But the discovery comes as the Bogong moth population is plummeting.

In summers past, billions of the bugs have taken refuge in the areas but, for the past half-decade, some caves haven’t had a single flutter. 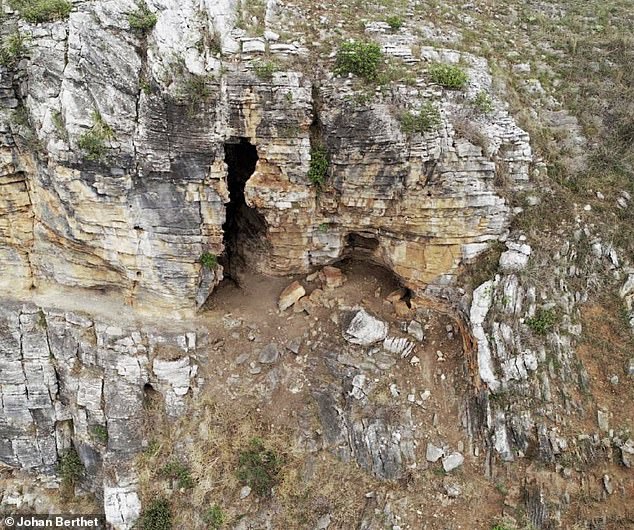 In years past, billions of Bogong moths have taken refuge in the Australian Alps but, for the past half-decade, some caves haven’t had a single flutter

‘We’re talking about caves that normally would have tens of millions of moths in each, easily,’ Swedish entomologist Eric Warrant told the Australian Broadcasting gCompany in 2019.

Bogong moths used to migrate to places like Mount Kosciuszko from breeding grounds more than a thousand miles aways, but droughts have decimated their numbers in recent years, Warrant said.

‘Normally there is at least enough rain for the vegetation to be able to grow sufficiently to feed the caterpillars, but that hasn’t been the case this year or last year,’ he said.

‘It’s a reflection of climate change and the way things are in the world at the moment. It’s confronting to see this to be honest.’

It’s not clear how serious the problem, is as little long-term research has been done on the size of the Bogong moth population.

They are a major part of the diet of local wildlife, including the mountain pygmy possum, already considered a threatened species.

ARE ABORIGINAL AUSTRALIANS THE OLDEST CONTINUOUS SOCIETY ON EARTH?

The most detailed genetic study of Aboriginal Australians, published in 2016, confirmed that the group is the oldest continuous civilization on the planet.

The civilization dates back more than 50,000 years, according to the paper, which was published alongside two others in Nature.

The research led by an international team claims that around 72,000 years ago, a group of migrants began the journey out of Africa that would ultimately shape the future of humanity.

The researchers found that the ‘overwhelming majority’ of non-African populations stem from a single migration from Africa 72,000 years ago.

Along with this, they found evidence that Aboriginal Australians are descended directly from the first people to inhabit Australia.

And, the DNA revealed traces of DNA which suggest modern humans interbred with an early human species that has not yet been characterized as they migrated through Asia.

The researchers also say there appears to be a mysterious dispersal that occurred in Australia roughly 4,000 years ago.

While these migrants shaped speech and thought, they experienced a ‘ghost-like’ disappearance.