Bali Nine drug mule Renae Lawrence has handed herself into a police station just hours after touching down in Newcastle.

Lawrence, 41, was released and flown to Australia this week after spending 13 years in prison in Indonesia.

She was spotted outside Waratah Police Station in Newcastle, New South Wales on Friday.

Lawrence was allegedly involved in a police chase on the NSW Central Coast on March 26, 2005.

A duty officer was unable to confirm if Lawrence was charged in relation to the alleged pursuit. 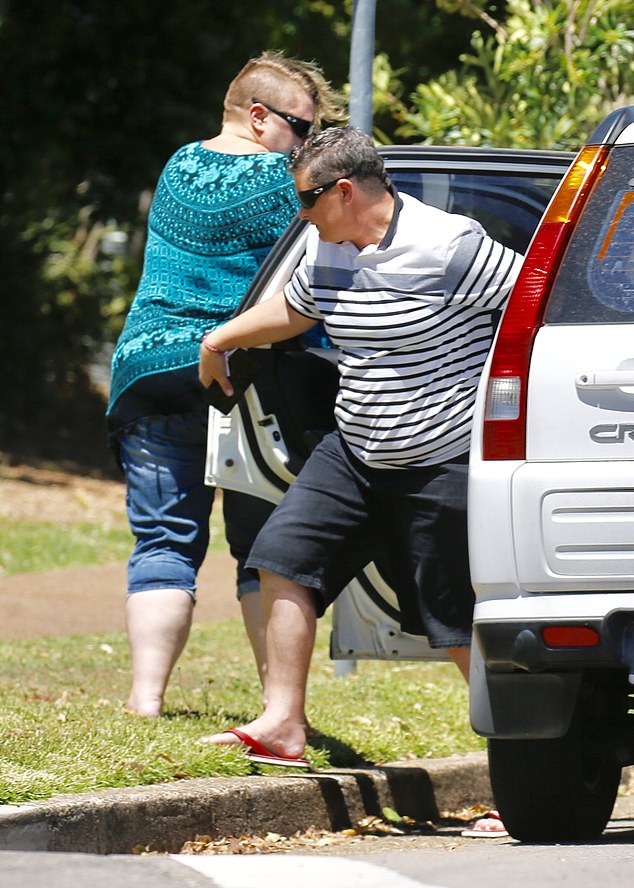 Lawrence, 41, was released and flown to Australia this week after spending 13 years in prison in Indonesia

Lawrence arrived at the police station in a white 4WD from her mother’s house, and lay down in the back seat to make it seem like the car was empty in order to avoid a media frenzy.

Two arrest warrants were issued for her arrest by Gosford Local Court in 2005, but by then she was already in Bali and awaiting trial for drugs charges.

NSW Police commissioner Mick Fuller said Lawrence would be ‘arrested by appointment’ after her return, but that she had ‘paid the price for her sins’.

She is set to be charged with several offences including stealing a motor vehicle, driving without a licence, speeding and failing to comply with police, the Sydney Morning Herald reported.

‘I have to be honest with you, I know she’s sinned, and I think she’s paid a fairly heavy price for that,’ Mr Fuller said. 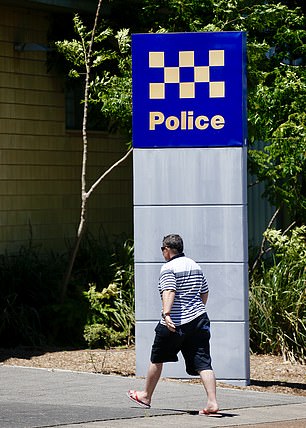 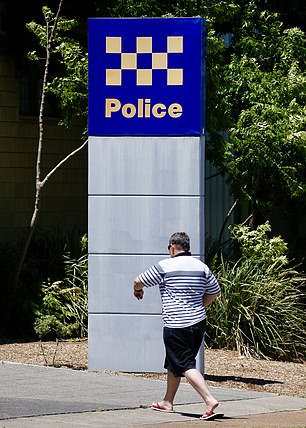 She was spotted outside Waratah Police Station in Newcastle, New South Wales on Friday

‘There are other circumstances where we’d be waiting on the plane and we’d arrest the individual when they got off the plane.

‘Others will judge me and think we should have been waiting at the plane for her to pay a price. I think she paid her price for her sins. 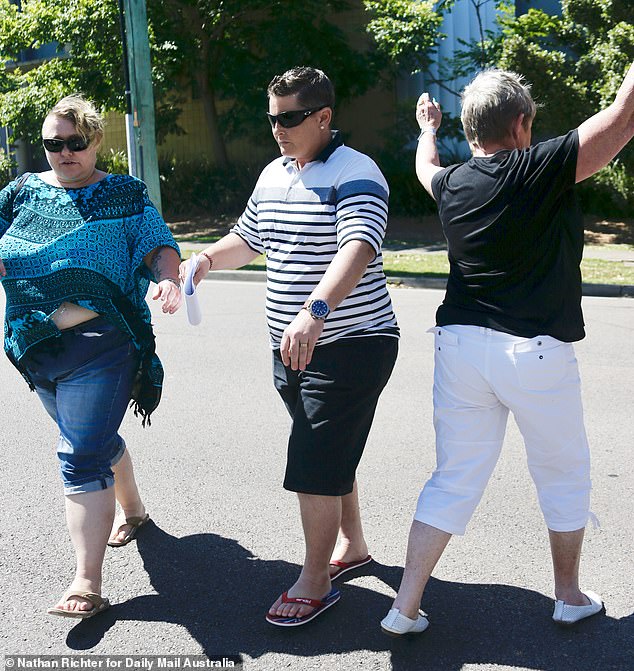 NSW Police commissioner Mick Fuller said Lawrence would be ‘arrested by appointment’ after her return, but that she had ‘paid the price for her sins’ 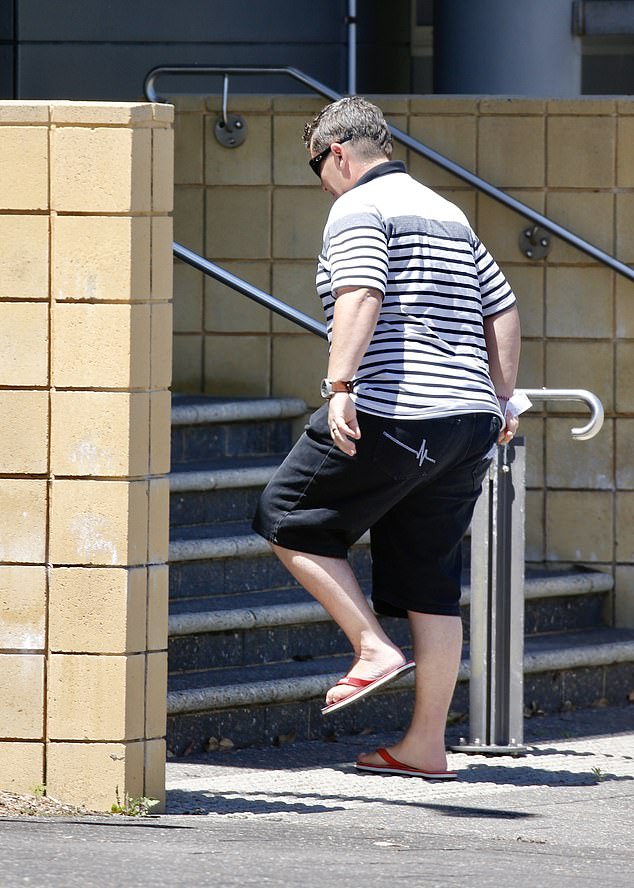 Lawrence was allegedly involved in a police chase on the NSW Central Coast on March 26, 2005

Lawrence had earlier has been spotted running errands with her mother just hours after touching down on Australian soil.

The 41-year-old, who was released this week following 13 years in an Indonesian jail, was seen outside an Aldi supermarket in her home town of Newcastle on Friday morning.

Her mother purchased half a dozen bread rolls from the store before meeting Lawrence outside.

The pair left in a black Honda Civic. 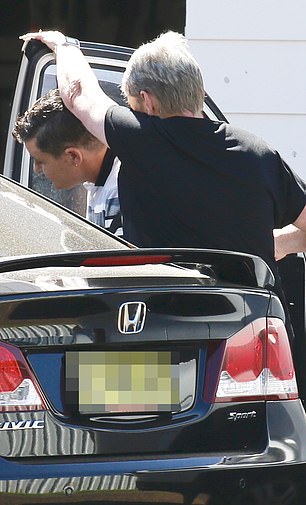 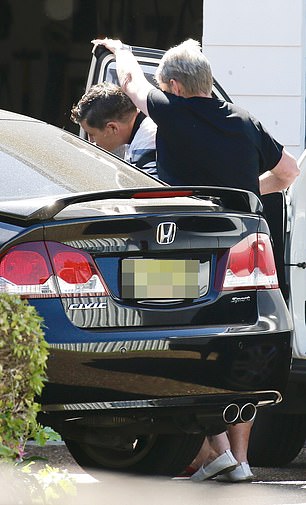 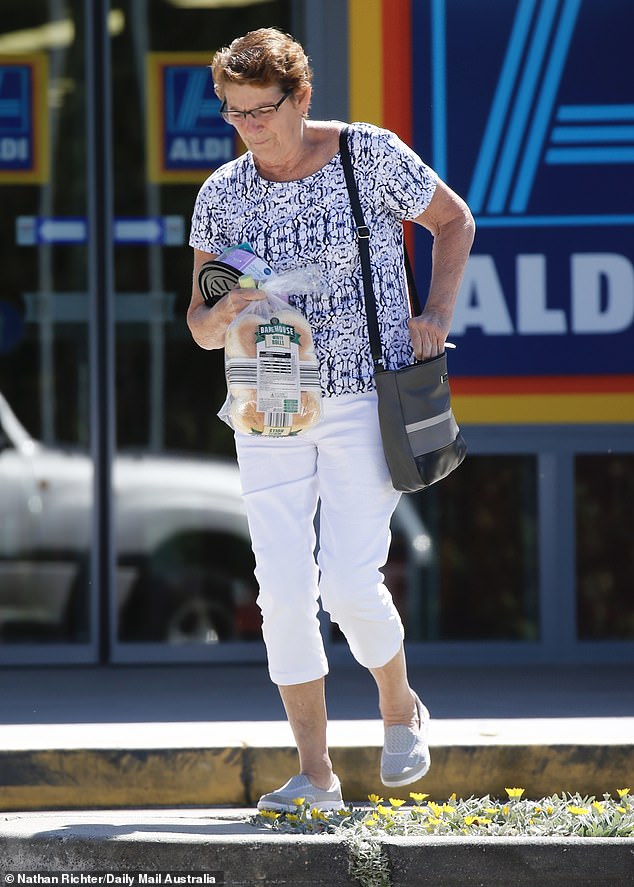 On Thursday, Lawrence was confronted with a media scrum as she arrived in Newcastle her first day of freedom.

Lawrence, 41, who spent over 13 years behind bars in Indonesia for drug smuggling touched down on Australian soil on Thursday morning.

At the arrival gates of Newcastle Airport, Lawrence was met by a media frenzy of reporters shouting questions and cameras flashing. 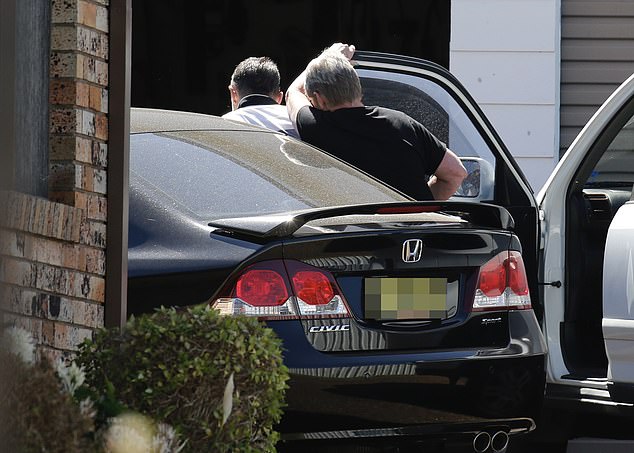 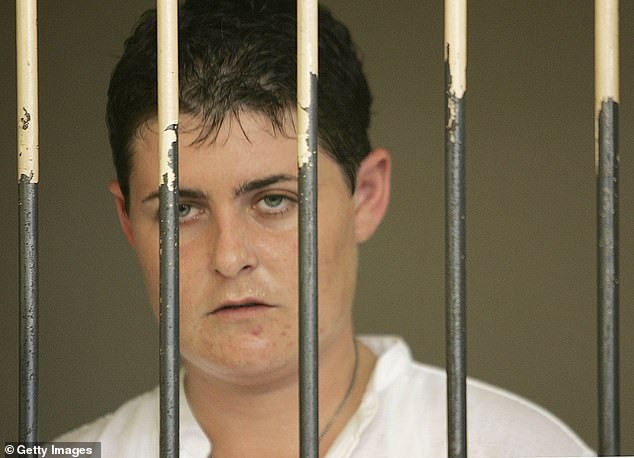 Hanging her head and pushing her arms forward, the former prisoner was forced to make a made dash through the terminal in a bid to escape the media spotlight.

She was chased by unrelenting media crews as she made her way to a vehicle parked outside the airport.

In chaotic scenes captured on camera, a member of the media fell to the floor during the race to interview Lawrence.

The man, who wearing beige pants, rolled on the ground as a trail of people continued to follow the convicted drug smuggler.

She had been given priority boarding and special attention as she made the trip to her hometown Newcastle, New South Wales, with a transfer flight leaving from Brisbane, Queensland.

But nothing could prepare Lawrence for the media storm on arrival.

Lawrence was ushered onto her Virgin Australia flight at Brisbane Airport on Thursday morning, bound for Newcastle, north of Sydney, where she is expected to stay with her mother, Beverley Waterman.

The convicted drug mule was seen with her mobile phone in-hand and appeared to have made a last-minute phone call before boarding her flight home.

Lawrence had earlier sparked speculation she is married after arriving back in Australia wearing a ring on her wedding finger following her release from Bali’s Bangli prison.

She had been issued with a travel document for her travel back to Australia, not a passport. 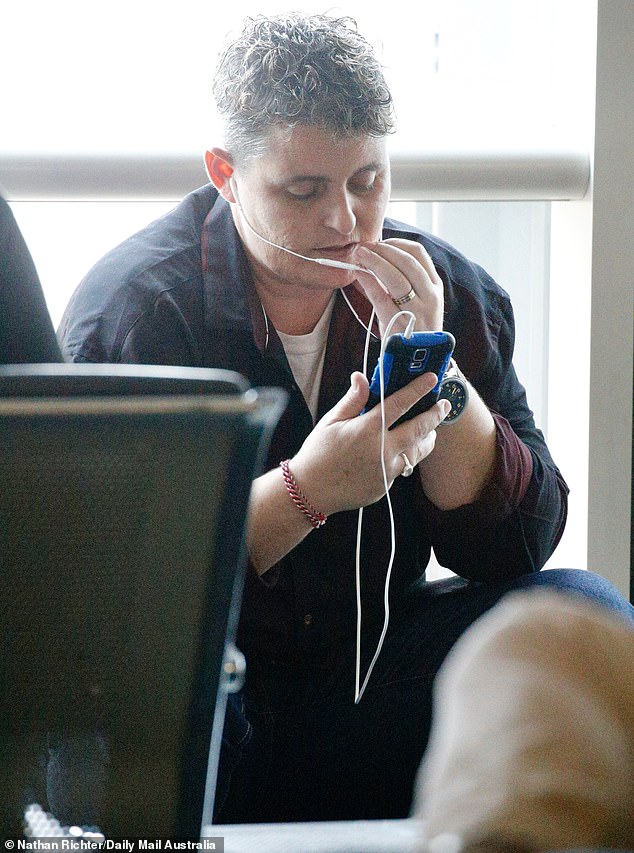 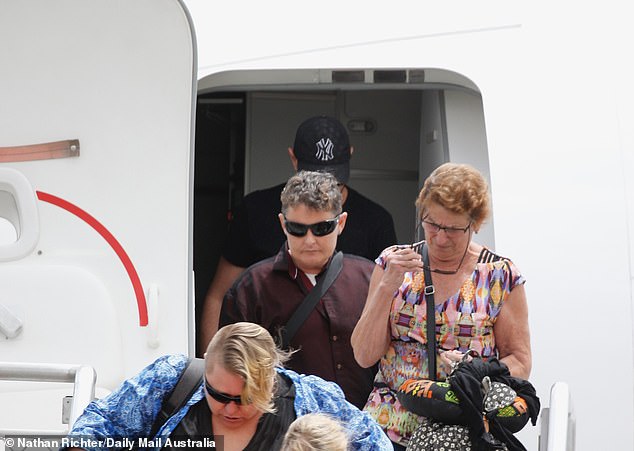 Lawrence stepped off the plane at Newcastle Airport surrounded by members of her family, including her mother 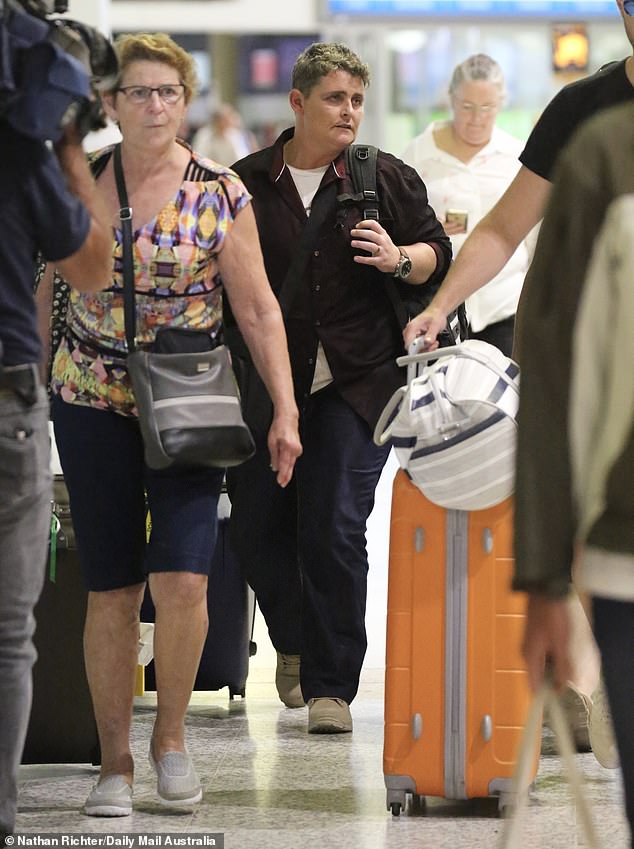 ‘We don’t want to comment. We’ve got nothing to say. Please just leave us,’ Ms Waterman told reporters 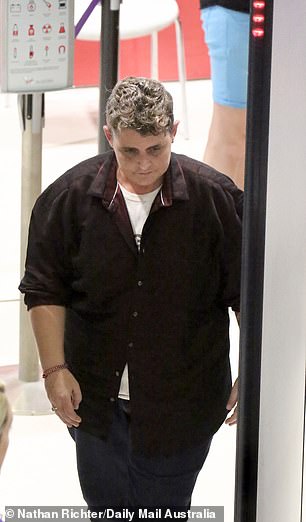 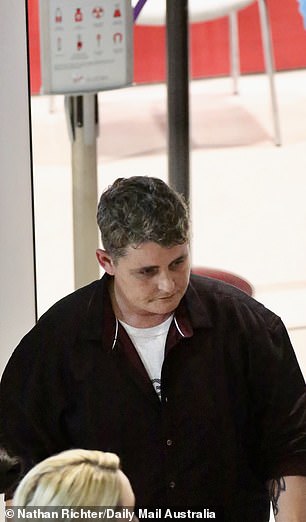 The 41-year-old had left Australia for Bali in 2005, where she was arrested with eight others and convicted of drug smuggling

Lawrence was released at about 5pm on Wednesday evening after officials held a press conference at the prison doors.

Maryoto Sumadi, Justice Ministry chief, spoke in Indonesian before holding up her release papers and saying: ‘She is a free woman’.

Mr Sumadi said Lawrence would be deported and banned from re-entering Indonesia for life.

Where are the other members of Bali Nine?

Andrew Chan, 31, and Myuran Sukumaran, 34, – were executed by firing squad on the Indonesian prison island of Nusa Kambangan on April 29, 2015.

Tan Duc Thanh was initially given life but was then sentenced to death following an appeal. He died of cancer while in jail earlier this year.

Five others are serving life in jail:

Rush’s parents were the ones to tip off the Australian Federal Police stating they hoped it would stop their son from becoming a drug mule.

Following his arrest he was sentenced to life in prison and upon appeal was slapped with the death penalty. A further appeal reverted the decision to life in jail.

Stephens was also sentenced to life after being caught attempting to smuggle drugs into Bali.

He attempted to have his sentence lessened to 10 years in 2011 but it was rejected.

He also met his wife Christine Winarni Puspayanti in 2011 who was visiting the prison as part of a church group.

The pair married in a traditional Indonesian ceremony.

Chen was sentenced to life in prison but was given the death sentence following an appeal.

He appealed again after a full confession which then reinstated his life sentence.

Chen is currently running a silversmith workshop while in jail.

Czugaj is one of the youngest members of the group and is serving life in Madiun, East Java.

The former surfing-made apprentice tradesman hopes to be transferred back to a Bali jail.

Following an appeal and full confession, his sentence was reinstated back to life.