An alleged ‘catfish’ was sent sexual photos and videos from her ex-lover before her suicide, a court has heard – as her agonised family breaks down.

Camila Zeidan, 27, is accused of concocting a fake internet boyfriend for Renae Marsden, 20, for two years before she died by suicide at Sydney’s The Gap in 2013.

Police claim Camila pretended to be ‘Brayden Spiteri’ for almost two years before Renae tried to break off her friendship with her for good.

Camila claims she and Renae invented Brayden so they could still be together, despite others’ disapproval, and today admitted receiving ‘numerous photos and videos of a sexual nature’ while posing as Brayden.

She repeatedly told the court she ‘didn’t remember’ key details of the lead-up to her suicide.

But at end of a long day of giving evidence at the NSW Coroner’s Court, counsel assisting the inquest Sasha Harding told Camila: ‘You are not telling the truth.

Monique Marsden, the 14-year-old sister of Renae Marsden, cries during a press conference outside the NSW Coroner’s Court on Wednesday 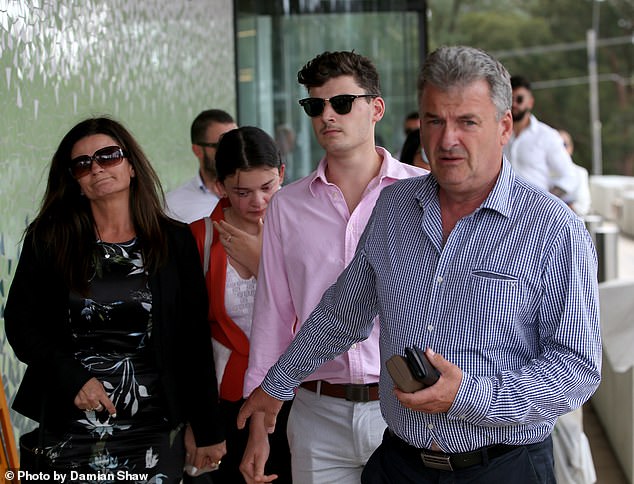 Several members of the family, including Renae’s brother Luke and mother Teresa, were visibly emotional after hearing Camila Zeidan’s testimony. They have been waiting seven years 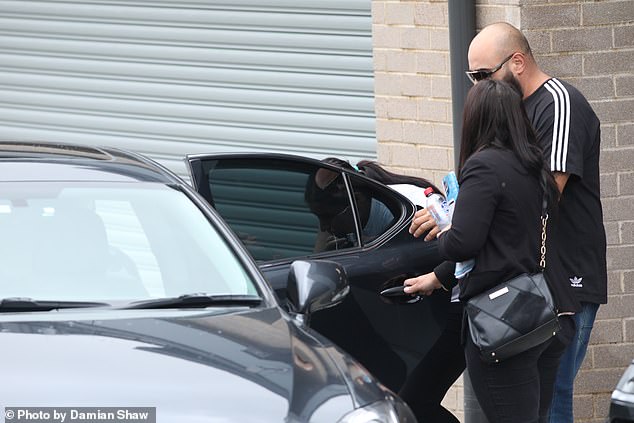 ‘We can hear from the courtroom no one believes you, Camila,’ she said, referring to gasps and crying in the complex.

‘This is an opportunity to come clean and to tell the family what happened on the fifth (of August)’.

The court heard at 8pm on the day Renae died, Camila took Renae’s mother to ‘Brayden’s sister’s house’ – even though Brayden never existed, the court heard.

‘I don’t remember nominating a house, I just remember we drove around,’ Camila said.

Brayden’ had texted Renae’s mother, Teresa, on the day of her death saying: ‘Sort your daughter out, threatening to kill herself’.

Camila said today: ‘I just (sent the Brayden message) to her because I was worried. I didn’t know how serious it was.’

Renae had exchanged a series of messages with Camila and her alter-ego Brayden on the day she died.

The coroner is investigating whether Renae learned she had been catfished before she died.

Counsel assisting the inquest Sasha Harding asked Camila why she did not intervene when the woman she loved was threatening to kill herself.

‘You claim you guys loved each other so much you’re in this fantasy with each other.

Why didn’t you even, as Camila, go to Teresa’s house … intervene, as a friend?’

‘You were in contact with her all day,’ Ms Harding said. ‘You were Brayden, you sent 42 messages to her.’

When Ms Harding pointed out Camila’s family ‘did not get to say goodbye to Renae’, Camila said: ‘Neither did I’.

Camila also admitted her relationship with Renae, as Brayden, was ‘sexual’. 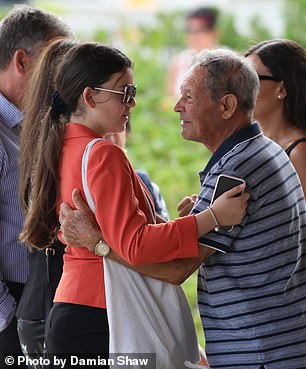 Outside court, Renae’s mother, Teresa said: ‘We’ve been robbed. Seven years we’ve waited for this and we’ve got nothing.’

Renae’s little sister Monique, 14, said: ‘She had a choice to say something. She took my sister away and she’s still denying it.’

Her brother Luke said, tearing up: ‘I look around and see my family in tears. I wouldn’t wish this to my worst nightmare. No family deserves to be broken like this.’

Her father Mark said Wednesday – the day the family expected to get answers – was ‘very harrowing’ and that to some extent, the inquest was worse than losing Renae

‘It’s been a very harrowing day for us.’

‘You have no way to escape’: Court hears of 54 missed calls from Camila to Renae

Earlier, the court heard Camila once left Renae 54 missed calls in the one evening and warned ‘you have no way to escape … I’ll own you’.

Counsel assisting Ms Harding today read out an email Camila wrote to Renae which allegedly shows her ‘obsessive’ attitude to Renae, before she created the identity of Brayden in 2011.

Renae Marsden (left) and Camila (right) went to Mt St Benedict’s College together and were in a relationship at school. Renae moved on after school, but the inquest has heard claims Camila actively tried to break up their relationship – and then catfished her as a man named ‘Brayden’ 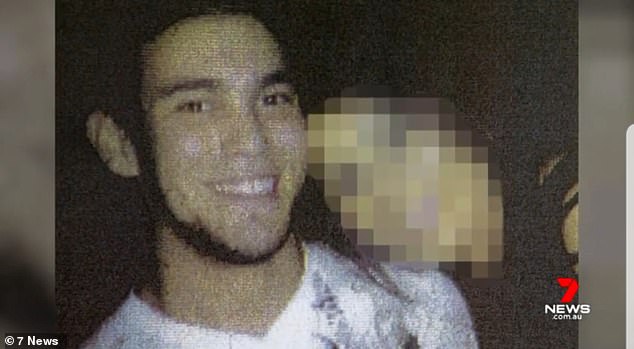 This is a picture of the man Renae believed was Brayden. But it was not. The inquest heard this picture was originally from Camila’s phone

‘I’m going to eat you up in a second baby,’ Camila’s email, sent while they were in a relationship in 2008, continued.

‘I miss you more than anything and I swear babe anyone who ever takes you away from me is going to be sorry.

Renae Marsden in a Facebook message to Camila Zeidan

‘I’ll be a Kung Fu Panda and smash them.

‘I swear to God kid, you’re going no where.

‘LMAO you got no way to escape babe because only I’m in love with you, only I’ll own you and only I’ll have you forever.

‘I don’t think you have any way of this love.

‘Sorry gorgeous but you’ve got to know I’m too in love with you and too obsessed with you’.

When Ms Harding asked Camila about describing her relationship with Renae as ‘obsessive’, she said: ‘I’m talking about back then …Well yeah, I loved her’. 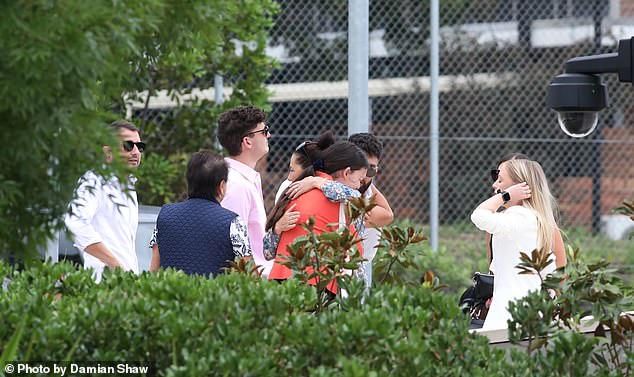 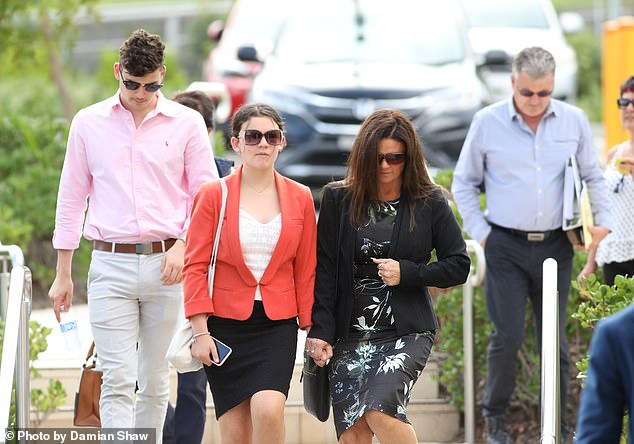 In the years that followed, Ms Zeidan would go on to create Brayden who communicated incessantly with Renae.

She has claimed she made up Brayden jointly with Renae so they could ‘be together’ when no one accepted they could be a couple.

‘You are saying that today but it does not make sense,’ Ms Harding told the court.

‘You wanted Renae to yourself and created Brayden was the perfect opportunity because it meant you could have her all to yourself.’

‘I’m going to kill them both, snap their necks’: Camila’s email about Renae Marsden 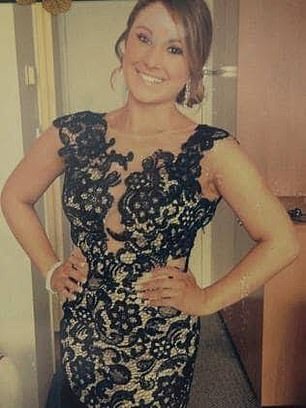 Renae Marsden had a blunt reaction to allegedly receiving 54 missed calls from Camila in the one night: ‘That’s f***ed’

The court heard in another 2008 email to Renae, Camila spoke about two friends who she claimed had made a remark about their relationship.

She described them as ‘little f***en’ drop kick skanks, I f***en’ hate them to death, I want them dead now Renae…

‘I’m going to kill them both, I’ll snap their necks out of place’.

Ms Harding said: ‘That is a very extreme reaction to someone making a comment about your reaction to Renae.’

Camila said: ‘Obviously I cared about her and I loved her ….’

‘It isn’t now, but I don’t know what I was going through at the time,’ Camila said.

The inquest also heard claims Camila actively tried to break up Renae’s relationship with her boyfriend, Angus, who she dated after school.

Facebook messages tendered at the inquest between Camila and Renae in 2011 show the suicide victim describing Camila’s behaviour as ‘f***ed’ and ‘possessive’.

When Camila complained of being ‘second’ place in Renae’s life, Renae replied: ‘I don’t lie, OK. I’m sick to death of saying when I can’t talk.

Camila told Ms Harding: ‘I probably did try and talk to her’

Ms Harding said: ‘Even Renae at this point is saying that it’s f***ed and she herself is describing it as possessive.’

Camila said: ‘It works both ways … I don’t know what was going on at the time.’

In her witness statement, Teresa claimed Camila would lurk at the top of Renae’s driveway in her car when the suicide victim was in a relationship with Angus.

Teresa claimed she followed them during mother-daughter trips to the local Castle Towers shopping centre and that the behaviour was ‘like stalking’. (Camila denied the encounters, claiming she never followed Renae around).

Renae and Camila met up with both their mothers at a shopping centre when Renae got frustrated over the alleged behaviour, Teresa’s statement to the court.

‘Renae had told me we need to put a stop to this. (Camila) has to be told to leave me alone and stop harassing me,’ Teresa said.

Camila was ‘swearing and making a scene’ at the meeting and Teresa claimed that Camila later grabbed Renae by the arm, chased her to the carpark and held her car door open.

Camila told the court: ‘That didn’t happen, so I’m saying, yeah, I never grabbed her arm or held her car open’.

‘You’re almost hunting her down. You turn up in places unexpectedly.

When Camila claimed I never followed her or grabbed her’, Ms Harding said: ‘You didn’t physically – but you’re certainly following her on the phone.

Camila is expected to give evidence again on Thursday.