Over the past several weeks, she’s been busy on the publicity trail, as she promotes her new critically lauded Judy Garland biopic, Judy.

And Renee Zellweger, 50, showed no signs of slowing down on Monday night, when she stepped out in head-turning style for the film’s European premiere in London.

The Oscar-winning actress looked sensational as she arrived on the Curzon Mayfair’s red carpet in a pink off-shoulder Emilia Wickstead gown with long sleeves.

Stepping out in style: Renee Zellweger was the centre of attention when she attended the European premiere of Judy, held at London’s Curzon Mayfair on Monday night

Standing tall in a pair of white heels, the Chicago star wore her golden tresses in a wavy relaxed bun, while she sported a flattering palette of makeup.

And as the inclement weather darkened the English capital’s skies and dampened its streets, Texas native Renee took shelter on a large rainbow umbrella.

The screen star turned the umbrella into something of a fashion accessory, as she struck a series of captivating poses for photographers gathered at the event. 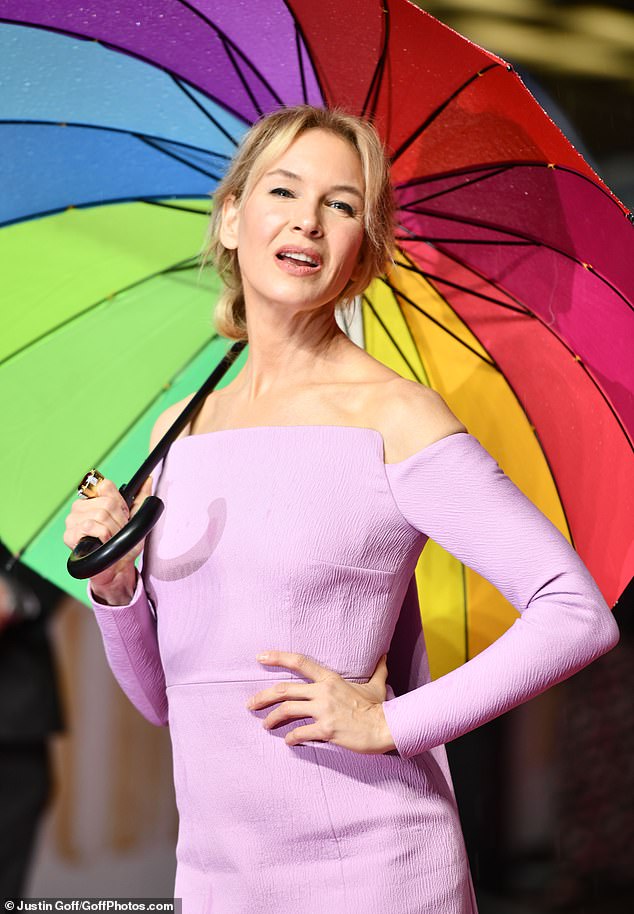 Sensational: The Oscar-winning actress looked sensational as she arrived on the red carpet in a form-fitting pink off-shoulder gown with long sleeves

Somewhere under the rainbow: As the inclement weather darkened the English capital’s skies and dampened its streets, Texas native Renee took shelter on a large rainbow umbrella 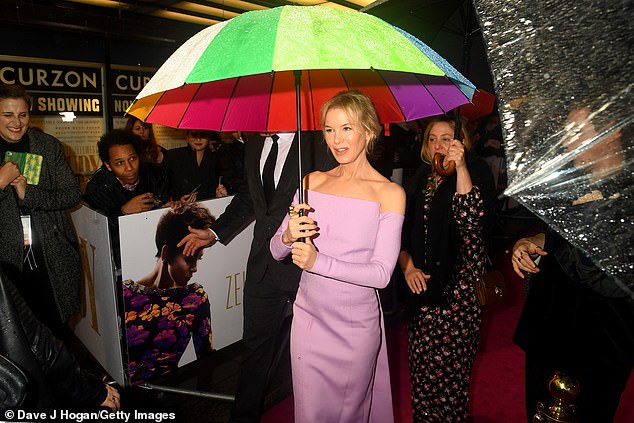 Fan favourite: Fans appeared delighted as they caught a glimpse of the screen star striding by

Tress-ed to impress: Standing tall in a pair of white heels, the Chicago star wore her golden tresses in a wavy relaxed bun, while she sported a flattering palette of makeup 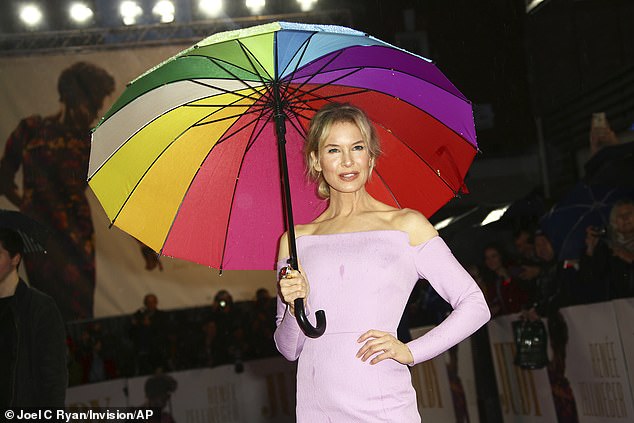 Colourful accessory: She turned the umbrella into something of a fashion accessory, as she struck a series of captivating poses for photographers gathered at the event 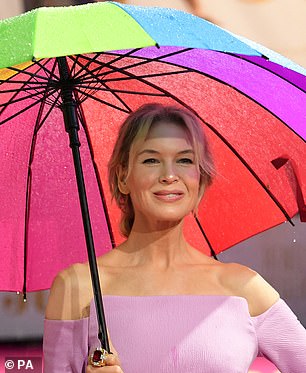 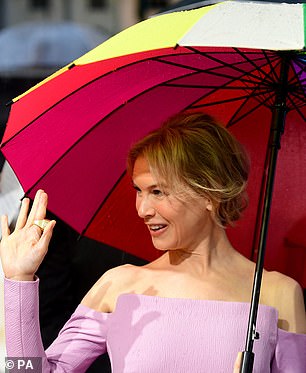 On the promotional trail: Over the past several weeks, she’s been busy on the publicity trail, as she promotes her new critically lauded Judy Garland biopic 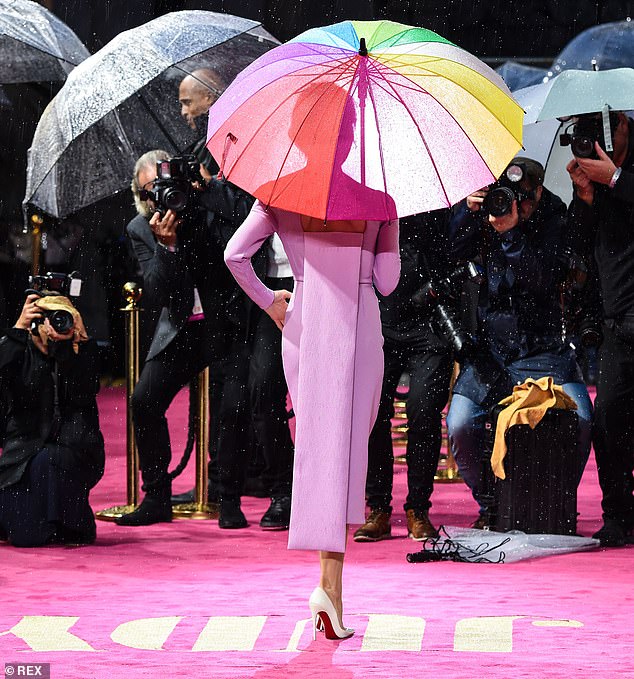 Getting her best angle: The star posed patiently for photographers as she walked the carpet 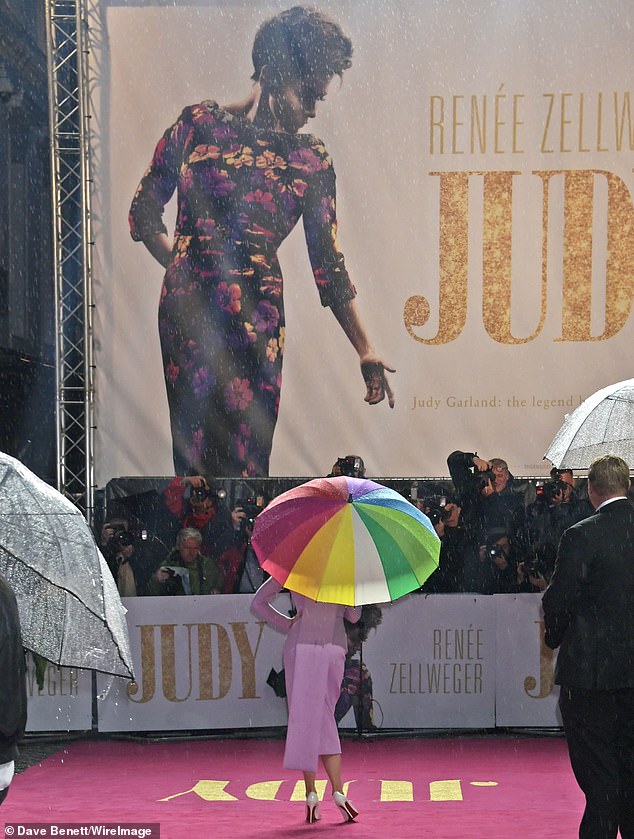 Come rain or shine: Despite the inclement weather, Renee brought the Hollywood glamour

In Judy, Renee recreates the last year of Garland’s life as she prepared for a series of shows in London in early 1969.

Dogged by ill health, money worries and addiction to pills, the appearances were mostly disastrous.

‘It’s hard to fully appreciate the context of the circumstances that she was grappling with at the time,’ Renee recently said in an interview with USA Today.

‘And when you see what she was able to achieve in spite of the challenges she faced, then you can really see how extraordinary she was,’ she added. ‘It sort of sets her apart, in my opinion.’ 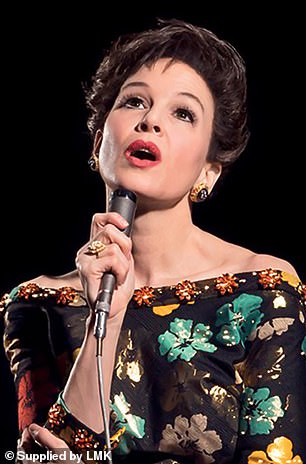 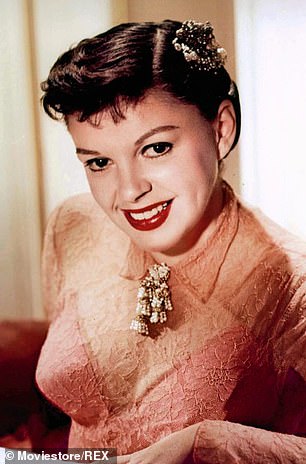 Uncanny: Renee, left, is getting rave reviews and Oscar buzz for her portrayal of Judy Garland, right, in the film, based on Peter Quilter’s musical play End Of The Rainbow 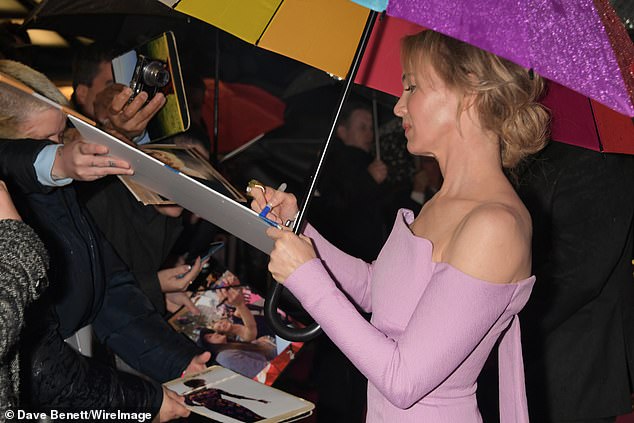 Give me a sign: Renee also gave time to her fans, signing numerous autographs on the carpet 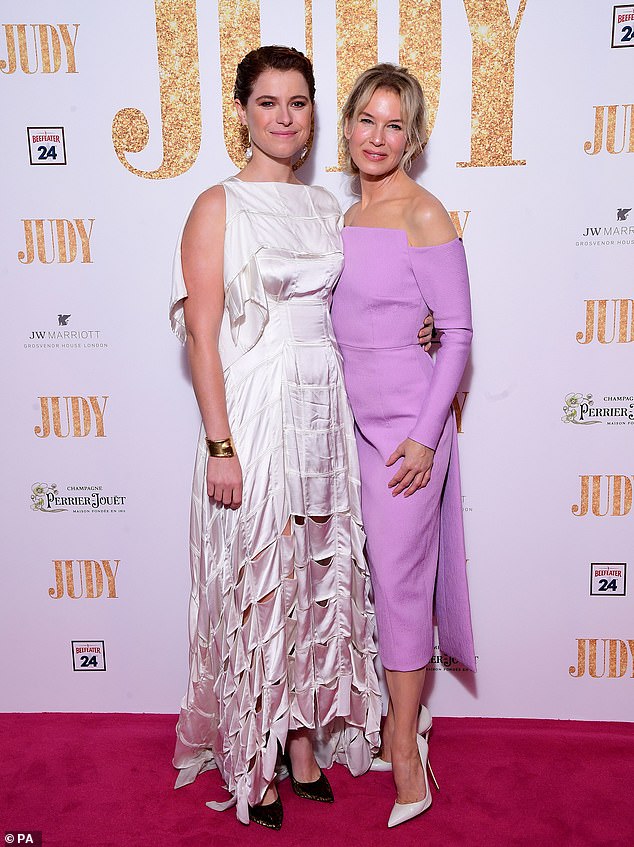 Co-star: Once she made her way inside the venue, Renee posed with her co-star Jessie Buckley

Breathtaking gown: The American actress also took the opportunity to show off her breathtaking gown, which featured a long panel descending from her back 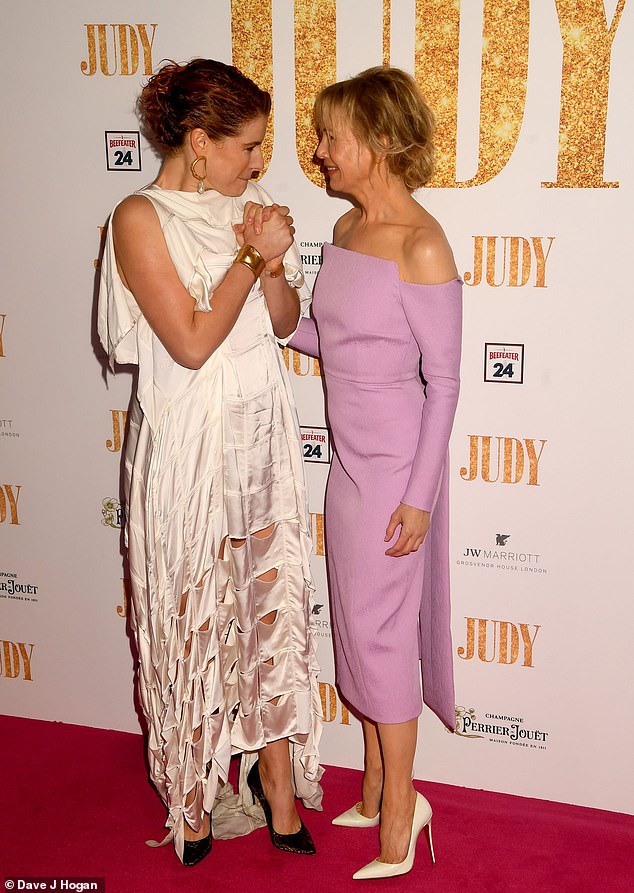 In a playful mood: Renee and Irish actress Jessie got playful with one another as they posed 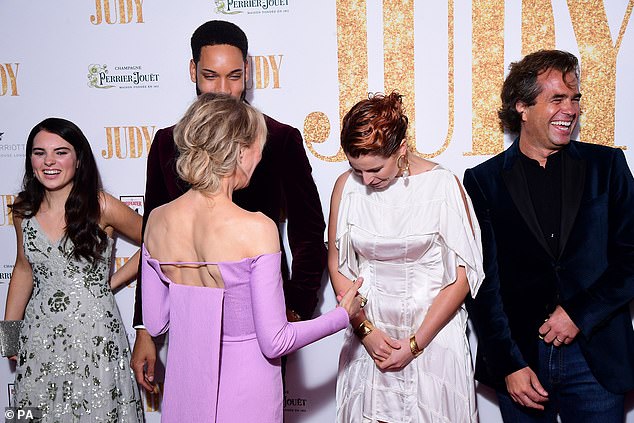 Enjoying a good chat: In between posing for countless shots, Renee briefly turned her back on photographers as she chatted away with her co-stars 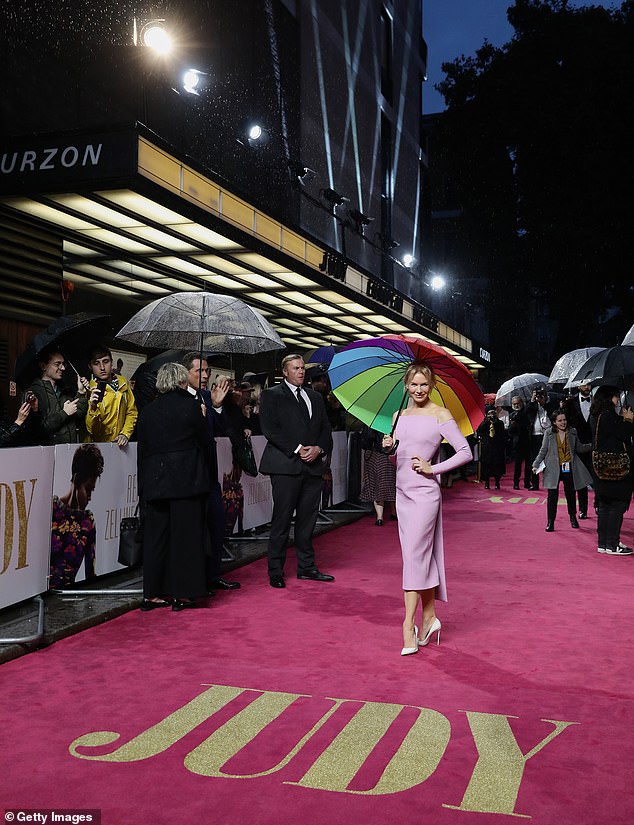 The star: Despite all of the chaotic activity around her, there was no doubt Renne was the star

Last week, Renee sat down for her first TV interview in six years, as she made an appearance on The Ellen DeGeneres Show to promote her movie.

Speaking of her busy schedule, she said: ‘I did Judy and as soon as I got home I did [Netflix show] What/If. It was so much fun to play. It was really fun. I looked at the script every day and I was like, “She said what?”‘

Of portraying Garland in the lead-up to her death, Renee added: ‘A lot of people think it was the tragic part of her life but in the context you can see how extraordinary she is… She is remarkable, one in a million.’

As far as transforming into the Hollywood, Renee revealed that she wore a ‘fantastic wig’ and used prosthetics – although she refused to specify where the prosthetics were applied, for fear of ruining the experience for viewers. 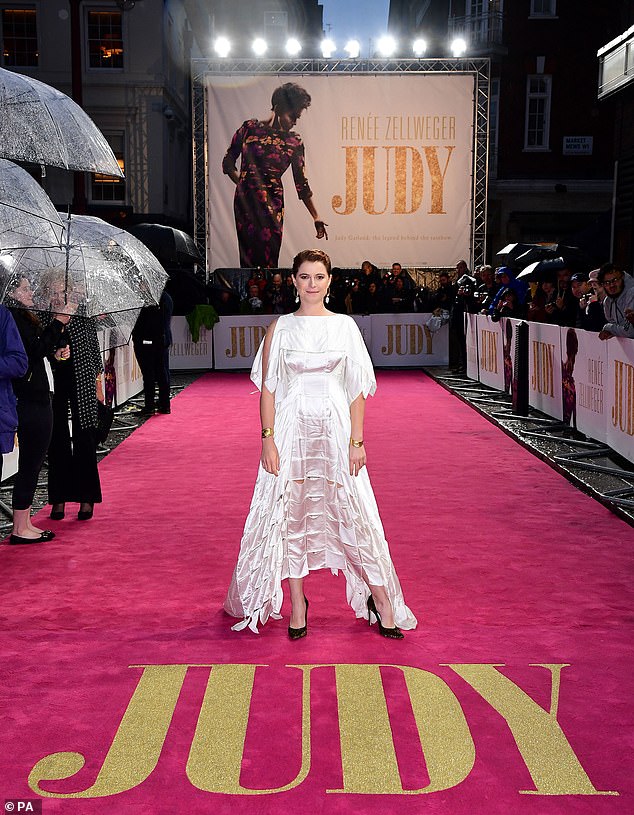 Stepping out in style: Jessie also stepped out in head-turning style for the European premiere

Ivory: The actress wowed as she arrived in an ivory gown with cutouts toward the flowing hem 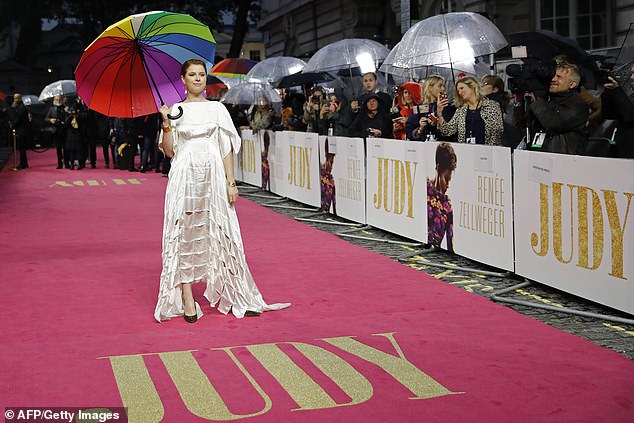 It’s all in the details: Jessie’s gown of choice featured split sleeves and an asymmetrical hem 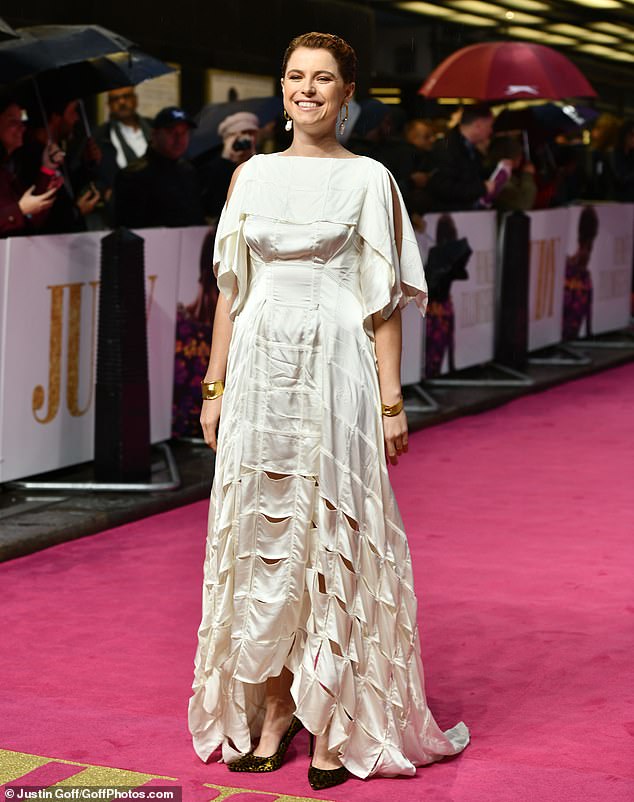 Standing tall: The star added extra height to her frame with a pair of patterned velvet heels 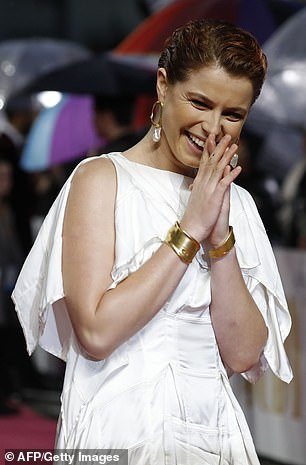 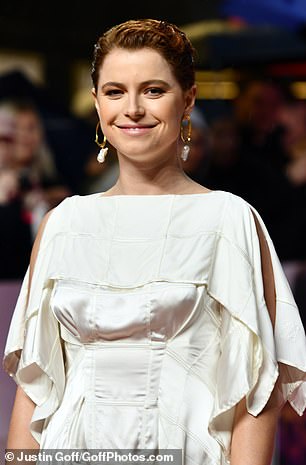 Golden girl: She added to her ensemble with a pair of chunky bracelets and drop hoop earrings 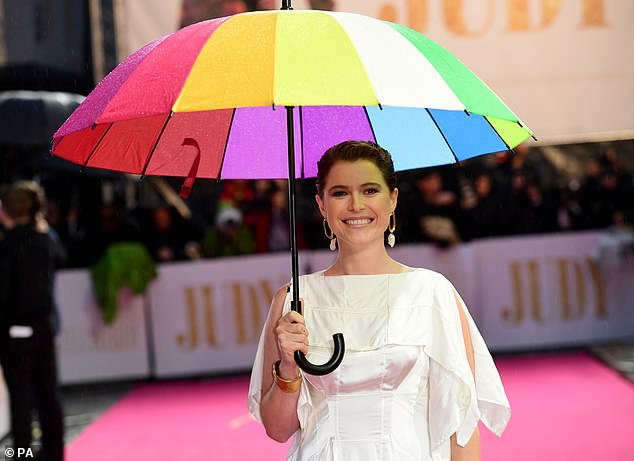 Locks: She wore her red tresses in a wavy bob, while keeping her makeup light and flattering

In March 1969, Garland married her fifth husband Mickey Deans, played in the movie by Finn Wittrock.

On June 22, Deans found Garland dead at their rented home in London’s Belgravia. She was 47 and died from an accidental overdose of barbiturates.

Judy is directed by British director Rupert Goold from a screenplay adaptation of Peter Quilter’s musical play End of the Rainbow by The Crown’s Tom Edge.

The film opened in the US on September 27 and will be unveiled in the UK on October 2. 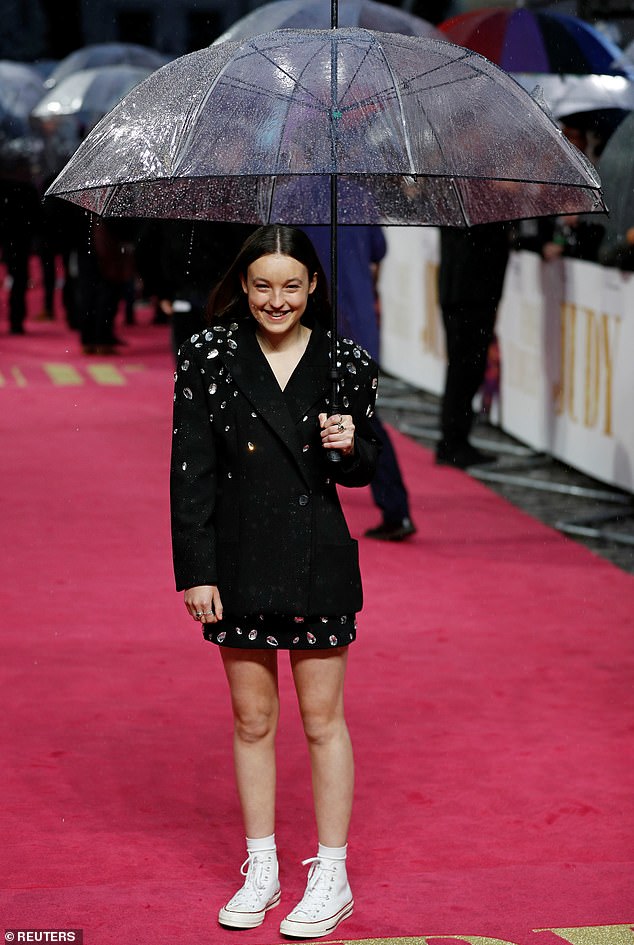 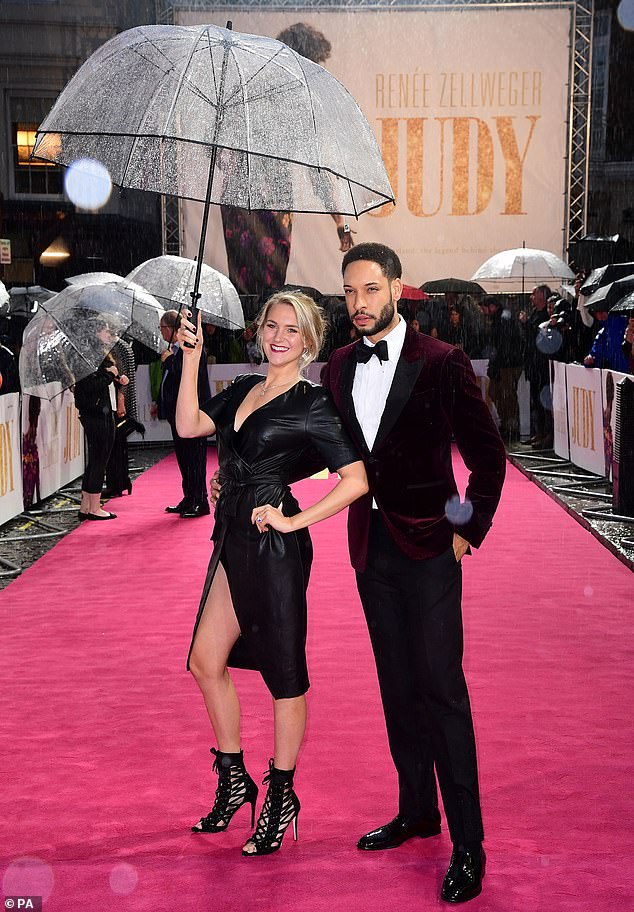 Covered: Natalie Herron and Royce Pierreson used a clear umbrella as the rain poured down 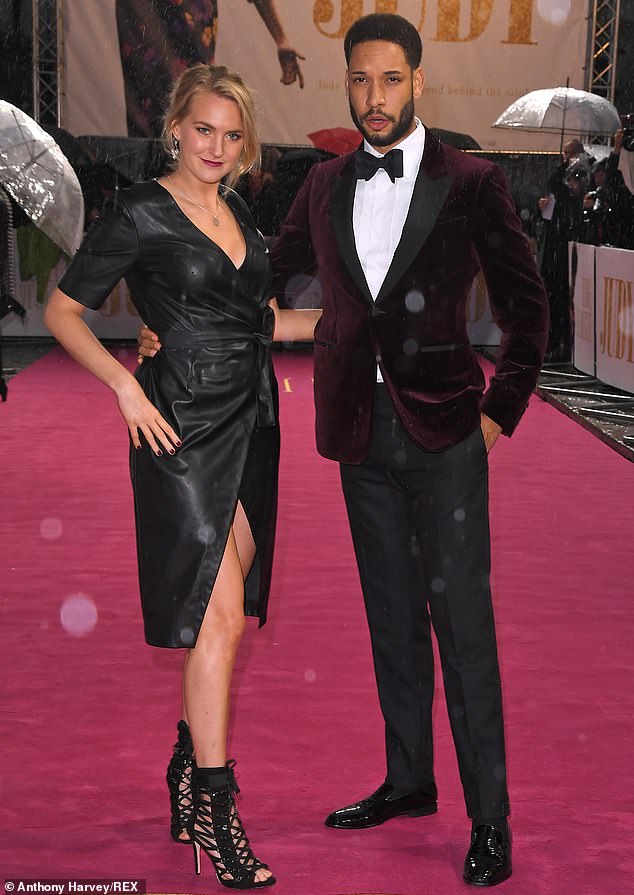 Taking one for the team: The pair soon did away with their umbrella to pose for photographers 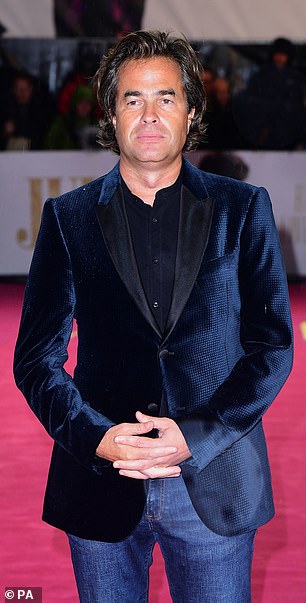 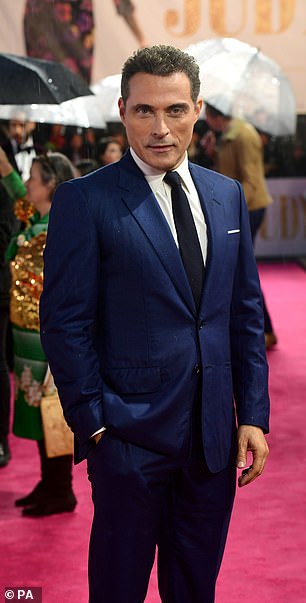 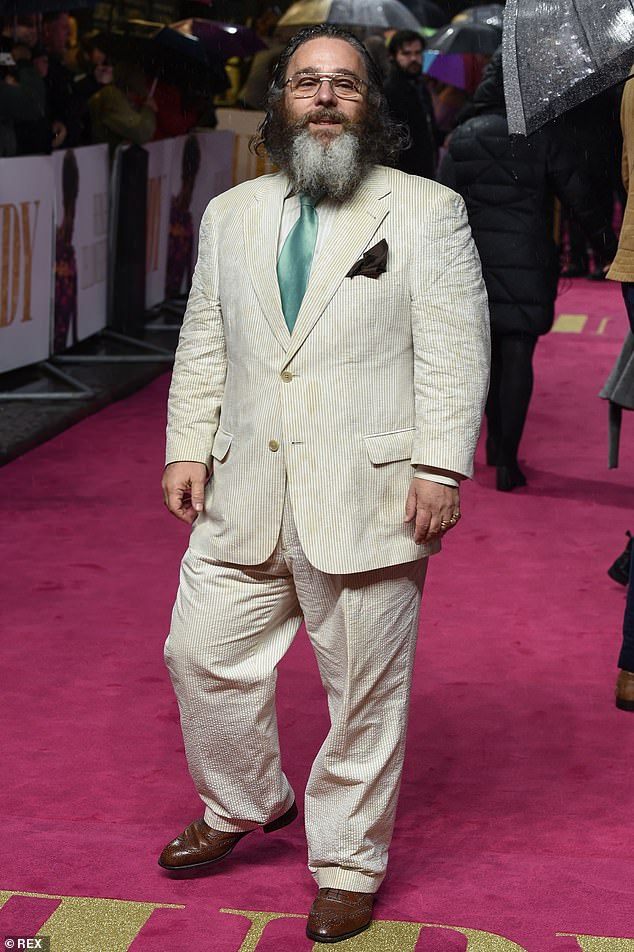 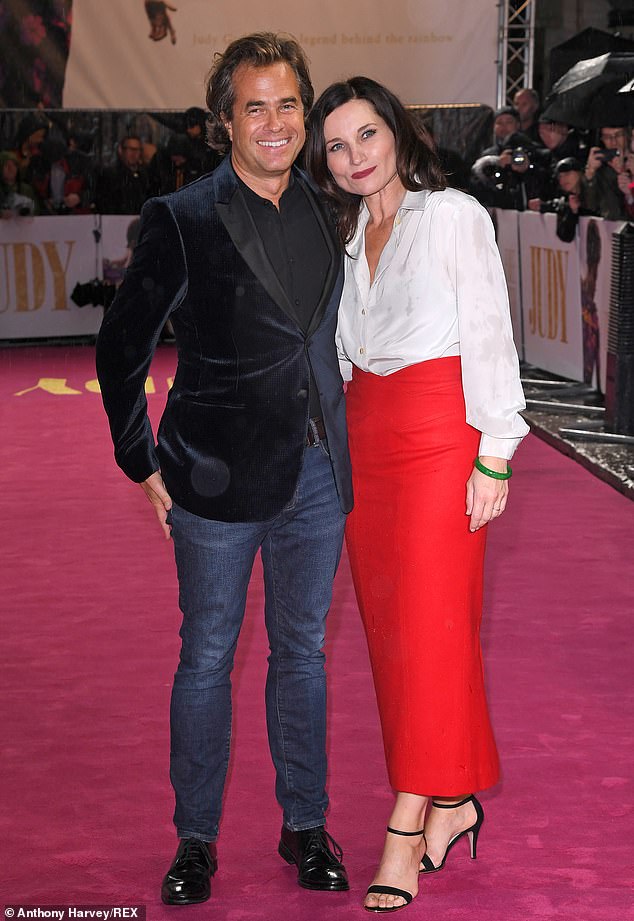 So in love: Film-maker Rupert was joined on the red carpet by his actress wife Kate Fleetwood 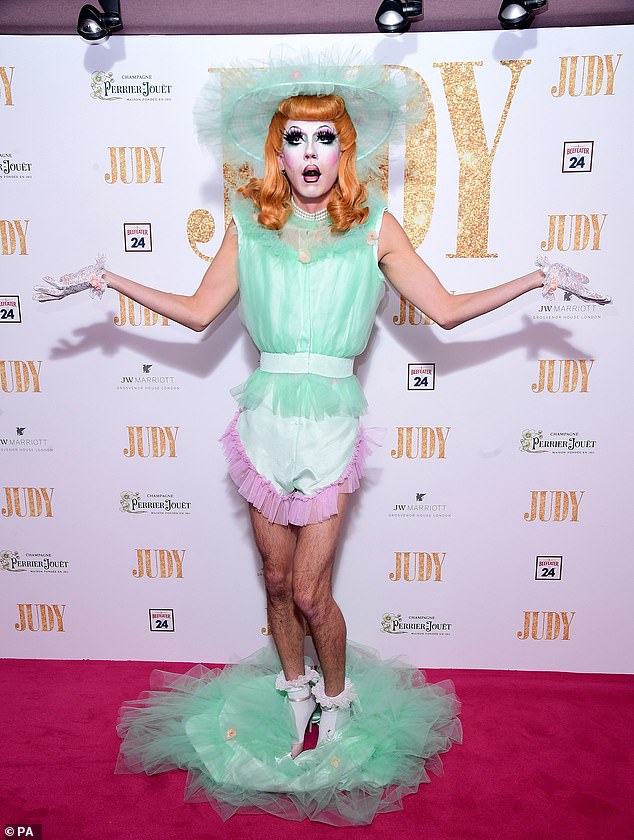 Oops! Popular drag performer ShayShay made a hard-to-forget appearance on the red carpet 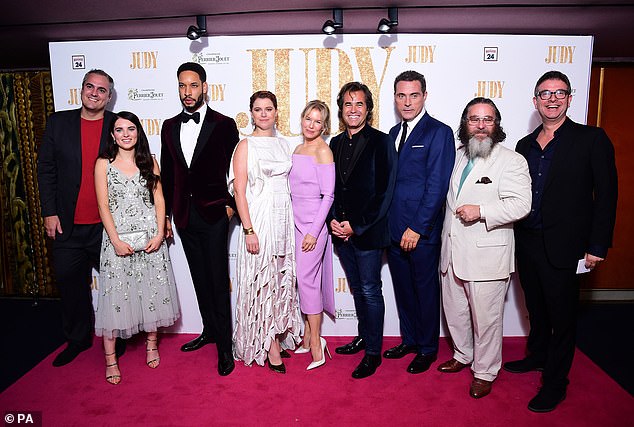