Renovation expert Cherie Barber has revealed the tiny tweaks that can add more than $10,000 in value to a property, after she renovated a facade in Maroubra, Sydney, in under a day.

The TV expert said people often neglect renovating their facade because they think it is going to take ages or cost them thousands of dollars, but you can make plenty of small cosmetic changes for a relatively inexpensive amount.

Cherie recently took on a heritage-style cottage in Sydney’s eastern suburbs with the brief of spending under $5,000 on the facade revamp.

After having a real estate agent over to value the cosmetic changes, it was estimated that she had added ‘more than double or $10,000’ to the value of the home.

So what changes did Cherie make?

BEFORE: Renovation expert Cherie Barber has revealed the tiny tweaks that can add more than $10,000 in value to a property, after she renovated a facade in Maroubra, Sydney, in a day 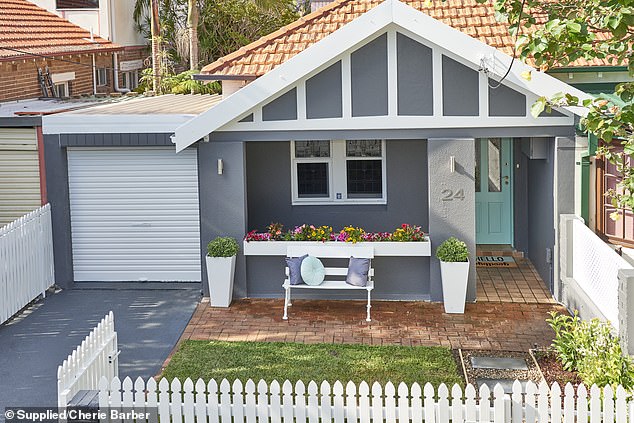 AFTER: Cherie said she spent just $5,000 on transforming this heritage-style property in Sydney’s eastern suburbs – and anyone can do it too

1. She fixed the entry way

The biggest issue Cherie told FEMAIL that she had with the property was its lack of an entryway unless you crossed both the driveway and the front lawn.

‘I created a gate that was closer to the front door by cutting a hole in the existing fence and re-purposing it into a gate,’ she told Daily Mail Australia.

Cherie said she also got rid of the ferns in the corner of the house, as they were ‘visually blocking’ the front door.

‘The bulk of the money was spent on the landscaping and getting rid of the existing palms to add new plants,’ Cherie said.

‘I wanted plants that were more heritage in feel and fitted with the property, instead of having this cute home with these slightly jarring modern palms.’

Cherie estimates that some $2-$3,000 was spent on this area, and she saved a little by avoiding adding concrete to the pathway leading to the front door. 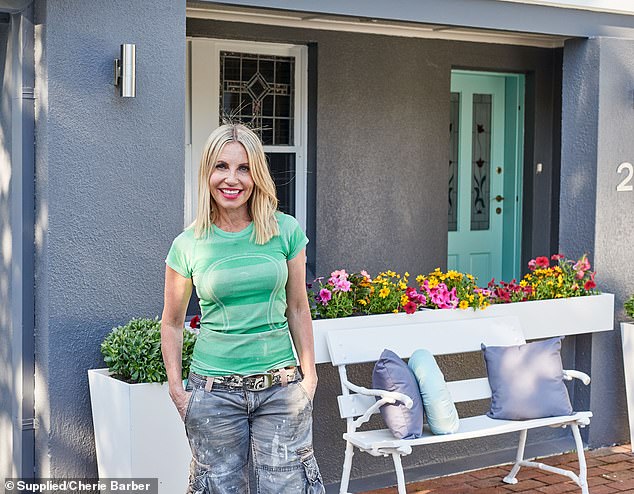 AFTER: One of the changes that Cherie (pictured) made was painting the front door, which she said is one of the areas where you can add a ‘pop’ of personality

2. She changed the front door

How much should you spent on a cosmetic renovation?

* Cherie said a good rule of thumb is that you spend between 10 and 15 per cent of the property value on a cosmetic renovation.

* Of that, around two per cent should go on the facade alone.

Another of the big things on Cherie’s to-do list was dealing with the front door, which she said you couldn’t even see from the street before she carried out the renovation.

‘The owners had one of those screen front doors which keep out flies but don’t look very nice,’ she said.

‘On a facade, often looks are more important than practicality.

‘We removed that door entirely and then just painted the existing front door a bright turquoise colour.’

Cherie said the front door is the one area of your property where you could and should add a ‘pop’ of personality.

‘A brightly-coloured front door looks inviting and fun, and it’s good to be able to see it from the street,’ she said.

3. She painted the exterior of the home

One of the cheapest and best ways you can instantly make your house look better is by painting it.

Cherie said she painted the entire home a darker colour, and added white features, beams and a white picket fence.

‘Everyone wants a white picket fence, it looks so crisp,’ she said.

‘And the best thing with paint is it’s so inexpensive, you can always paint over it a different colour if you decide you don’t like what you’ve done.’ 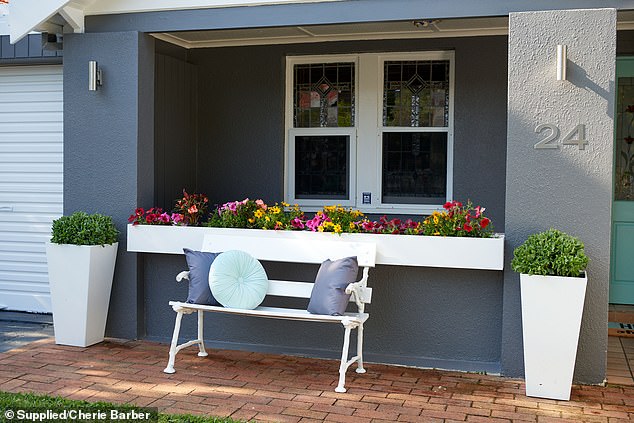 AFTER: Using a carpenter, Cherie said she added a custom-made planter box to the front of the house to add some visual interest (pictured) 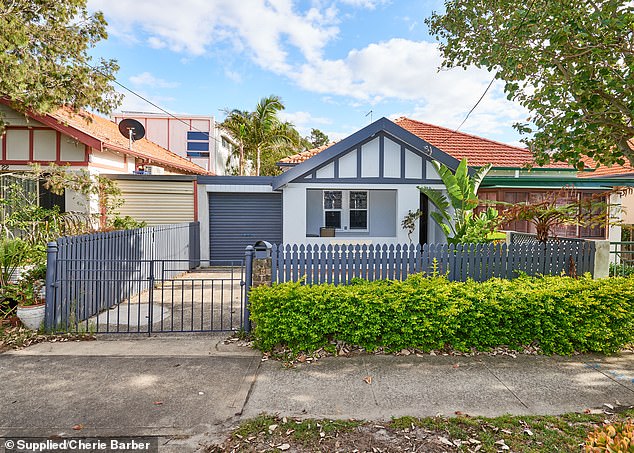 BEFORE: Before she did the renovation, Cherie said the colours of the property didn’t really tie together very well and the entire entrance-way was covered (pictured)

4. She added a planter box

Using a carpenter, Cherie said she added a custom-made planter box to the front of the house to add some visual interest.

‘This was one of the areas where I needed help from a carpenter to make the box,’ she said.

‘Again, I anchored it in visually to other areas of the property by painting it white.’

Cherie said having a ‘strategic colour scheme’ is one of the most important things to think about when carrying out a cosmetic renovation.

‘You might not think it, but tying things in together makes such a big difference,’ she said. 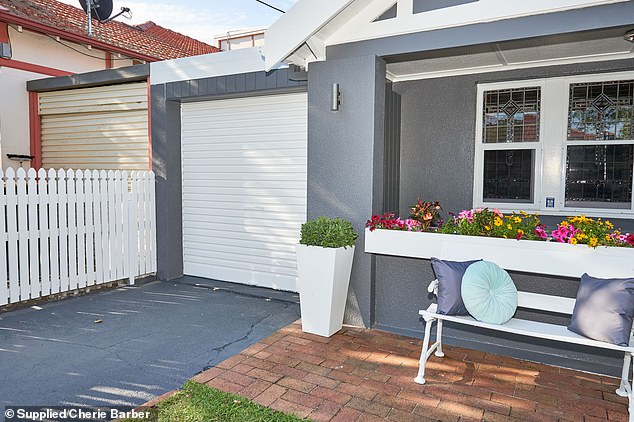 AFTER: Finally, the little styling touches like the letterbox, number sign, downlights and bench with cushions didn’t cost much, but have added a huge amount in value (pictured) 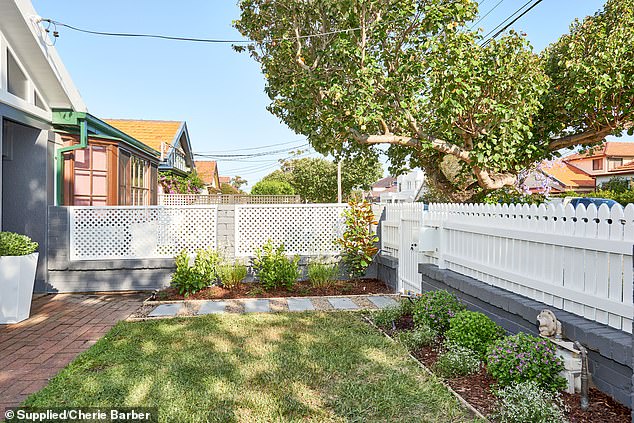 AFTER: Cherie said fixing something like your lawn (pictured) with sprinklers can also make a facade look infinitely better 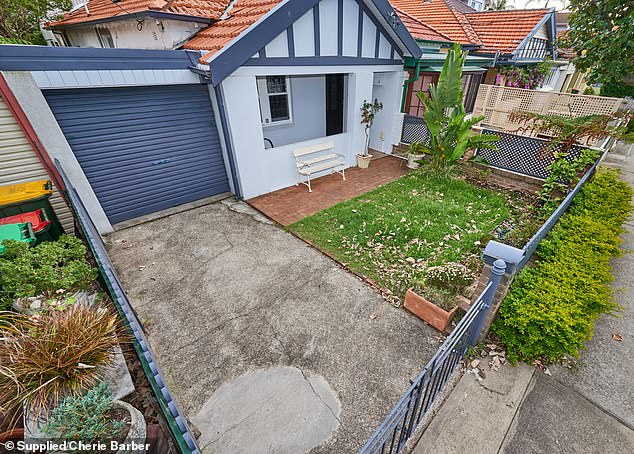 BEFORE: The property was lacking any kind of cute little styling touches that don’t cost much, but add a huge amount of value

Finally, the little styling touches like the letterbox, number sign, downlights and bench with cushions didn’t cost much, but have added a huge amount in value.

‘I don’t imagine someone will sit at that bench very often, but that doesn’t matter,’ Cherie said.

‘It’s not about that. It’s about adding street-side appeal, whether you’re trying to buy or sell.’

The expert explained that whether you like it or not, people often judge a house by its cover when they are looking to buy or rent.

‘The outside of your home and what it looks like says a lot about you,’ she added.

For more information about Cherie Barber, you can visit her website – Renovating for Profit – here.

What are Cherie’s tips for transforming your own facade on the cheap? 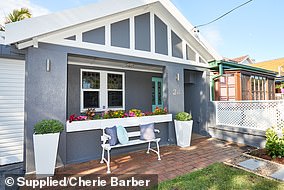 AFTER: She recommends getting going with your own external painting to completely lift a property (pictured)

1. External painting: Paint everything, as paint makes things look ‘fresh’ and Cherie often describes it as ‘liquid gold’. While the expert said you can paint the low areas yourself, she often recommends hiring a professional for the high spots you can’t reach. Paint the door a colour that ‘pops’ to add personality.

2. Landscaping: Cut back any unruly plants or anything that is visually blocking the entrance to the property. Strategically install new plants at points where they work better.

3. Fix the lawn: Get some lawn food on your lawn and get the sprinklers going to visually improve the status of the grass. A green lawn will instantly improve the look and feel of your facade.

4. High water pressure everything: Clean the entire property first and foremost with a high water pressure cleaner. Just washing your house can make such a difference as it often gets dusty and can be ash-y from the bush fires.

5. Think about maintenance: With everything you do, think about the person who will be living in it, whether that’s you or a renter. You don’t want to be installing a plant that needs to be cut every six weeks to keep it looking neat. Always think about the future maintenance.

7. Add styling touches: Little touches like a bench with cushions, lanterns and a new number sign really make a difference to the overall look and feel.